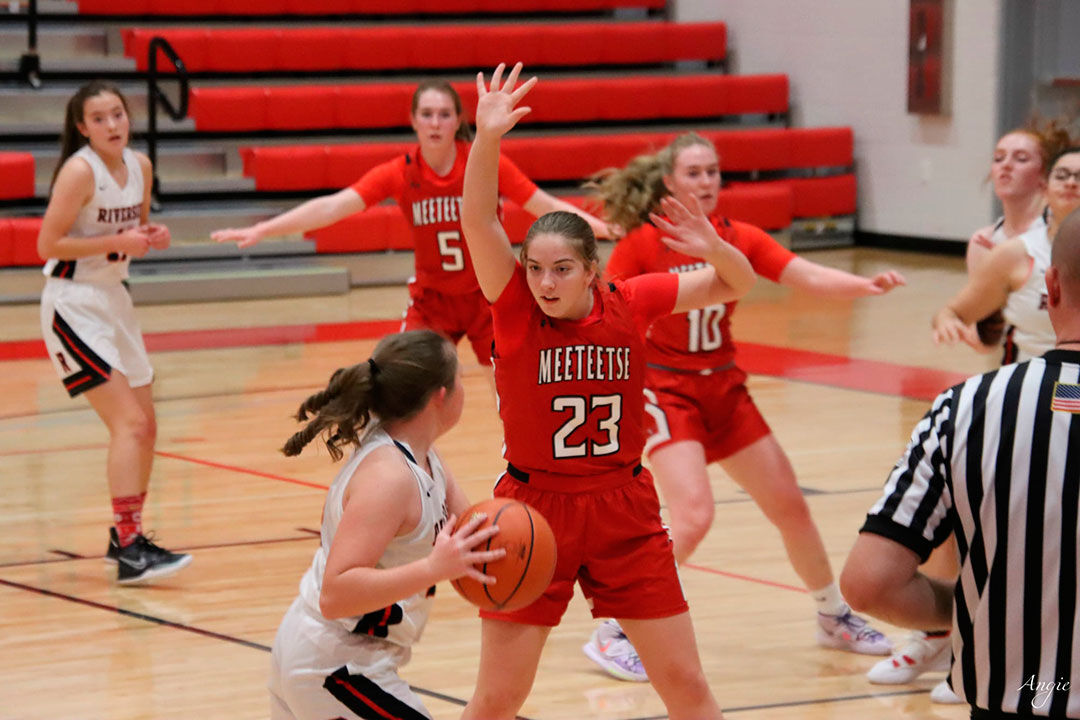 Sophomore Hallie Ogden guards a Riverside player last week. Ogden slotted into the starting lineup after an preseason injury to junior Miya May sidelined her for the year. (Photo by Angie Erickson) 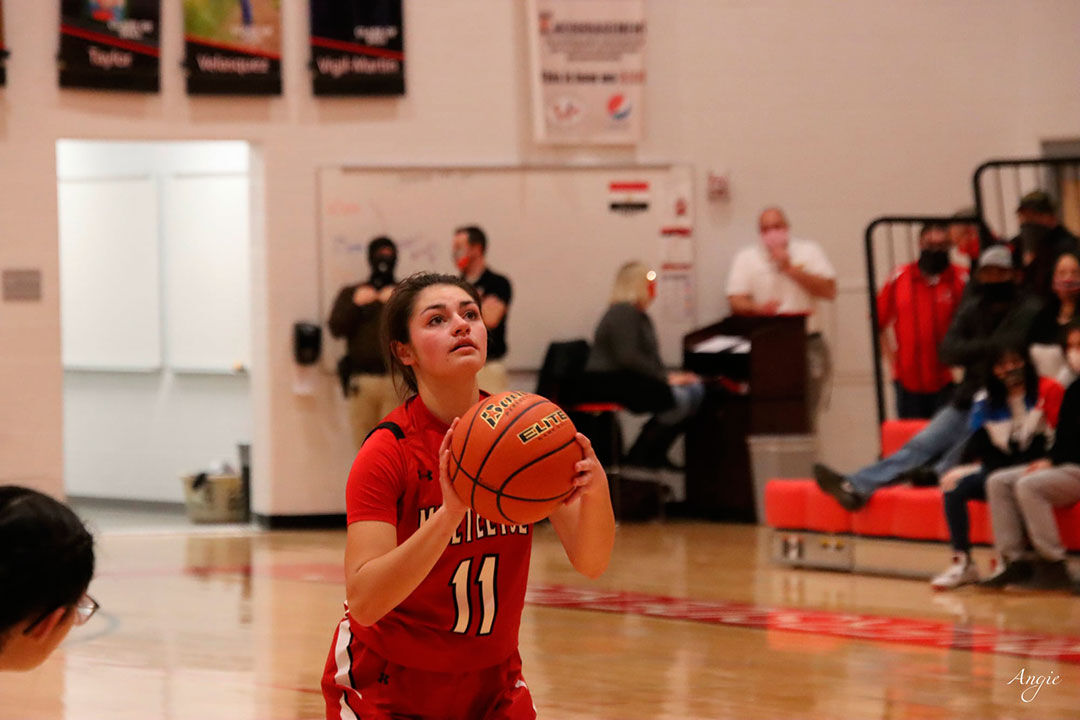 Junior Delanie Salzman lines up a free throw against Riverside. The lead guard for the Lady ‘Horns, Salzman is averaging 6.8 points per game this season. (Photo by Angie Erickson)

Sophomore Hallie Ogden guards a Riverside player last week. Ogden slotted into the starting lineup after an preseason injury to junior Miya May sidelined her for the year. (Photo by Angie Erickson)

Junior Delanie Salzman lines up a free throw against Riverside. The lead guard for the Lady ‘Horns, Salzman is averaging 6.8 points per game this season. (Photo by Angie Erickson)

The Lady Longhorns have faced many challenges this season. Injuries? Check. Short rests? No problem. Bigger schools? No matter.

The Meeteetse girls go into the holiday break with a .500 record after splitting their games last week against 2A Riverside and 2A Wright.

The Lady ’Horns kept it close n the first quarter, but an epidemic of turnovers turned the tide the way of the 2A Rebels, who defeated Meeteetse 65-27 on Friday night.

“We got on our heels,” said coach Ernie May. “Basin [Riverside] was a good team.”

Riverside (1-1) held the Lady ’Horns in check after the first quarter, allowing just 15 total points in the second and third periods and holding Meeteetse scoreless in the fourth quarter.

“You have to give them a lot of credit,” May said. “They pressed us… We threw the ball away too many times.”

Senior Lexi Allen was a bright spot in the game for the Lady ’Horns, playing well on defense against the Rebels’ skilled sophomore Caroline Schlattmann.

“She’s definitely tough and it just made me realize I need to be tough back,” Allen said.

The next day, Meeteetse pulled out a win against the Panthers, 41-36.

Junior Delanie Salzman turned in one of her best performances of the season in the victory, running the point for the Lady ’Horns and keeping the ball moving.

“I knew I had to step up for my team after our big loss to Riverside,” Salzman said. “I definitely know I can still play better than how I played this weekend in both games.”

Salzman added seven points and four assists, but the bench helped clinch the win for the Longhorns.

After the senior pair of Abigale and Samantha May got into early foul trouble, the bench had to step up.

“All the girls off the bench played great,” coach May said. “Everyone scored except Bell[a Van Auken] and Bell played some great defense and gave Delanie a break.”

“I push myself harder than anyone and I felt like I did pretty good,” Ervin said. “We all work well as a team and because of that we push each other to do our best. The win was definitely a team effort.”

The victory evened the season record for the Meeteetse girls, bringing them to 2-2 on the year heading into the holiday break, which is about where Coach May thought they would be.

“I knew playing these bigger schools would give us a good challenge,” he said. “At this point last year, we were 1-6, I think, after playing in the Carbon Classic and Shoshoni tournament.”

The team is gearing up for conference play, but May isn’t satisfied yet. He said he wants his players to clean up their turnovers, the team’s “Achilles’ heel” for the last several years.

The Lady ’Horns will return to action in the new year when they face off against the Powell JV squad on Jan. 2.