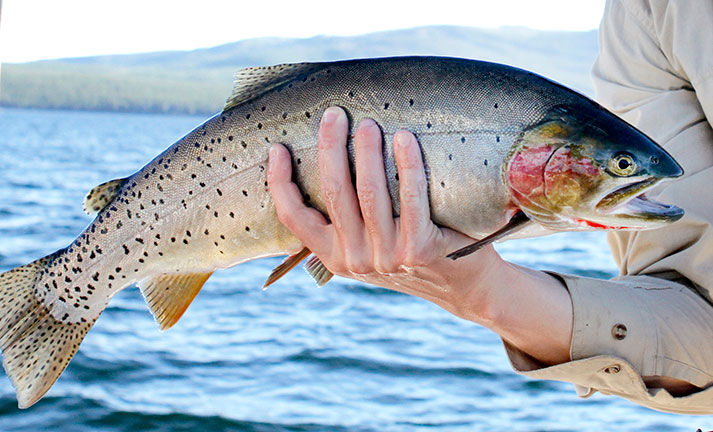 A Yellowstone Lake cutthroat trout before being released during a recent fishing trip.

A Yellowstone Lake cutthroat trout before being released during a recent fishing trip.

The expensive, determined effort to make cutthroat trout king of Yellowstone Lake again by diminishing the impact of lake trout is working.

What was once a 90-10 percent dominance by the voracious lake trout is now closer to 50-50 in Yellowstone National Park’s signature body of water.

At a recent national outdoor writers conference in Billings, Sweet played the lead role in round-table and panel discussions explaining how the iconic cutthroat trout is making a comeback in the lake.

However, Sweet stressed that the war has not been won.

Likewise, Yellowstone National Park Superintendent Dan Wenk said it is too soon to declare any kind of victory.

“I don’t want to get too far ahead of ourselves,” Wenk said. “It’s encouraging.”

Sweet is the Yellowstone Lake special project manager, devoting the last 8 1/2 years to overseeing a possible rebound of the cutthroat whose numbers were tumbling due to this invasive species.

Nobody knows who introduced lake trout to Yellowstone Lake, but the bigger, aggressive lake trout were well on their way to wiping out the native cutthroat that play a significant role in the ecology of the park.

In recent years, the Park Service, aided by donors, has spent $2 million annually to pay hired gillnetters to catch and kill as many lake trout each summer as possible. The figure has topped 300,000 for about three years in a row and by the third week in July this year the number was approaching 200,000.

“It’s the right thing to do,” said Brett Prettyman, intermountain communications director for Trout Unlimited. “We (humans) screwed it up.”

Besides being an attractive species for anglers, the cutthroat’s healthy existence in the Park, swimming around not far beneath the surface, helped feed bears, osprey, eagles and other species.

Those groups had to seek other food sources.

“It’s truly an ecosystem impact,” Sweet said of the trout’s role. “It’s called a keystone species in Yellowstone. It really ripples through the ecosystem.”

Despite forcibly removing as many lake trout as can be trapped in the nets, Sweet said there is no way every single lake trout can be eliminated that way.

Other weapons are now being tried. Lake trout are being captured and having telemetry gadgets inserted. Then, when the spawning season begins in late summer, officials can follow them to the spawning beds and kill the fry through electroshocking.

Prettyman called those being killed in the lake “sacrificial fish” in the cause of restoring the cutthroat.

In several other parts of the country lake trout are an avidly sought fish by fishermen.

“It’s a good fish in the wrong place,” Sweet said.