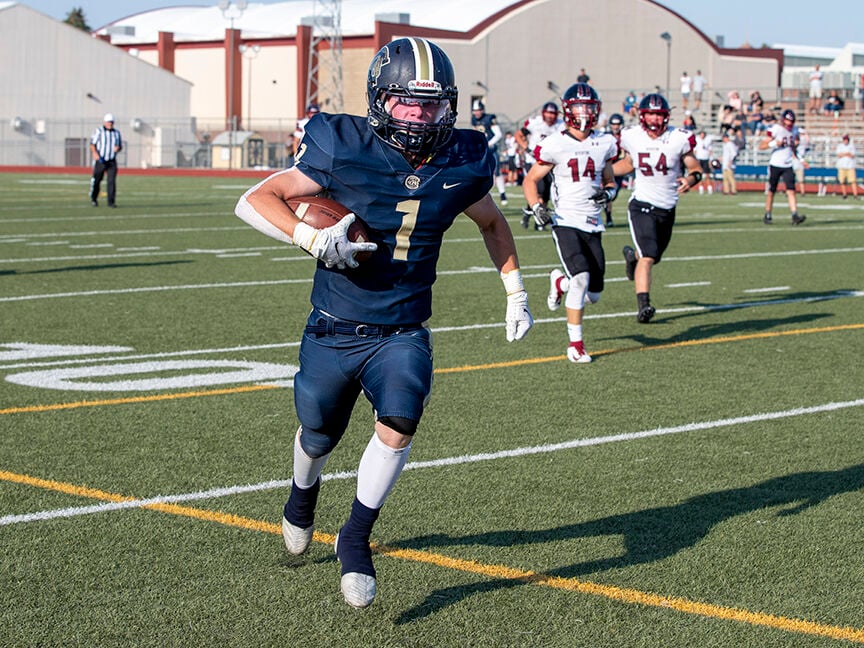 Cody Phillips runs in one of his touchdown receptions. 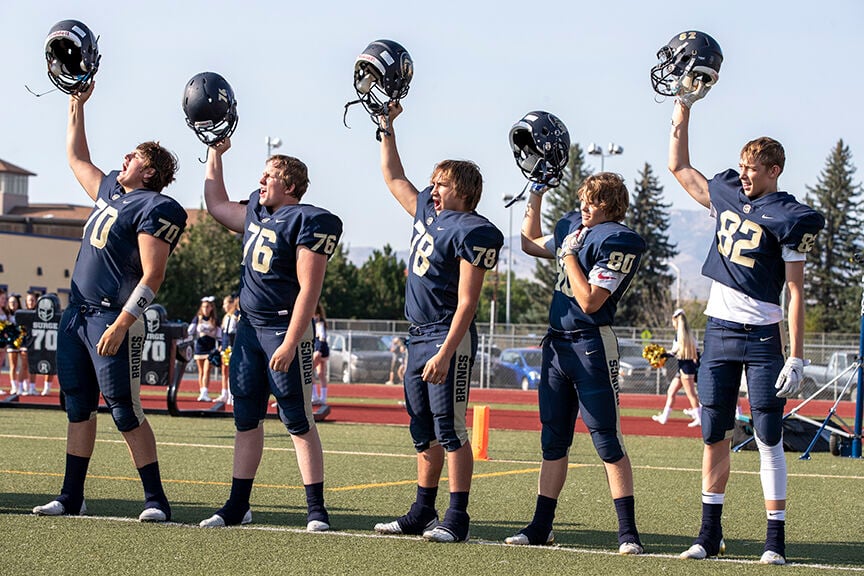 Cody players take off their helmets for the crowd. 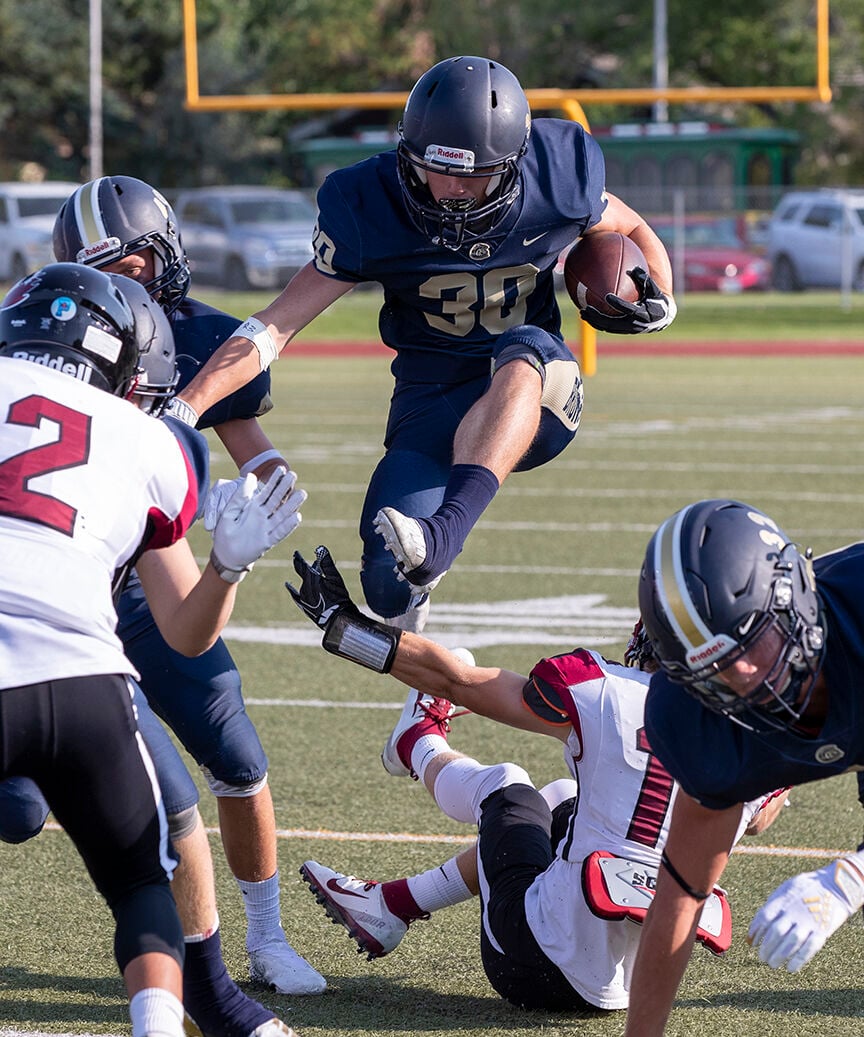 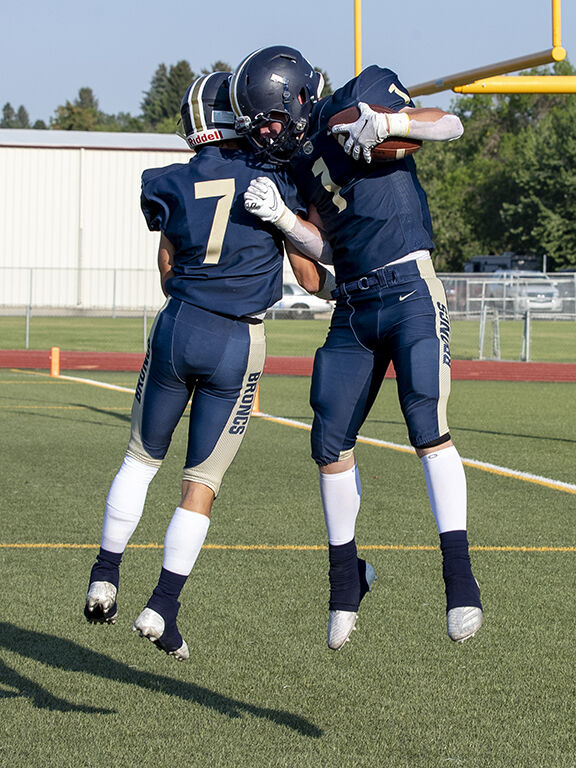 Chaz Cowie celebrates with Cody Phillips after one of Phillips' touchdowns. 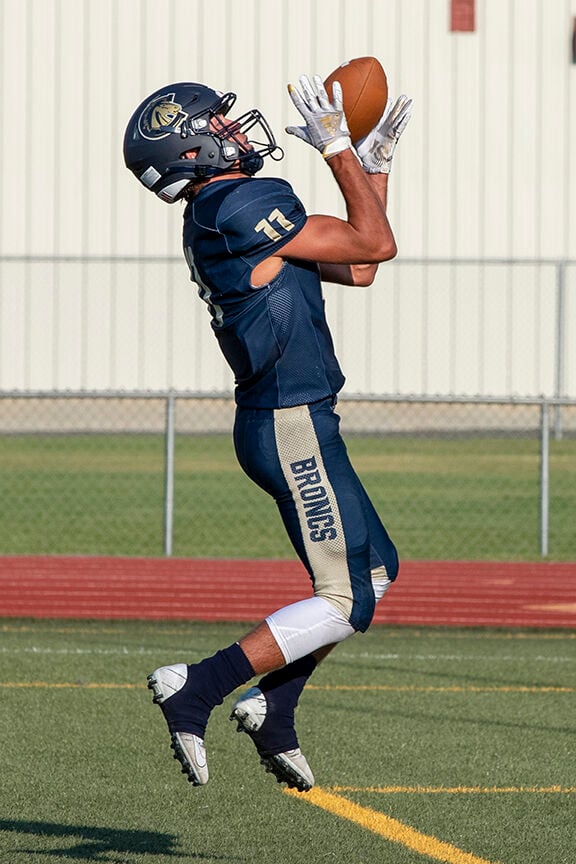 Drew Trotter recovers a blocked punt in the end zone for a touchdown. 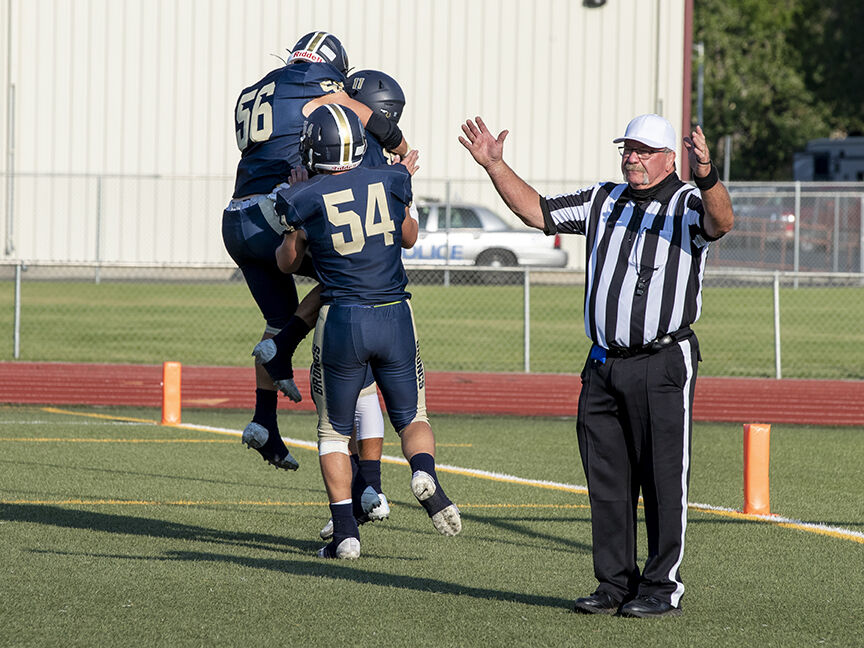 Daniel Gorman (56) and Jace Grant (54) celebrate with Drew Trotter after Trotter snagged a blocked punt for a score. 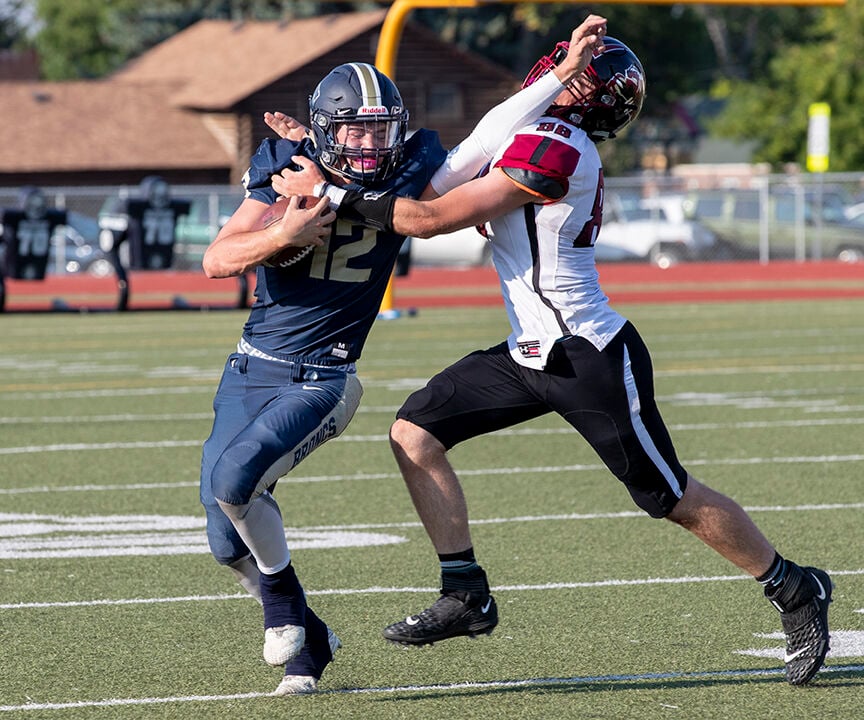 Caleb Pryor pushes by a defender. 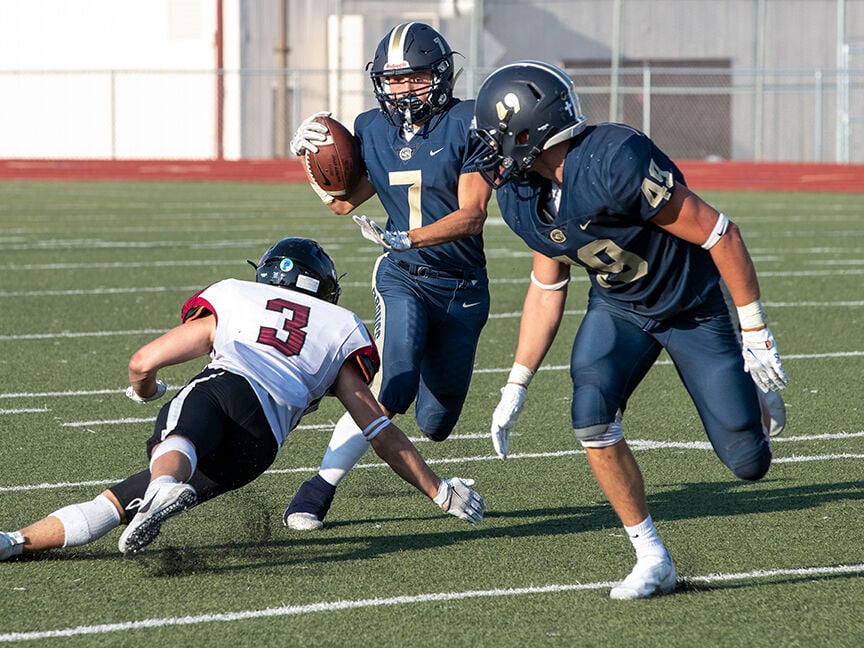 Chaz Cowie maneuvers past a defender. 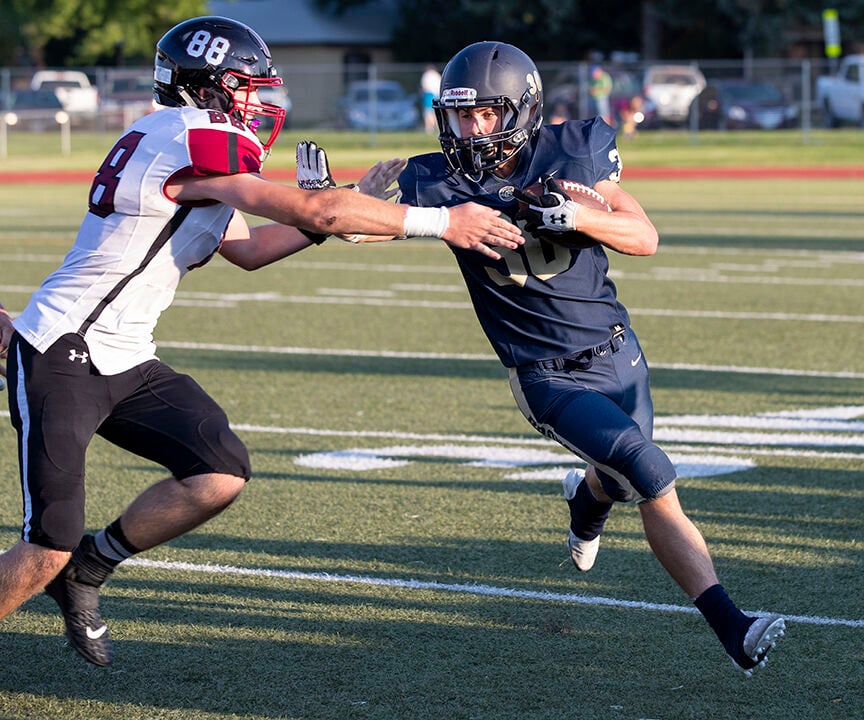 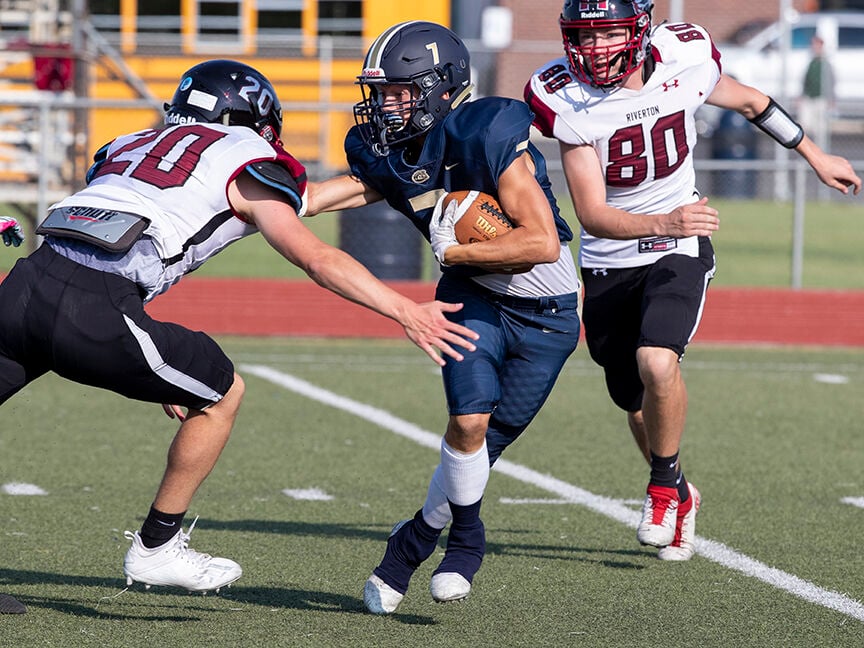 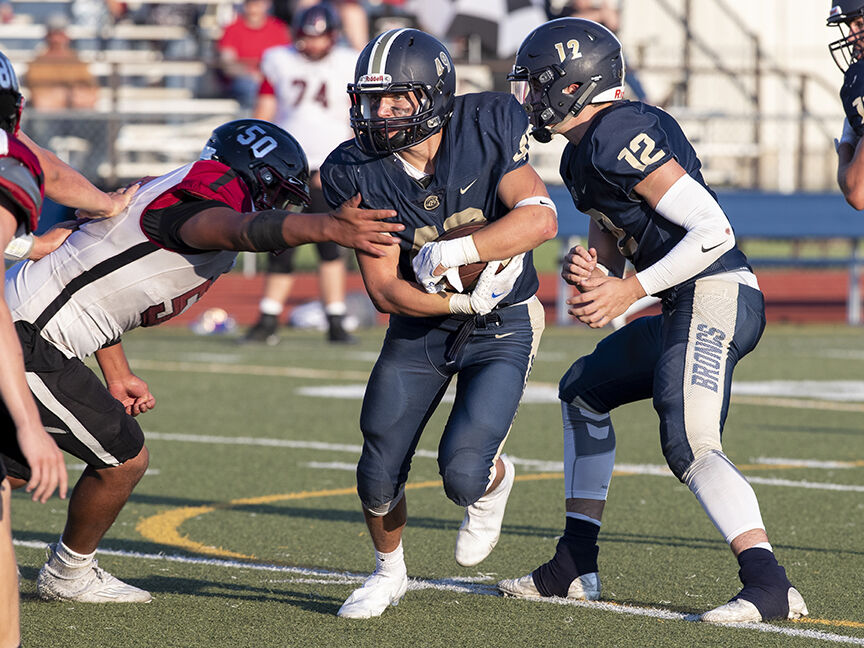 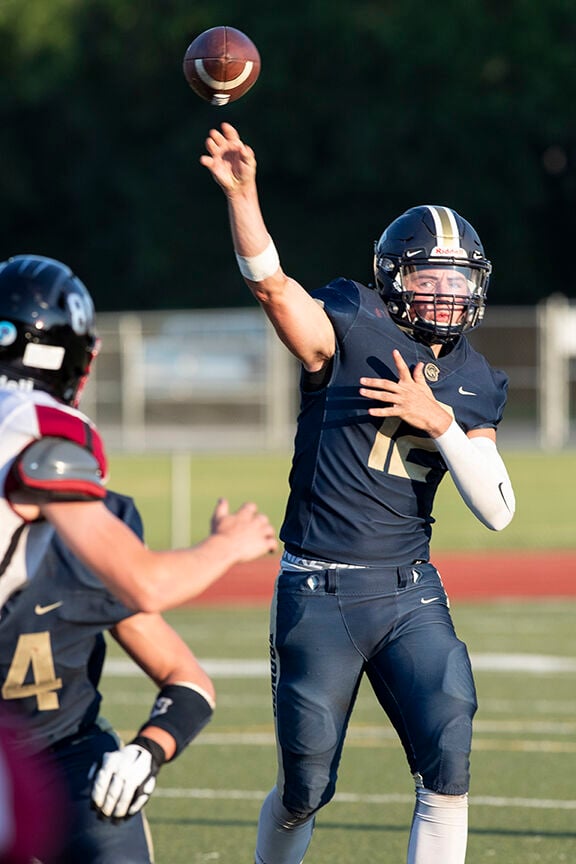 Cody Phillips runs in one of his touchdown receptions.

Cody players take off their helmets for the crowd.

Chaz Cowie celebrates with Cody Phillips after one of Phillips' touchdowns.

Drew Trotter recovers a blocked punt in the end zone for a touchdown.

Daniel Gorman (56) and Jace Grant (54) celebrate with Drew Trotter after Trotter snagged a blocked punt for a score.

Caleb Pryor pushes by a defender.

Chaz Cowie maneuvers past a defender.

Caleb Pryor has a host of weapons at his disposal, whether to hand off, pitch or throw.

The new Cody quarterback deployed his arsenal Friday to help lead the Broncs to a 44-23 win against Riverton to open Friday at Spike Vannoy Field.

Cody Phillips finished with three touchdowns, Pryor passed for a pair of scores, Drew Trotter ran for a touchdown and scored by recovering a blocked punt in the end zone. Nic Talich racked up 119 yards rushing, blocked a punt, nabbed an interception and had a pair of tackles for loss to lead the way for the Broncs.

The Broncs have a run-first offense, but Pryor, who finished 7-for-10 for 94 yards passing, mixed in a pair of TD passes to Phillips to take some pressure off.

“It keeps them honest on defense and it’s another dimension to our offense that’s going to be lethal this year,” he said. “We’ve got a great rotation from receiver to wings. These guys are experienced and they know what they’re doing.”

They displayed that knowledge early.

Cody needed just three plays to score on its 74-yard opening drive, starting with a 42-yard run by Talich on a pitch and finishing with a 26-yard pitch to Phillips for the score. The PAT was blocked and Cody took a 6-0 lead.

The Broncs forced a three-and-out and then capped a nine-play drive with a 25-yard field goal for a 9-0 lead.

Late in the first and early in the second quarter Cody’s defense held firm after a fumble gave Riverton the ball 23 yards from the end zone. The Wolverines made it to the 11 but no farther, settling for a field goal to cut the lead to 9-3.

Cody opened its next drive on its 44-yard line after Devyn Engdahl dove on a squib kick. After moving forward on a 5-yard penalty, Talich burst through the defense to the 12-yard line. On the next play, Trotter weaved through for a touchdown. Eli Pryor ran in the two-point conversion and with 9:31 left in the second quarter, Cody went ahead, 17-3.

On second down of Riverton’s next drive, Talich stepped in front of a pass and returned an interception to the Wolverines 21-yard line. Pryor passed to Phillips on the outside and the senior ran in for the score. Jackson Gail converted the PAT and the Broncs led 24-3 with 8:40 in the second.

Phillips and Pryor have had plenty of time to get in synch.

“I know I like to be one of the people to execute pass plays,” Phillips said. “Caleb and I have been playing together since middle school, we’ve been friends, and that helps.”

Having scored multiple times on offense and set up a touchdown on defense, Cody’s special teams came in to tip the scales. With Riverton stymied on its 10-yard line, Talich blocked the fourth-down punt and Trotter recovered it in the end zone for another score. The PAT was no good, but Cody led 30-3 with 7:12 left in the half.

Even up 27, Trotter said they didn’t rest easy.

“Our mentality is we can never be satisfied,” he said. “I’m happy with how we looked as a team, although we have things to fix.”

The Broncs forced another three-and-out and, starting at their 42-yard line, capped a 10-yard drive with an 11-yard pass from Pryor to Phillips after being pushed off the 1-yard line due to a holding call on second down.

The Broncs couldn’t keep Riverton from the end zone for the full quarter. The Wolverines responded with a nine-play, 71-yard drive finishing with a pass from quarterback Damon DeVries to Tanner Johnson from 11 yards out for the score.

It was a spark of life from the Riverton passing game, but for the most part Cody kept it in check.

“They had big receivers – we watched them on film,” Cody cornerback Nathan Wilson said. “We knew that would be a part of their game plan and we did well.”

He said to block the bigger receivers, the key was to make whatever play you were able, whether a deflection or a tackle.

With 54 seconds to go, Cody came close to another score, but Gail’s last-second, 35-yard field goal was blocked and the Broncs led 37-9 at the half.

Talich had surpassed 100 yards rushing by halftime and Cody was fully in control.

“I thought it was good, especially the first half,” coach Matt McFadden said. “We knew we were going to be fast, athletic and young and I think we saw some of those things.”

In the third quarter, Cody forced a Riverton punt after a promising 8-play drive by the Wolverines and then the Broncs ate up much of the quarter with a 15-play, 80-yard drive that ended with a 1-yard TD run by Wilson on an outside pitch. With a successful PAT, Cody led 44-9 with 2:50 left in the quarter.

Riverton had its own long, successful drive on its next possession, taking advantage of long pass completions and capping it with a run by Trayton Hyatt. A successful two-point conversion cut the Broncs lead to 44-17 with 10:05 left in the game.

The Broncs finished with many second-string players in the game, including Porter Lee taking the helm at quarterback.

Riverton scored late on a pass to Jared Lucas to make it 44-23.