Dave Eubank makes a life-saving effort through a war torn area of Mosul, Iraq to save a little girl who was caught in the crossfire. (Courtesy photo) 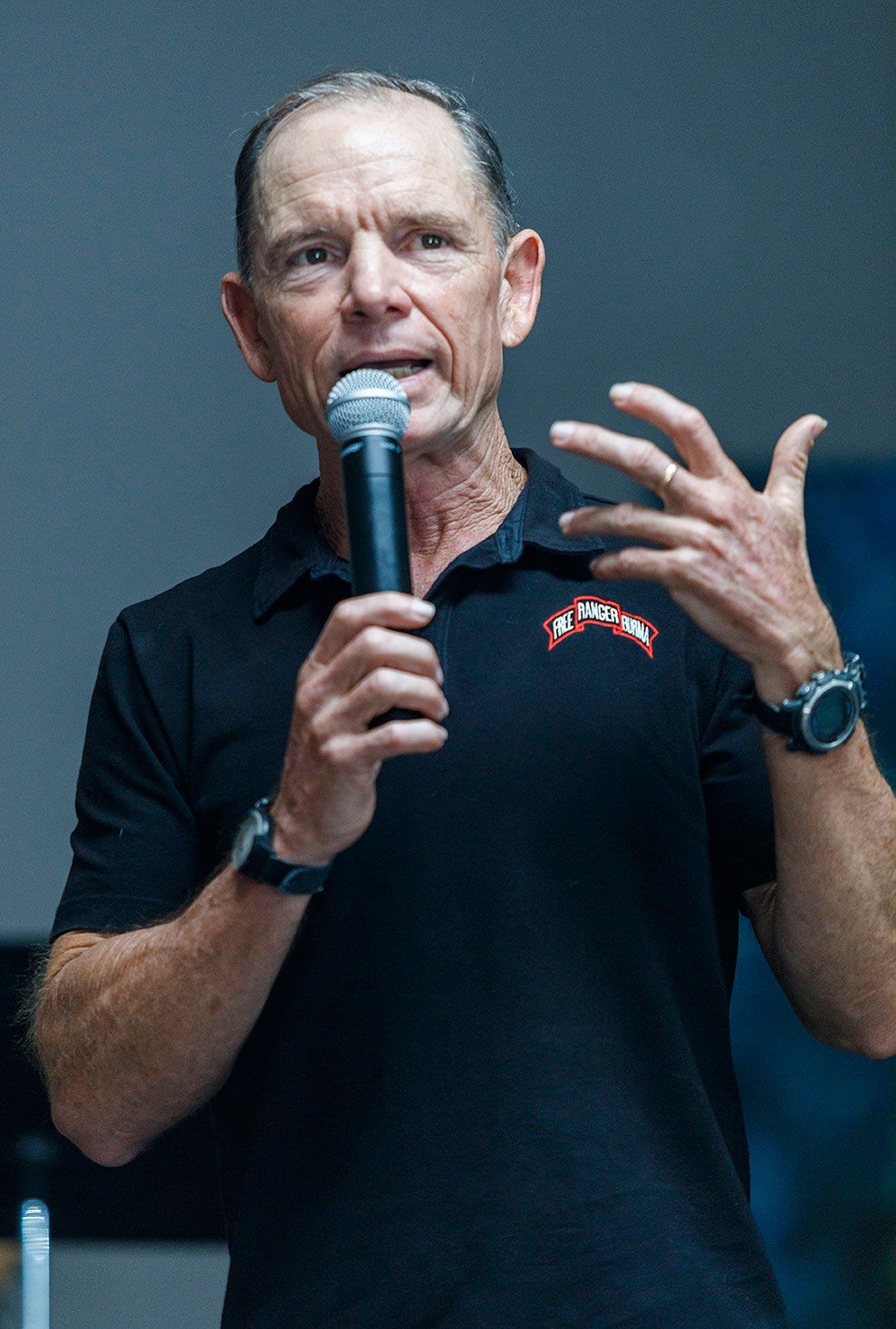 Dave Eubank speaks about how god influenced his decisions while aiding the wounded in war zones in Syria and Burma at Streams of Life Church on Aug. 9. 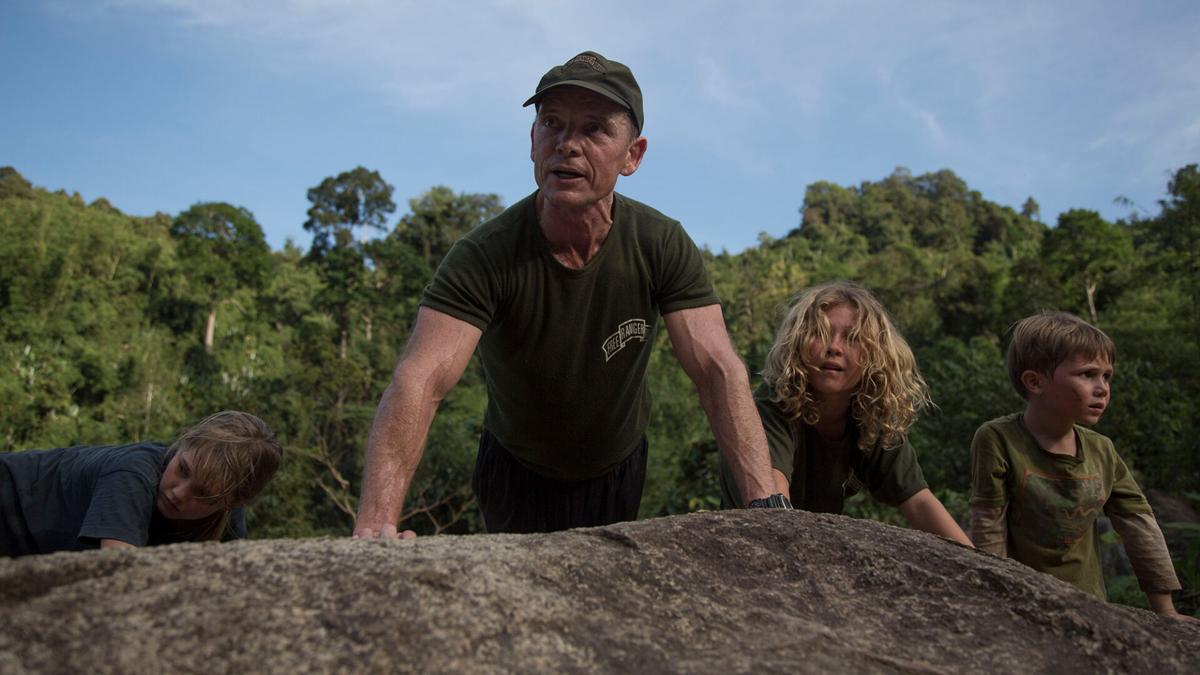 Sahale (from left), Dave, Suuzane and Peter Eubank survey a view while serving with the Free Burma Rangers in Burma. The FBR movie recently premiered at the Big Horn Cinemas. (Courtesy photo)

Dave Eubank makes a life-saving effort through a war torn area of Mosul, Iraq to save a little girl who was caught in the crossfire. (Courtesy photo)

Dave Eubank speaks about how god influenced his decisions while aiding the wounded in war zones in Syria and Burma at Streams of Life Church on Aug. 9.

Sahale (from left), Dave, Suuzane and Peter Eubank survey a view while serving with the Free Burma Rangers in Burma. The FBR movie recently premiered at the Big Horn Cinemas. (Courtesy photo)

The Eubank family has never performed any of its charitable deeds for publicity or notoriety. Rather, they typically let their actions do the speaking for them.

“The miracles God gives is for everybody, not just us,” Karen Eubank said. “But I want everybody to share in God’s full meaning and focus in our lives.”

For nearly 25 years the family has been assisting vulnerable people under threat in war-torn areas around the world. Now, their story is being showcased in the 105-minute documentary “Free Burma Rangers,” after their multinational organization.

At some of the most tenuous moments of the movie, Dave Eubank reflected how he heard God speaking to him, helping him make decisions of courage and valor.

The Eubank family, who consider Cody one of their second homes, were in town enjoying their annual, month-long summer pilgrimage back to the States.

Dave Eubank and his family, Karen, Suuzane, Sahale and Peter, spoke before the Aug. 7 showing.

“Time is one of the most precious things we have because it’s going and who knows when we won’t have anymore of it, so thank you for taking your time to watch this movie, it means a lot to us,” Sahale told the audience.

The COVID-19 virus hasn’t slowed the family a bit other than making travel a little more challenging.

“In the countries we’re working, it’s a small concern and less deadly than other things they’re dealing with,” Dave said.

The film, directed by Chris Sinclair and Brent Gudgel, was shot over the course of eight years in Myanmar and Iraq. FBR has also performed work in Syria, Turkey, Iran, and Sudan.

While Dave helps train and engage the Rangers for live-action events, the rest of the family works the horse and mule teams, helps with medical duties, and performs community outreach through its Good Life Club.

After spending 18 years helping thousands of Burmese people displaced by the Burma Army, Dave heard the cries for help in Iraq in 2015.

Arriving in Iraq, the Eubanks found a country not unlike Burma.

“The Kurds became for us like the Karen people (region of Burma) were,” Dave wrote. “They opened their doors and welcomed us. They let us live with them on the front lines; they invited us into their homes.”

Their struggle was also similar, but here they were fighting ISIS, known for beheadings, rapes and other heinous acts.

The movie shows just a few instances of Dave and his FBR units springing into active war zones to save those caught in the crossfire.

Although they are not a militia, certain members do carry firearms for protection.

“We are not an attacking force, but we abide by this rule: an FBR member cannot leave someone who is in danger or run away if the people they are with cannot run away,” Dave wrote.

During the movie, when faced with scenes of incredible atrocity and anguish, Eubank expressed the temptation to attack and fire on those that were doing the same to them. But each time, he collected his Christian moral compass, and found a better way forward.

“Vengeance looks the same as justice but starts as hate,” Dave explained in the movie.

In early 2019, FBR provided help to people who lived in one of the last ISIS territorial holdings, a Syrian village called Baghouz.

“We worked to spread a message of love and not of hate,” Dave said. “We treated the wounded, hugged and prayed for those who allowed it, and through translators, shared about Jesus as the source of our open and love.”

One of the main players in the movie is Zau Seng, a 13-year Burmese FBR member and cameraman, who was killed in the fall of 2019 while documenting the attacks by Turkish forces on Syria.

“He filmed Burma Army airstrikes against civilians,” Eubank said. “He filmed on the streets of Mosul during ISIS’s final days there. And he filmed in Syria, showing the world that there has been no ceasefire.”

Although the Eubank family calls Thailand home, they are grateful to get a respite in America each summer. Karen Eubank said their Cody visit usually takes up the most time of all their stops.

As they do every year, the Eubank children competed at Nite Rodeo, the last six years using borrowed horses from the Smallwood family.

“They’re just really good people,” Ashley Smallwood said of the Eubank family. “They deserve a vacation and to have some fun. They do so much for everyone else. If we can help them out while they’re here so they can have a good time, then we might as well.”

Last weekend, Peter, 14, hopped on a horse and tried calf roping for the first time in his life.

Later this month, the family will engage a whole new rodeo when they move Suuzane, 18, and Sahale, 19, into their dorms at Texas A&M University. Suuzane hopes to be enrolled in the veterinarian program while Sahale is aiming to be a nursing major. The two also plan to compete on the rodeo and polo club teams while there.

“It’s a big benchmark in our trip,” Karen said.

After that, Peter, Karen and Dave will venture to Alaska and Washington, D.C. through October, with a possible Thailand trip after that.

“But that’s all pending due to the travel restrictions,” she said.

Karen couldn’t pinpoint exactly where they will be this upcoming year, but wherever life will take the Eubank family next, the Rangers’ life purpose to help others will never escape them.

She reflected on a recent photo taken of Burmese villagers planting in their muddy fields with Army artillery standing prominently in the background, a snapshot she finds emblematic of their mission.

“They will not give up the things God has given us,” she said. “He’s given us good things and we will not surrender.”

For more information on the group, documentary and book, visit freeburmarangers.org.