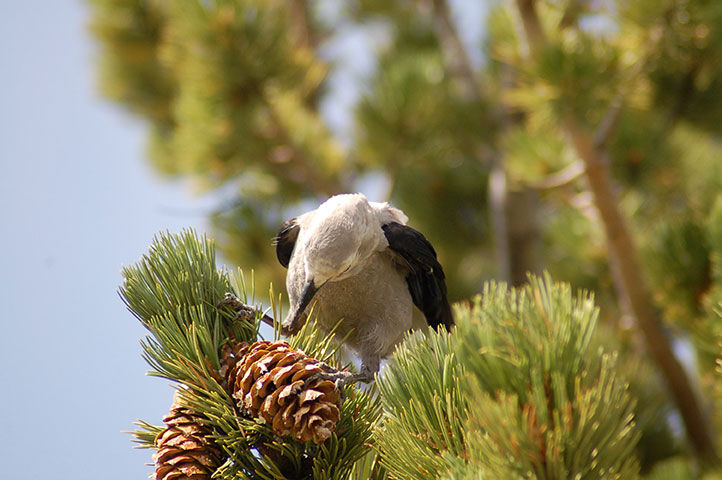 Nutcrackers harvest and transport the seeds of the high-elevation tree. 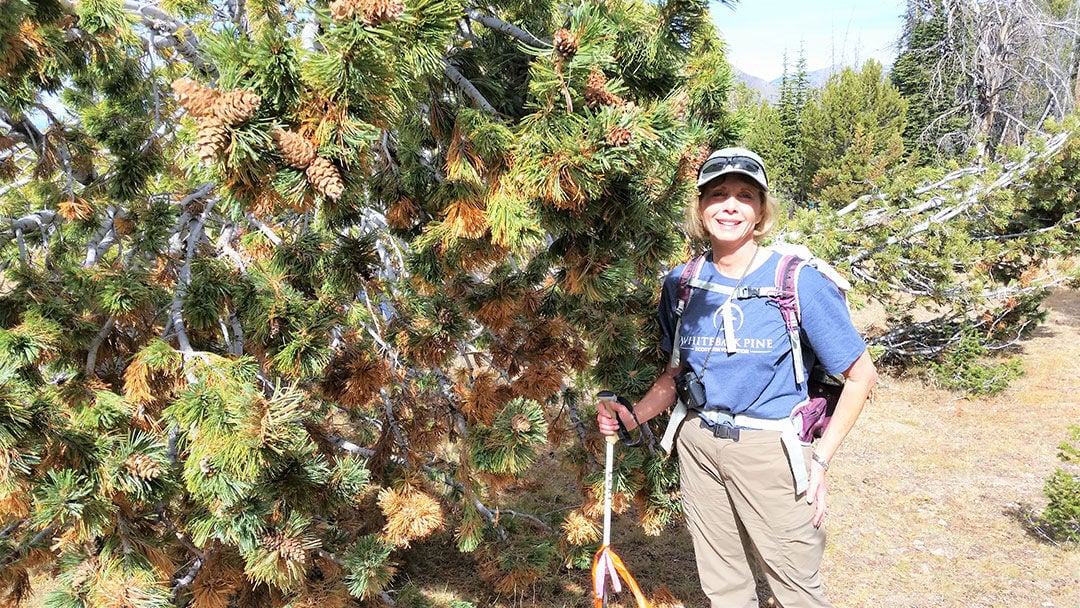 Diana Tomback runs a nonprofit dedicated to ensuring the whitebark pine’s endurance by working with multiple agencies on a recovery plan.

Nutcrackers harvest and transport the seeds of the high-elevation tree.

Diana Tomback runs a nonprofit dedicated to ensuring the whitebark pine’s endurance by working with multiple agencies on a recovery plan.

The unfinished tale of the whitebark pine in the Rocky Mountains includes a bad character that could spell its doom, but there’s a campaign underway to avoid that prospect.

“The villain in this story,” Diana Tomback related, is the whitebark pine blister rust, an invasive pathogen that’s fatal. However, having grown up in Hollywood, she’s a movie buff who prefers happy endings.

Tomback heads a nonprofit dedicated to ensuring the whitebark’s endurance by working with multiple agencies on a recovery plan. She shared the story of the high-elevation tree, its trajectory from health to potential listing as an endangered species, during a September Lunchtime Expedition program at the Buffalo Bill Center of the West. With a doctorate in biological sciences, she serves as a professor at the University of Colorado-Denver.

The tree’s tale begins in Siberia, when it was connected to Alaska via Beringia, the land bridge that facilitated the migration of flora and fauna until the connection disappeared 14,500 years ago. Tomback explained that the whitebark is “unlike most North American Pines” and, instead, related to the Siberian Stone Pine.

The tree’s distribution ranges from the U.S. to Canada, with 88% living on federal land, she said. Explorers Meriwether Lewis and William Clark documented the species during their 1803-1806 expedition across the West, while Clark is the namesake of the nutcracker that’s the whitebark’s partner.

“Over time, both species evolved adaptations to interact with one another,” Tomback said.

The pine can grow in mixed forests, at treeline and in high, cold, arid sites. At higher elevations, it can appear solitary and small.

“The whitebark is tough,” Tomback said. “Its seeds are large and wingless and highly attractive to nutcrackers.”

As opposed to winged seeds that rely on wind for limited dispersal, the whitebark’s develop in cones that remain closed, even when the seeds are ripe. The nutcracker has access to the cones, which grow horizontally and serve as perches for the birds.

When nutcrackers harvest the seeds, they place them in expandable throat pouches.

“A single nutcracker can carry more than 100 seeds,” Tomback said. The birds transport them to subterranean caches, where “the seeds can remain viable for years under the soil.

The cache sites are typically on south- or west-facing, steep slopes or bare rocky terrain, in open and closed forests or recent burns.

Using “highly accurate spatial memory,” the nutcrackers locate and retrieve the seeds for winter and spring nourishment, Tomback said. A study of a large seed crop on Mount Washburn in Yellowstone National Park revealed a cluster of seedlings two years later in 1991, “so the nutcrackers were doing their job.”

The tree promotes biodiversity, provides high-elevation habitat and nest sites and also supplies food to not just nutcrackers, but to bears, red foxes and the squirrels that raid the caches.

“The whitebark is important to our forests,” Tomback said. “It’s a foundation species,” promoting wildlife habitat by redistributing and retaining snow, providing shade that slows snowmelt, stabilizing the soil with its roots and reducing avalanche hazards.

Native American have used it for nutrition, she noted, eating the inner bark in times of starvation.

Introduced 100 years ago, the invasive pathogen has spread coast to coast and can kill a tree by girdling it. It’s most prevalent in the Rockies and has “incredible infection rates,” Tomback said, 25% in the Park and 77% in Montana.

“The whitebark is definitely in trouble” from the rust and also the beetle, she noted. “As of 2016, 51% of all standing whitebark pines in the U.S. were dead. The Rocky Mountains are the epicenter of all this.”

Because of the threats and their impacts, the tree is being considered for designation as an endangered species. Tomback said she expects a decision later this fall.

Meanwhile, supporters of the National Whitebark Pine Restoration Plan are developing a geographic plan to target core areas and reestablish the species by planting rust-resistant seedlings. When those seeds mature, the nutcracker can disperse the seeds for future groves of resilient trees.

One nutcracker at work on a cone was the star of a video showed by Tomback, who described the bird’s efforts as truly impressive industriousness. Her praise for its strident tune was tempered.