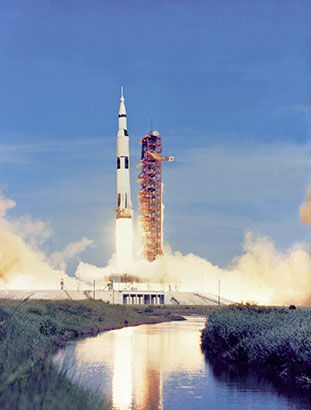 The 363-foot-tall Apollo 15 Saturn V is launched from Kennedy Space Center in Florida on July 26, 1971, on a lunar landing mission. (NASA photo collection) 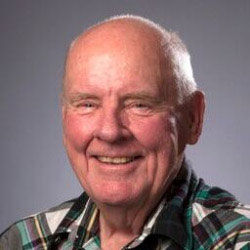 Ray Floyd is an engineering instructor at Northwest College.

The 363-foot-tall Apollo 15 Saturn V is launched from Kennedy Space Center in Florida on July 26, 1971, on a lunar landing mission. (NASA photo collection)

Ray Floyd is an engineering instructor at Northwest College.

The Saturn V rocket, even 40 years later, is still the biggest rocket ever used. No country has ever topped the raw power of the massive 363-foot-tall tube of fire and gas.

Power may be an understatement. As the engines start at t-minus 8, water vapor billows into the air. The roar of the engine, even two miles away, is so loud and so strong the very shirt on your back will shake and rattle.

There’s a good chance that if the U.S. sent something into orbit in the 1960s, Floyd had a hand in it reaching the stars. The Northwest College engineering instructor played a small but key part of the Space Race.

Born in California, Floyd spent most of his younger years in Louisiana before joining the Air Force. Work on radar systems with the Air Force turned into an insistent invitation to join the computing division after a 16-week class. It didn’t take long for Floyd to correct the instructor a few times and be pulled out of his seat and put in front of the blackboard.

Floyd’s teaching career went on until a letter came in the mail from IBM. He had skills they needed. He packed his bags and moved to Florida to work on a little project that became known as the Apollo missions.

Working with the astronauts and engineers on the rockets that sent men to the moon was the highlight of a career that had many high points, and Floyd has held on to how close he was to his coworkers during that time.

“The Apollo system was built by a number of different contractors – Boeing, Chrysler, IBM, Douglas – but you didn’t get the sense that you were a company. You got the sense that you were a family,” Floyd said. “I never got away from that. It’s like when [astronauts Gus] Grissom, [Roger] Chaffee and [Ed] White were killed in the [Apollo 1] capsule fire, it was family.”

Floyd’s work with NASA alternated between providing direct mission support – being in the control room for launch – and being on the outside looking in. Everyone worked on every project, but not everyone got to be in the control room on launch day. When the engineers were in the big chair, so to speak, there was some good-natured ribbing between the launch crew in Florida and mission control in Houston.

“We used to say our job was to get them off the ground,” Floyd said. “Once they left the pad, no matter how small, they now belong to Houston.”

Floyd retired from the aerospace industry and moved to Cody in 1994, choosing the spot after a trip up the I-25 corridor from New Mexico to Bozeman. Now on the other side of 84, Floyd still keeps busy. His “visiting lecturer” position at Northwest has turned into a nine-year gig in the engineering department. He writes academic papers, books of poetry and even a book on the life of a Grand Canyon mule.

There isn’t any one thing Floyd has a special memory of from his time working with NASA, except maybe the launch of the Saturn V rocket. He holds it all near and dear to his heart.