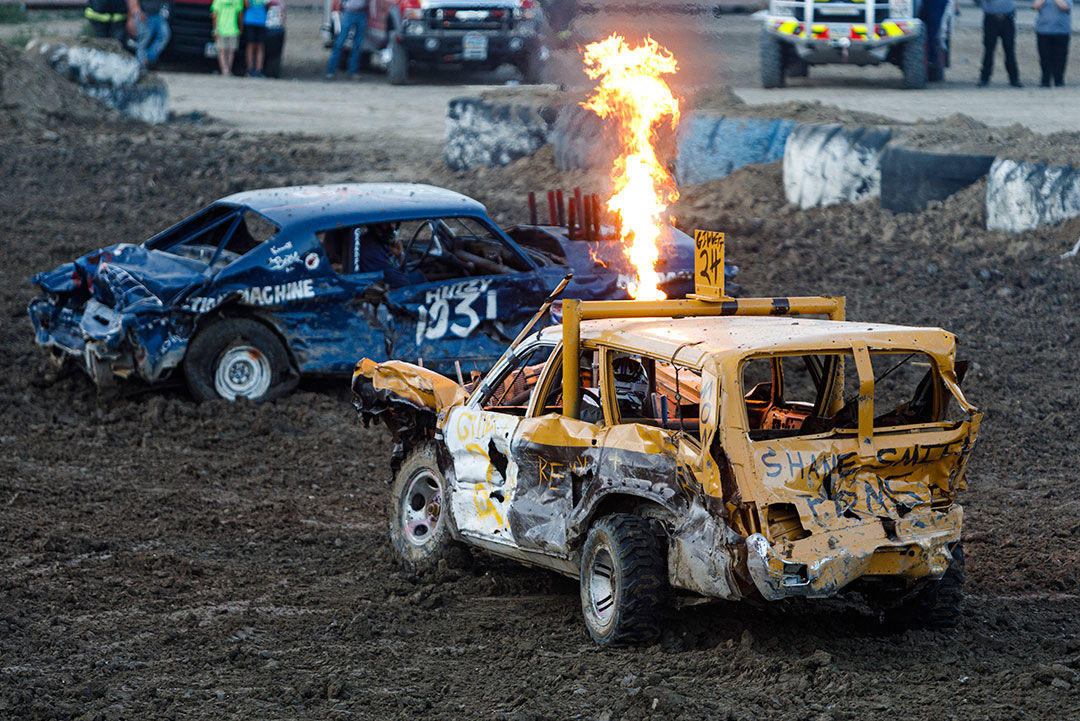 Dylan Hutzenbieler’s car (left) and Travis Gillett’s car come to a standstill in the derby finals at the Park County Fair on Saturday. 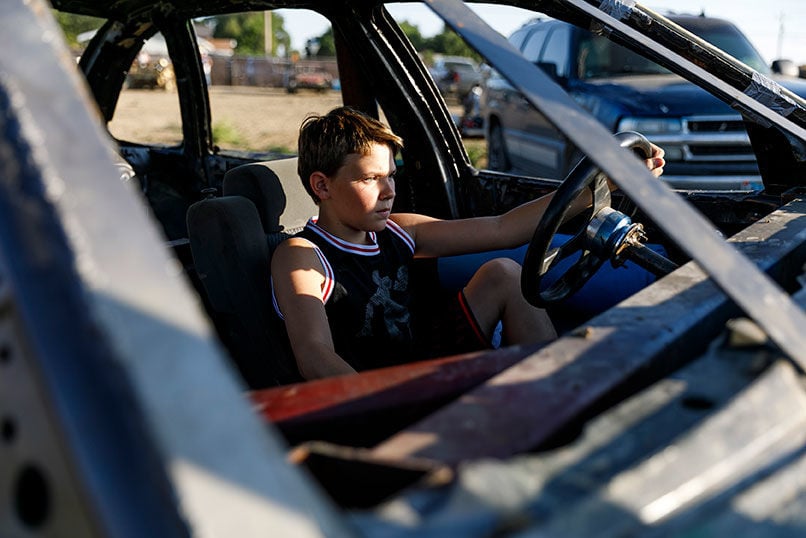 Cole Olsen, 12, makes sure the transmission of a contestant’s car isn’t cracked in between heats during the event. 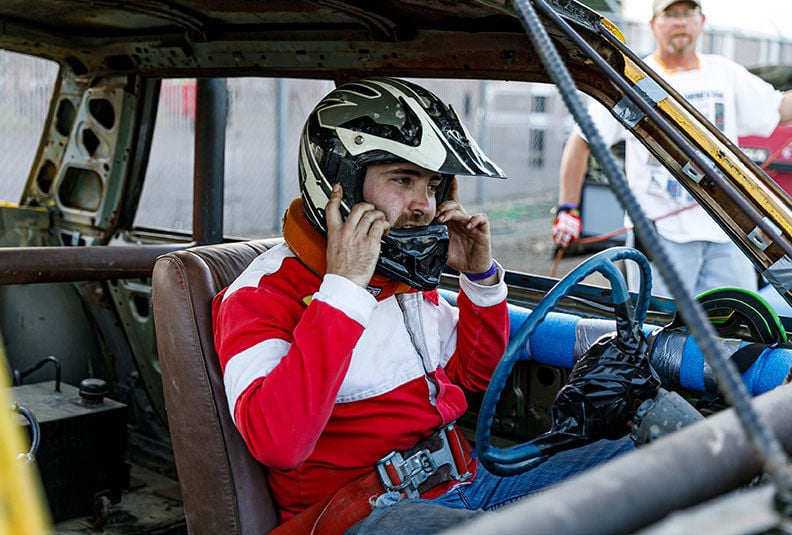 Tyler McIntosh puts on his helmet before the demolition derby finals Saturday. 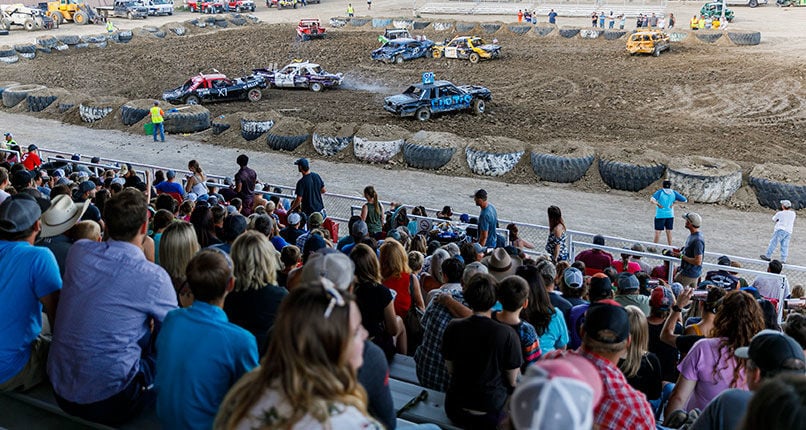 The grandstands at the Park County Fair fill up for the derby. 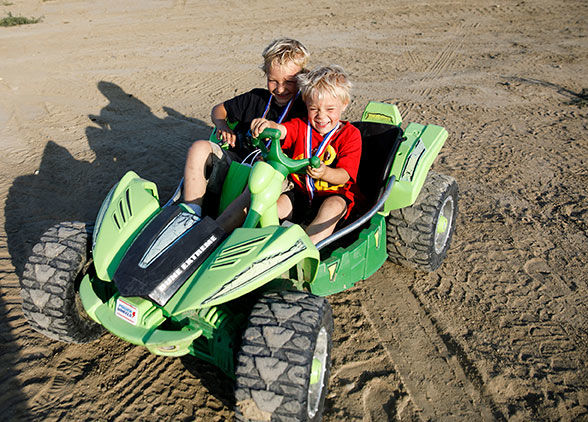 Dylan Hansen, 6, (left) and Matthew Hansen, 3, drive around behind the derby while their dad Tyler Hansen’s car is being worked on between heats. 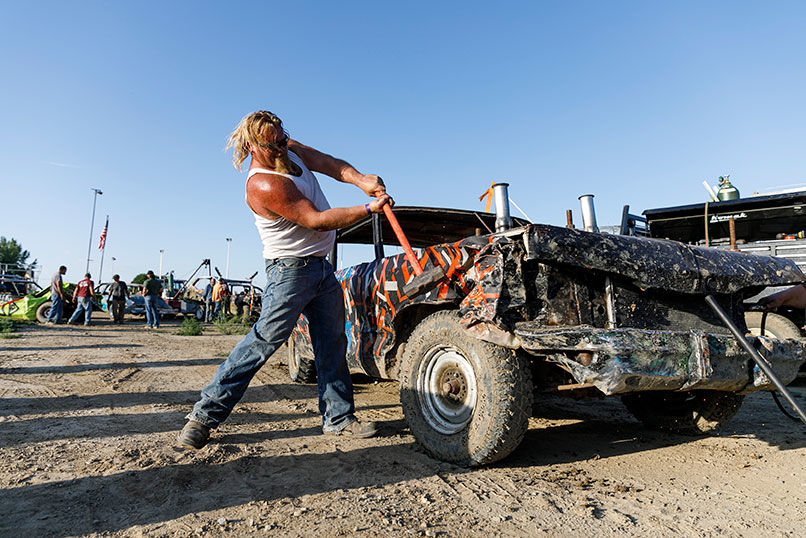 Doug Greathouse takes a sledgehammer to the misplaced metal on the No. 1329 car at the derby. 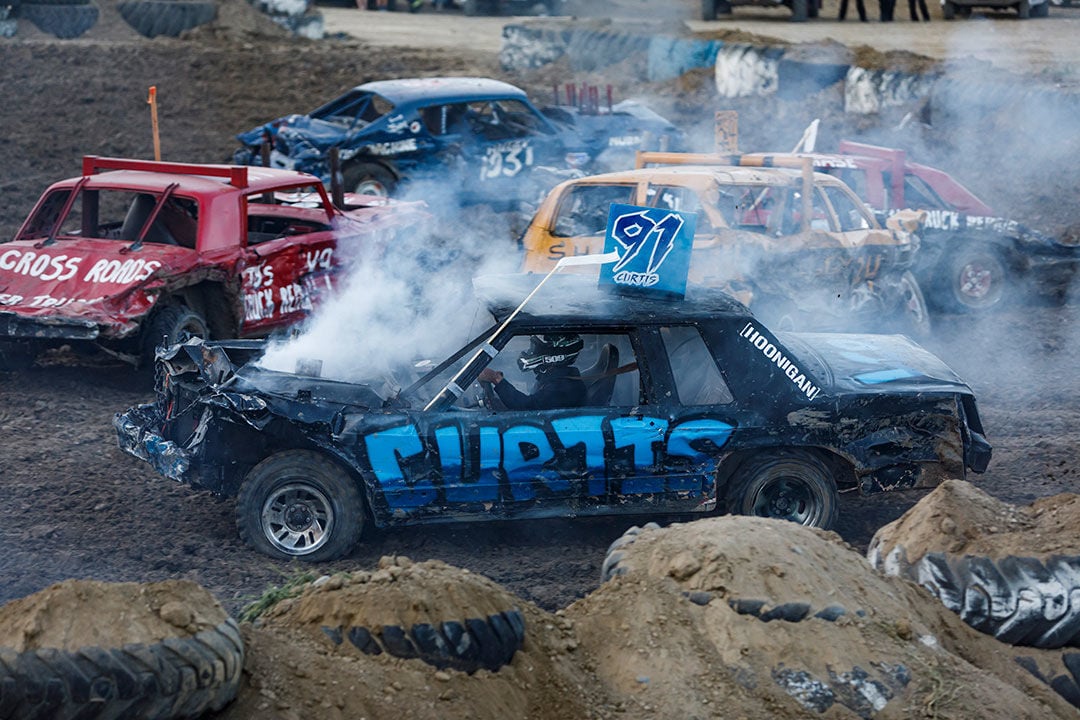 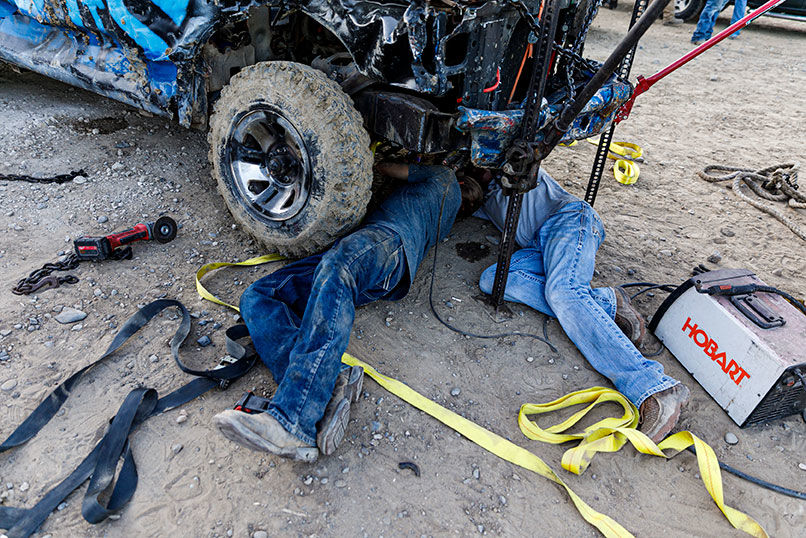 Dylan Hutzenbieler’s car (left) and Travis Gillett’s car come to a standstill in the derby finals at the Park County Fair on Saturday.

Cole Olsen, 12, makes sure the transmission of a contestant’s car isn’t cracked in between heats during the event.

Tyler McIntosh puts on his helmet before the demolition derby finals Saturday.

The grandstands at the Park County Fair fill up for the derby.

Dylan Hansen, 6, (left) and Matthew Hansen, 3, drive around behind the derby while their dad Tyler Hansen’s car is being worked on between heats.

Doug Greathouse takes a sledgehammer to the misplaced metal on the No. 1329 car at the derby.

The menacing message painted in block letters on the front of Reagan Severns’ red, white and blue 1970s Ford truck announced to the world exactly what no-subtlety demolition derby is about.

It read, “NICE TO MEETCHA.”

Just before impact, an unsuspecting driver would read that in his rearview mirror as she bashed the rear of his vehicle.

Demolition derby is ear-plugs optional – only for the sensitive. The sound of angry, buzzing, stirred-up bees bursting forth from engines helped define the show, providing backdrop for the violent action, a readily recognizable paean to the American muscle car.

What a crazy song was played last Saturday night at the Park County Fairgrounds in Powell – heavy instruments at work during this opera, lifeblood engines growling or screaming until sudden silence marked denouements.

Demolition derby is a unique animal in motorsport, the one sub-category where going faster is irrelevant, but staying alive on mechanical life support, even if that means smashing dents out of panels with a sledgehammer, is all-important.

“You would think it would hurt more than it does,” said driver Chad Dietz, speaking for the vulnerability of the humans, not the cars.

The vehicles are fair game – from just about any angle.

“Demolishing,” described Dietz before the first wave of a green flag and collision of metal against metal. As in, “Let’s go demolishing.”

There is an institutional conceit at the heart of quintessentially American demolition derby. Since the 1950s, when derbies first invaded the scene, an element of the population owned enough disposable cars to destroy them when many millions could not afford one to drive.

But the heartbeat event of fairs and festivals across the land does not dwell long on morality plays.

The premise of this cultural touchdown is simple – break stuff, loudly, wildly. Last man standing is the philosophy of demolition derby. The vehicle may be battered and bruised, have barely clinging bumpers, or be unfit to drive your date to the prom, but if those bees are still making noise, you’re in the game.

Just getting in the game is challenging enough. The right car and the right preparation before things go bang in the night, are critical.

There was considerable last-minute fine-tuning in the pits, some of it merely painting on messages and insignias, some of it devoted to engine tweaks.

Demolition derby cars – and trucks – have sturdy chassis, but are stripped down. No windows, no passenger seats, no gas gauges, no odometers. All unnecessary gear and weight. Blankenship’s operating system was based on four dashboard light switches.

That is one river that runs through it for these disguised mini-tanks. They were transformed gas guzzlers prepared for war. No Corollas need apply.

A part-time disc jockey, Blankenship had a partial sponsorship from a NAPA auto parts dealership. One could imagine a hotline link where one could rush replacement parts to the scene as needed.

Typical of the 19 cars and four trucks entered in the annual event, Blankenship’s tires had the mean look of rubber that could grip anything. A key element since the track was deep dirt that rebelled against traction.

Inspection of front bumpers by the casual onlooker led to a certain conclusion – they were more potential weapons rather than protective devices.

Dietz, from Williston, N.D., but with Powell roots, was introducing a new vehicle, a 1966 Chrysler Imperial painted white and green.

Imperials from the 1960s are nearly holy cars in the demolition derby world.

The message was, if you find one, you buy it. Dietz acquired his car after seeing it advertised online in Dillon, Mont.

Reliable equipment aside, Dietz seemed fatalistic about the odds of winning a derby.

What about driver skill?

Emergency vehicles lined up outside the berms constructed of humongous, Mack-truck-like tires and packed-in dirt, fire trucks and ambulances, almost as if event director Don Adams had sent an urgent appeal to Homeland Security.

Ex-driver, now-promoter Adams, 64, conducted the driver’s meeting with the sun high in the sky roasting everyone except the hundreds packed under the covered grandstand.

“It will be hotter when you get in there,” he said.

The drivers, two women, 17 men, were about to strap on crash helmets and cope with sweat and grime as well as feisty foe drivers.

Adams warned against stalling, not making an aggressive move for 90 seconds being cause for disqualification.

Competition consisted of three cars, with the last two cars running advancing to the finals, plus two leftovers from a Grudge Match consolation heat. Given the limited numbers the trucks were more of a sideshow.

Tyler Showalter of Powell and his friends were still painting notes on his white and black 1968 Plymouth Fury almost up to go time.

The messages included “Hello Dave,” a shout-out to a Powell sports fanatic, “Katelyn,” for Showalter’s wife, and “Go Eagles,” as in the Philadelphia Eagles.

When heat No. 1 began, Showalter bounced across the arena, leading with the car’s rear end (insurance in keeping the engine alive longer), smashed solidly into another car – and stuck there right on top of the other trunk. It was extremely frustrating. Showalter could no longer move or attack, so he was toast, yet he still sat behind the wheel of a car in such good shape he could drive it home.

For fans of movie explosions, there were none of the above. Big bangs were rare because cars bogged down in the dirt that held them to about 20 mph.

Mead’s car handling was impressive, circling and ramming, ducking direct hits. He moved to the finals with ease.

Some crashes played out in a kind of slow-motion choreography, with cars in one another’s sights halfway across the arena. This prompted anticipatory chants of “Do it! Do it! Do it!”

Although speeds do not approach NASCAR or the Indianapolis 500, impacts can produce health threats.

“We have roll cages and seat belts, but I’ve been hit into the steering wheel and it hurts,” said Dietz, though not on this day when he progressed to the final.

Alex Wilk, a former Powell resident back from Billings, caused a fright when friends saw his head briefly slumped over after a hit. Officials halted cars in place as Wilk was treated.

“I was seeing double,” Wilk said after being helped from his car and steadied.

Several cars were in worse shape than he was – paralyzed, dented and with steam rising from engines.

Then it was truck time.

Reagan “NICE TO MEETCHA” Severns of Thermopolis was up. At 16, this was her rookie race, checking off a bucket list item by a person too young to have a bucket list.

“It’s always been on my list of things to do,” Severns said.

Around derby cars since she was 5 when she first tightened bolts, Severns begged family to let her smash and crash last year. Now it was real.

Severns swiftly showed off her slogan with a squashing hit, but then stalled. She rocked back and forth, as if that would jump start the truck. Then it did surge back to life, though not for long.

The truck division ended in confusing fashion with all four vehicles almost simultaneously going dead. Things went from roar to silent in seconds. In truly a judgment call, the judges sorted out 1-4, with Severns given third place.

End of the road

It took just 10 minutes to winnow the eight-car final to three as the hunks of Detroit metal gave out under steady assault.

Time out was called to rescue Austin Curtis after he took a hammering. He was led away clutching his ribs.

But Mead waved a surrender flag. The other Thermop car was driven by his nephew Chase Mead. Fans booed lustily, convinced they were witnessing more collusion than Robert Mueller III talked about.

Chase Mead said he had Luke in his crosshairs and was prepared to pummel him, but uncle broke his throttle and could not resume after the Curtis hiatus.

Some finalists’ cars resembled scrap, dented beyond sledgehammer assistance, and had to be lifted from the arena by massive wreckers.