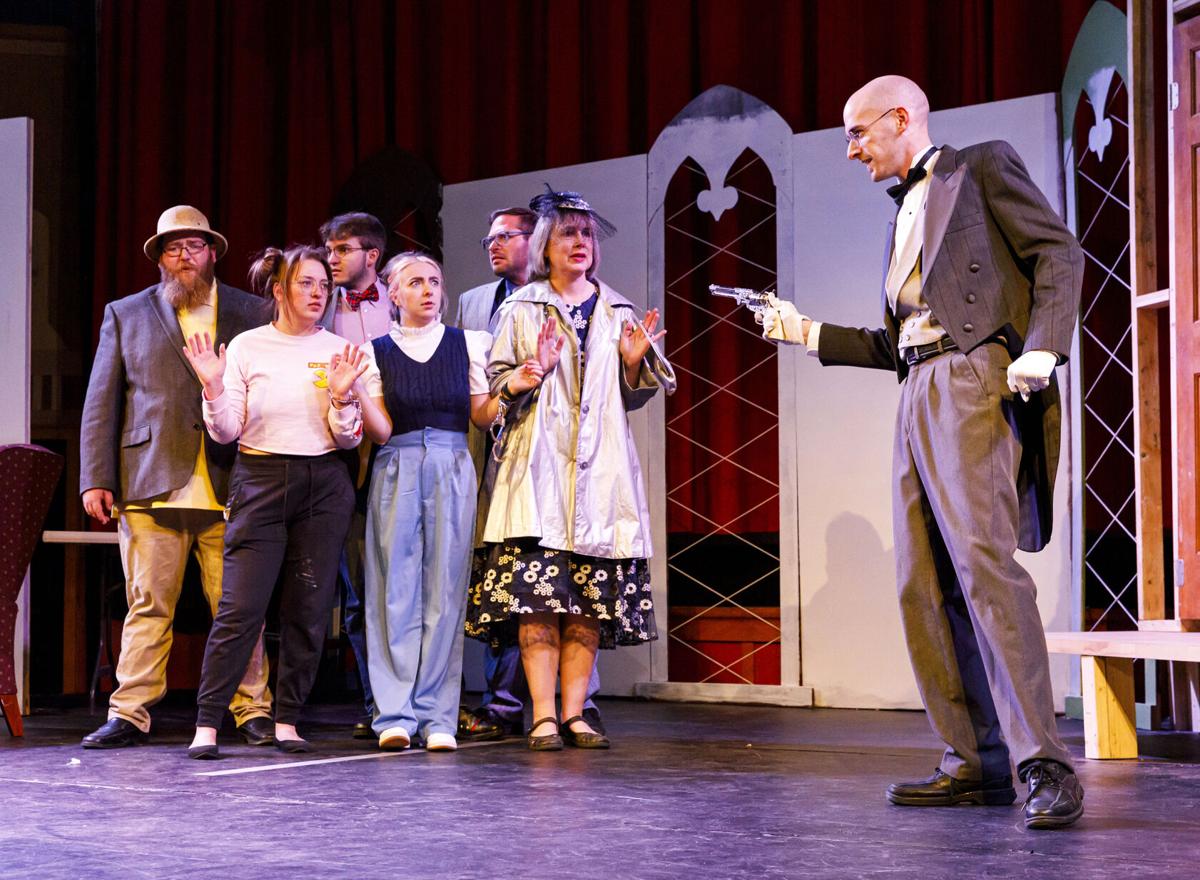 Ben Galagan (from left) as Colonel Mustard, Jacinta Schneider as Miss Scarlett, Garrett Winkler as Professor Plum, Holly Wilkerson as Mrs. Peacock, Michael Jaycox as Mr. Green, Kristin Bales as Mrs. White and Andrew Rossi as Mr. Wadsworth practice in a rehearsal for “Clue: On Stage” at the Cody Theatre. 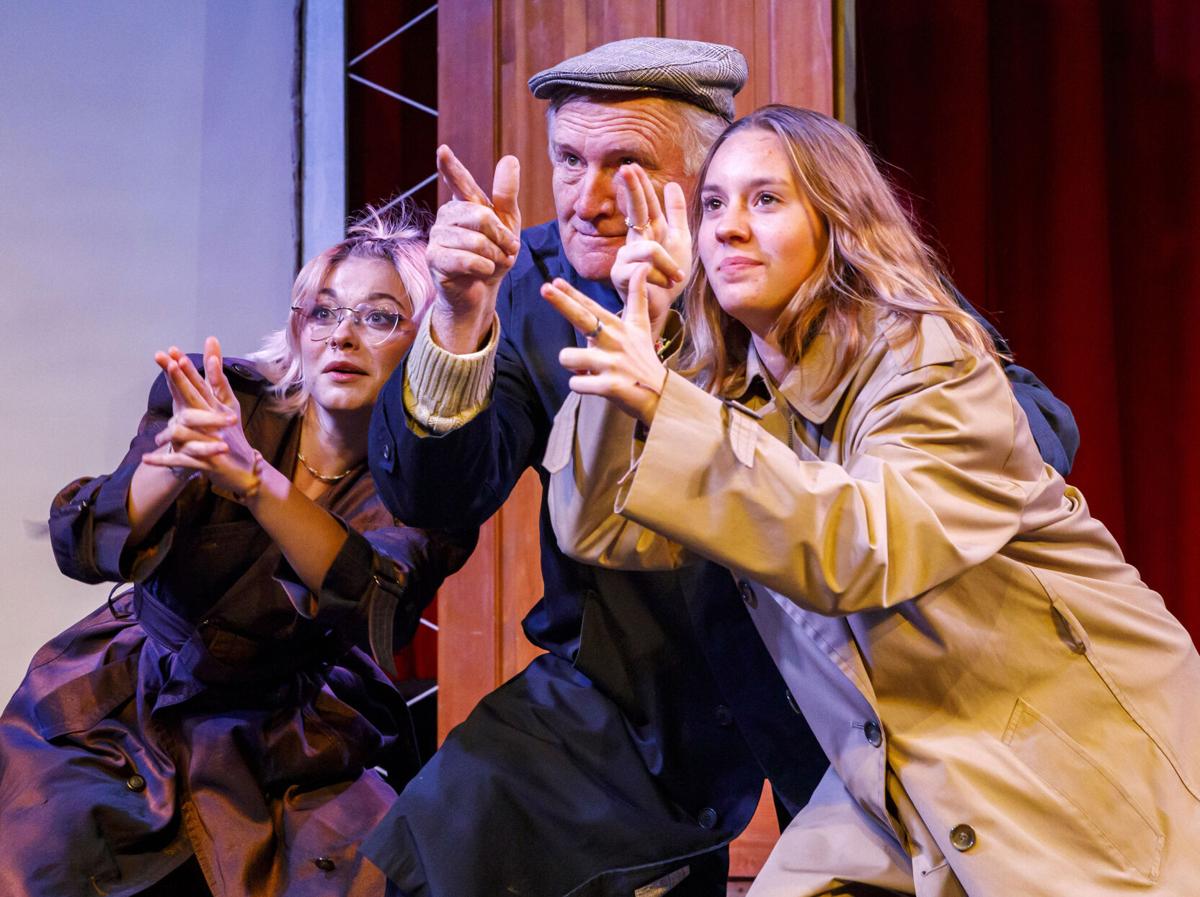 Boston Fernandez (from left), Ted Wambeke and Willow Fernandez perform as the police. 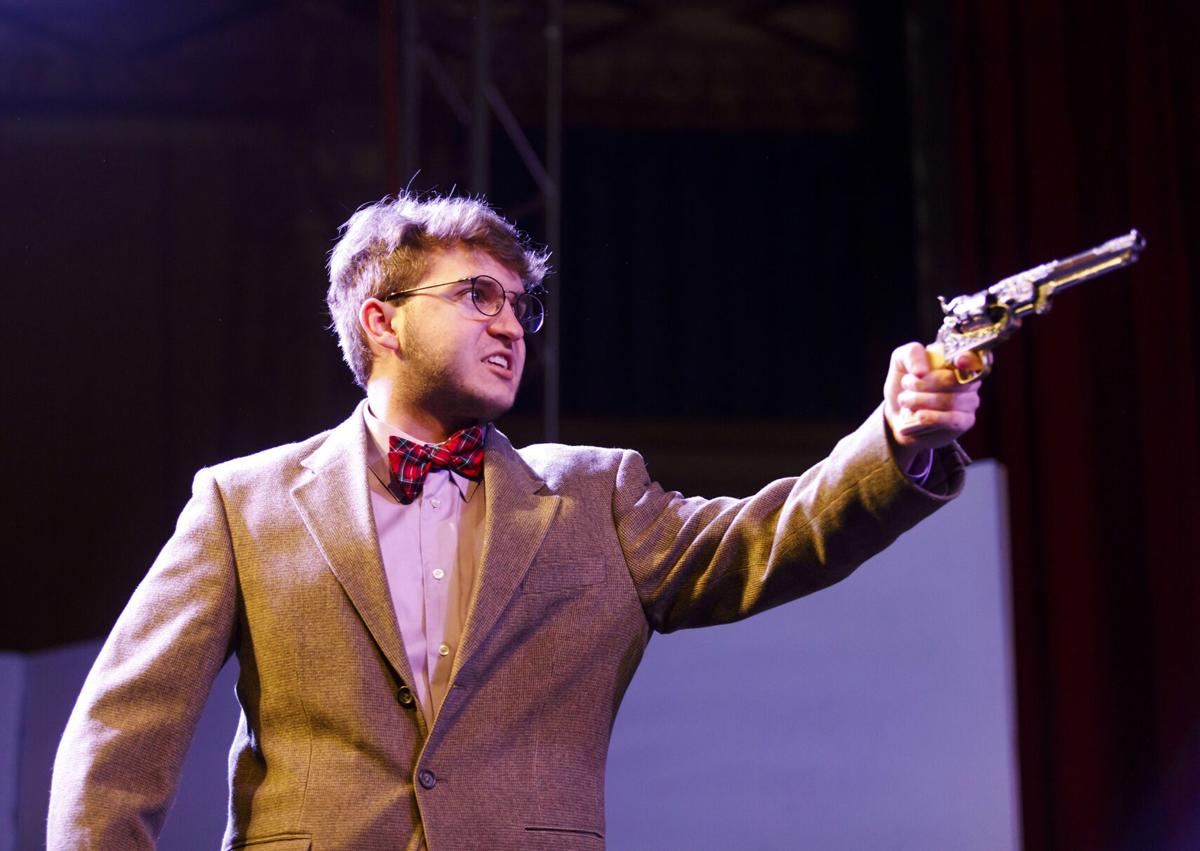 Garret Winkler performs as Professor Plum in a rehearsal for the play “Clue: On Stage” at the Cody Theatre.

Ben Galagan (from left) as Colonel Mustard, Jacinta Schneider as Miss Scarlett, Garrett Winkler as Professor Plum, Holly Wilkerson as Mrs. Peacock, Michael Jaycox as Mr. Green, Kristin Bales as Mrs. White and Andrew Rossi as Mr. Wadsworth practice in a rehearsal for “Clue: On Stage” at the Cody Theatre.

Boston Fernandez (from left), Ted Wambeke and Willow Fernandez perform as the police.

Garret Winkler performs as Professor Plum in a rehearsal for the play “Clue: On Stage” at the Cody Theatre.

The Cody Theatre Company invites area residents to “get a clue” – with its inaugural production, “Clue: On Stage,” Oct. 22-24 at the historic Cody Theatre.

Board game aficionados are sure to recognize the suspects in this murder mystery based on the classic parlor game, Clue. Local players bring the game to life as they portray possible culprits in the untimely death of manor owner Mr. Boddy, played by Ted Wambeke. Was it Professor Plum (Garret Winkler) or Mrs. Peacock (Holly Wilkerson)? Could it be Mrs. White (Kristin Braun Bales), Colonel Mustard (Benjamin Galagan) or maybe even Miss Scarlet (Jacinta Schneider)? And what about Mr. Green played by Michael Jaycox?

“I laugh every time we have a rehearsal,” Tyler Wilde, director/producer says. “These actors bring their own interpretations to each role which makes for a production that’s fun and entertaining with that special touch of nostalgia.”

As the whodunit begins, an anonymous host has invited the six unsuspecting guests to a dinner party at Boddy Manor. It’s not long before they discover that each of them has fallen victim to the same blackmailer – their host for the evening. Each is presented with a weapon (dagger, revolver, rope, wrench, candlestick or lead pipe) and a no-win proposition: either pay their extortionist double or kill the innocent butler, Wadsworth, played by Andrew Rossi (also the production’s assistant director). Organizers call it “a madcap, slapstick evening full of murder, mystery and laughs” as the plot seeks to puzzle out the culprit in their midst.

“The hardest part of this presentation is that the core players are on the stage for the entire play,” Wilde explains. “There are few entrances and exits for the cast – no time for breaks.”

The theater provides audiences with a good view of the action. Wilde constructed a compact set that represents some of Clue’s original rooms: ballroom, billiard room, conservatory, kitchen, hall, lounge, library and study. In addition, like other theatre companies, those with the greasepaint also roll up their sleeves to apply some elbow grease, too.

“All of us help with those behind-the-scenes operations,” Wilde adds. “This is a very talented group who works well together. We formed The Cody Theatre Company this fall to provide more opportunities for the arts in this area, which we believe makes our community better. And what could be more appropriate than using the historic Cody Theater?”

The company – through the auspices of the Rocky Mountain School of the Arts – plans to offer live stage plays and Improv (improvisation) events throughout the year for the public with open auditions for thespians in the area. Already on tap for this spring is Shakespeare’s “Midsummer Night’s Dream.”

For Clue, the company held auditions in August, and the cast has been working on the production ever since. “Clue: On Stage” originates from the screenplay by Jonathan Lynn and written by Sandy Rustin with additional material by Hunter Foster and Eric Price. The production is based on the Paramount Pictures Motion Picture and the Hasbro board game of the same name.

British board game designer Anthony E. Pratt developed Clue in 1943, and the game was first manufactured by British company Waddingtons in 1949. Since then, it has been relaunched and updated several times, and it is currently owned and published by the American game and toy company Hasbro.

Tickets for “Clue: On Stage” are $20 each and are now available online (codytheater.com/thecodytheatrecompany) and at the Cody Country Chamber of Commerce; they will also be on sale at the door. The Friday and Saturday, Oct. 22-23, performances take place at 7:30 p.m. with a matinee on Sunday, Oct. 24, at 2:30 p.m. Doors open 30 minutes prior to each performance with concessions offered by Sweets in the theater lobby.

For more information, check out the Company’s website, codytheater.com/thecodytheatrecompany.