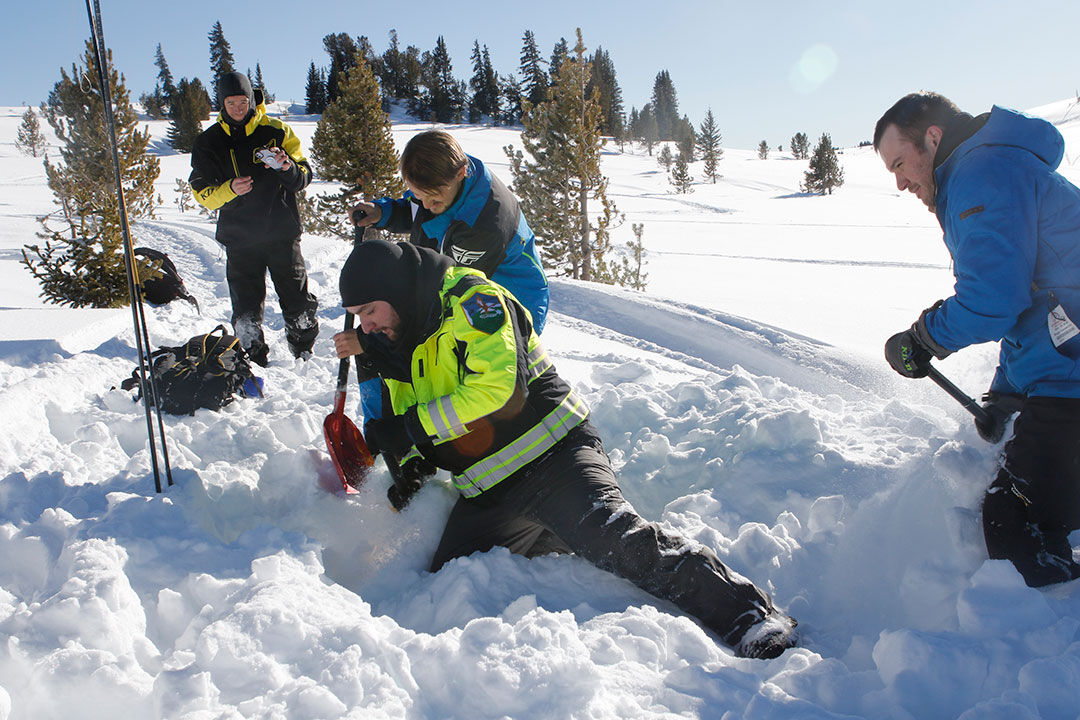 Bridger Teton avalanche instructor Eric Knoff (from left) watches as Ethan Robinson, Kenny Richter and Tom Toohey dig out a beacon that represents a buried victim during an avalanche clinic Jan. 9 off the Beartooth Highway. 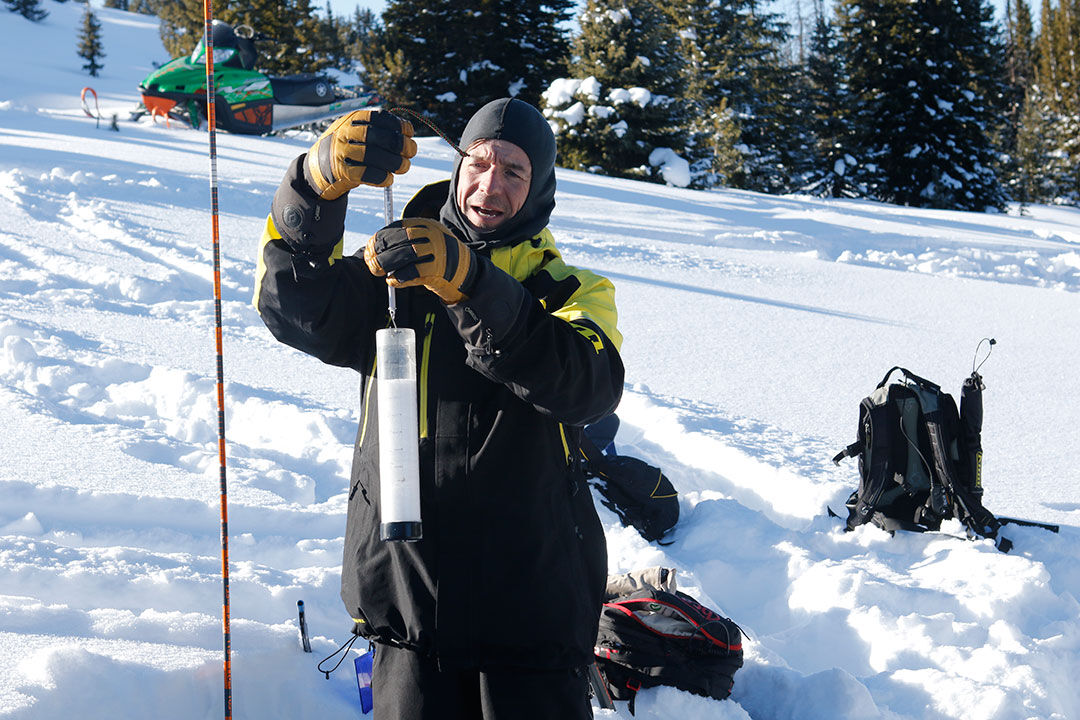 Knoff analyzes the water-to-snow content distribution in a snow sample taken during the clinic on Jan. 9. 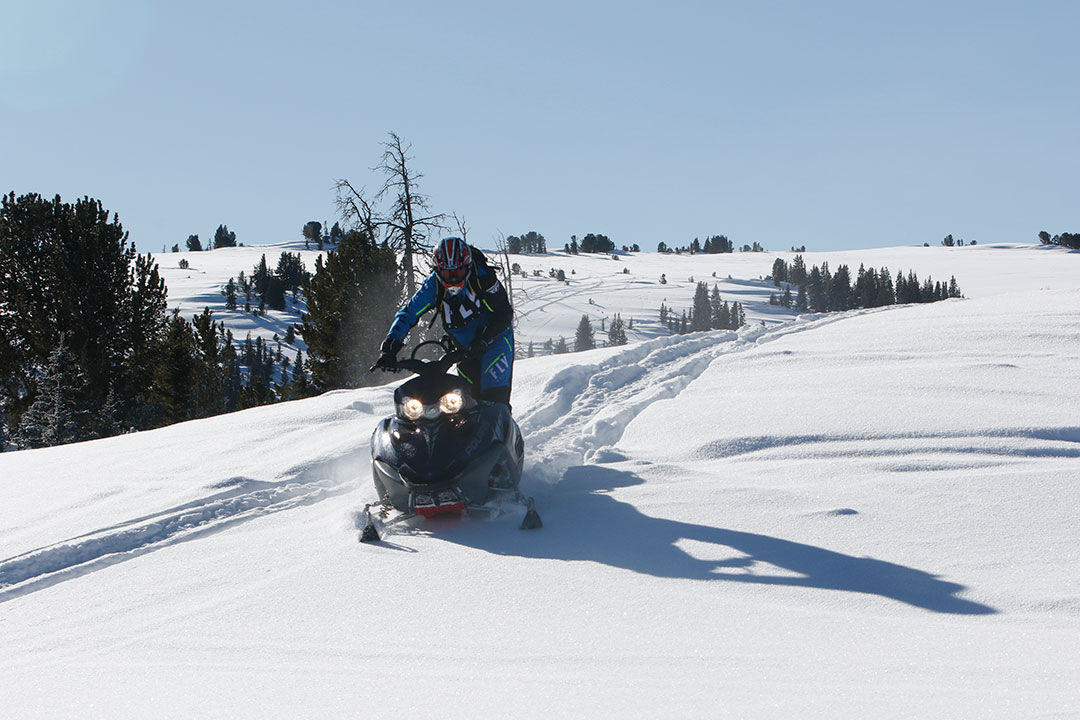 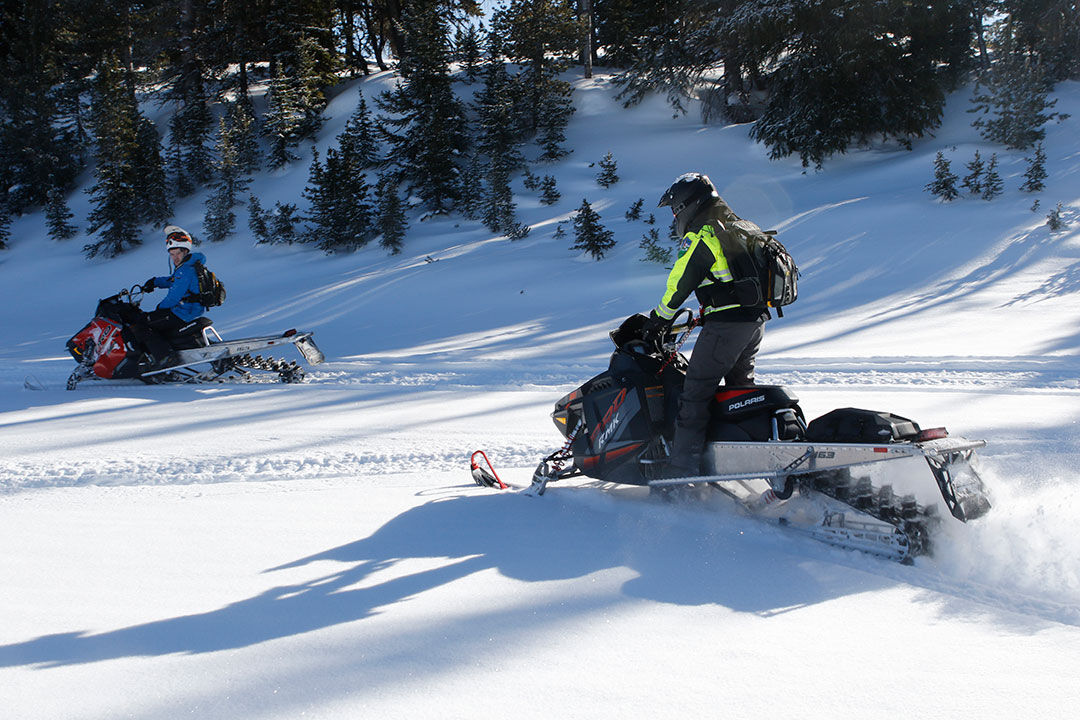 Tom Toohey (left) and Ethan Robinson ride their sleds during a short break in the clinic Jan. 9.

Bridger Teton avalanche instructor Eric Knoff (from left) watches as Ethan Robinson, Kenny Richter and Tom Toohey dig out a beacon that represents a buried victim during an avalanche clinic Jan. 9 off the Beartooth Highway.

Knoff analyzes the water-to-snow content distribution in a snow sample taken during the clinic on Jan. 9.

Tom Toohey (left) and Ethan Robinson ride their sleds during a short break in the clinic Jan. 9.

Just one day before he went to an avalanche education clinic, Park County Search and Rescue member Robert Lind found himself hauling a snowmobile off his friend’s body.

“You just never know when something is going to go wrong,” he said.

His friend Katrina Haworth was no novice. She had more than 20 years of experience riding snowmobiles and rides them for her job with the U.S. Forest Service.

Haworth fell off her sled when snow underneath her crumbled on a steep slope, causing her and the machine to tumble down the hill-side with the sled injuring her leg.

Lind put Haworth in a splint using the handle from his shovel, a skill he learned from Search and Rescue training.

“It worked perfect for a leg splint,” he said.

When traveling it’s important to come prepared with an avalanche beacon, shovel and probe. But as important as these items may be, they provide little without the proper training on how they should be used in an emergency.

The Cody Country Snowmobile Association held its annual avalanche awareness education clinic on Jan. 9, just one day after two major search and rescue efforts took place in the local area. The incident with Haworth was only about 10-15 miles away from the clinic site.

“Even though we don’t have that kind of (avalanche) terrain here, if we save a life somewhere else you really accomplish your goal,” CCSA member and clinic participant Ed Higbie said.

Right around the corner

Cody resident Eric Alexander and his family had never been to avalanche training before the clinic. He said he had always been hesitant to get into snowmobiling after his brother died in a slide about 23 years ago, but a family gold mining claim in the Big Horn Mountains lured them into the sport due to the ease of hauling mining gear by sled.

His brother was the only one in his group wearing avalanche safety gear on the day he was buried.

“Everyone should have the (safety) knowledge, that’s the key,” he said, “because it doesn’t do you any good if you’re the only one that has the knowledge or has the equipment, especially if you’re the one that gets buried.”

He said his brother’s passing still affects the way they ride decades later, refraining from steep slopes and other risky terrain.

About 30 participants gathered at the Search and Rescue safety shelter off the Beartooth Highway for the on-snow field class. The main purpose of the clinic – led by the Bridger-Teton Avalanche Center – was to teach techniques to prevent starting avalanches and how to perform a rescue if one does occur.

“Ninety percent of avalanche accidents or more are preventable with a few different choices and decisions,” said avalanche instructor Eric Knoff. “Some very basic skills can save your life and stack the deck in your favor.”

Splitting into teams of two, the participants received a “report” of a recent avalanche. The teams had to use avalanche beacons to find another one buried somewhere in a large snowfield, more than five feet below the surface.

“Why not?” Knoff remarked. “Making it a little more difficult.”

Panting and winded from shoveling snow at breakneck speeds, Lind and Park County SAR member Elise Lowe dug out the buried beacons in about seven minutes.

During an avalanche rescue, time is key. With the knowledge that a buried victim’s chances of survival are trickling down with each second, nerves and emotions can quickly get the best of rescuers, Knoff said.

A vocal leader should be established as soon as a slide occurs in order to facilitate important communications and directions.

“It takes like 25 seconds and it makes the entire scenario- whether it fails or succeeds based on those … seconds,” Lowe said.

In the afternoon, the participants practiced digging a snow pit. Knoff brushed aside excess snow particles, delicately pressing his snow saw into the ice with surgical precision to create a column-like structure for analysis. This provides a terrarium-style view of the snow to expose weaknesses in its structure.

The three skiers buried in the other Search and Rescue event on Jan. 8 outside Cooke City did this. Although they dug a pit, it was in a location not representative of the snow they would be skiing on, the Gallatin Avalanche Center reported.

“You have to choose your terrain wisely, and I feel these kids made a very poor terrain selection for the snow conditions,” Knoff said.

Choosing the right slope to travel on is critical, as the sun and shade make impactful changes to the snow structure. Even a north-facing slope may be less likely to slide than a northwest-facing one in close proximity due to the increased time it is in direct sunlight.

Avalanches occur on 30-degreee or greater slopes. For those traveling in that range or directly below these slopes, they can happen anywhere, any place, anytime. The only human variable to lower chances of getting caught in a slide is risk mitigation.

“You have to manage your terrain,” Knoff said. “You have to know what avalanche terrain is.”

Bert Miller, president of CCSA, wanted to make sure the clinic still took place this year because of the ever-present nature of avalanches.

“A simple rollover can take a leg,” Miller said. “It’s just amazing what can happen.”

Earlier this winter, Park County Sheriff Scott Steward donated a sign located near the lower section of the Beartooth Highway that lets users know whether their beacon is off or isn’t working, a critical function when heading into the backcountry.

“(Beacons) lose about 30% of the battery life when they get real cold,” Miller said, adding last winter he developed a bad habit of forgetting to turn his beacon on.

To start the day, Knoff had participants test out their beacons en masse, triggering a cacophony of beeping noises.

While snowfall has been weak in the region this year, Miller said all it takes is a few storms and hordes of snowmobile enthusiasts will come out of the woodwork.

“When you have a buried persistent weak layer, it’s unpredictable and it likely produces large avalanches,” Knoff said. “If you trigger something it’s going to take the entire season’s snowpack with you.”

With any fresh snow comes heightened risks, and with higher visitor traffic comes more accidents. The only way to slow the trend is to know before you go.

“After learning what can happen out here – probably need a little training,” participant and deputy Tom Toohey said.