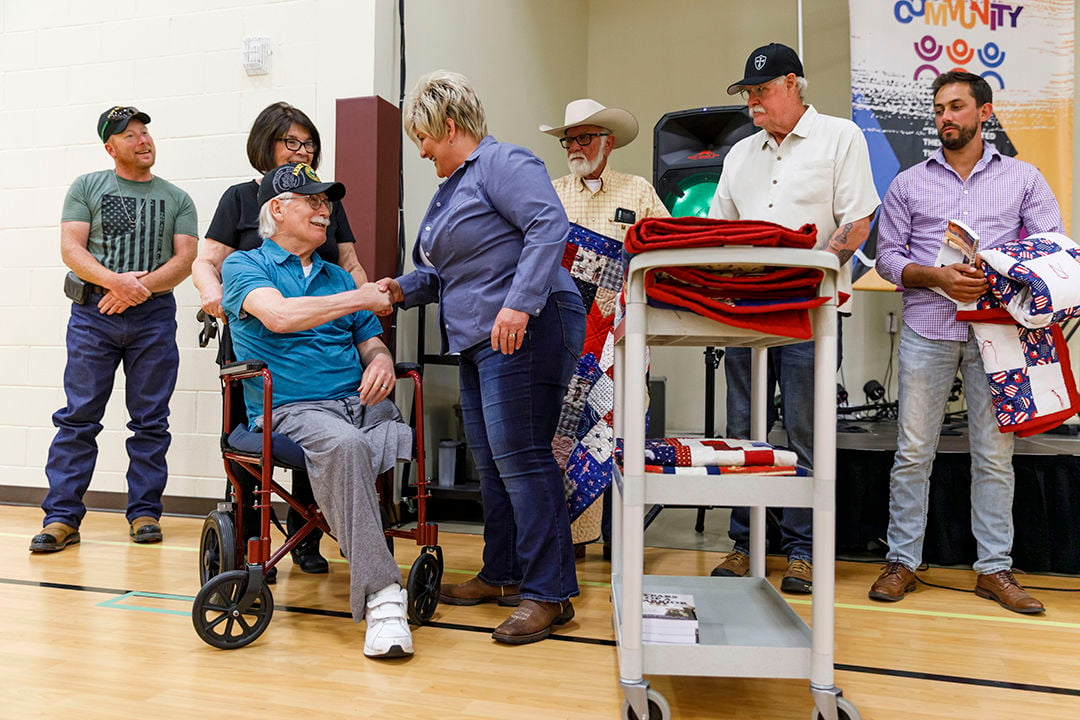 Jona Vanata presents Steven Bryan with a quilt from Families on the Front Lines during Reboot Combat Recovery on Wednesday at Cody Missionary Alliance. Donny Meschke (from left), Jo Bryant, Mike Arnold, Patrick Harrington and Derek Tippetts stand in the background. The quilts were made by Paintbrush Piecers and Trinity Lutheran Church. 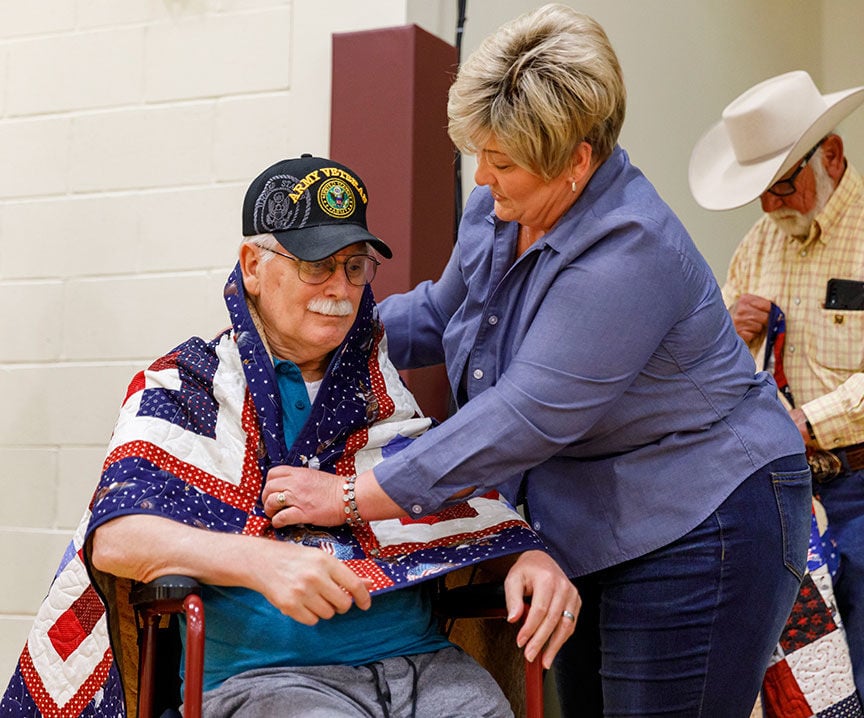 As Jona Vanata presented Vietnam vet Steven Bryan with a quilt, she said, “No longer a cold shoulder, now a warm embrace.” 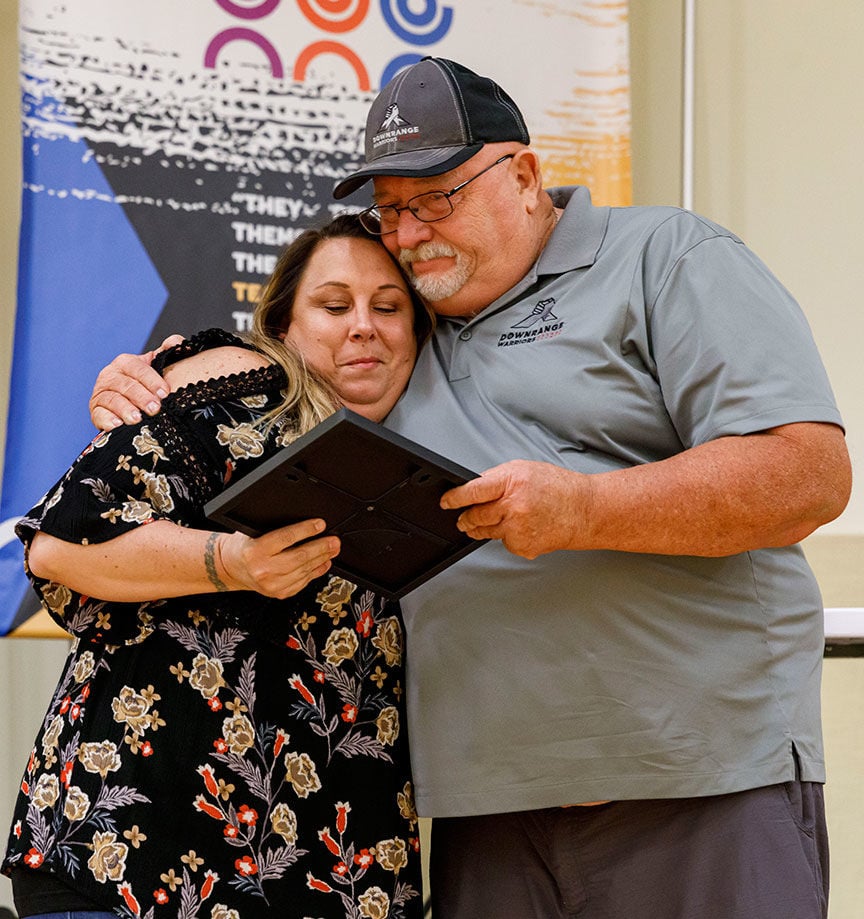 Jona Vanata presents Steven Bryan with a quilt from Families on the Front Lines during Reboot Combat Recovery on Wednesday at Cody Missionary Alliance. Donny Meschke (from left), Jo Bryant, Mike Arnold, Patrick Harrington and Derek Tippetts stand in the background. The quilts were made by Paintbrush Piecers and Trinity Lutheran Church.

As Jona Vanata presented Vietnam vet Steven Bryan with a quilt, she said, “No longer a cold shoulder, now a warm embrace.”

After 28 years of marriage, Todd Bray found himself divorced and sitting at the dinner table with a .45 in his mouth.

The veteran and former contract operator who went to Vietnam three times had spent 20 years of his life talking down veterans in this exact situation – part of a team called in at the last minute to try to save a life. Now he was the one who needed help.

Cody was an escape for Bray, like many of the other veterans who make up 10% of the Park County population – an escape from the madness, from the conflict of the city and the chaos of the people. It’s peaceful. Spacious. Isolated, depending on who you ask.

Isolation wasn’t a bad thing. It was freedom. It was how the veterans protected their families. At least, until they began spiraling and a little voice tried to convince them that if they truly cared about their families, they would take themselves out, take their own lives.

That voice wins to the tune of more than 8,000 folded flags and 21-gun salutes every year. Eight thousand peals of the bugle playing “Taps” – a song that signals when to turn out the lights on a military base.

For many like Bray who didn’t turn out their lights, there was ReBoot Combat Recovery.

The faith-based trauma healing group that turns the Cody Missionary Alliance Church into a safe place to be vulnerable held a graduation last week after completing its sixth course in the midst of a pandemic.

“It hit me at my core and that’s what I needed,” said Derek Tippetts, 35 and a father of six. “As many psychologists as I’ve been to, none have even come close or compared to this group.”

No matter who has the biggest demons to slay, there is no measuring stick for who has it the worst.

“It’s a way to relate with folks who are also hurt, spiritually,” Tippetts said.

The Almighty and spirituality is an important part of a course that prides itself on leaving the preaching at the door.

“Leaving God out of a PTSD ministry is kind of like leaving a 6-foot-8, 300-pound friend in the car when you start a bar fight,” Bray, president of course affiliate Downrange Warriors, said. “It’s just dumb.”

Cody isn’t unique in hosting the free 12-week veteran-led course. Some 200 locations around the nation hold the free ReBoot classes for veterans, first responders and their families.

Social scientists digging into the program have found that most people in it have become less angry and less depressed and have felt like they could be part of a group again. In essence, they had started to heal.

If love could manifest itself in a room, it wasn’t hard to feel it as the veterans plodded to (and on occasion, fought with) the microphone at the front of the cozy gymnasium, straightening a little with every word as they shared the tale of their transformation.

“I was drug here, kicking and screaming,” Walter Sweeney, 42, told the brothers- and sisters-in-pain. “It was honestly a shock to me, how much better I felt going through this course.”

The organizers make no allusions about ReBoot being the cure for PTSD. It can’t erase the past or erase the memories.

They don’t like to think of post-traumatic stress as a disorder, because that makes the veterans sound like they’re broken, instead of wounded in their souls. But  the program can give those struggling more tools in their toolbox to deal with it.

It isn’t easy to get those tools. There is pain, there is anger, there are tears. The hardest part can be showing up to the course, admitting they need help. ReBoot is waiting when they do.

Bray has come a long way from that dire moment at his kitchen table. Now, he’s late to dinner with his wife and climbing mountains to meet vets in crisis. But it isn’t about him. It’s about helping veterans in need.

“Too many people are riding the back of these dying vets for their own living or their own gratification or their own fame,” he said. “And I’m going to tell you something. We are not that way and won’t be, or there will be an ass-kicking somewhere.”

Derek Tippetts stood before the microphone, telling his tale in a purple button-down shirt, recounting how ReBoot saved his marriage and his relationship with his children. He offered a parting thought:

“We’re naturally good people. We just get strayed by the world, I guess.”