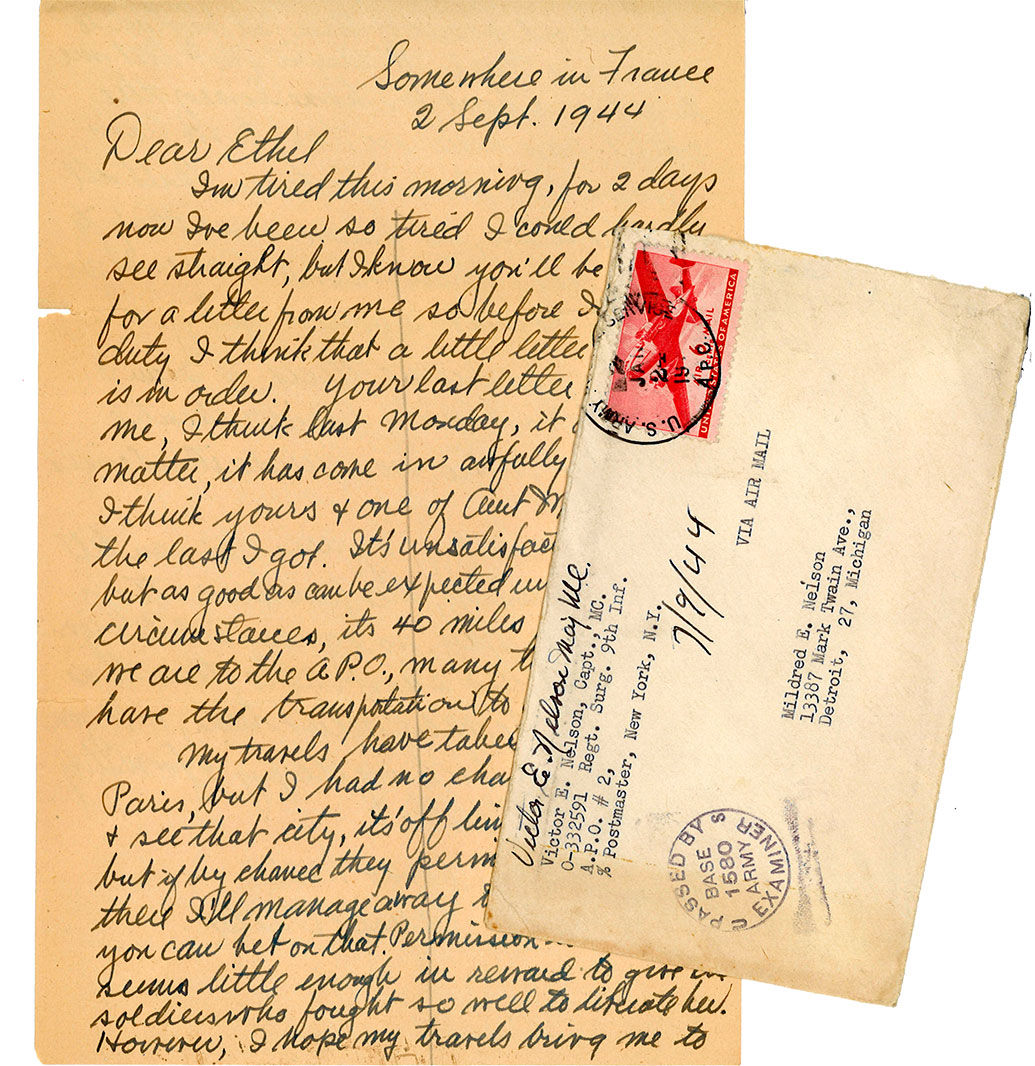 One of the many coded letters Victor Nelson sent home to his wife Mildred from Europe during the war. She would circle the first letter of the key word and draw a line to the other key word. 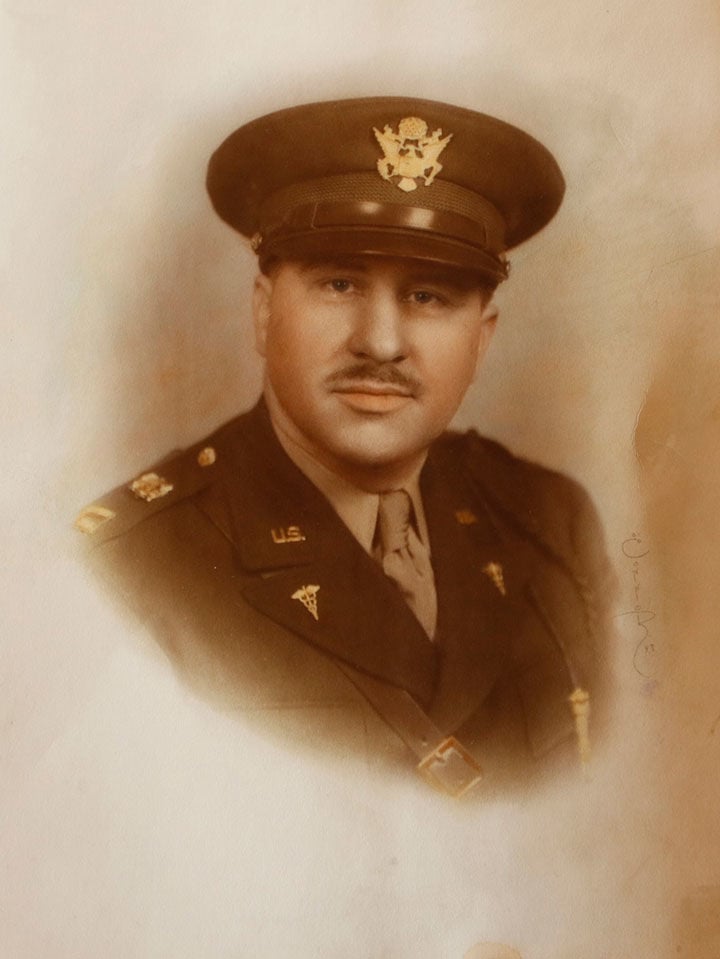 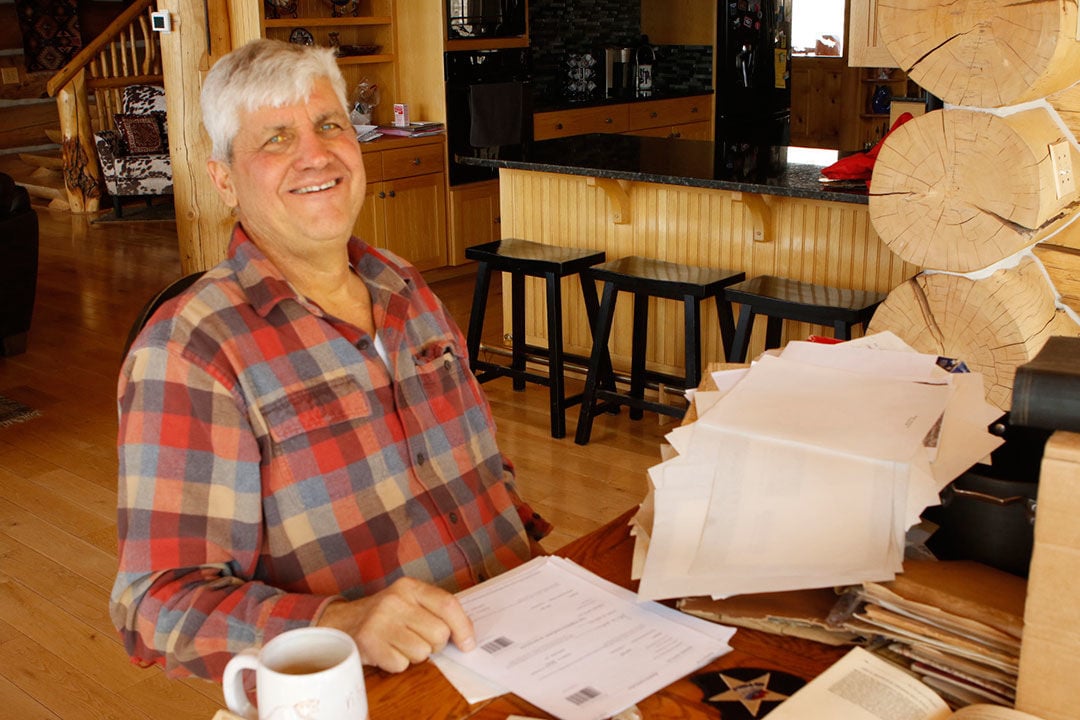 David Nelson has worked to crack his grandfather’s code. 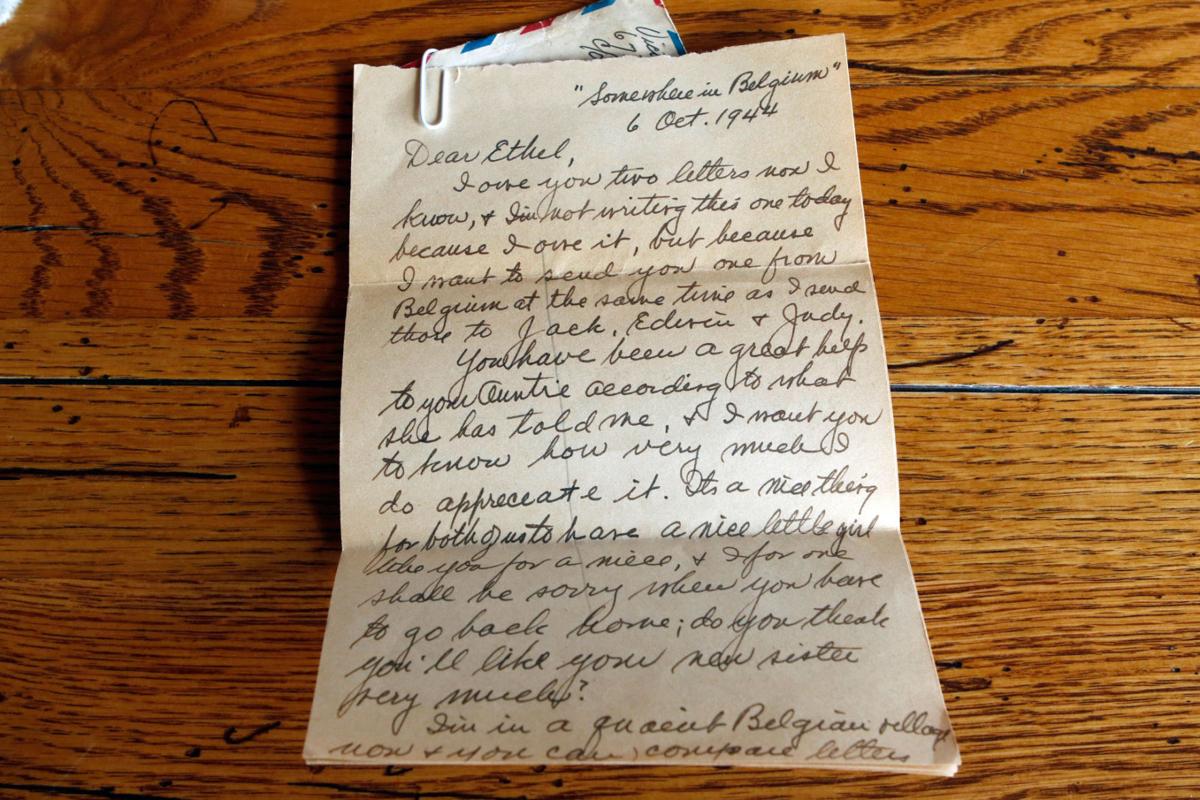 One of the coded letters Victor Nelson wrote spoke openly about him being in a town in Belgium, while the code word revealed the exact town: Stavelot. 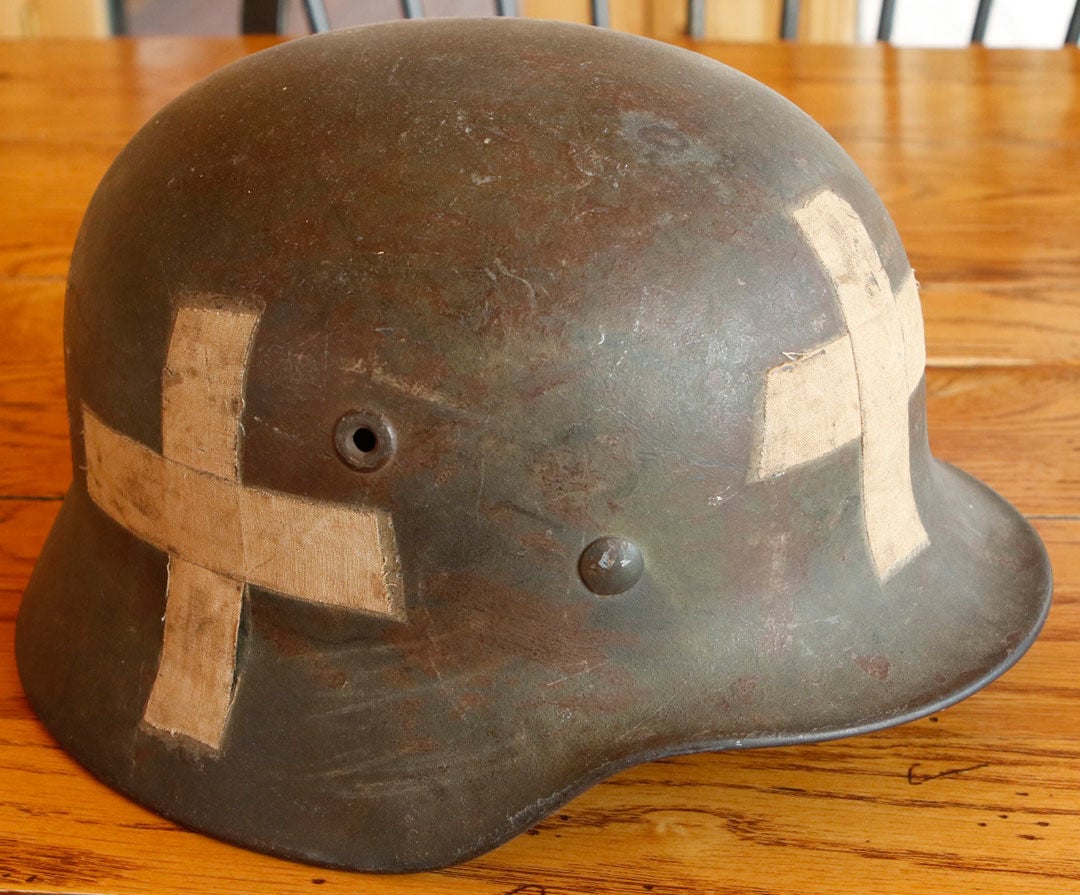 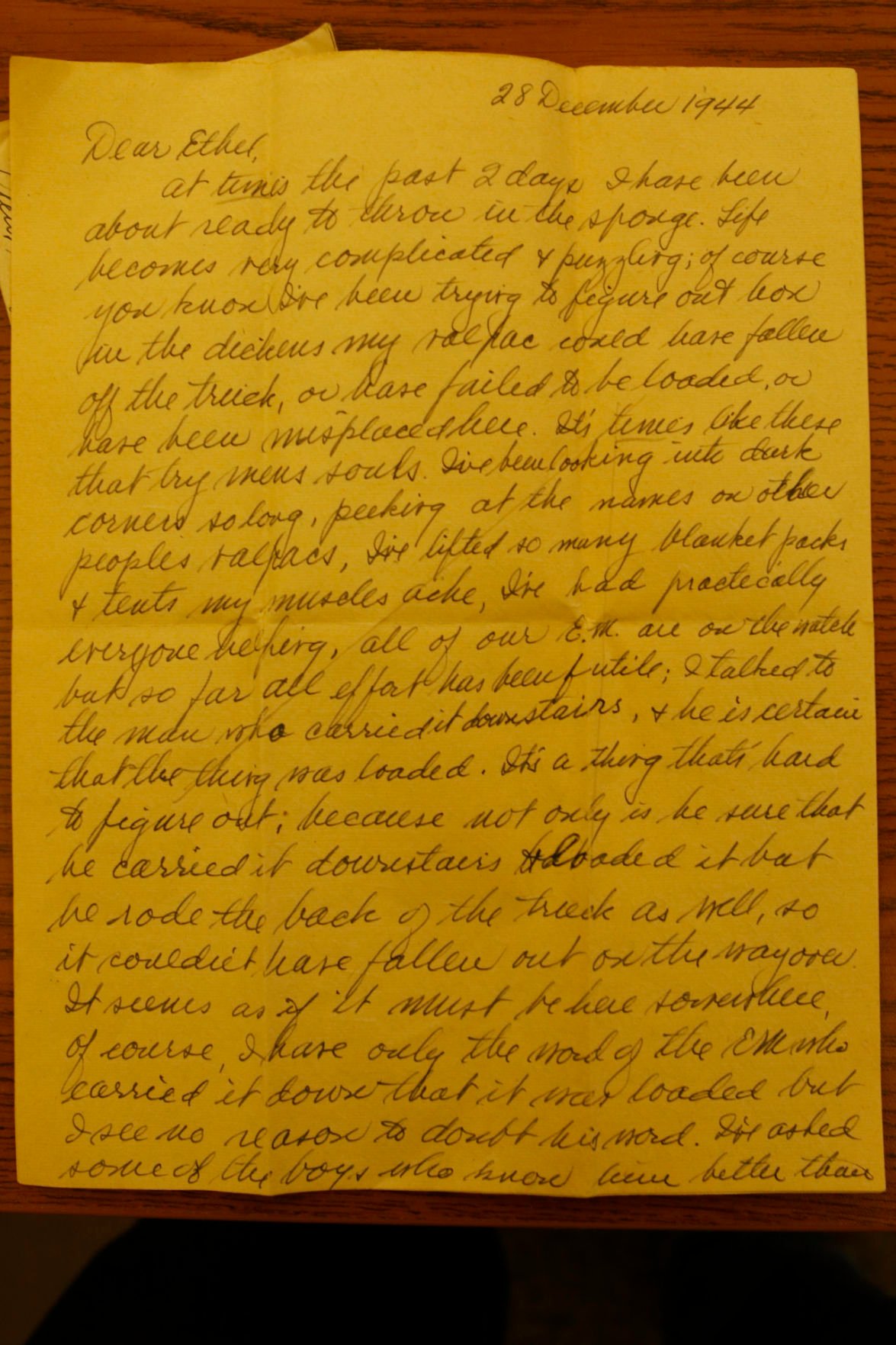 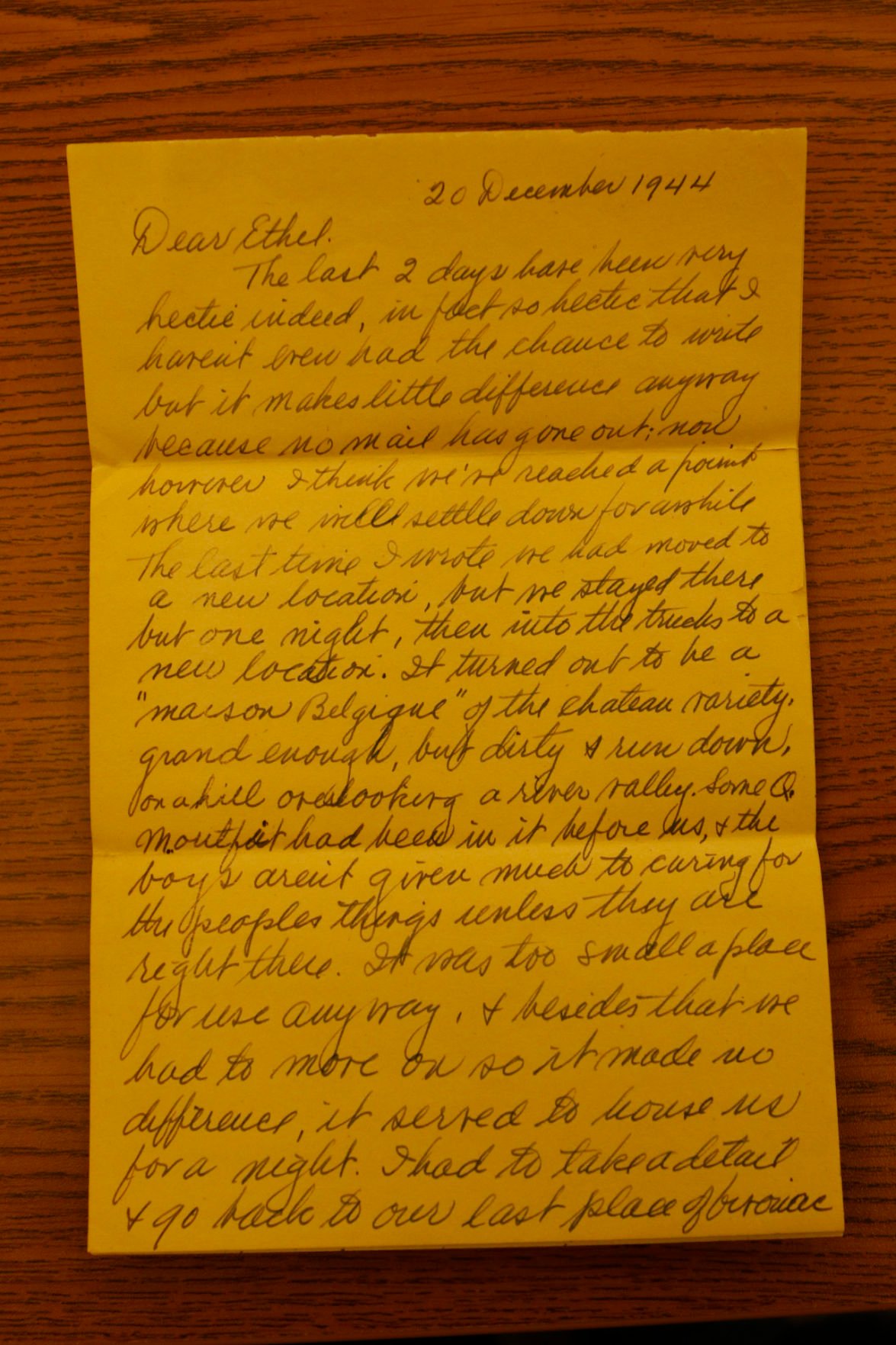 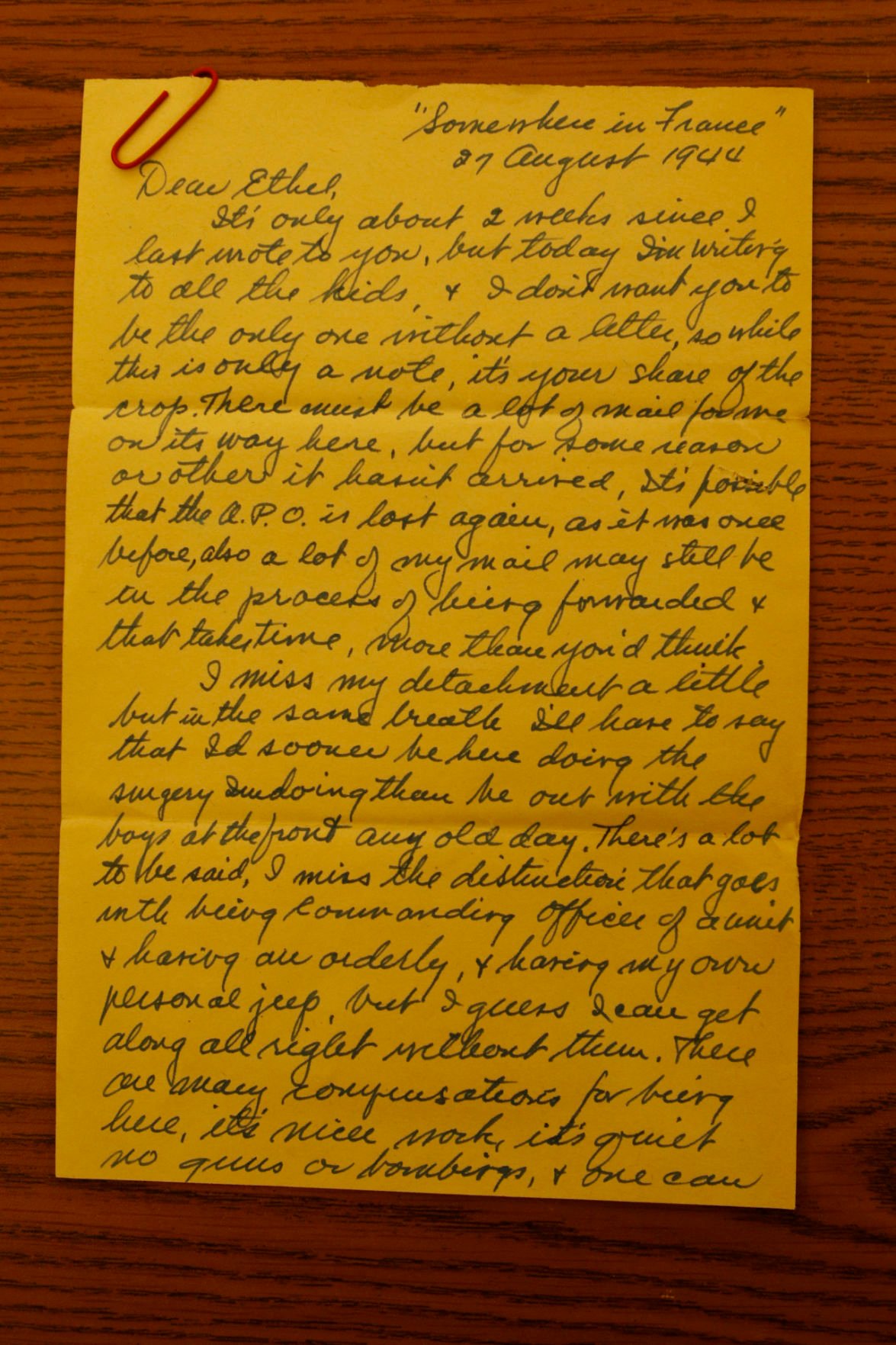 One of the many coded letters Victor Nelson sent home to his wife Mildred from Europe during the war. She would circle the first letter of the key word and draw a line to the other key word.

David Nelson has worked to crack his grandfather’s code.

One of the coded letters Victor Nelson wrote spoke openly about him being in a town in Belgium, while the code word revealed the exact town: Stavelot.

Written by his grandfather Victor Nelson during World War II, some hidden messages were simple, while others revealed information no military censor would let pass if they knew, like the town in Belgium Victor was stationed in at one point in 1944.

Victor’s coding methods varied early on, as he determined the best one to use. Knowing letters would be censored by the military but wanting to be able to share his location with his wife while stationed in Europe, he tested the codes while stationed at training centers in the U.S., where no censors were checking mail. By late 1943 he had settled on a simple yet effective method of coding that required incredible precision to write, but wasn’t too complicated for his wife, Mildred Ethel Nelson, to work out.

Victor, a major and a Regimental Army surgeon, wrote hundreds of letters to his wife over the course of the war and roughly 98% began: Dear Mildred. When a letter began Dear Ethel, she knew it was coded.

Then she picked out the first word of the first paragraph, a word that would only be found once again in the rest of text. In the letter titled “Somewhere in Belgium,” dated Oct. 6, 1944, the first key word was “owe,” as the letter started, “I owe you two letters ...”When “owe” appeared a second time in the letter, Mildred marked the letter, “o.”The second paragraph began, “You have been a great help to your auntie ...” You was the keyword. Mildred could then find the second “you” in the letter and trace a straight line from the “o” in Owe and to the “Y” in You she had found. Writing down every letter her line touched, she would make the word “Stavelot” a village where he was stationed in Belgium near Liege. A piece of information censors were always on the lookout to eliminate, David said.

He has found ten more such coded letters of villages where his grandfather was stationed in Belgium and France. The coding method required precision on both ends. Victor had to write entire handwritten letters while considering the line his wife would be making over certain letters. Mildred was required to decode the letter and draw a perfectly straight line.

David said his grandfather knew the risk he was taking in doing this. He once wrote to his wife about a captain who had been court-martialed for mentioning a village location in the text.

“I’m sure a lot of soldiers did similar things,” David said. “But if you got caught it was no joke.”

But Victor wanted to be thorough and give his wife all of the information he could. In his perfect script, he did so.

His grandson also likes to be thorough and to persevere. Four years ago he was diagnosed with stage four colon cancer. He said his prognosis wasn’t good, but for four years he beat the odds, still working as a full-time substitute teacher at Cody High and Middle School and doing everything he loved – whitewater kayaking, spending time with his wife and children, and collecting oceanic artifacts — he had been a Peace Corps Volunteer in the Marshall Islands 1987-1989, living as the only foreigner in a grass hut, without electricity, running water or shopping.

Less than a month ago he stopped responding to cancer treatments. He had to leave his job and within weeks he was on home hospice. He now uses a walker but on Sunday, his kayak club took him out for one last supervised whitewater ride.

When he was diagnosed four years ago, David set out five goals, including restoring an 1893 bike, digitizing his fathers 7,000 world circumnavigation slides and reading his grandfather’s 400 letters.

He has gotten through around 200 of them, although he said his grandmother’s letters were actually more interesting.

“She once wrote her congressman asking him to send her husband home because her kids were out of control,” David said.

Last year he had also worked tirelessly to accomplish a goal of his father’s, to get the government to award all of Victor’s unawarded military medals including a bronze and silver star. While his grandfather wouldn’t speak of the war – except a story about a group of Germans who jumped him, but upon realizing he was a doctor, quickly let him go – the family always knew of the coded letters, just not how to crack them.

What made it hard was his grandfather played around with a variety of codes before settling on the deceptively simple one. In a letter sent home from training camp, Victor laid it out to Mildred.

“This is how we’re going to communicate,” he wrote.

Victor Nelson Victor was born on Feb. 29, 1904, into a family of Swedish immigrants in Rock Creek, Minnesota. They were against education and kicked him out of the house at 16 for not becoming a farmer. He got a job on the Packard Automobile assembly line and single-handedly put himself through medical school.

Victor saw it as his duty to go to the war, but Mildred was against it. He signed up anyway after an over age 3 child exemption request was approved.

A short story from a Michigan newspaper outlines his time as regimental surgeon for the 9th Infantry, 2nd Division.

“Christmas, 1944, he found him directly behind the German lines when the big push came. They had to evacuate so quickly they lost all their equipment and personal belongings,” the article reads in part. Out of cigarettes, this is when Victor quit smoking.

The article concludes with the major being discharged at the end of the war, returning home to his wife and three children, and heading to a summer cottage on Lake Erie.

Victor died in 1982 and Mildred died the following year, neither having revealed the key to the code. However, their letters revealed so much more history to their children and grandchildren.

Victor had seen far more than he would tell his family or would be reported in the newspapers. Among his possessions is a pass to enter the Nazi concentration camp of Buchenwald. When David had the chance to look through his grandfather’s letters, he found many from people whom Victor had treated during the war: American soldiers, French/Belgium noncombatants and even German POWs.

“He helped a lot of people,” David said.

David, too, has received a lot of letters recently as his condition has worsened, many written by former students. He said he had no idea he has impacted so many lives.

“I just tried to show love and kindness – I never knew I left a legacy,” he said.

“I’m passing away. I had a good life and I did my best. I’ve got a great family, kids and friends. I’m so blessed.  I’m thankful for my life-even though I only have weeks left.

“My projects are done.”

A memorial is planned for late August in Cody.

A legacy project of David Nelson’s was to restore a 1978 911SC Porsche automobile for his son to inherit when he graduates college.

David, his son Garrett and his son’s friends are doing all the body work and Reno Collision Center is doing a paint job to honor his request. It will be a 20-20 paint job – David said it will look good at 20 miles an hour from 20 feet.

The car will be Garrett’s toy, not a show car.