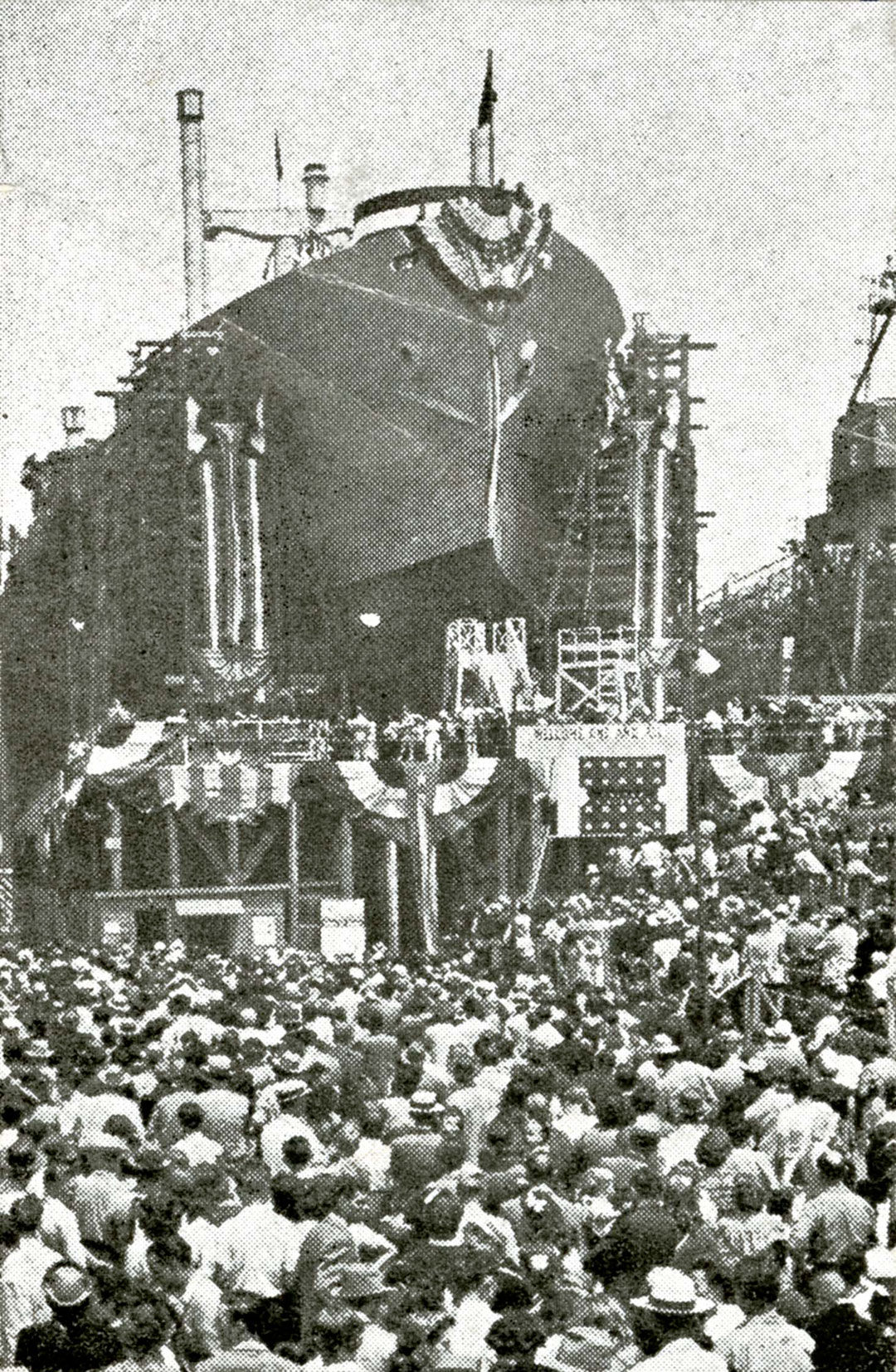 During World War II, the U.S. Maritime Commission named Victory ships such as the one above for towns in various states. The SS Cody, launched Dec. 15, 1944, was the 35th Victory ship built by the California Shipbuilding Corporation. 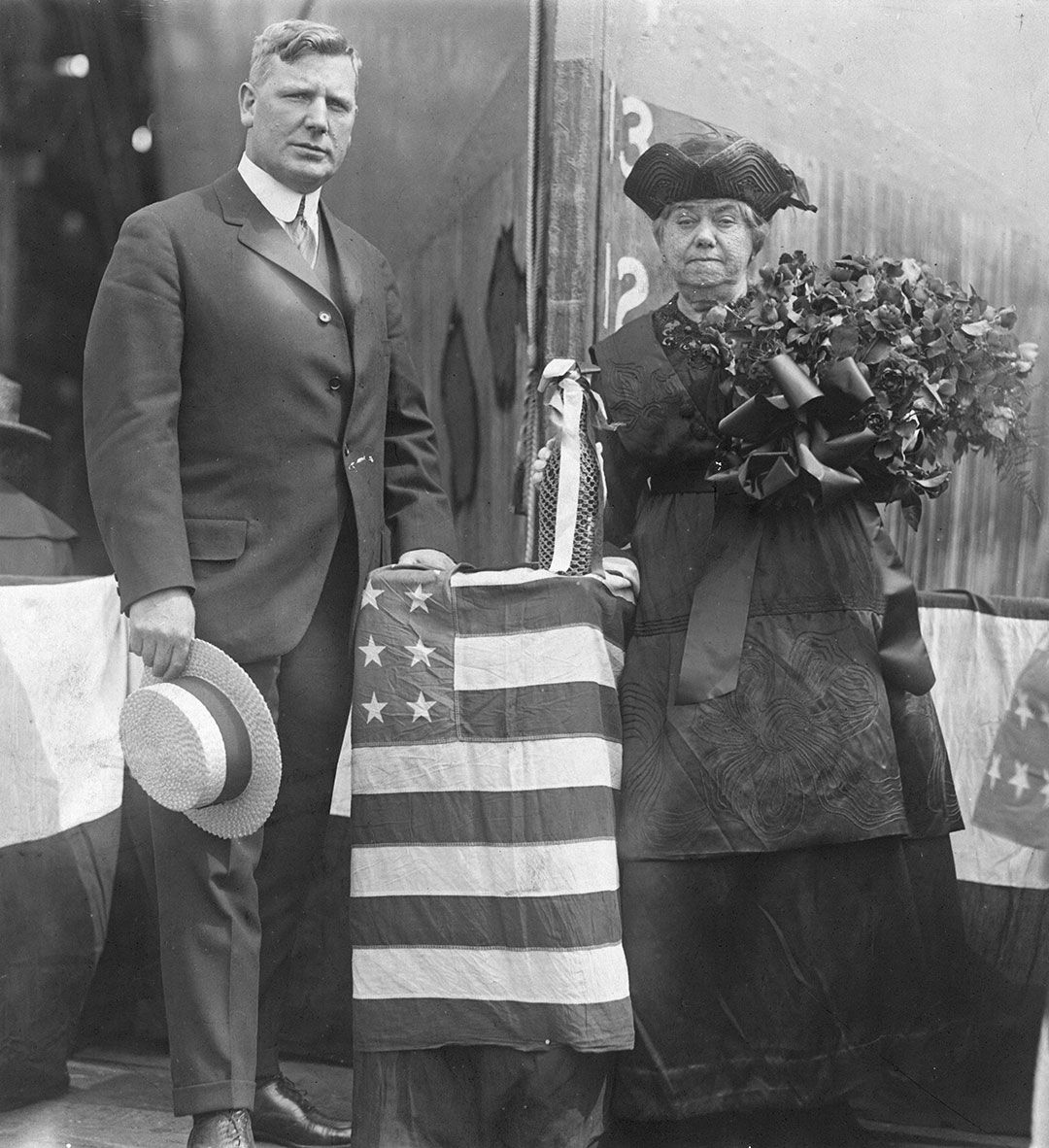 Standing at the bow of the WWI-era SS Cody cargo ship, Louisa Cody holds a bouquet of flowers presented by North Fork dude ranch owner Fred Morris, representing the U.S. Shipping Board. Buffalo Bill’s widow christened the ship on June 19, 1920, at its launching into the Delaware River at Hog Island, Pa. 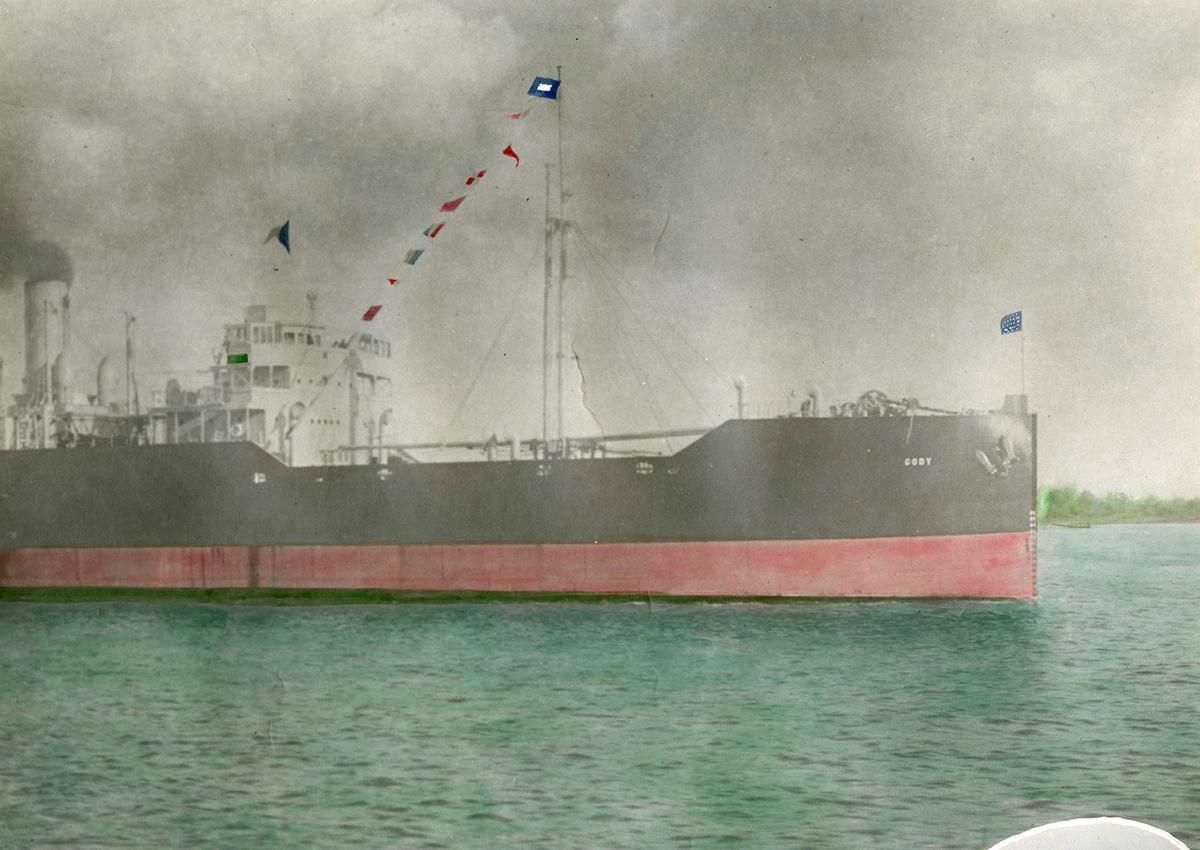 During World War II, the U.S. Maritime Commission named Victory ships such as the one above for towns in various states. The SS Cody, launched Dec. 15, 1944, was the 35th Victory ship built by the California Shipbuilding Corporation.

Standing at the bow of the WWI-era SS Cody cargo ship, Louisa Cody holds a bouquet of flowers presented by North Fork dude ranch owner Fred Morris, representing the U.S. Shipping Board. Buffalo Bill’s widow christened the ship on June 19, 1920, at its launching into the Delaware River at Hog Island, Pa.

Although the future USNS Cody, an Expeditionary Fast Transport cargo ship, is the first Navy ship named in honor of Cody, over the past 100 years, at least two other U.S. vessels have carried the city’s name across the high seas during wartime.

The former Cody namesakes were cargo or merchant ships designed to carry the materials of war. They were put to work transporting people and goods during times of peace.

In 1917, as part of the World War I effort, the U.S. government contracted with American International Shipbuilding Corp. to build ships at a Hog Island, Pa., shipyard. Ship building continued there until 1921.

The first SS Cody, named after the city of Cody and its founder, was put into service nearly two years after the November 1918 end of World War I. In fact, none of the Hog Island ships were completed in time to participate in WWI; however, many were used during the second world war.

According to the Smithsonian National Museum of American History website, the U.S. learned how to mass-produce merchant ships during World War I.

During WWII, under an emergency ship-building program, the cargo ships were produced in large numbers by North American shipyards to replace losses caused by German submarines.

The SS Cody Victory, launched in 1944 by the California Shipbuilding Co. in Los Angeles, was among the 534 Victory ships built for use during World War II.

Now, 75 years later, the U.S. Navy secretary has named a ship in recognition of Cody.

“The future USNS Cody is the first ship named in honor of the city of Cody, Wyo,” wrote the Secretary of the Navy public affairs officer to Mayor Matt Hall.

Navy historians in Washington, D.C., are unable to find official records about any other U.S. Navy ship named for Cody, he said.

“Victory ships do not appear to have ever been commissioned as U.S. naval vessels per se, and retained their ‘SS’ designation as civilian ships despite their having been constructed and put into operation at the behest of the U.S. War Shipping Administration for specific military-logistical purposes,” Day said.

“So we believe it is safe to say USNS Cody will be the first U.S. naval vessel named in honor of Cody, Wyoming,” Day said.

In a June 1920 front-page story titled “The Good Ship Cody Slides into Water,” the Enterprise informed readers Louisa Cody, widow of town founder Col. William F. “Buffalo Bill” Cody, had gone to Philadelphia to christen the 9,000-ton steel merchant ship SS Cody as it was launched at the Hog Island Shipyard into the Delaware River.

At that time, Cody native and rancher pioneer Fred Morris was in charge of a shipyard at Hog Island and he was pictured with Louisa Cody in newspapers covering the event. The website billcodyranch.com says Morris owned the Broken H. Dude Ranch on the North Fork for nearly 45 years.

Male passengers on the vessel gave three rousing cheers as the SS Cody glided into the Delaware River, reported the Hog Island News.

“I christen the Cody in honor of my late husband and the war work of the citizens of Cody, Wyoming,” Louisa Cody said as she smashed the brown glass bottle against the bow in front of diplomats, statesmen, millionaires, society folk and representatives from Wyoming as spectators.

“It was not a ‘soft’ drink, but real champagne that broke on the dock of the good ship ‘Cody’ as she launched,” the Enterprise said.

The story went on to call the launching a triumph for the Cody Club, which had put much effort into convincing the shipping board to use Cody because the town name was also the Army colonel’s and naming vessels after individuals was prohibited.

Reporting on the same event, the Hog Island News said the huge, steel ship started down the Delaware amid the cheers of nearly a thousand spectators and the blowing of whistles on river and harbor craft.

The ship-christening champagne bottle, which broke at the neck as designed, with its original red, white and blue ribbons is kept at the Buffalo Bill Center along with the gold bar pin set with pearls and onyx presented to Louisa Cody on behalf of the shipping board.

When America entered World War II, Morris, who had remained connected to government shipbuilding at Hog Island, went to the West Coast and soon became superintendent of the California Shipbuilding yards in Wilmington, Calf.

The Town of Cody had chosen resident Mrs. Lonie Prante as sponsor. She would represent the mothers of WWII whose sons were in the service. The ceremony to launch the big freighter into the Pacific Ocean was exactly one year after her son Lt. Dean Vanderhoff of the Army Air Corp was killed while piloting a night fighter in the South Pacific, reported the Enterprise.

The U.S. was building Victory ships in increasing numbers to replace the older and slower Liberty ships.

“A Victory ship, one of the vast merchant fleet now being constructed in the nation’s shipyards to carry forward the materials of war and bid for the economic rules of the seas in the years ahead, was given a heart, a soul and a tradition last Friday when it was christened by Mrs. Lonie Prante of Cody,” the Enterprise reported on Dec. 20, 1944, in a front-page story titled “Victory Ship Christened in Honor of Buffalo Bill.”

According to the news story, the ship was the second launched honoring “the great frontiersman.” The Buffalo Bill was christened July 26, 1942.

Providing further information about Morris, the Enterprise said he and his wife had ranched in Cody Country for a “great many years” and their son Leonard and his wife were running the original family ranch on the North Fork at the time of the SS Cody christening.

The Victory ship had more power than the earlier Liberty ship, was slightly larger and had more powerful steam-turbine engines, which allowed participation in high speed convoys and made the ships more difficult targets for German U-boats.

One notable person to serve on the Cody Victory was Burt Lancaster, an Oscar-winning movie actor who joined the Army shortly after the bombing of Pearl Harbor. His division was on the SS Cody on Aug. 14, 1945, as the ship was at sea heading to Hampton Roads, Va., when the V-J Day announcement was made. The SS Cody began boarding troops for safe delivery home.

“Designed with an eye toward the post-war period as well as present day needs, the SS Cody should have a long and useful life in carrying U.S. products to the far corners of the world following its urgent and necessary supply runs to the fighting men in the Pacific,” the Enterprise said in concluding its report of the christening.

After the war the SS Cody was eventually sold to private businesses and the ship underwent several name changes. It reportedly sank 1,000 miles southwest of San Francisco in 1969.