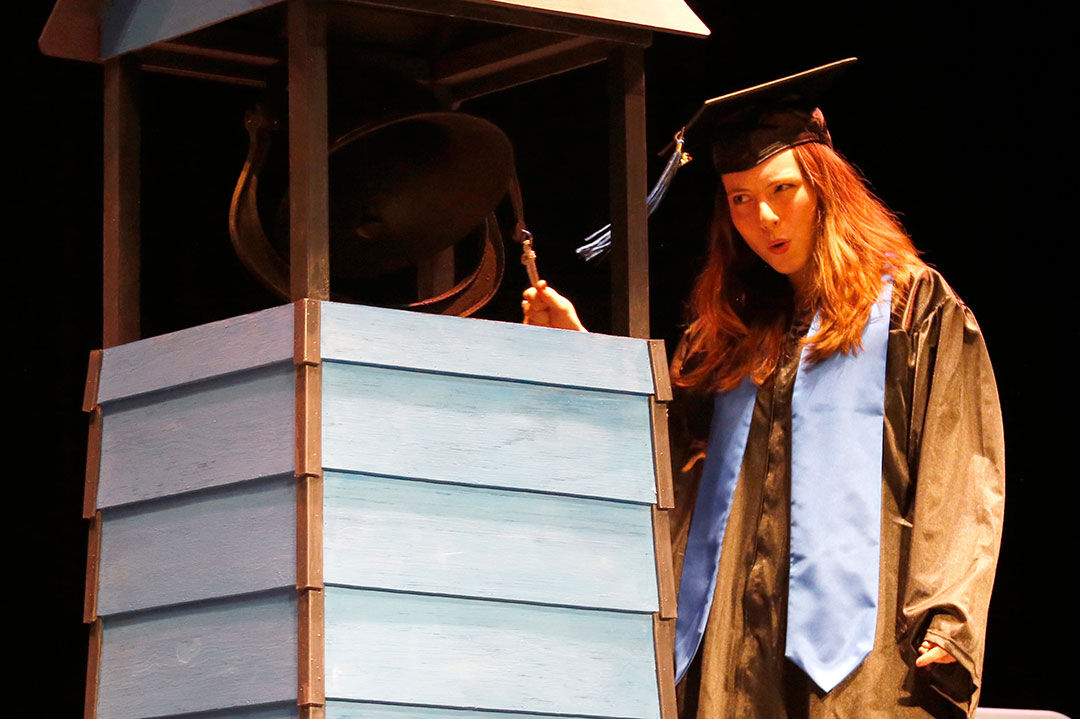 Sumpter-Mota rings the HMA bell, a tradition that began last year, before receiving her diploma. 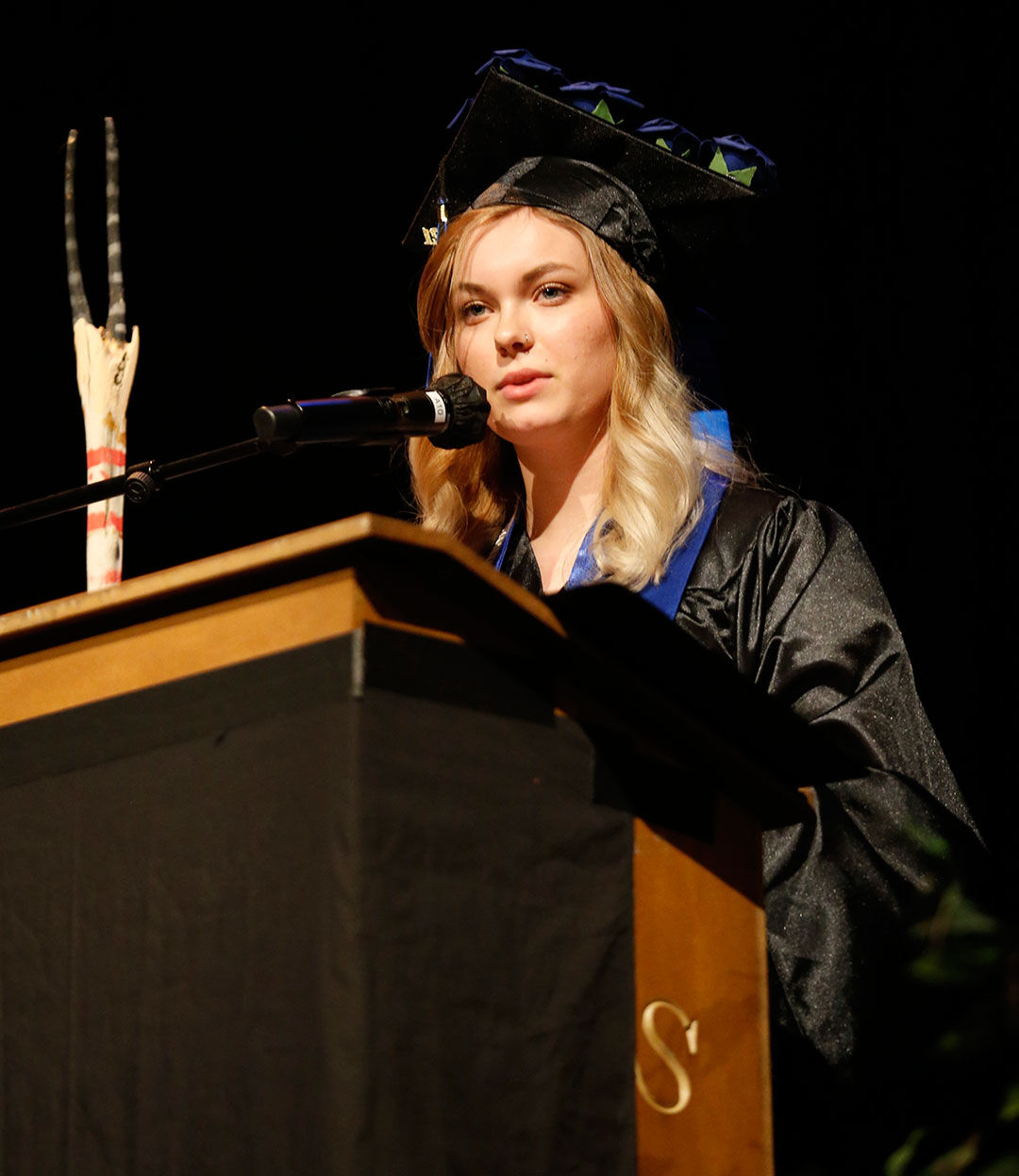 During her speech Olmstead talks about a stick she decorated her freshman year. 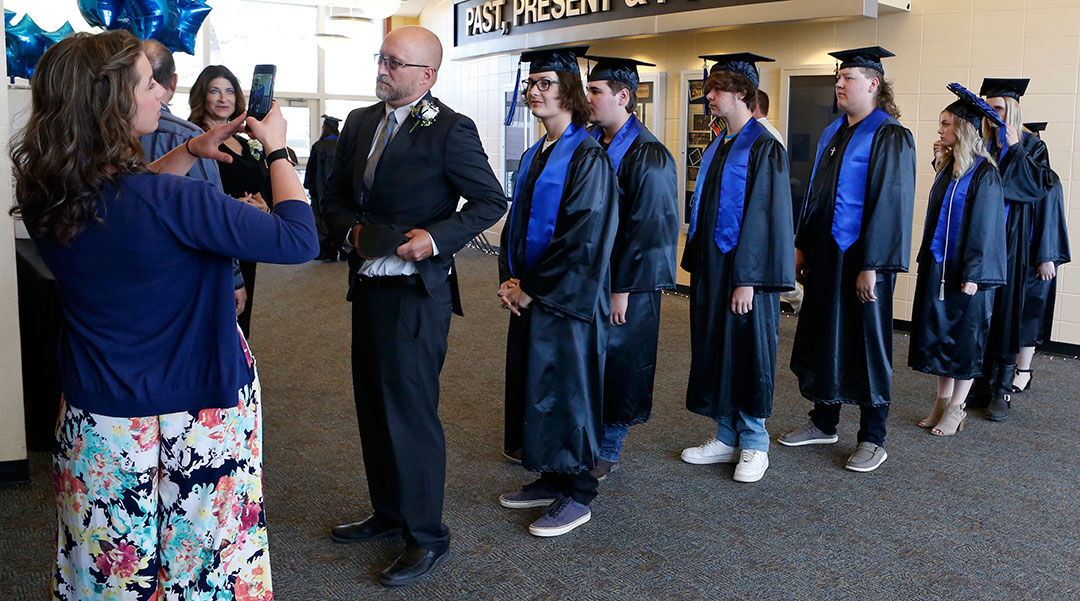 Teacher Stephanie Gabriel takes a photo of fellow teacher Ryan Nelson and the HMA graduates before they entered the auditorium. 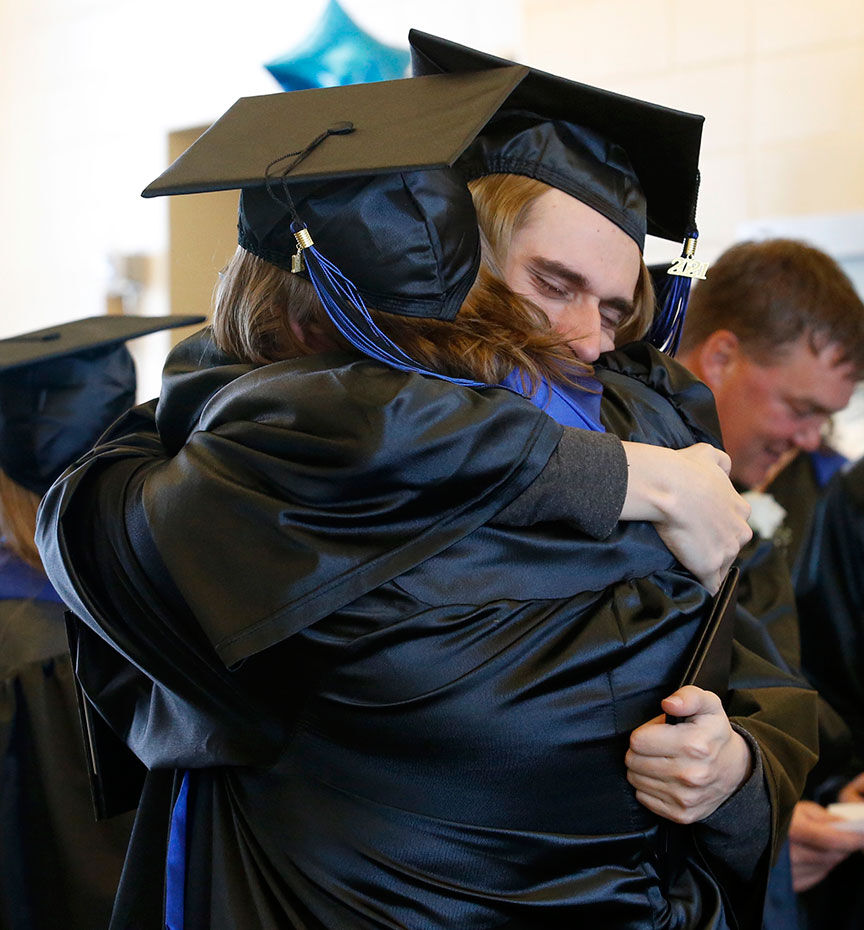 Sumpter-Mota rings the HMA bell, a tradition that began last year, before receiving her diploma.

During her speech Olmstead talks about a stick she decorated her freshman year.

Teacher Stephanie Gabriel takes a photo of fellow teacher Ryan Nelson and the HMA graduates before they entered the auditorium.

Heart Mountain Academy graduate Ethan Little will remember most the humor at the alternative high school. The ability for teachers to joke with students and teach them.

It certainly worked for Little. He was one of 16 graduates who were honored Friday night at Wynona Thompson Auditorium.

“It’s a very tight knit group of people,” he said. “The teachers feel like family because they care for you.”

Friday night just about every part of the ceremony included nods to the family, both on the stage and in the audience, that helped get the students to graduation.

Student speaker Sierra Olmstead, who is headed to Montana State University in the fall to study early childhood education, said she had desperately wanted to get into HMA as a freshman. She was accepted and on her first day, she had her nose to the grindstone. She said despite that, she kept hearing laughter, sounds of a teacher racing students down the hall.

Later that year she went on a trip to Clearwater Campground, decorating a stick to look like a gazelle, with intricate markings below the head. Students she hadn’t yet talked to told her they liked it. Then a teacher threw a student in the water, leading to more laughter.

It was then she realized, along with a group of other students that didn’t fit the “cookie cutter definition of high school,” that she felt she truly belonged.

At the close of her speech, Olmstead stepped away from the podium and returned with the stick she decorated freshman year. It was her gift to the teachers and staff at the school she said had made her successful.

She said these were the people that encouraged her to return to theater, culminating in what she said was a great junior year on the stage.

For many of the graduates, walking across the stage to receive a diploma was recognition of an accomplishment they had finished months before. A number completed their studies in March. One drove down from Billings, where she now lives, to attend the event. Two were already living in other states, with one already diving into the workforce in his trade. Others were still musing their next steps.

“I am so proud of each and every one of you,” Principal Beth Blatt said at the close of her speech. “Now go forth and just be.”

“I feel good,” he said in between pictures with family and friends, still donning cap and gown. “I’m happy to be done. I’m ready to go out into the world.”