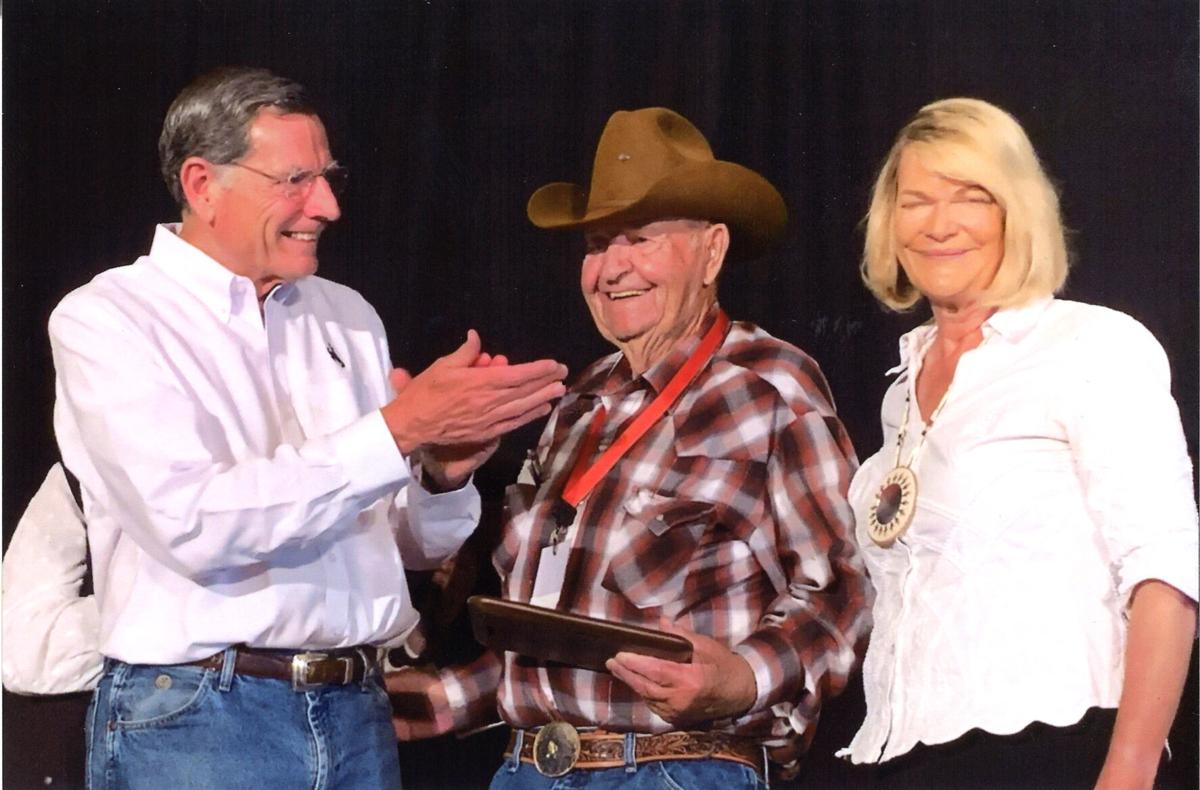 Dale Sims (center) is inducted into the Wyoming Cowboy Hall of Fame by U.S. Sens. John Barasso (left) and Cynthia Lummis on Sept. 11 in Cheyenne. Sims was a 2020 inductee and the only living Park County recipient. 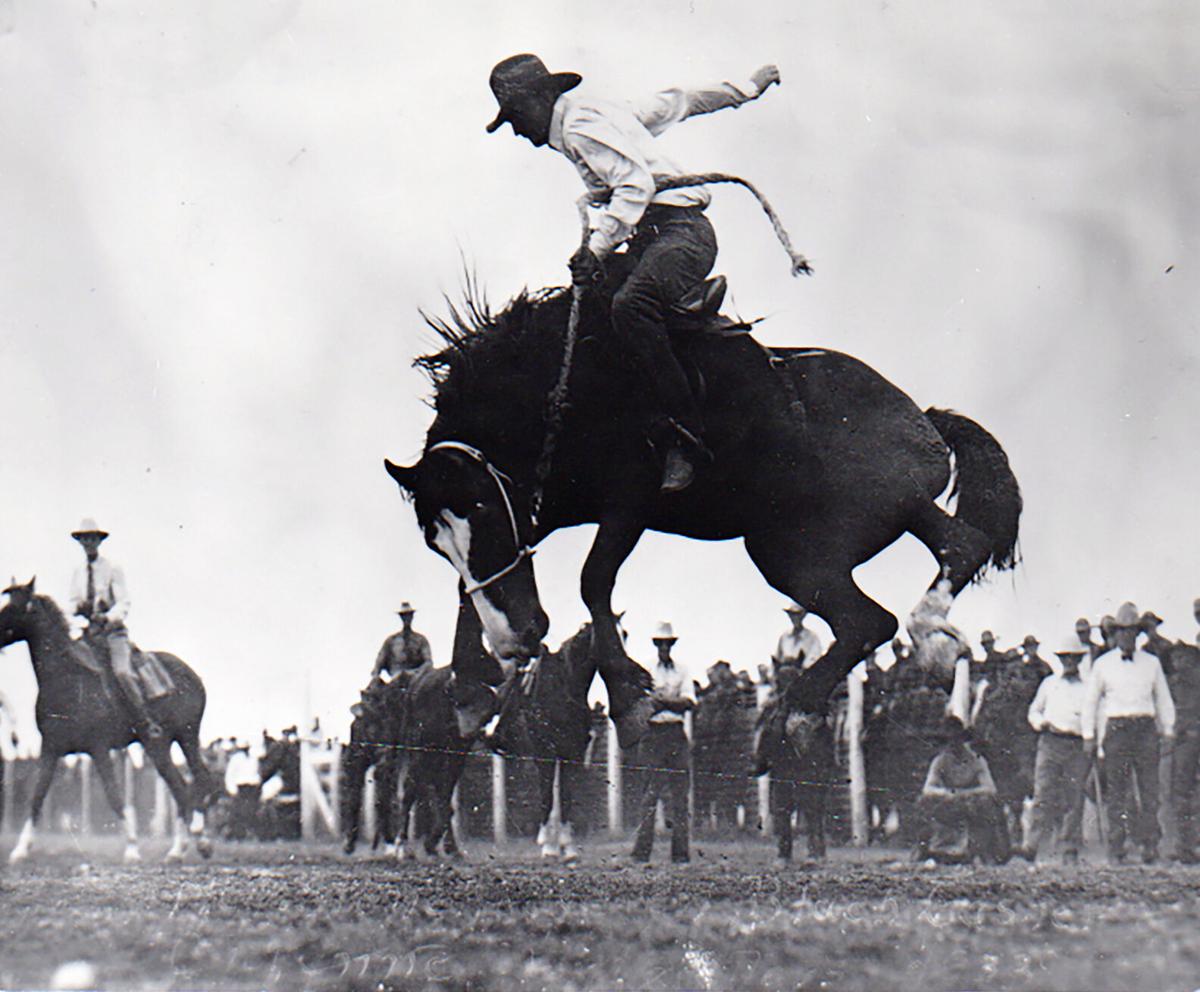 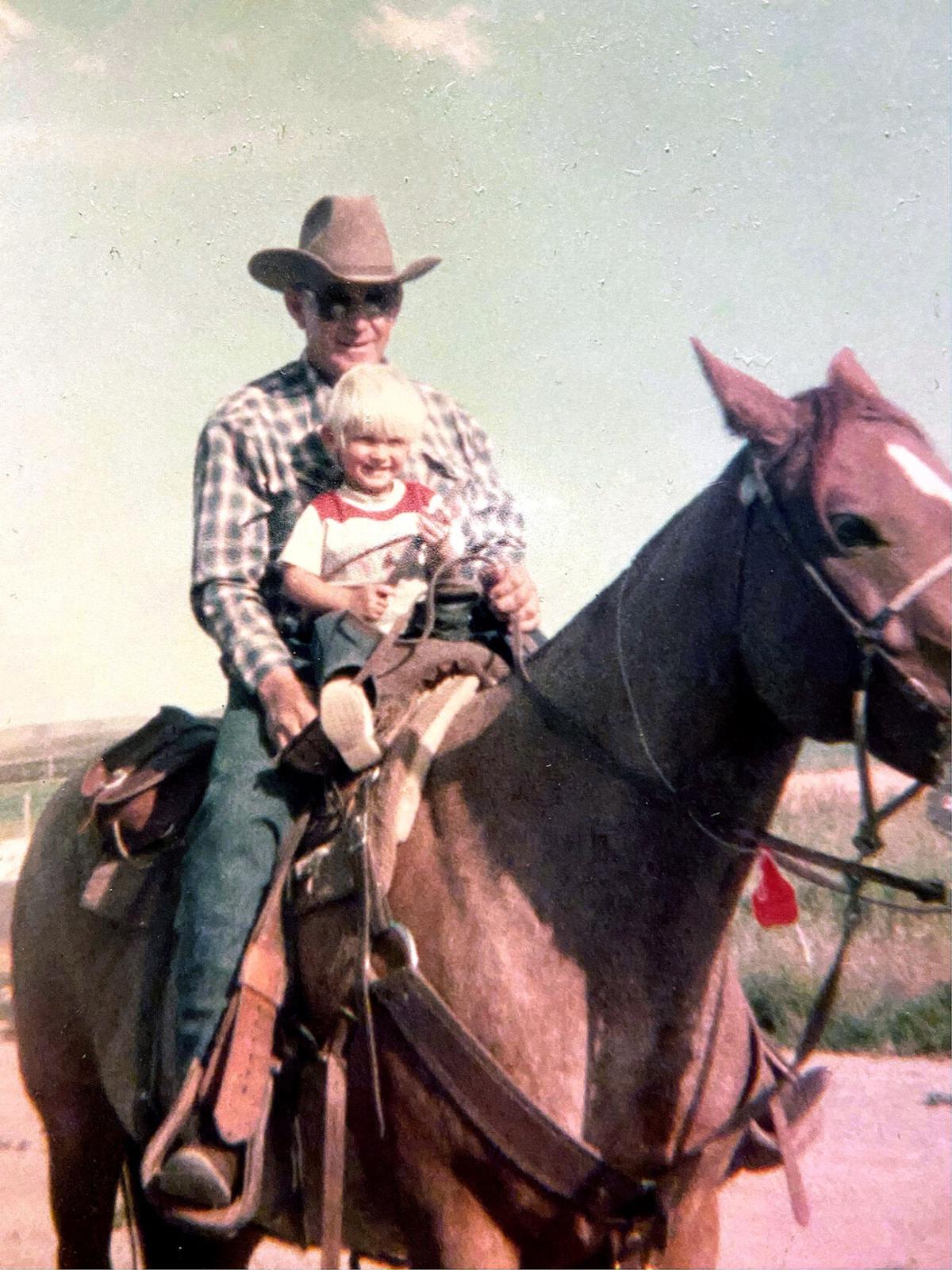 Earl Curtis ran the Two Dot Ranch with his family and owned a ranch on the South Fork. 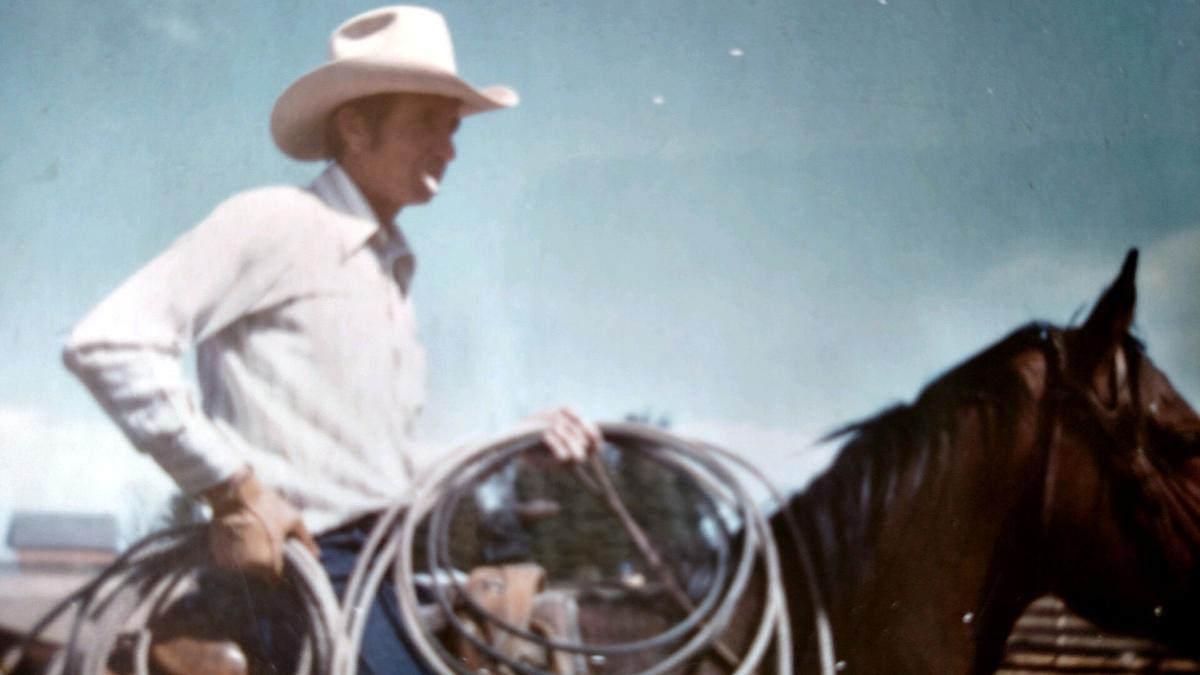 Above, Dick Skeen worked on ranches throughout the state and lived in Powell for many years. He was the only 2021 inductee from Park County.

Dale Sims (center) is inducted into the Wyoming Cowboy Hall of Fame by U.S. Sens. John Barasso (left) and Cynthia Lummis on Sept. 11 in Cheyenne. Sims was a 2020 inductee and the only living Park County recipient.

Earl Curtis ran the Two Dot Ranch with his family and owned a ranch on the South Fork.

Above, Dick Skeen worked on ranches throughout the state and lived in Powell for many years. He was the only 2021 inductee from Park County.

Four local cowboys were recognized in Cheyenne as inductees to the Cowboy Hall of Fame on Sept. 11-12 from 2021 and 2020. Dale Sims, Mel Stonehouse, Dick Skeen and Earl Curtis were all honored for their lifetime dedication to ranching and their work as cowboys.

Dale Sims of Cody was the only living recipient out of the four.

Growing up along the Greybull River, Sims said every animal they had was roped for ranching.

“I always wanted to be a cowboy,” he said.

Sims, 84, was born in Greybull and attended school until his junior year when he married Bonnie LaRose Coguill in 1955.

The couple moved to the TE Ranch on the South Fork in 1957. There, they would raise three children and then work at various other ranches for the next 45 years.

Sims also worked at the Belknap and Diamond Bar ranches, as well as Stire’s Cattle Company. He finished his full-time cowboy career at the Double Diamond X Ranch in 2002.

For nearly 20 years now, Sims has been helping his neighbors and friends with their ranches and cattle. He also has taken children and grandchildren on numerous pack trips to the mountains, teaching them the cowboy way of life, the value of hard work and good ethics.

Nominator and granddaughter Heidi Rasmussen said, “I have no doubt that he will be branding calves and fixing fence until the day he passes.”

Stonehouse lived an incredible life, fit for a Hollywood movie. His father froze to death in a snowstorm in Colorado when Stonehouse was 3.

He was placed in a Denver orphanage but did not do well there, and eventually escaped at the age of 7. Stonehouse had to grow up fast and did the best he could, bouncing from one ranch to another, struggling to find enough work to survive.

“Some of the people he worked with he spoke very highly of, and others, the things they did to him were just brutal,” his son Rick Stonehouse said. “He was just a little survivor.”

Eventually, he ended up in Tijuana, Mexico, where he worked as a jockey. It was there he made the acquaintance of stock contractor Ed McCarty, who brought Mel Stonehouse to the McCarty Ranch near Chugwater. He worked there and learned to ride broncs, eventually entering his first rodeo at the age of 16.

Stonehouse quickly made a name for himself in rodeo and traveled to England and Australia riding broncs as part of an American team. While recovering from an injury suffered during the Cody Stampede Rodeo in 1938, Stonehouse met his future wife Irene Way.

It was around this time Stonehouse started guiding hunting and fishing trips in northwest Wyoming and started to build a successful outfitting business. Some of his clients included Roy Rogers and Col. Jimmy Doolittle.

Rick Stonehouse described his father as tough but loving, a man small in stature but not in heart or strength.

“He would kick anybody’s ass,” he said.

During his middle years, Stonehouse could be found in the mountains or managing the J Bar 9 Ranch on the South Fork. By 1950, Stonehouse had retired from rodeo and turned his focus to his young family and outfitting, but was coaxed out of retirement for one last rodeo that year.

In that rodeo, a bronco ran him into the fence and broke his leg badly. After many years of pain, Stonehouse had his leg amputated. This didn’t stop him from getting in the saddle, and he would go on to build a prize herd of longhorn cattle over the next decade, never letting his prosthetic get in the way.

Stonehouse later worked on a small ranch and continued tending cattle and building fences until his death from lung cancer in 1989.

He was featured in a historical exhibit about the Cody Stampede at the Buffalo Bill Center of the West in 2019, and Cactus Productions is planning to make a documentary about the man.

“There’s really been a new wave of interest about his story,” Rick Stonehouse said.

Skeen was born in Hyattville in 1928 and spent his early years growing up in camps while his dad built roads in Yellowstone National Park. When his father passed away, Skeen and his family moved back to Hyattville, where his mother met his stepfather.

Skeen worked on his stepfather’s ranch, breaking horses and performing other tasks. He also did part-time work for the Hyatt Ranch, trailing cows to break in the colts.

After high school Skeen went to the Hayes Ranch in Thermopolis where he lived the life of a true cowboy, sleeping in a sheep wagon on the Black Mountain pasture where he broke colts. From there, Skeen went to a ranch in Arizona with a childhood friend.

As Skeen’s life changed, one constant was his identity as a cowboy.

In 1952 he married Dorothy Myers and moved back to Hyattville. He continued to work on various ranches around Hyattville and trained horses with Dr. Jim Baker even though he was working for Mobil Oil in Casper at the time.

By 1963 he became a brand inspector for the State of Wyoming, a job that brought him four years later to Powell where he and Dorothy would raise their children. Skeen enjoyed this profession since he knew the people, country and livestock. It also gave him contacts for who needed help moving cows or breaking colts.

“He taught us the value of honesty and that a handshake is how you clinched the deal,” said his son Frank Skeen. “You didn’t have to have a contract.”

Skeen developed a partnership with Powell veterinarian Dr. Gene Bischoff with whom he would work cows and buy colts. He had a particular talent for shoeing horses and taught a class in Cody on how to be a farrier.

Skeen and his wife ultimately purchased an 80-acre farm that provided pasture for his heifers. They built an arena on the farm and held roping events every weekend.

During the summer months Skeen was very active with Cody Nite Rodeo. He served as a judge and Dorothy was a timer, giving their three kids an exciting environment in which to grow up in.

Around 1981, Dick Skeen went to work on the Fiddle Back Ranch in Meeteetse as a manager. Dorothy became ill a few years later, which caused them to move back to Thermopolis to be closer to family. Skeen kept ranching until 1992 when Dorothy passed away. He passed away in 2006.

“We’re so proud of him,” said Frank Skeen.

Curtis lived a ranching life from the moment he was born on the Pitchfork Ranch in Meeteetse in 1931. While growing up, he learned how to break and shoe horses. He also learned to rope by the age of 11 and spent nearly all his free time working on the ranch.

After high school, he married Frances Hamby and kept working on the family ranch. The family moved to Big Timber, Mont., where they leased a ranch for three years before returning to Park County where they leased the W Bar Ranch on the Wood River, running 500 head of Herefords on the 5,000-ranch.

Curtis and his family later bought the Two Dot Ranch in Cody in 1963. On the 250,000 acres they ran 2,500 Angus cows and more than 100 American quarter horses. Curtis was specifically in charge of the cattle operations.

Curtis taught his children how to ride horses, rope off horses and the everyday ranching lifestyle. Each branding season, he would teach them how to rope, vaccinate and move the calves. He was also in charge of planning the ranch’s three annual brandings and gatherings of the cows, which was a full-on family affair.

“He taught us how to work, how to have good values,” his daughter Linda Curtis said. “I learned a lot from my dad and grandpa.”

After the branding was done, Curtis would then divide the cows between the Bald Ridge and Pat O’Hara cow camps.

“​​I remember that when it was calving season that it would be snowing, and we had to go and help dad check the cows to see if they were having trouble calving,” Linda Curtis said.

Curtis worked from 4 a.m. to sunset seven-days a week. Linda Curtis said her father would routinely get stopped by tourists asking if he were carrying a pistol because he was fighting Native Americans.

“He would say yes and completely play it up,” she said, despite the real reason being for rattlesnakes. “He was the true cowboy.”

Curtis would run cows up Paint Creek and the Natural Corral, and in the winter moved them to the Polecat Bench, where most of the calving was done. Curtis did all the dirty work necessary, loading the truck with hay and breaking up the ice so the cows could get to water.

When it was time to ship the cows, Curtis was also in charge. He would sort the cows for sale and organize the trucks to come to the ranch for pick up. Then, he would run the cows himself through the vat.

In 1975 the family sold the ranch, and Curtis and his wife bought a ranch on the South Fork. It was here they continued to work in the ranching business and run horses during the autumn of their years. Curtis worked on the 711 and Diamond Bar ranches in the later years of his life until suffering a stroke. Even the stroke didn’t stop him from riding horses, and he taught all his grandchildren how to ride and take care of the equine. Curtis passed away in 2013.