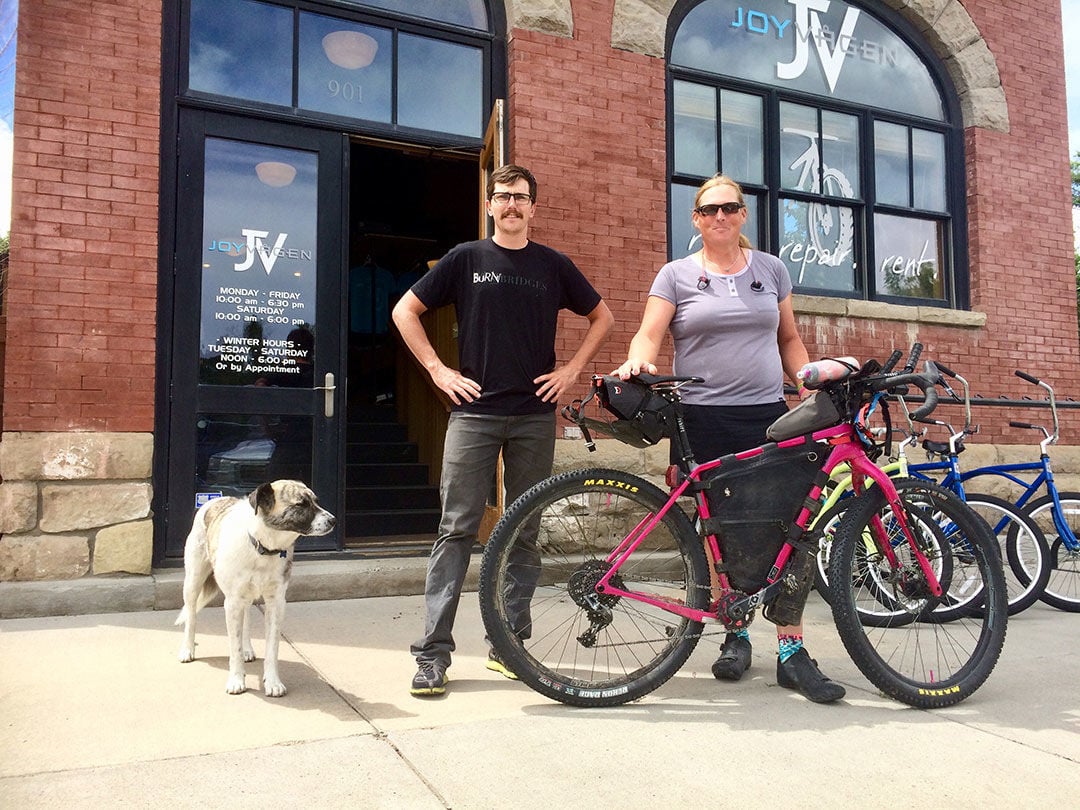 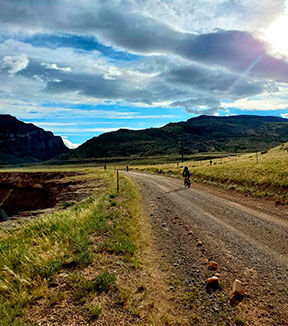 Kymberly Byers took in views like these along County Road 2AB during the “Gravel Gang” bike ride.

Kymberly Byers took in views like these along County Road 2AB during the “Gravel Gang” bike ride.

It’s not uncommon for cross-country cyclists to come through Cody in the summer, but this year in the wake of social distancing, lockdowns, and other health restrictions, trans-continental biking may be a more challenging proposition. But Kymberly Byers has found by accepting the caring hand of strangers and keeping a flexible schedule this type of adventure is still possible.

“We’re about 14 hours away from leaving here and having to decide a direction, and I have no idea,” Byers said last Tuesday afternoon. “I don’t need to know right this minute. I’ll figure it out today and in the morning I’ll take off for somewhere.”

She said she hasn’t encountered many COVID-19-related roadblocks since she usually camps and can get most of her food at gas stations.

But in DeKalb, Ill., she was tasked with a difficult conundrum with no restaurant lobbies open on a Sunday morning.

“The only thing I found open was a Dunkin’ Donuts,” she said with a chuckle. “I rolled through the drive-thru on a bike. I asked the lady, I explained the situation. She gave me the Dunkin’ Donuts food and I sat down in the parking lot, and used the parking lot as my dining room table.

Byers said she finds peace when travelling the road, an avenue of solace from judgement and demons that have haunted her in the past. Her sense of flexibility may come from the fact most challenges along the road pale in comparison to what she has already overcome.

The Salsa Cutthroat touring bike she refers to as “Sali” has helped her cross cement, dirt and the occasional pothole, now for over 2,300 miles.

“People say, ‘you can do anything,’” Byers said. “That’s the exact opposite of where my life was before.”

Byers didn’t get into cycling until recently. Prior to then she was “severely overweight” and could barely ride a mile.

“As someone who has always lived on the edge of society and as someone who hasn’t always been treated the best, cycling has given me empowerment for my own life,” Byers said. “When I started cycling it gave me the first success in my life.”

In 2016, she joined Three Rivers Velo Sport, a cycling club based out of Fort Wayne, Ind.

“The group slowed down and blocked the wind and heaped encouraging words upon me,” Byers reflected in a Facebook post about her first outing with the club. “Then when … we reached the parking lot they told me to come back. It is that single evening that changed the trajectory of my life, and this is where I have ended up.”

It was a particular friend she made there, Jennifer Bryant Altherr, that served as her ambassador to not only cycling, but also to a new life.

With Altherr she took her first week-long “bike packing” trip in 2017 along the Great Allegheny Passage in Maryland and Pennsylvania.

“I realized I need to do more of them,” she said.

When she was furloughed from her job in late April, Byers quickly decided to set out on the road, just one month later.

“I have nothing more to prove anything to myself. I just need to go out and enjoy the ride,” Byers said. “And then I have the opportunity and responsibility to share my journey with others to help try and help them realize they can do the same sort of thing. Maybe not necessarily riding their bike or whatever, but what truly makes them feel happy.”

From Indiana she traveled through Illinois and the Driftless Area of Wisconsin. In St. Cloud, Minn., she met with Susan Egbers, the widow of an ultra endurance cyclist who was struck by a car while riding.

“Basically (to) say, ‘hey Susan, your husband still lives within us in the ultra endurance cycling community. We love you,’ and just tell her that she still matters and John (Susan’s husband) still matters,” Byers said.

In Wall, S.D., a town overlooking the Black Hills, she found herself brought to tears by the sheer beauty of Badlands National Park.

“It was such a moving experience,” she said. “(I) literally wept.”

In La Crosse, Wis., Byers found herself underneath a highway underpass as violent hail cascaded down overhead.

“Well I’m safe from hail; I’m in the worst possible place for a tornado,” she recounted thinking. “I literally say out loud, ‘now what? What am I going to do?’ And an SUV pulled up.”

Byers was taken in by Amanda Coughlin, a woman who fed her tacos by candlelight. Coughlin cooked the food on a barbecue grill because the storm had knocked out power in her local area. The pair stayed up talking until the wee hours of the morning.

In Hermosa, S.D., she received help from a man named Robb Rasmussen after encountering a shifting issue with Sali. Rasmussen offered her help when he discovered Byers’ adventure on Facebook, and as luck would have it, she called in his offer.

“Never met the guy before, he came, he helped me,” she said.

Biking along soggy forest service roads in the Bighorn Mountains; at the time more akin to mud paths, she was lent a helping hand by another man after bending Sali’s derailleur.

“People aren’t biking across cross-country right now but they don’t know they can get what they need when they need it,” she said.

While in Cody, Byers brought Sali in for a quick-turnaround repair at Joyvagen Cycles. This gave her the opportunity to explore what Cody has to offer.

“I like the mixture of the old west with the cosmopolitan style,” Byers said. “Cody should be proud of this place.”

Sitting on the Irma Hotel porch she reflected on what the historic porch could say if it could talk.

Tuesday evening, she took part in a Joyvagen “Gravel Gang” bike ride on County Road 2AB, getting up close and personal views of the Shoshone River and Cedar and Rattlesnake mountains.

“Just to get an understanding for the local vibe was really awesome,” Byers said.

From Cody, Byers will go through the East Entrance to Yellowstone and later on to Colorado, Arizona and Nebraska. She plans to wrap up her voyage around the end of September.

“I’m on a journey, I’m not going to a destination,” Byers said. “I’m just on a long ride to anywhere from here.”