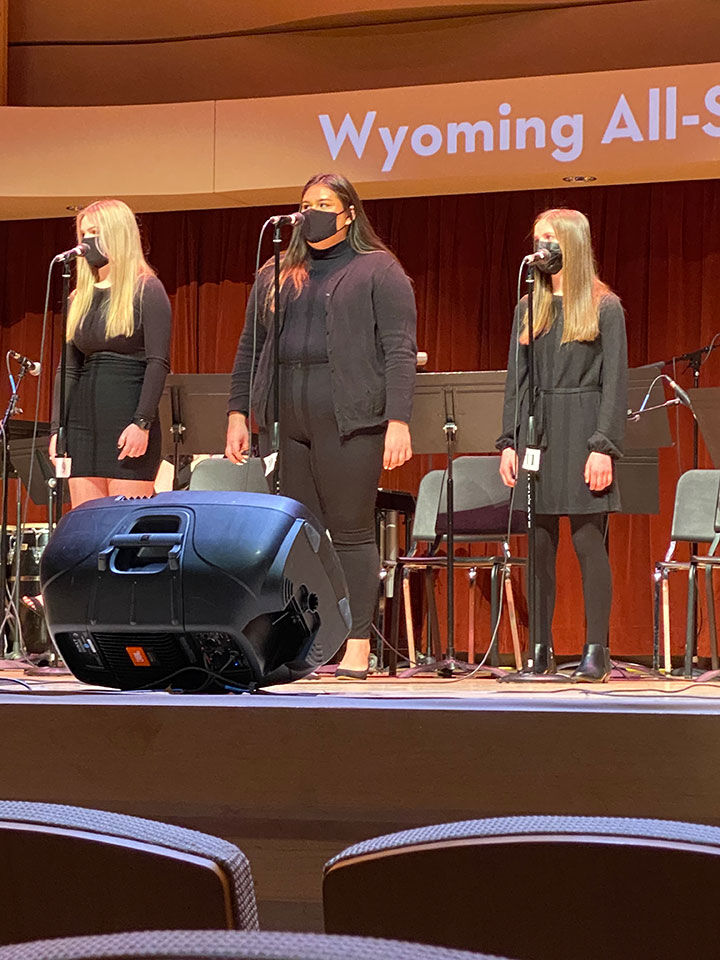 Kiana Horsen sings with other members of the All-State Vocal Jazz Choir last week in Casper. 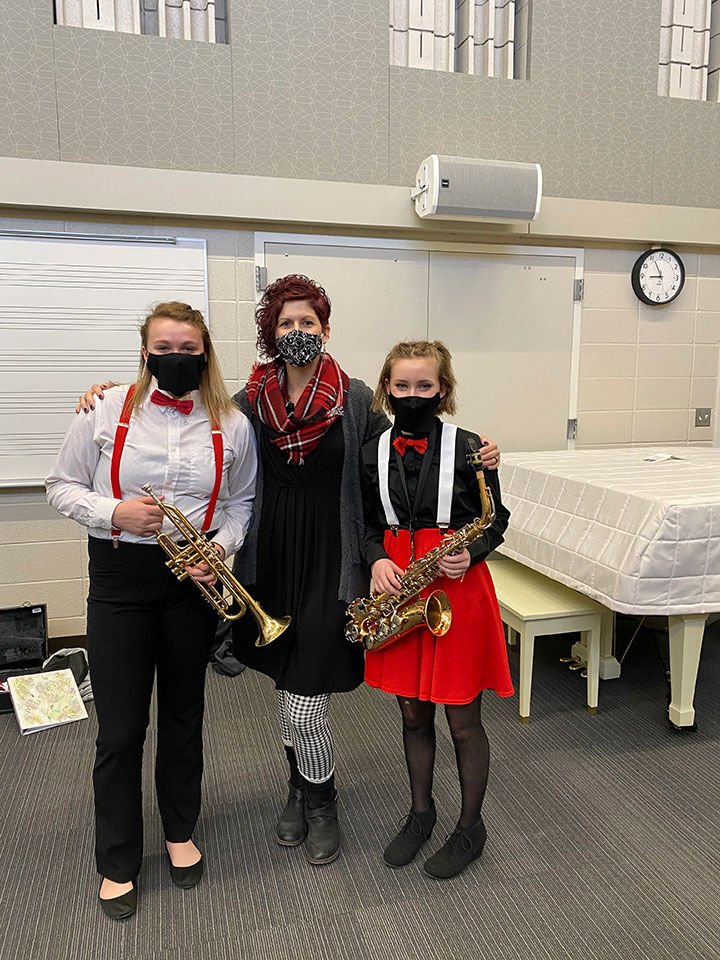 French stands between two other Meeteetse musicians who performed in Casper, Ashlee Allen and Larissa Riley. 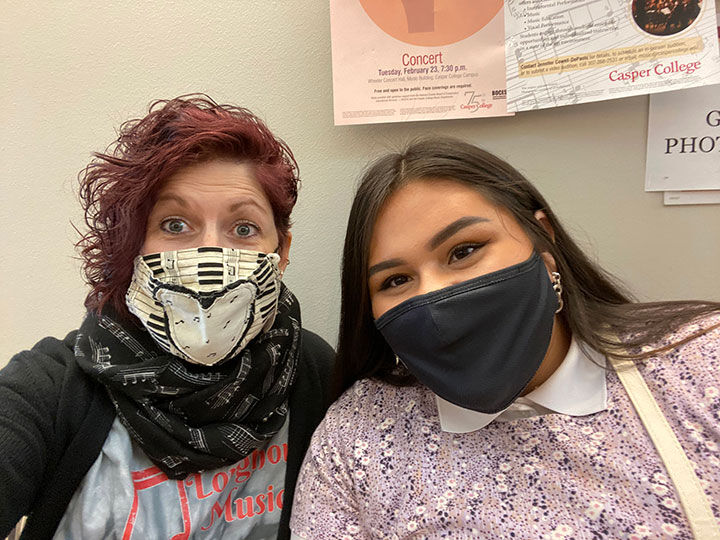 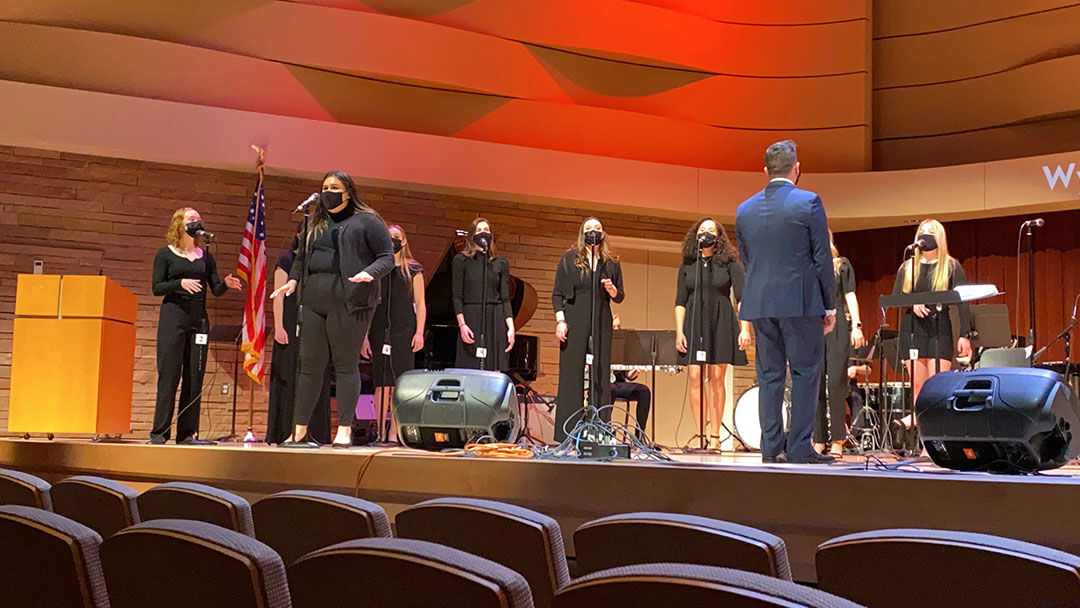 Meeteetse High School student Kiana Horsen (second from left) was one of the few in Casper chosen to perform a solo.

Kiana Horsen sings with other members of the All-State Vocal Jazz Choir last week in Casper.

French stands between two other Meeteetse musicians who performed in Casper, Ashlee Allen and Larissa Riley.

Meeteetse High School student Kiana Horsen (second from left) was one of the few in Casper chosen to perform a solo.

Kiana Horsen never took singing lessons. She never even had the chance to be in a formal choir. So when the Meeteetse student got the opportunity to perform in the Kinser Jazz Festival in Casper recently as part of the All-State Vocal Jazz Choir, she didn’t know what to expect.

“This is my first year doing music, so I had no idea what I was getting myself into,” Horsen said.

Bringing together the All-State musicians to rehearse was not an option, so Horsen had to forge her own path to learn the music – and send video check-ins along the way to make sure she was on track for the performance.

“[Practicing] really had nothing to do with my in-school stuff,” Horsen said. “I’d go in early to practice with [music teacher Carisa French].”

“Going in early” might be an understatement, if you ask Horsen’s instructor.

“I get to work at 7. School starts at 8. There were times she was walking in with me,” French said. “The amount of time that she was willing to put in at home and during school is just something you don’t see with kids that have that much natural ability.”

In addition to being the first person to ever be named to the state jazz choir from Meeteetse, Horsen was also the only student from a Park County school to get into the jazz choir this year.

It was a grueling start to the week. After arriving in Casper the night of Feb. 7, Horsen got to work, beginning rehearsals with a new group that evening, the largest choir she had ever sung with. She was one of a select few to get a solo, being featured on a song by Rosana Eckert titled “For Elizabeth.” The eighth was a 13-hour day full of rehearsals to ready the high schoolers for a Tuesday evening concert.

Horsen’s opportunity was thanks in part to French. She took over the music department in Meeteetse this school year and brought nearly three decades of experience at all levels of teaching music. She used that experience to send Meeteetse students to the jazz festival for the first time in two decades, or so French has been told. It’s just one of many opportunities French has brought to the musically inclined in the Meeteetse School District.

“They really wanted to see music expand,” French said. “Since I had been at schools where kids did everything, I was just like, ‘Well, this is what we’re going to do now.’”

Several of her students applied to be in the All-State music groups. In addition to Horsen, sophomores Ashlee Allen and Larissa Riley went to Casper to perform before judges, though they were not part of the All-State choir.

Horsen, for her part, is just thankful for another way to stretch and grow her already powerful voice.

“Mrs. French has gotten us so many good musical opportunities,” she said. “I’m really glad that our little school was able to provide that for me.”