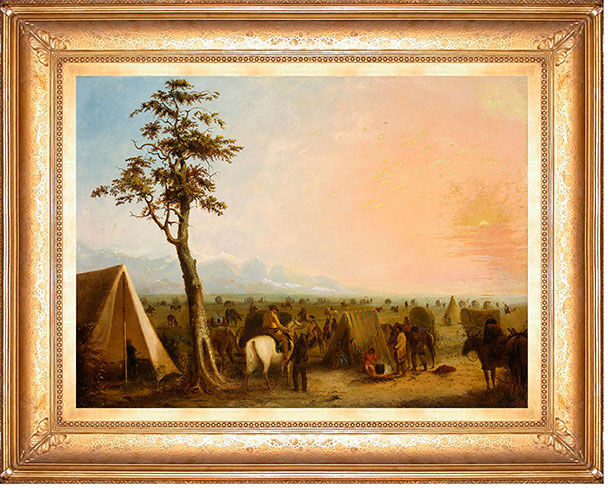 Alfred Jacob Miller’s “Our Camp” will glow in a new, custom frame crafted by Eli Wilner & Company of New York City, as shown in the company’s mock-up. 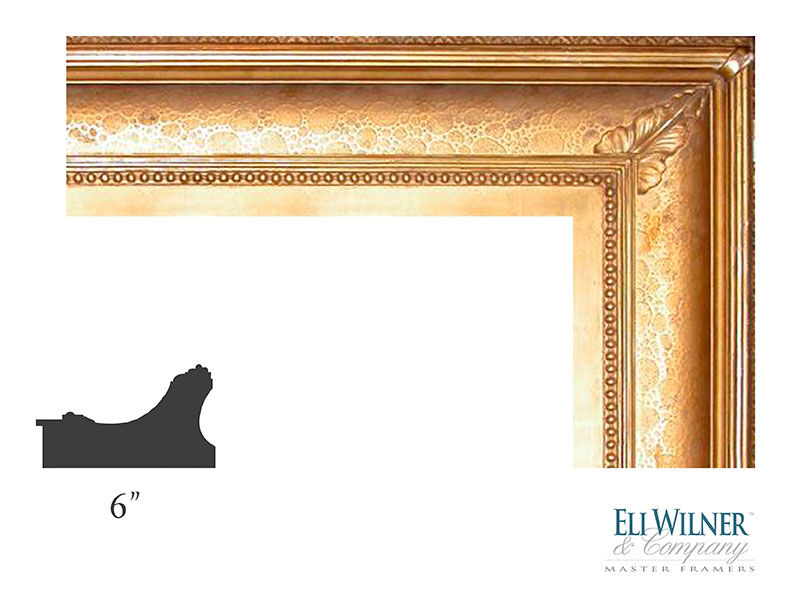 Carpenters used a profile gauge to get the precise measurements of the period frame being copied and create a detailed drawing of the substrate construction. 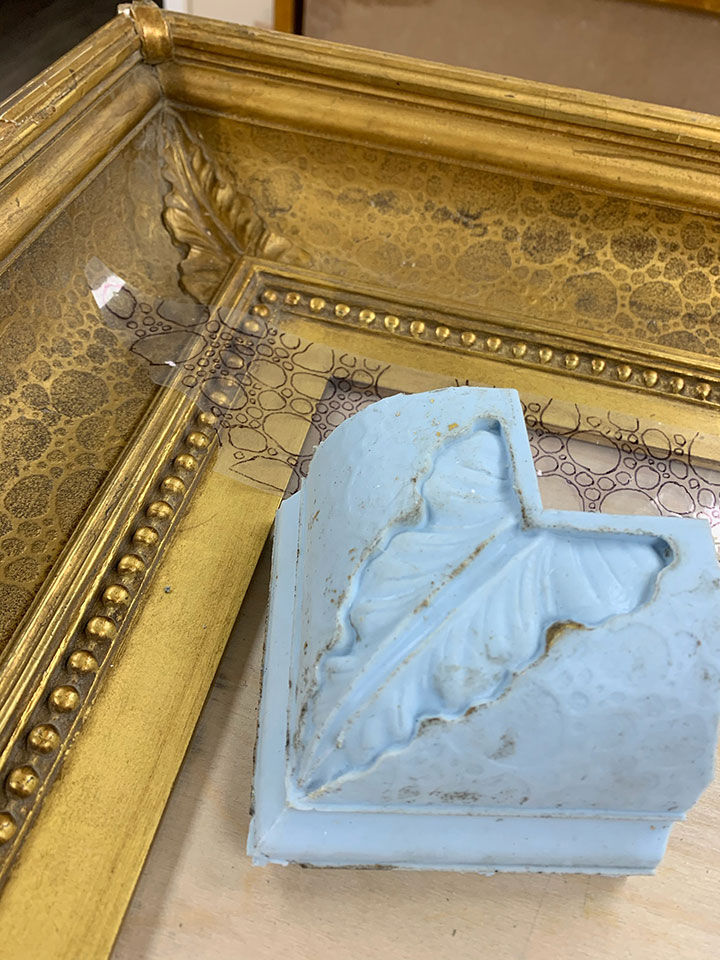 Artisans create a leaf mold for the corners and design a pattern for the cove in this detail of their construction on the new frame for Alfred Jacob Miller’s “Our Camp” in the Whitney Western Art Museum.

Alfred Jacob Miller’s “Our Camp” will glow in a new, custom frame crafted by Eli Wilner & Company of New York City, as shown in the company’s mock-up.

Carpenters used a profile gauge to get the precise measurements of the period frame being copied and create a detailed drawing of the substrate construction.

Artisans create a leaf mold for the corners and design a pattern for the cove in this detail of their construction on the new frame for Alfred Jacob Miller’s “Our Camp” in the Whitney Western Art Museum.

The chance encounter of a young artist and a Scottish adventurer resulted in a unique body of work that illustrates the American Fur Company Rendezvous, an annual gathering that took place that year, 1837, near the Wind River Mountains.

A seminal oil work from that trip, “Our Camp” by Alfred Jacob Miller, greets visitors to the Whitney Western Art Museum, initiating the gallery’s “narrative” of the West, explained curator Karen McWhorter. The piece will soon receive a significant upgrade with a custom, replica frame of the period, thanks to a generous grant she procured.

“The frame will elevate the painting,” McWhorter said. “The painting will look brighter in it. Frames can really enhance or detract from the paintings they bound.”

“Our Camp” features Miller’s patron, Capt. William Drummond Stewart, perched on his white horse in the foreground. He and his entourage await the arrival of the rendezvous’ participants – Native Americans, trappers, traders and suppliers. General activity occurs in the middle-distance, while the crags of the Wind Rivers form the backdrop.

“It’s significant in our collection, thrillingly important because Stewart is central in the composition,” McWhorter said. The piece, which she described as “spectacular,” offers regional relevance through the Wind Rivers, though they’re “depicted fantastically. The Winds are so incredibly craggy and awesome.”

What Miller observed and portrayed represents “a brief period in American history,” the fur trade, McWhorter continued. “He was the only artist to witness this uniquely American moment.”

Born in Baltimore in 1810, Miller traveled to Europe to study art in 1832 and returned to open a studio in his hometown in 1834. Two years later he relocated to New Orleans to escape the urban life. The next year, Stewart happened upon Miller’s studio and the next day invited the young artist to accompany him and document the hunting expedition.

They traveled in style, McWhorter noted.

The artist produced numerous drawings and paintings during the journey and returned to his studio where he transformed his field sketches into major pieces like “Our Camp.” Measuring 26” by 36”, it is “significant in scale, subject and rarity,” McWhorter said. “Most of his output was smaller watercolors.”

After a spell in New Orleans, Miller returned to Baltimore in 1838 to tackle Stewart’s commission for large works to adorn Murthly Castle outside Perth. Stewart’s older brother had died the year after the adventurer’s trip to the Winds, making him heir to the castle, the estate and the title of Sir.

Miller moved to Murthly in 1840 and spent two years there working on his paintings for the castle. Afterward the artist passed a short time in London and then returned to Baltimore where he spent the rest of his life, primarily recreating scenes from the 1837 trip.

In “Our Camp,” Stewart is talking to one of his hunters, his tent of blue and white vertical stripes located to his right. Nearby, his evening meal is being prepared.

“The tree on the left anchors the scene,” drawing the viewer’s eye to Stewart, McWhorter said. Miller “was pretty calculated in composing these pictures.”

The painting, completed c.1846-60, is one of five major Miller oils in the Buffalo Bill Center of the West, which houses a total of 33 Millers, the rest done in watercolor and pen-and-ink. “Our Camp” was donated by The Coe Foundation in 1970 and has a gilded frame that’s “nice, but not period-appropriate,” she noted.

“The mockup you sent truly enhances and elevates the painting,” McWhorter responded to a digital image sent by Eli Wilner & Co. of New York City. “I’ll look forward to discussing this further, as well as other Millers of ours in need of your expert eye, reverence for history, and impeccable taste.”

When McWhorter applied to the company for a grant to design a new frame for “Our Camp,” she received unanimous approval from an independent panel of jurors. Next, Center staff took exact measurements of the painting and sent them to Wilner. Its artisans based their mockup on a c.1850s frame commonly used for artist-explorer paintings. It’s gilded with applied ornamentation in the corners and features a special pattern in the cove, the concave portion of the frame.

“The organic rock-patterned cove sings with the foreground and complements the rocky geology,” McWhorter said.

The frame also boasts a leaf pattern as ornamentation in the mitered edges, for an entire effect that will enhance the glow Miller captured.

“The luminosity of the sky dominates the painting,” she said. “Alfred Jacob Miller did a great job of depicting light.”

Artisans will spend about seven weeks hand-crafting the frame.

“Framing is expensive,” said McWhorter, who declined to report the price tag except that it’ll run into five figures.

After the frame arrives in Cody, McWhorter employed local framer/artist Jeff Rudolph to place it around the canvas.

Aside from its aesthetic advantages, the new frame will add stability to the piece, she said. The project is timely as “Our Camp” will be included in a 2023 traveling exhibition celebrating the transatlantic patronage and relationship between Miller and Stewart, organized by the Center. The exhibit will also include the known paintings from Murthly, which were sold by the heir after Stewart’s death.

Recently, McWhorter had another Whitney Museum work, a Charles Marion Russell, reframed by a Jackson firm before it went on a traveling show. The curator hopes the Russell and Miller projects set a precedent.

“My goal is to reframe other Millers and other historical works in the Whitney,” McWhorter said. “The Whitney has such treasures of historical western American art, and many are deserving of better, period-appropriate frames.

“Thanks to grants like Wilner’s, we can hopefully tackle these reframing needs incrementally into the future.”

The University of Wyoming has a large collection of Miller's paintings - perhaps the largest assemblage in the world. They are on the top floor of Old Main (or at least they used to be there). Worth the trip down to see them. The value of a Miller painting is well over "five figures" - add three zeroes. And none on the market...