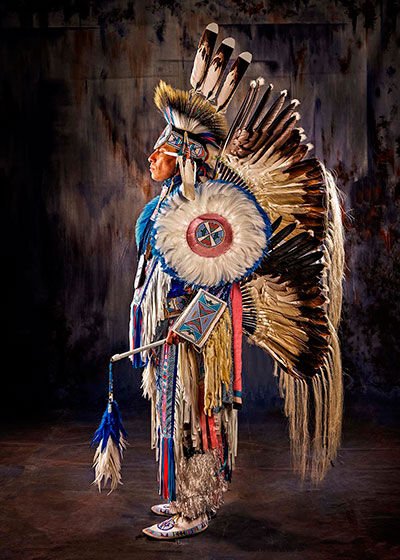 He performed recently with the Great Falls Symphony in Montana.

He performed recently with the Great Falls Symphony in Montana.

Fusing Native American and hip-hop culture, Supaman says he uses his art to teach, delivering a message of truth.

“He has a wonderful vibrant energy and a really strong voice,” center executive director Rebecca West said. “He’s approachable for people who think they don’t like rappers. He bridges that gap and is blending the traditional and the new.”

As a member of the “Apsaalooke Nation” Supaman makes his home on the Crow reservation in Montana. Supaman’s presentation combines Native culture, comedy and urban hip-hop culture. According to his bio, he spreads an empowering message of hope, pride and resilience.

“I would say what sets me apart from other artists is the way I incorporate Native culture into hip-hop culture,” he said in an interview with the Smithsonian Museum. “It’s not only an instrumental fusion, but also a visual balance of cultures.”

West said she first heard Supaman perform at a Native education conference a few years ago. Wanting to expand the Center’s interpretation of the arts, staff reached out to Supaman about six months ago.

“We wanted to try something different as far as our outreach audience,” she said. “He advocates strong forms of expression and is a voice for different tribal traditions.”

Supaman was the recipient of the 2017 MTV VMA award for “Best Fight Against the System.” He is also a Nammy “Native American Music Award” winner, “North American Indigenous Image Award winner and Tunney Award winner.

He was awarded The Aboriginal Peoples Choice Music Award in Canada for best video and was voted MTV’s new Artist of the Week.

His 2018 nominations brought him home awards for Best Hip Hop Album and Best Producer for the Indigenous Music Awards.

“The drum group that’s opening is a nod to some of these wonderful powwow traditions,” West said. “We wanted to incorporate a traditional element as well.”

Limited seating is available in the open grass arena. Personal lawn chairs and blankets are welcome. Coolers or backpacks won’t be allowed.

To purchase tickets go to centerofthewest.org/supaman-concert/.

Where: Robbie Powwow Gardens at Buffalo Bill Center of the West