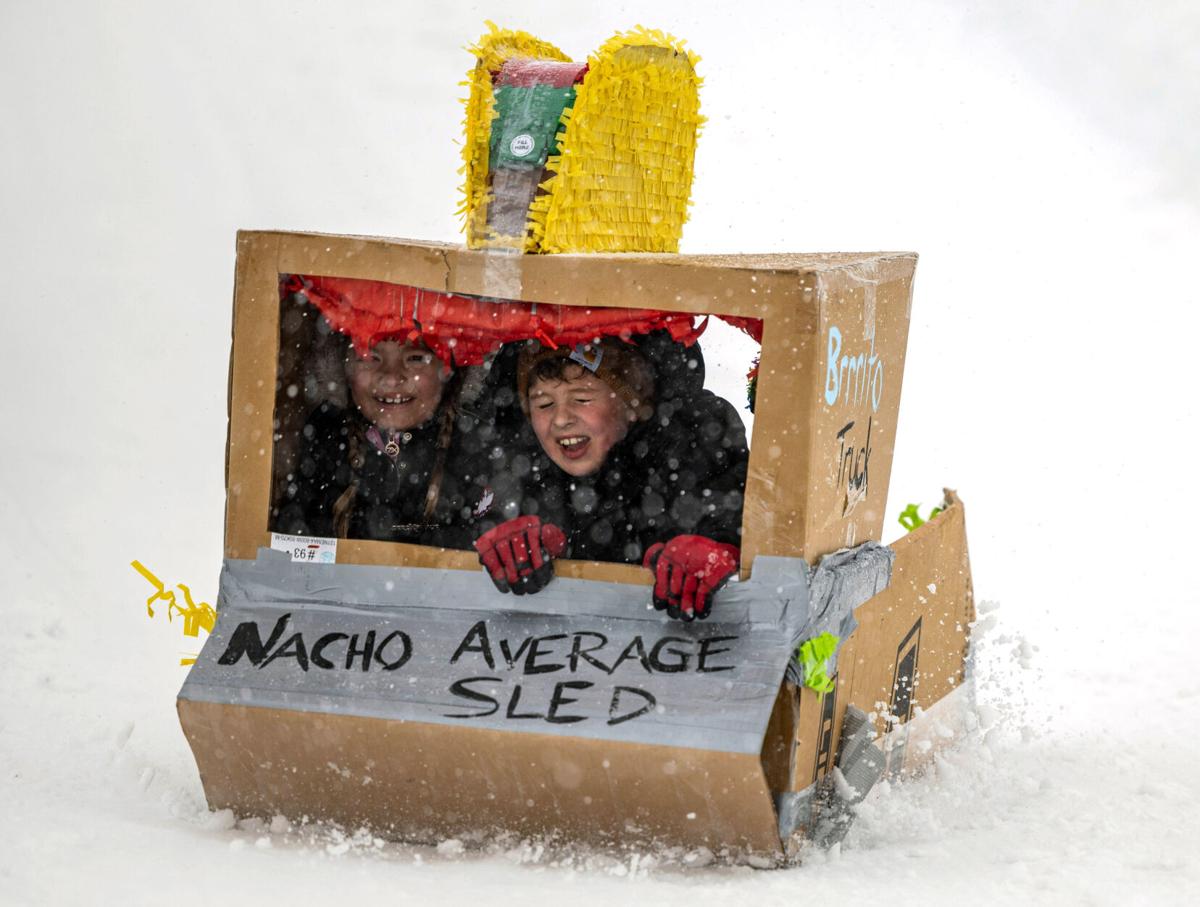 Paisley DeFord (left), Troy Hoover and Parker DeFord (out of view) ride their sled during the Sleeping Giant cardboard race on March 20. 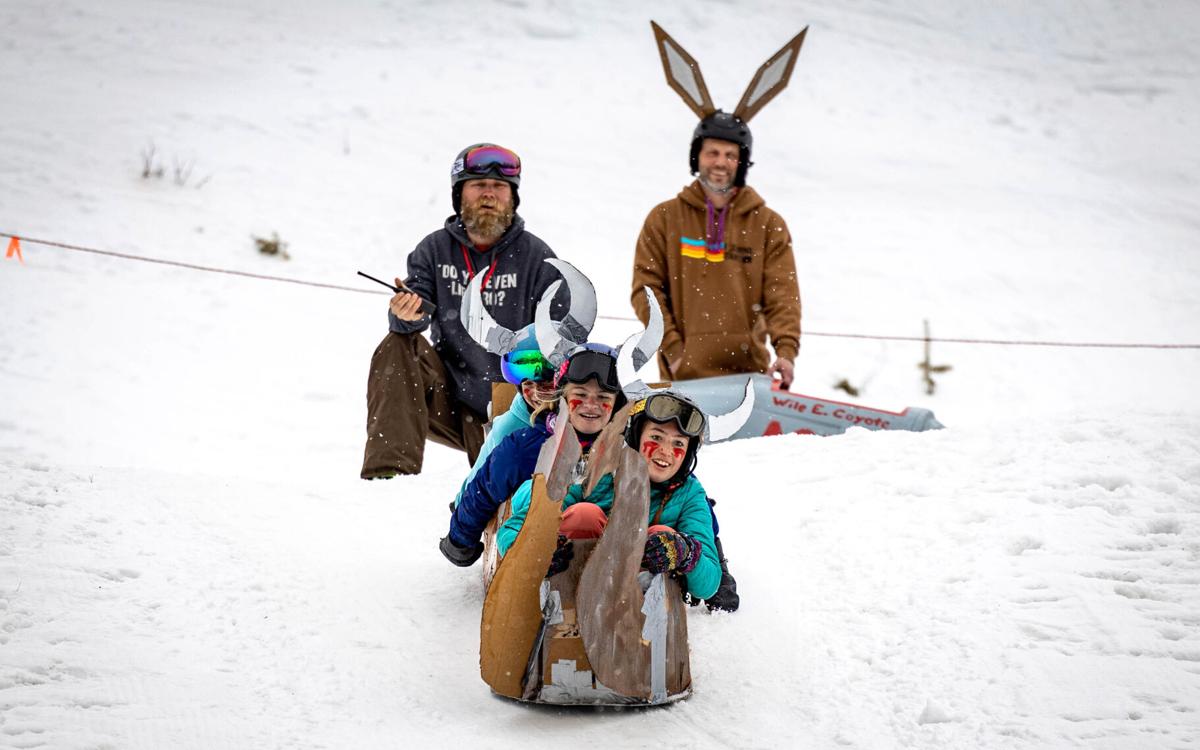 Sunday Schuh (front to back), Molly Buckles and Charlotte Conaway ride their viking boat as Will DeFord (left) and Cy Morris watch in the background. 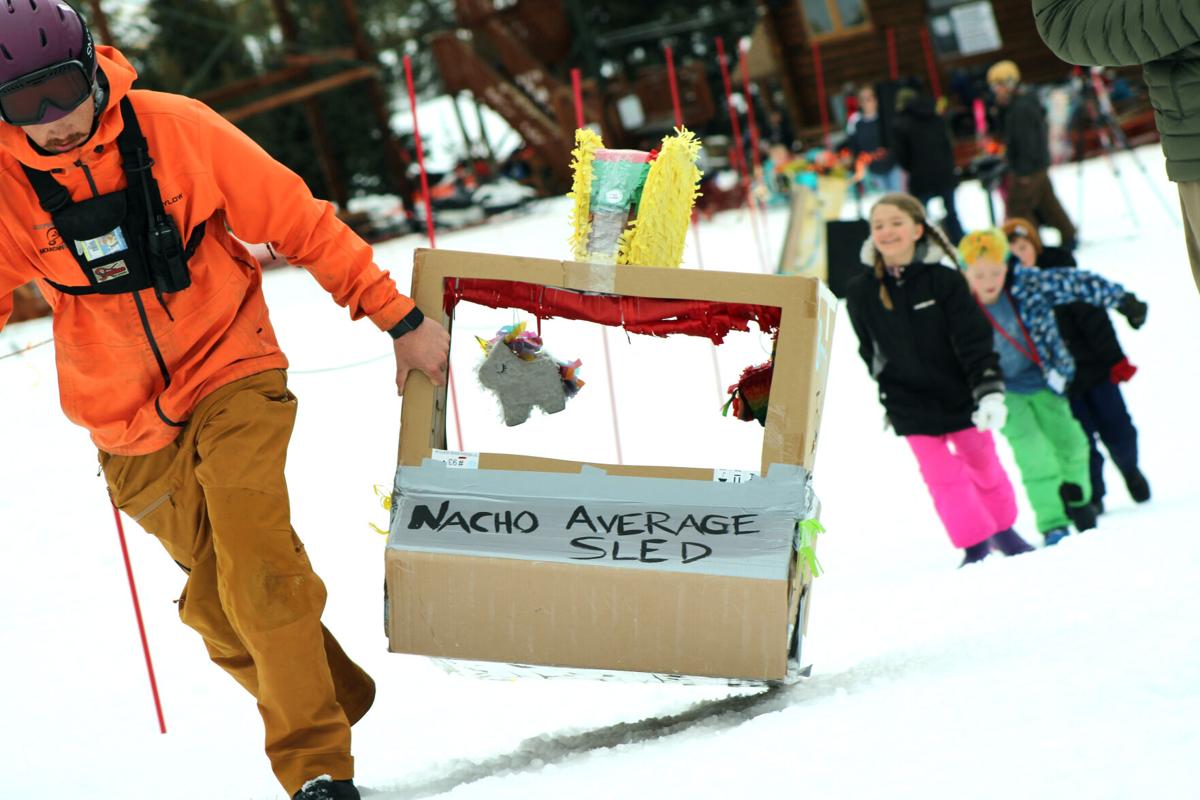 Hunter Boazman hauls “Nacho Average Sled” up the hill for the race.

Paisley DeFord (left), Troy Hoover and Parker DeFord (out of view) ride their sled during the Sleeping Giant cardboard race on March 20.

Sunday Schuh (front to back), Molly Buckles and Charlotte Conaway ride their viking boat as Will DeFord (left) and Cy Morris watch in the background.

Hunter Boazman hauls “Nacho Average Sled” up the hill for the race.

No match may be more unbalanced than that of snow and cardboard. When the two meet, snow usually bullies cardboard and cardboard predictably retreats into a tattered, sopping mess.

But bring duct tape into the fold, and that cardboard stands a fighting chance, protected by the tape, which also serves as a lower resistance surface for sliding.

A little cardboard, duct tape, and creativity – those were the only ingredients necessary to be a successful competitor at the Sleeping Giant Ski Area cardboard race on March 20.

One of the top teams was powered by those ingredients and pure liquid gold.

“Nacho Average Sled,” despite a questionable lack of tortilla chips, managed to take second in the race. Attention to detail was key throughout the sled, with a piñata even decorating the hood.

“We were in the party aisle looking for decorations and saw this taco piñata and this amazing image,” Paisley DeFord said. “And as it says, it’s nacho average sled.”

Paisley and Parker DeFord and Troy Hoover piled in the taco-topped sled. The jury is still out on whether this was for aerodynamics or mere posturing.

The fastest team in the cardboard race was also the one that spent some of the least time designing their sled. Seth Siebert, Trey Davis, and Jarom Beardall’s “Jamaican Bobsled” was merely a flat piece of cardboard with an upright piece used as a steering wheel. The secret to their success: no sharp edges or sharp corners that could dig into the snow. By taping off all surface-touching edges, the sled was able to engage the lowest possible friction with the snow.

Davis said the Jamaican Bobsled team already plans to defend its title next year. None of the boys on the team knew about the race before arriving at the mountain that morning, and in a half hour their sled was created.

After a steep drop-in, the course leveled into a consistent pitch for the last 100 or so feet.

“It was kind of scary, cold too,” Gracie Wells said.

Many sleds could not make it through this moderately-pitched wasteland, skidding to a stop long before the finish line. Those caught in the abyss were allowed to get out of their sled and run it through the checkered flag.

Takota Heath took a hard, face-first fall only precious feet away from the finish line when his phone popped out of his pocket.

Heath got right up though, not willing to let a face full of snow slow his team down. They had spent a whole half hour working on their “Drip Mobile” sled after all.

“Takota helped us get over the finish line,” Josh Sauers said.

The Warner Bros animated character Wile E. Coyote was well-known for making a number of appearances showcasing a variety of the unreliable Acme products he had the misfortune of buying. In one of the most memorable instances, Wile E. collides into a mesa while in pursuit of the Road Runner, when the bird takes a sharp turn Wile E.’s rocket can’t match.

In a way, this was the same fate that befell Sleeping Giant employee Cy Morris, but instead of a bird, his Wile E. Coyote Acme Rocket couldn’t fight gravity.

“I wish it hadn’t turned and flipped,” he said.

Even though his sled won best design, he held no sentimentality about the device after it served its purpose, and let some children demolish it with some of his own assistance shortly after the race.

“We’re going to burn it tonight,” he said with a chuckle.

The race also featured a Norse-inspired trio powered by three young vikings- Charlotte Conaway, Sunday Schuh, Molly Buckles. When their sled came to a halt about halfway through, the Scandinavians had to get out to make their plunder on foot.

“It’s okay because we had fun,” Conaway said.

When the cardboard race took place, it had been almost exactly a year since the COVID-19 pandemic shut down ski areas across the country, including Sleeping Giant. General Manager Mike Gimmeson said the idea to have the race came simply as, “a classic thing ski areas do.”

Steamboat Ski Area in Colorado has been holding cardboard races for nearly 40 years.

Sleeping Giant, under new management this year, is looking to shape its own destiny in a similar, outside the box manner. About 25 competitors decided to help out.

“I thought it was really cool,” Gimmeson said. “Some people spent a lot of time on it.”