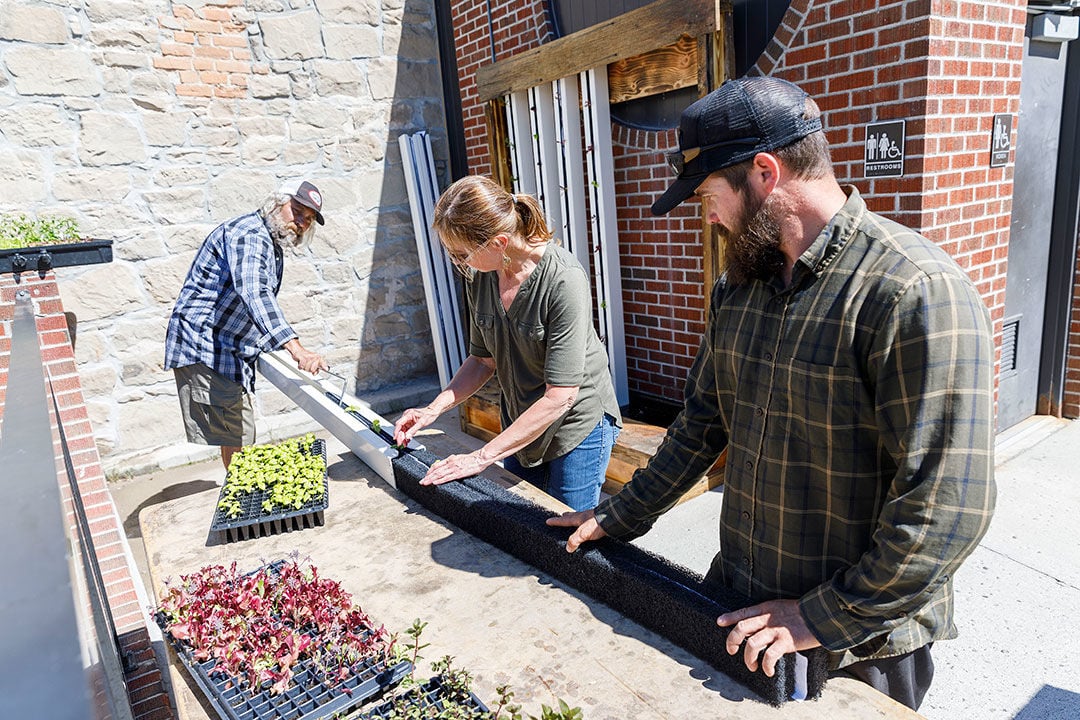 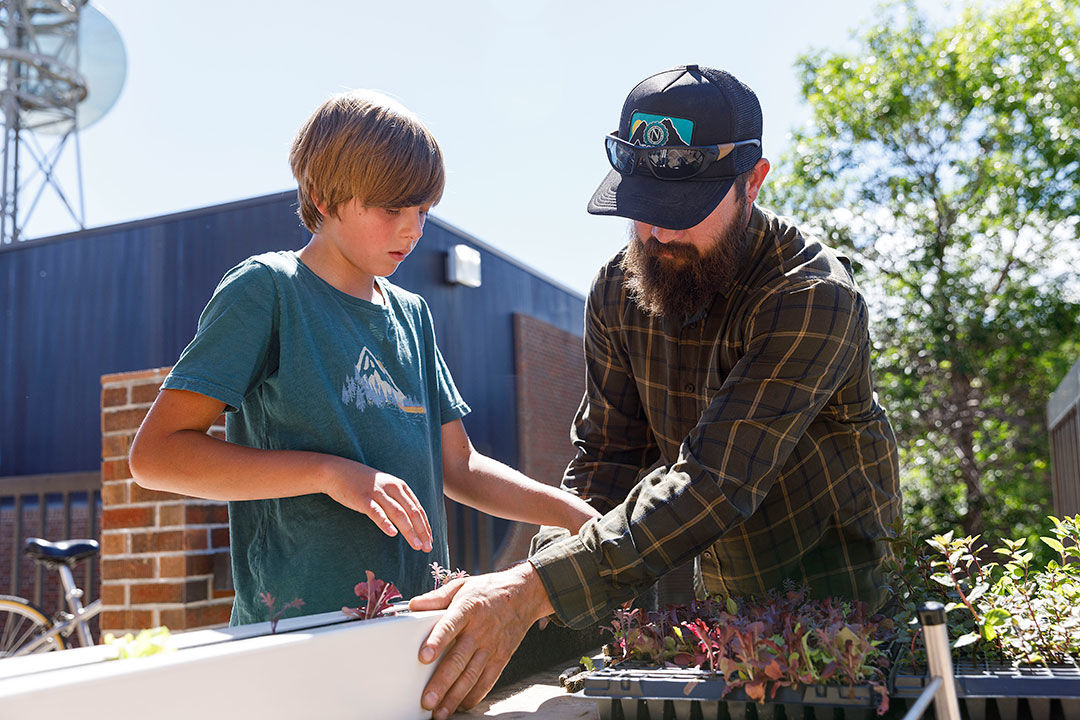 Anders Nelson, 12, (left) and Travis Hines with Bio-Logic Designs work on the garden. “It will be fun to look at and fun to eat,” Nelson said. 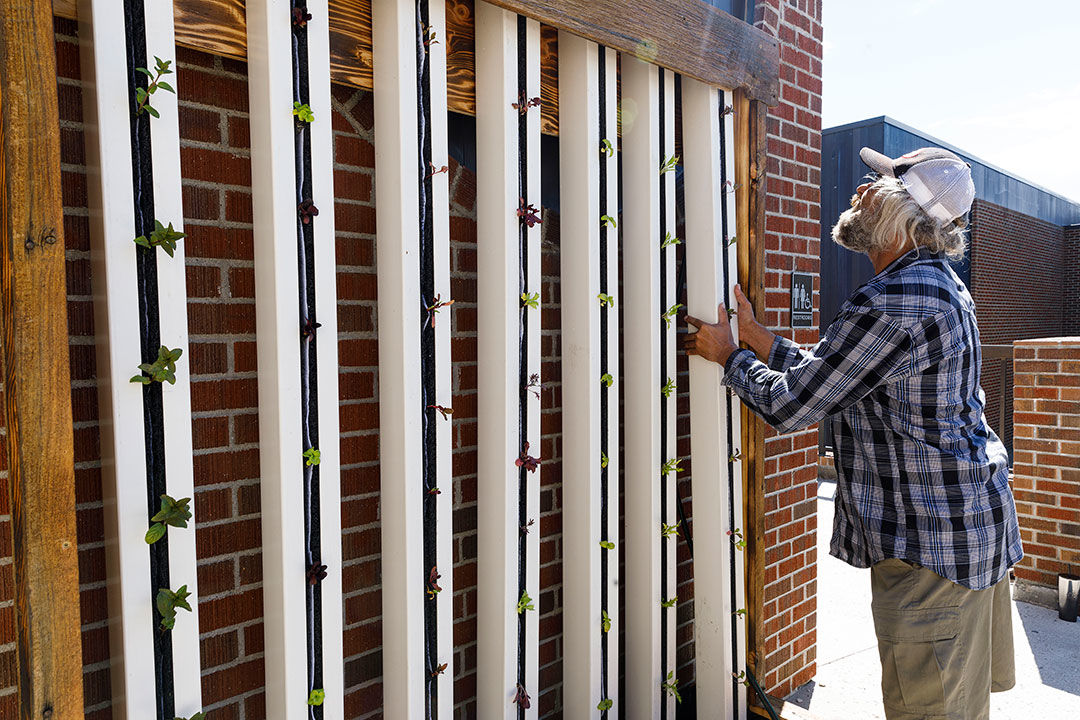 J.D. Rush installs a piece of the vertical garden at Bell Plaza on Sheridan in downtown Cody.

Anders Nelson, 12, (left) and Travis Hines with Bio-Logic Designs work on the garden. “It will be fun to look at and fun to eat,” Nelson said.

J.D. Rush installs a piece of the vertical garden at Bell Plaza on Sheridan in downtown Cody.

There’s a new kind of garden in downtown Cody.

A vertical plant garden was recently installed and is already growing its first crop of mint, kale, basil and lettuce at its location in Bell Plaza next to Legend’s Bookstore.

The garden is chained off to reduce contamination and discourage vandalism and deer, but is free to view and interact with.

The garden was built and installed June 23 by Travis Hines, owner of Bio-Logic Designs. The organization helped support the grant and is building vertical gardens for several other Wyoming towns.

The cost to the City of Cody for the two-year lease is $600.

“We’re hoping after those two years that people will love it and they will really want to keep it,” Butler said.

It’s a hydroponic garden because it recyces water through a reservoir that collects the vertical garden’s excess water from a drip system.

When Hines returns for maintenance he plans to add lily pads and other water plants, and possibly some goldfish.

Those additions will turn it into an aquaponic garden, a system that allows for greater water conservation.

The presence of plants and fish would allow waste material to turn into nutrients for the upper plants, and the excess water would be purified when returned to the reservoir.

Having water and ecological cycles on view was one of the biggest reasons Baker said there was support for the vertical garden, as it not only provides a beautiful addition to the city, but can make for interesting education for elementary students and summer camp children.

The original location for the garden was the Cody Rec Center.

“Really, I’m glad we chose the Bell Plaza, because I think it is a lot closer to everyone and everything,” Butler said. “But the whole original idea of why we wanted the rec center is because we wanted kids at the summer camp to tend to it and learn about it as one of their activities.”

One youth is already involved. Anders Nelson, 12, was helping Butler with her lawn when he  asked if she needed help with anything else. Butler asked him to ride down Sheridan Avenue every day this summer to check on the garden.

Other plans for greater community involvement include gaining interest in leasing two more vertical gardens and letting schools tend to them in the fall and winter as a way to keep the garden’s educational value going.

“We would really like the grade schools to take them during the autumn and winter when the plants start dying,” Butler said. “We haven’t spoken to any principals yet, but that is something we hope to get considered.”

Butler also said there are no concrete plans for what to do with the produce from the vertical garden.

Since it is supposed to be a community garden, people are encouraged to harvest some of the fresh produce; however, they are discouraged from taking everything.

Any produce that goes unclaimed may be considered for donations.

“We would like to send them to nonprofit groups, of course, but since it is a public garden we also want people to feel free to take some,” Butler said. “We just don’t want someone taking everything for themselves.”

I like this, people standing near each other need to wear a face mask though.