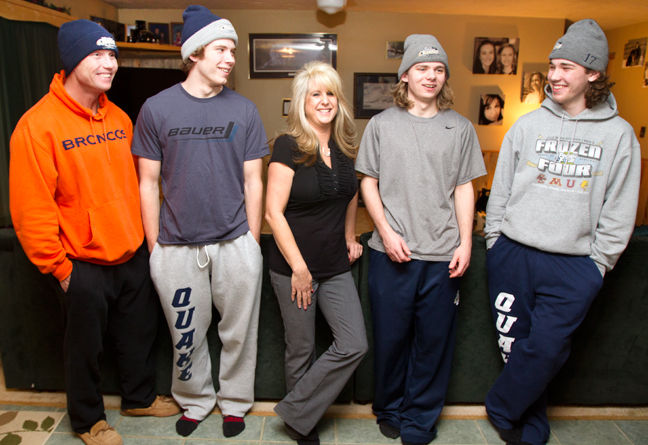 Yellowstone Quake hockey players, including forwards Max Doner (second from left) along with John Scherer (second from right) and Brandon Blaszczyk (right), hang out with their billet parents Steve and Shannon Wood after dinner recently at the Wood home on the South Fork. 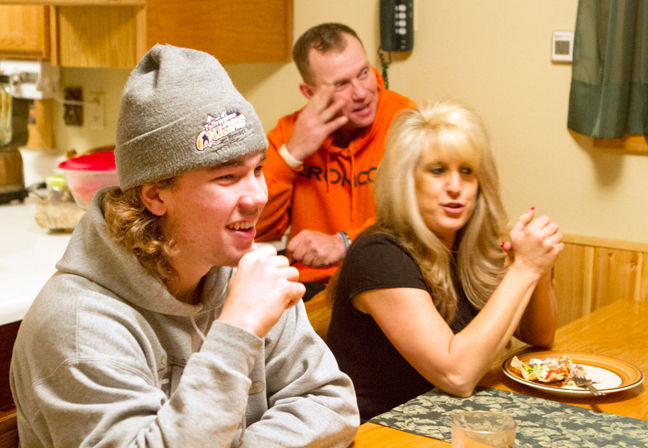 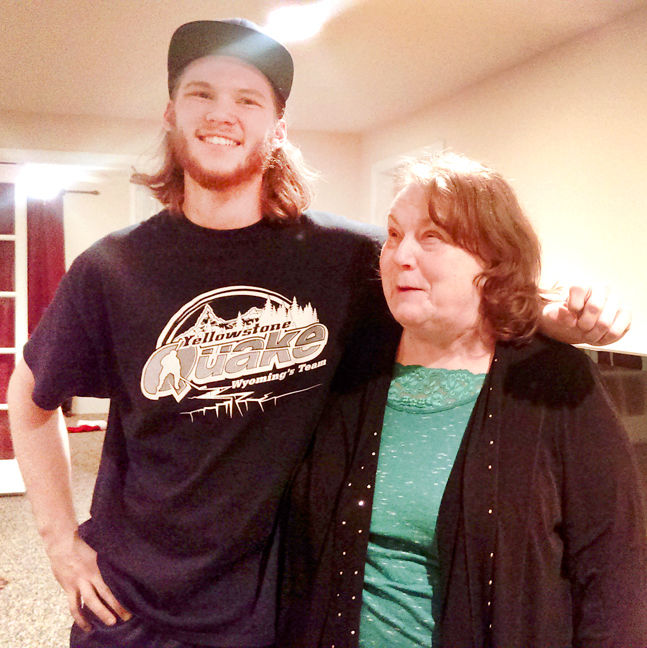 Quake captain Ross Mullen shares a laugh with his billet parent Dian Kurtz recently at the Kurtz home in Cody. 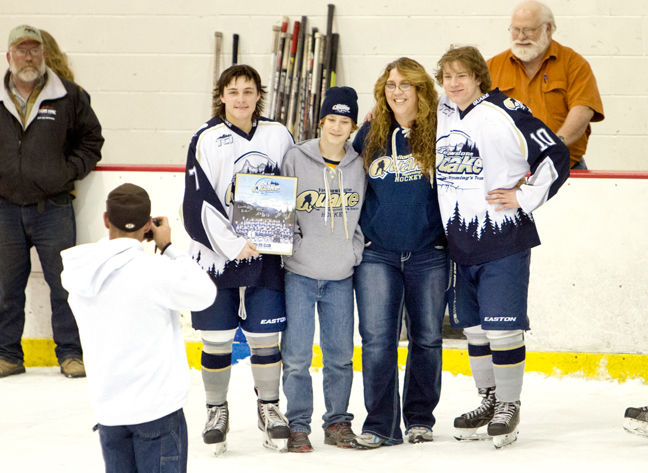 Quake hockey players Taylor Garner (left) and Mason Jobe (right) have their picture taken with their billet family, including Kerry Gunther and son Eli after billet families were recognized during a recent game against Great Falls at the Riley Arena. Another “Hockey dad,” Bob Kurtz, is in the background.

Yellowstone Quake hockey players, including forwards Max Doner (second from left) along with John Scherer (second from right) and Brandon Blaszczyk (right), hang out with their billet parents Steve and Shannon Wood after dinner recently at the Wood home on the South Fork.

Quake captain Ross Mullen shares a laugh with his billet parent Dian Kurtz recently at the Kurtz home in Cody.

Quake hockey players Taylor Garner (left) and Mason Jobe (right) have their picture taken with their billet family, including Kerry Gunther and son Eli after billet families were recognized during a recent game against Great Falls at the Riley Arena. Another “Hockey dad,” Bob Kurtz, is in the background.

There were tears at the dinner table when Josh Neumann was traded to Billings in early February.

It was almost as if one of Kerry Gunther’s children was being kidnapped.

“He was traded on my birthday,” Gunther said. “He said, ‘Sorry, not a good birthday present.’ It was an emotional time.”

The outgoing Yellowstone Quake captain was sent away by the junior hockey team, but not by his surrogate mom.

The Quake, members of North American Tier III, is a different kind of Cody sports operation. The players are not local high school kids. They are not itinerant rodeo competitors. And while they may be the same age, 16-20, their situation is unlike that of Northwest College athletes.

The roster of these amateur players is made up almost exclusively of young men from far away places such as Norway, Canada, North Dakota, Minnesota, Washington and Illinois.

Most Quake players are adopted by local families under a billeting program. The word billet has long been applied to the housing of soldiers in civilian homes. Call this version of billeting foster care for hockey players.

“We want a family situation for the boys,” Quake president Bob Bole said.

Not a free ride

Surrogate parents, the local families who welcome strangers into their homes each season from August to March, fill the absent genetic family’s role in the “Quake Family.”

Presumably, the warmth of the relationships help make up this year for the discouragement of a 9-30-4 season.

Chris Hatfield, the billet coordinator for four years, who is handing the reins to Gunther for next season, said her job is like running match.com.

The Quake perform background checks on families, and Hatfield interviews players by phone before they come to Cody. She is the go-between for the young men and hosts.

This is not a free ride. A player must contribute $300 per month for his upkeep, follow family rules and adhere to curfews set by the team and family (usually 11 p.m. weeknights).

In exchange, families supply sleeping quarters, access to bathroom, laundry and kitchen facilities and three meals a day. Players may be asked to shovel snow, take out the garbage or do dishes.

High school graduates obtain jobs on the side that don’t interfere with early morning practices and a schedule of 47 games. Younger players enroll at Cody High School.

Max Doner, 18, of Mukilteo, Wash., a senior, is a new boy in school. He wears Quake garb and that breaks the ice with other students.

In free time, players mostly hang at host families’ homes or with other players.

They play Xbox, watch movies or partake in scheduled team activities. There is not much time to roam.

Hatfield became a “hockey mom” after hearing a public address announcement at the Riley Arena seeking volunteers. She has housed as many as four players at once.

Hatfield’s daughters Rachel, 22, and Becca, 20, are hockey fans and it was like bringing grown brothers into their home.

When Becca got married, one ex-Quake house mate was an usher. In March, another former player, now attending college in South Dakota, is due to visit the Hatfields.

Forming these types of bonds is far from unusual.

“I get invited to weddings and so do the billet families,” Bole said.

Dian Kurtz and husband Bob have hosted players for six years. While macaroni and cheese and spaghetti may be menu staples, she does her research.

“I want to know about allergies,” Kurtz said. “I had a player who was kosher, one who was gluten intolerant, and one with Type I diabetes, who was insulin-dependent.”

On the wall adjacent over the steps to Kurtz’s basement a sign reads “Man Cave.” It’s here where players reside.

The area includes a wall of fame featuring autographed team pictures from past years, ticket stubs and other memorabilia. A Quake banner is displayed in another room and a Quake Christmas jersey, No. 14, spreads its wings on still another wall.

Players stay in touch with Kurtz. They send photos of their college hockey teams, update Kurtz on their lives and return for visits.

“We see them grow up,” Kurtz said.

Ross Mullen, of Wenatchee, Wash., and Sawyer Scanlan, of St. Paul, Minn, spent these last two seasons with Kurtz – until Scanlan (in addition to Neumann) was swapped to Billings.

“It was traumatic,” Kurtz said.

Mullen, the new captain, and Kurtz shared a hug as they gazed at the Wall of Fame.

“You know, you need to put a picture of me right in the middle,” he said.

Kurtz can banter with the boys.

“How many hockey players does it take to change a light bulb?” she asks. “One to change it and four to tell him how to do it.”

Mullen’s two families have connected and the Mullens have visited Cody several times.

Mullen is aging out of junior hockey, turning 21 in August, and serious hockey. He wants to become a chiropractor and faces seven years of school.

“This may be my last go-around,” Mullen said.

The refrigerator art at Steve and Shannon Woods’ South Fork home is not made up of elementary school squiggles, but hockey photos.

Doner, John Scherer, 19, from North Bend, Wash., and Brandon Blaszczyk, 18, from Homewood, Ill., chowed down on Taco Tuesday, though it had been moved to Wednesday. All three wore Quake knit hats at the dinner table.

This is the Woods’ first year as a host family. Steve, who works at CenturyLink, is the cook. Shannon told players she wouldn’t answer if they called her Mrs. Wood. She suggested Shannon or Mama Shannon. They have occasionally improvised with “Shanaroni.”

They all love Oreos and milk. The players slurp through a gallon of milk every two days. They devour two, 28-ounce giant-sized boxes of chocolate and peanut butter Reese’s Puffs – $4.99 at Walmart – weekly.

“That’s their breakfast of champions,” Steve Wood said. “I should have invested in General Mills stock.”

A spirited discussion of the best hockey movies ensued. “Miracle on Ice,” the story of the 1980 U.S. Olympic champs came up.

“That’s my favorite movie,” Doner said. Steve spoke up for “Mystery, Alaska”and others were mentioned.

But “Slap Shot,” highlighting the goon-like habits of the fighting Hanson brothers, is still the king of hockey flicks.

Blaszczyk pointed to Scherer and said, “He’s a Hanson.”

“Because I get penalties,” Scherer said.

The Woods have a pool table and a hot tub and Steve has tossed a football on the lawn with the guys.

“I’m the best,” Scherer said, claiming to be house champion at pool.

Uh, uh,” said Blaszczyk “Definitely me. I win 66 percent of the time.”

But not with Bryanna, the Woods’ 19-year-old daughter, a hockey player who attends school in Billings and returns for weekends.

Between them the players have numerous sisters and Shannon Wood said they know how to treat a girl as a sister.

Protective enough for Scherer to provide Bryanna with fighting lessons to defend herself on the ice.

The players do get homesick. They text relatives, talk on the phone and their families can watch Quake games live on the Internet. Those who can, come to watch games in person.

They loaned their children out to strangers for a hockey season, and most players were wide-eyed when they reached Wyoming on their own.

“They always treat you like you’re part of the family,” Scherer said of the Woods. “It’s kind of like becoming an adult. I feel more mature. Well, I don’t know about adult.”

“I was hesitant because it was really far from home,” he said. “I love it now. They treat me like their own kid.”

Blaszczyk wants to come back, but said his parents don’t want him to because of the distance.

Maybe if he pledges not to eat Reese’s Puffs for breakfast they’ll let him.

Gunther, a widow, and her son Eli, 13, like having the players around. She plans to house at least three Quake skaters next season while running the billet show.

She has become close with boarder Mason Jobe’s parents and plans a summer vacation to Nashville to see them.

The link between players and families, Gunther said, “is about so much more than hockey.”

Last Friday night at the Quake-Great Falls game, Gunther put out a sign-up sheet on a table seeking out new families.

“Be a Quake Host Family for the 2015-16 Season” her notice read. Besides being paid the $300 monthly fee with free season tickets, the deal offers the “opportunity to forge a lasting relationship with a player.”

It was also “Quake Family Night.” The event resembled a senior night at a high school game.

Between the first and second periods, host families tiptoed onto the ice. They were presented with framed, autographed team pictures as thank-yous from their surrogate sons who skated over and posed for photos.

Judging from the hugs and smiles shared the night was about much more than hockey.