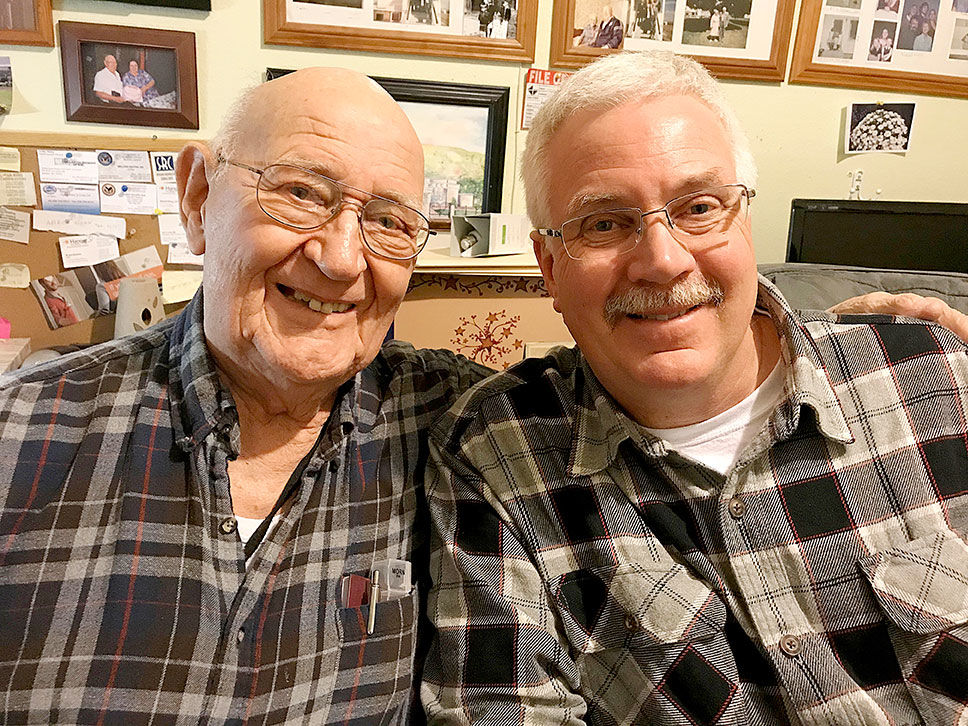 Roy Irvin Hostetler (left) with his son David Etchells. The two didn’t know each other existed until they took DNA tests. 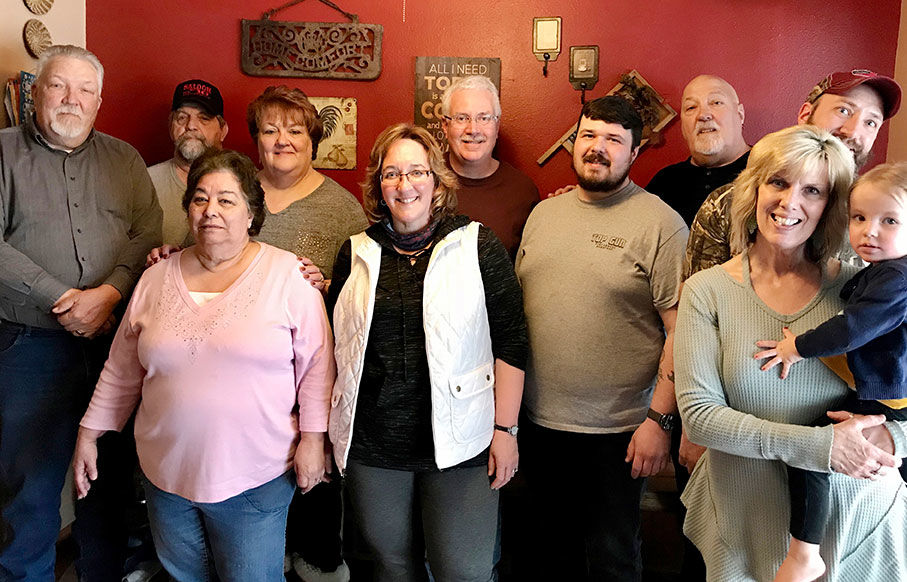 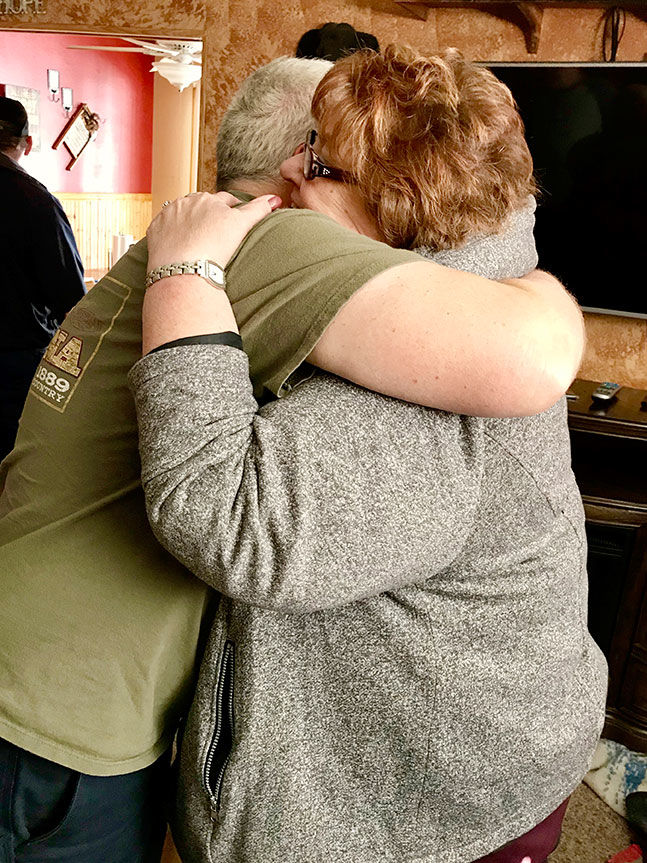 David Etchells hugs his half-sister Deb Zierke of Cody during a meeting in Billings. (Courtesy photos)

Roy Irvin Hostetler (left) with his son David Etchells. The two didn’t know each other existed until they took DNA tests.

David Etchells hugs his half-sister Deb Zierke of Cody during a meeting in Billings. (Courtesy photos)

One line on an Ancestry.com listing recently changed the lives of a family in the Cody and Billings area.

When Cody nail technician Deb Zierke’s elderly father called from Coeur D’ Alene, Idaho, to tell her she had a 54-year-old brother she was floored.

Her father, Roy Irvin Hostetler, had learned he had another son only the day before.

For Roy and his children, receiving the call in February began a new chapter in their lives.

For David Etchells, it was the conclusion of a search more than three years in the making.

“It’s been a wonderful journey,” he said. “Now I’ve got more family all around.”

David lives in Connecticut and said while he knew he was adopted, he loved his parents who raised him and didn’t want to know about his biological family.

It wasn’t until Aug. 4, 2015, at the urging of his wife Karen, that David finally reached out to the department of family and child services for his adoption records, which he was able to receive because his birth mother had passed away. His biological mother, Geraldine, had died in the 1990s.

He learned more about her and her husband, who was incarcerated often but had given his last name of Glenn to David, initially called Timothy Glenn.

His birth mother had planned on having him adopted due to her fear of her husband, according to adoption documents.

What the document didn’t have much information on was his birth father, a man who was divorced and had served in the military, but was now a planner.

While her husband was in prison, Roy briefly moved in with David’s birth mother and the two planned to get married. Then complications led to Roy leaving and eventually getting married to another woman, having never known he had a son on the way.

David said for a while after that he thought he had learned all he could, as those revelations about his birth mother had enabled him to contact biological family on that side.

He was one of 10 children on his mother’s side and eventually, at a pizza restaurant in Norwich, Conn., met up with two of his biological brothers.

As his bond grew with his new half siblings (he had grown up with just one brother with his adopted parents), he at one point questioned whether he really had a different father.

“Originally I thought it was a made-up story,” David said.

It took an Ancestry DNA test to prove it, and also determine his biological father.

Karen had taken a test in early 2017 and, by the end of the year, had convinced David to take one along with two of his half siblings.

“I was more curious to find out if they shared a common father,” Karen said. “Never in a million years did I think we would find David’s actual biological father.”

As luck or destiny would have it, Deb said her father and his wife Dolly had just taken DNA tests after prompting from their local church.

It took a while, but on Feb. 17 David finally received the results of the DNA test. He and his wife stared at the screen together to see a few simple, life-changing lines:

“I didn’t recognize the name at all,” David said.

His wife, trained as a journalist, went to work right away. David paid a few dollars online to get a phone number once they located his father in Idaho and then he called.

When David called Roy for the first time he just asked questions about his biological mother and the series of events that led to David being put up for adoption. Roy was curious as to why David was asking.

“I told him I was his son,” David recalled.

After that call, Roy in turn called his four children from his first wife. Two of them live in Billings, one in Powell and one in Cody – Deb.

She was beside herself.

“It’s such an amazing story,” she said. “It feels like it could be a movie.”

After making the connection, David said he planned to make the trip to see his father, now in his mid-80s with health issues, before it was too late to make a connection.

So he and his wife planned a trip in early March to see three of his new half siblings in Billings and his father in Idaho. Weather made the trip a challenge, but they made it.

“It turned out to be quite the adventure to get there,” he said. “But it was great. I really enjoyed the whole trip, meeting everybody.”

For Deb, it was a life-changing moment. Just like that, the family had gotten bigger.

When David met with Roy, his father told him about his life, his marriages and his jobs that brought him from Pennsylvania to the West.

David said he was surprised at all of the things he and his new brothers had in common, from mannerisms to the way they talked.

They compared lives – Deb and her other brothers had a tough time after the divorce until their mother remarried seven years later and life began to settle down.

In that respect David’s life was calmer, once he was adopted he had a typical childhood, he said. During their visit he gave each of his new siblings a book of pictures detailing his life in Connecticut.

David and his wife also visited his son Nathan Etchells, who lives in Bozeman and came to Billings to meet everyone.

Deb said it was a wonderful revelation for him as well.

“He said, ‘Now I have family nearby,’” she recalled.

Nathan was ecstatic, talking with everyone and planning times to make it down to Billings. He is currently a bus driver in the state, as is his newfound uncle R.D. Hostetler.

Karen and David have already talked about future get-togethers with their new family.

“We hope to vacation together at some point, possibly a camping trip,” she said. “We are also hopeful that Deb and other family members will plan a trip to spend some time with us here in Connecticut.

“The strange thing is, this wasn’t like just meeting new friends – from the beginning, these people have felt just like family. There’s a connection deeper than words can describe.”

For David, the meeting with siblings and then his father closed the door on one chapter of his life and opened the door to new family. He said at his age, he’s ready to forgive the past and embrace his newfound siblings and father.

He credited his wife for getting him started down the path.

“My wife’s got an attitude like Deb, to reach out and not be scared of the past,” David said. “Life is too short, so let’s get to know everybody, not be judgemental, and so I got to hear stories of my dad. If he hadn’t done what he did, I wouldn’t be here.

“I had really great parents growing up ... Now I’ve basically got two dads.”

Deb, for one, is so thrilled she’s going to do a DNA test herself.

“This is a big deal, a huge turning point in our lives,” she said. “We have an added brother.”