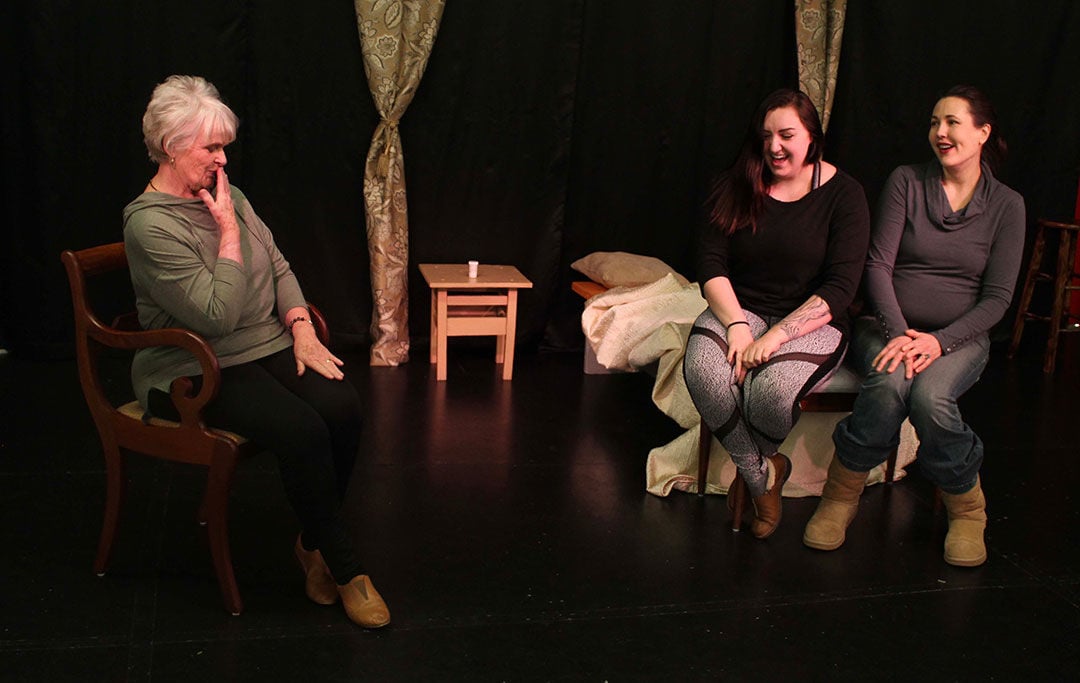 “Three Tall Women” takes place in the bedroom of a sick and forgetful old woman known only as “A” (played by Nan Koehler). In the first act she is cared for by a middle-aged caretaker “B” (Meghan Nunn) and visited by a young woman “C” (Drew Murray) sent by the lawyer to settle some financial affairs.

The old woman is difficult and seems to enjoy upsetting the young lawyer. While the caretaker is used to the antics of her ward, the young woman is impatient and quick to judgement of “A’s” language and lifestyle. During their discussion of “A’s” life, the three reflect on love, family, sex, pain and the body’s inevitable decline. During the second act, the women begin discussing events in their mutual life and how one matured into the other. We discover that they are, in fact, all the same woman, “everywoman,” at different stages of her life.

The play is directed by Bethany Hamilton Sandvik, who first saw the play in 2003 when she was working in the theatre in Cleveland. It resonated with her even then and she has been hoping to direct it ever since.

“I tried to get the rights to direct this play two years ago, but because it was being revived on Broadway, I was unable to do so,” Sandvik said.

The 2018 revival garnered Tony awards for both Glenda Jackson (A) and Laurie Metcalf (B).

In conjunction with this production, a talk-back will be presented following Saturday’s performance in which social workers Neisha Potter and Kyle Watson will discuss aging, memory care and other elder care topics inspired by the play. The talk-back is free with admission.

Tickets may be purchased online at studiotheatreccpa.org or by calling CCPA at (307) 527-7398.

Studio Theatre at CCPA is the only professional, black-box theatre in the Big Horn Basin. Studio Theatre strives to create and present work that highlights significant historical and social issues, empowers women and fosters creativity in all ages.