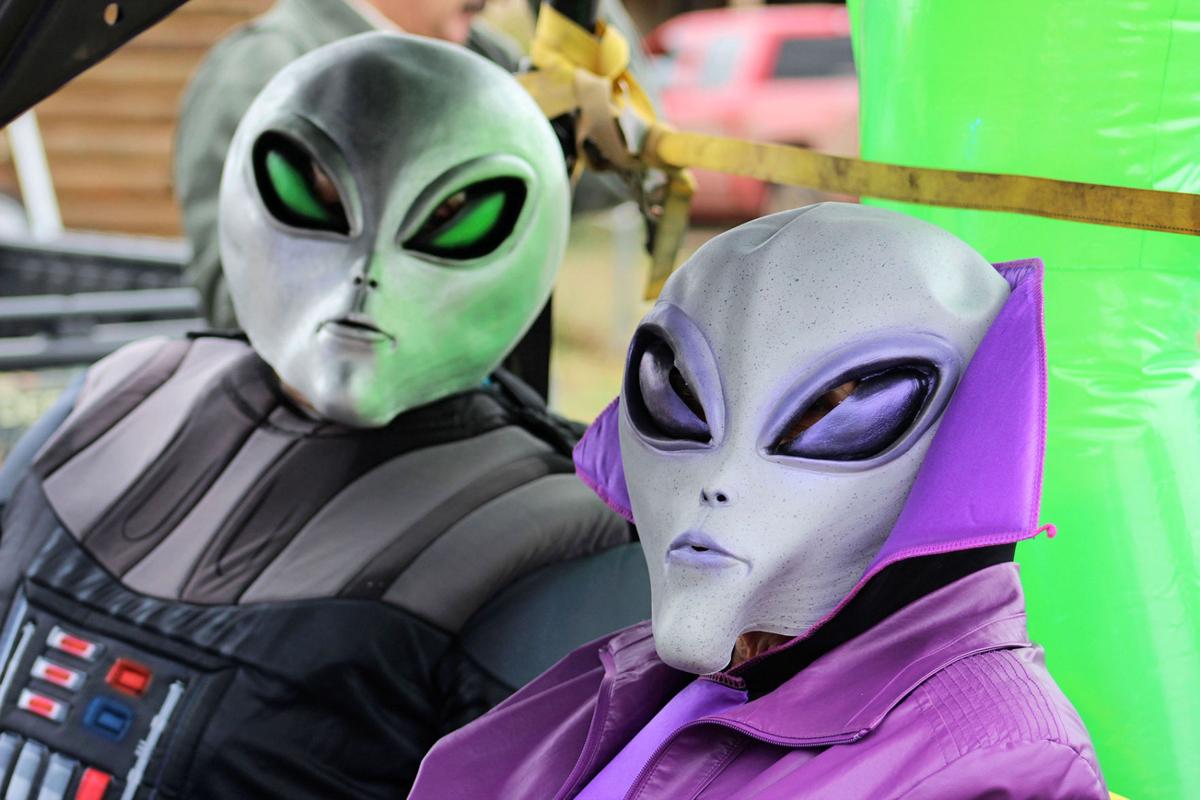 As part of the festivities at the recent UFO Rendezvous, James and Sally Neiman were some of the stars of the parade and costume contest. 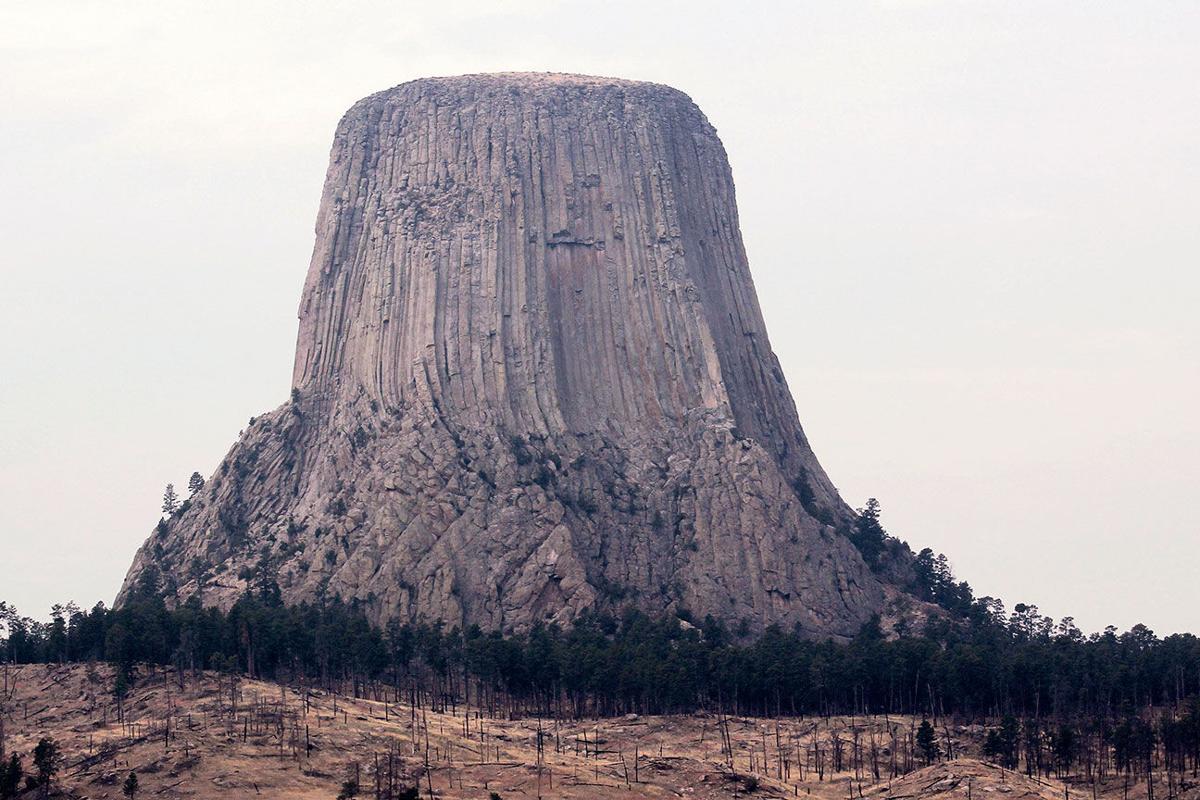 Devils Tower, near Hulett, Wyoming, became the first national monument in 1906 and is also is the focal point of the UFO movie “Close Encounters of the Third Kind. 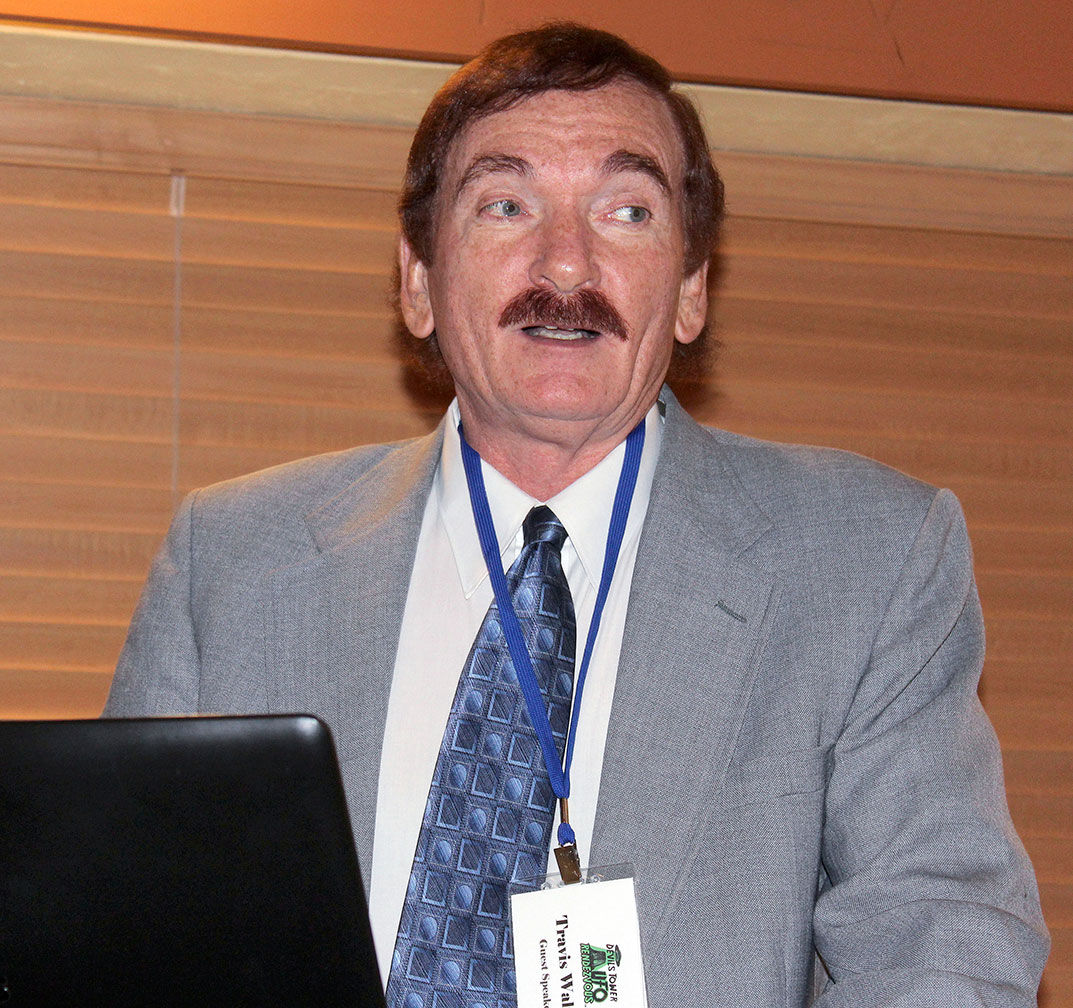 At the recent UFO Rendezvous in Hulett, Travis Walton told the story of his 1975 alien abduction. 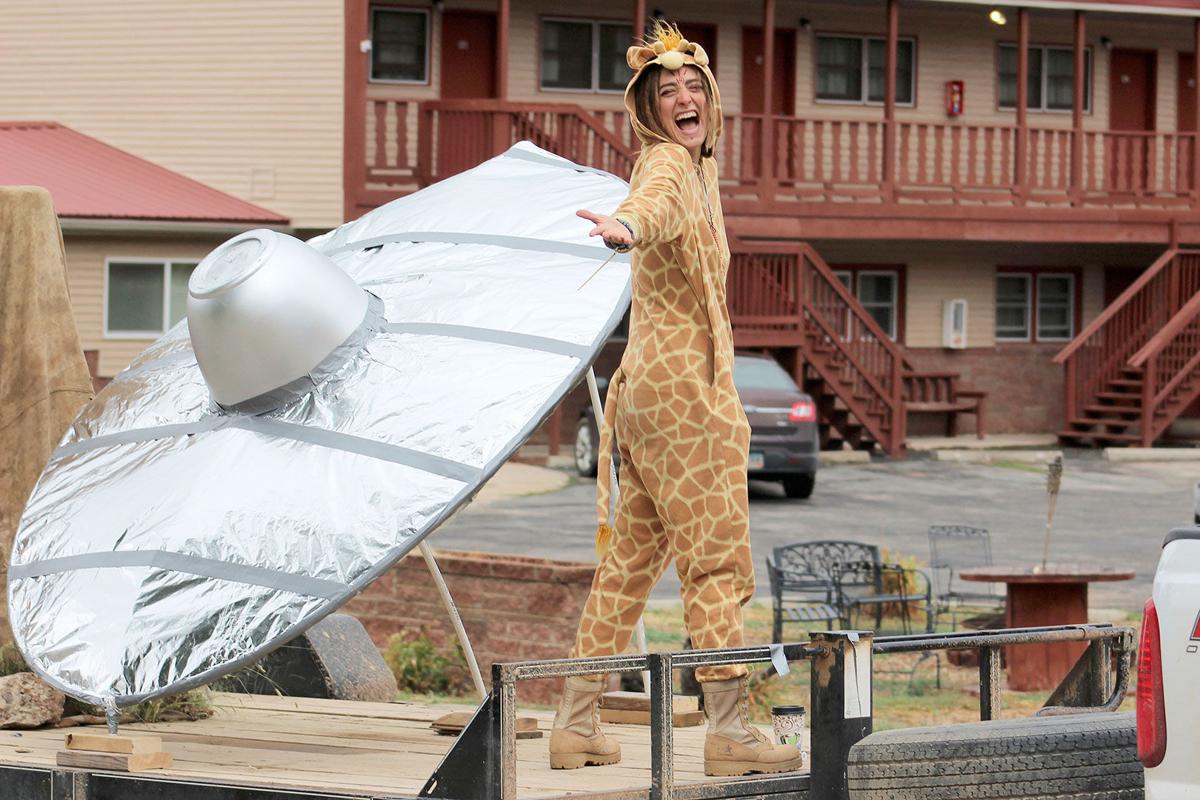 Giraffe Girl, Lit Eimi, was an enthusiastic participant in the alien-themed parade at Hulett’s UFO Rendezvous near Devils Tower. 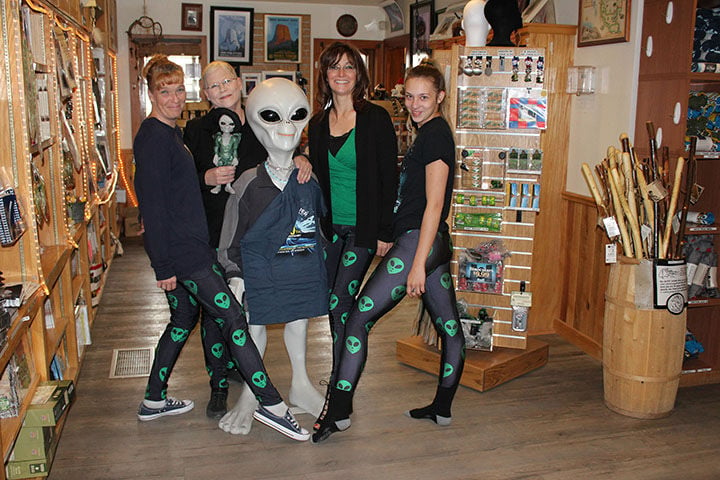 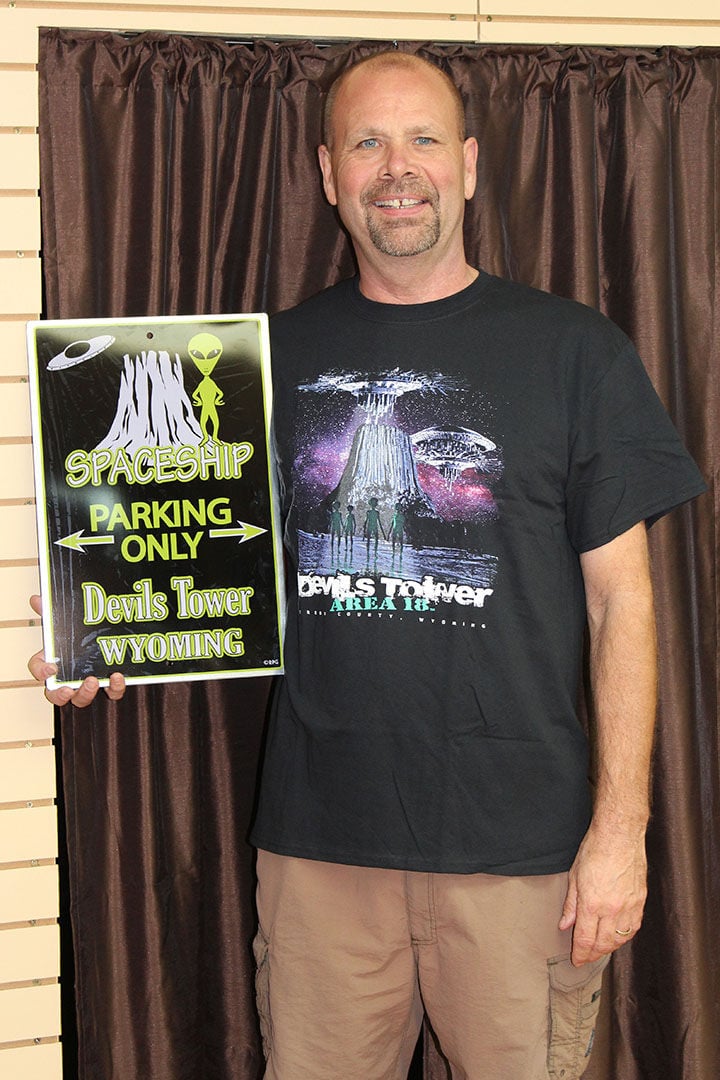 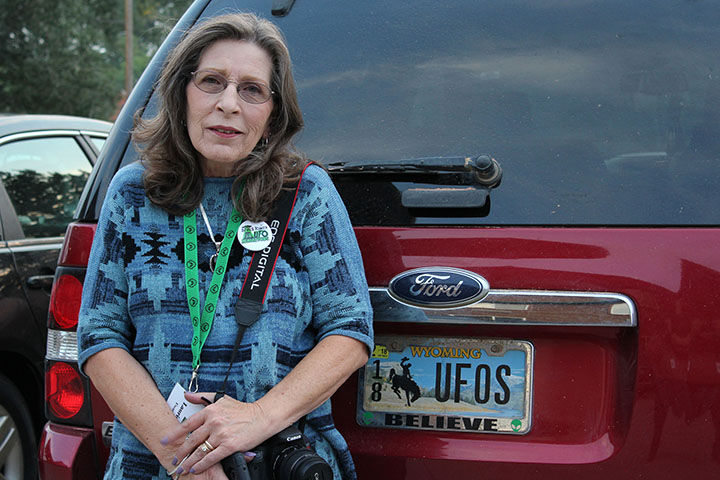 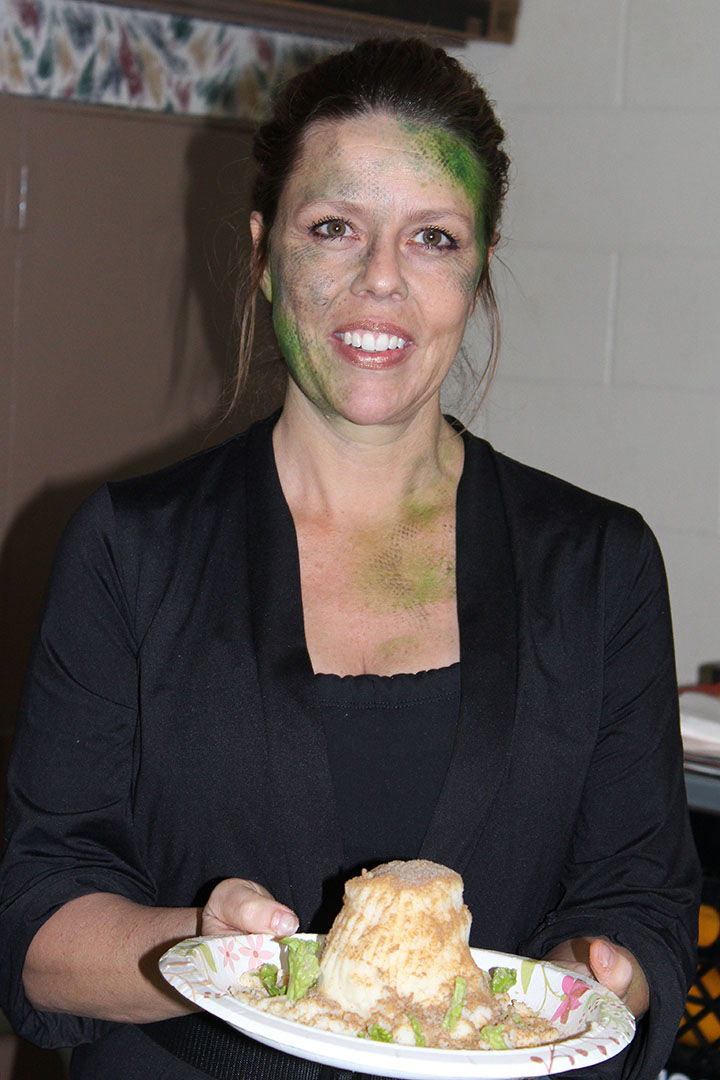 Christine Edwards was the winning entry in the mashed potato Devils Tower building contest.
1 of 8

As part of the festivities at the recent UFO Rendezvous, James and Sally Neiman were some of the stars of the parade and costume contest.

Devils Tower, near Hulett, Wyoming, became the first national monument in 1906 and is also is the focal point of the UFO movie “Close Encounters of the Third Kind.

At the recent UFO Rendezvous in Hulett, Travis Walton told the story of his 1975 alien abduction.

Giraffe Girl, Lit Eimi, was an enthusiastic participant in the alien-themed parade at Hulett’s UFO Rendezvous near Devils Tower.

Just that morning as the first annual Devils Tower UFO Rendezvous revved up a few miles down the road, Jim Gruehl conducted inventory and counted 40 different alien items for sale at the Devils Tower Trading Post in Hulett.

“Send More Tourists, The Last Ones Were Delicious,” read one sign. “Spaceship Parking Only,” was another.

This may be the center of the universe for alien memorabilia.

Devils Tower, the signature character in the movie “Close Encounters of the Third Kind,” owns the horizon in this eastern region of Wyoming, a unique monolith of symmetrical rock standing 5,112 feet above sea level .

It emanates the same magnetic attraction as it did 40 years ago when “Close Encounters” made its debut, and in 1906 when President Theodore Roosevelt designated it the first National Monument.

More than 500,000 accounted-for people visit each year along with an uncounted number of aliens.

Some of the gravitation was sparked by the Steven Spielberg movie released in 1977 and re-released for a 40th anniversary this month.

For a few days in mid-September, Planet Hulett, population 383,

located in the shadow of Devils Tower, was transformed by true believers in unidentified flying objects, becoming the epicenter of  the ongoing search for intelligent life in the universe.

The Sept. 14-16 program was organized by Laurie Tucker and others and included lectures on “UFOs Are Real” and “Alien Abduction.”

Tucker, who owns vehicles with Wyoming license plates “C-UFO” and “UFOS,”  ensured the agenda featured a community parade with alien theme, a costume contest and a Devils Tower mashed potato sculpture contest. This was a tribute to a movie scene when a UFO-obsessed Richard Dryfuss shaped Devils Tower at the dinner table.

“I take it more seriously,” Tucker said of UFOs, “but I also have fun with it.”

Tucker said a tentative reach-out to Dreyfuss was aborted when she heard he commands $70,000 an appearance.

That’s a lot of mashed potatoes.

In another “Close Encounters” homage, the Main Street Civic Center played the 135-minute movie when the heavens did not cooperate and an outdoor show was rained out.

Frieda Dent, 93, ran the movie. She remembered filming in the 1970s and how some Hulett residents were extras in a panic scene as government officials cleared the Devils Tower area.

“Every time I see it, I see something different,” Dent said.

The locals’ attitude  seemed to be, “Hey, who are we to say there’s nobody else out there?”

UFOs have long fascinated, perplexed, tweaked imaginations, been pshawed, or described as fabrications of the crazy.

The debut of American UFO consciousness, as well as Exhibit A of accusations of government conspiracy to hush up spaceships penetrating U.S. air space, basically dates to Roswell, N.M., in 1947.

A crashing flying saucer was reported in the July 8 edition of the Roswell Daily Record. The mysterious “flying disc” was taken into custody on a ranch by the U.S. military and soon after was identified as “a weather balloon.”

Scientists say the earth was formed 4.5 billion years ago. Since it presupposes a visiting alien culture would be more advanced technologically than humans, it was suggested aliens may have  checked out earth long ago with only mild interest and UFO sightings could be periodic reconnaissance follow-ups.

During a panel discussion it was noted many scientific ideas or inventions were dismissed as harebrained long before being proven.

When Columbus set off to sail the ocean blue in 1492, a large segment of the population still believed his ship was going to drop right off the edge of the flat earth.

How many people living in 1850 envisioned the jet plane, putting a man on the moon via rocket ship or the cell phone?

“I don’t think we can actually think of anything that’s impossible,” said astronomer Marc D’Antonio, whose presentation was titled, “The Real Science of E.T.”

Generally, in science fiction movies aliens are portrayed as looking quite different from the human race. They are either good guys who wish to make friends, such as in the 1982 “E.T-The Extraterrestrial,” or guys who want to annihilate everyone, such as in the 1996 “Independence Day.”

With such a massive universe, traveling across it for millions is an issue of relevance. In some films astronauts are placed in suspended animation for years as they hurtle towards destinations.

“Light speed is the speed limit of the universe,” D’Antonio said of the 186,000 miles-per-second measurement.

That could be an obstacle for reaching Sagittarius Dwarf Elliptical Galaxy – the nearest one – 662 trillion kilometers – from Earth.

D’Antonio said aliens may have, or humans might someday,  make “an end run around it.”

Have Americans been conditioned for that in “Star Trek” by “Beam me up, Scotty?”

Speaking of movies, the new version of “Close Encounters” had been available for just a week, but when asked, about half of the 50 listeners said they had already seen it.

Many participants made pilgrimages to Devils Tower; one of them being Alejandro Rojos of Arizona, a first-time viewer who said, “It’s incredible.”

Rojas, a host for “Open Minds” radio, and a science and entertainment blogger for the Huffington Post, talked about “Close Encounters,” “E.T” and “Gremlins,” saying Spielberg was probably influenced by a highly publicized UFO incident in Kelly, Ky., in 1955.

Five adults and seven children in a farmhouse where no alcohol was drank attested they spent four hours employing gunfire to hold off little men from a spaceship that landed on the property.

The aliens were described as 2-to-4 feet tall with claw-like hands and later “little green men” was appended to the narrative. Subsequently, little green men became a somewhat standard look for aliens in the media.

The movie “Fire In The Sky” differs considerably from Spielberg’s work.

Based on the book of the same name by Travis Walton, who was played in the 1993 film by D.B. Sweeney, it is purported to be the true story of a mind-bending alien abduction. Despite being a better-documented incident than others, Walton ever since has been derided as crazy.

“It never goes away,” said Walton as he began telling his spell-binding tale.

The Arizona logger, then 22, and six other crew members, were driving out of a national forest on Nov. 5, 1975. They halted when they saw a bright light through some trees and stopped to investigate. Walton, on the passenger side, jumped out of the truck.

“There was a clearly defined metallic disc outlined against the sky,” Walton said. “It was frightening and beautiful.”

Feeling entranced, Walton began walking toward the UFO as his co-workers yelled to get back in the vehicle.

A beam of light lasered Walton with “a stunning sort of force.” He was hurled 20 feet and knocked unconscious. Convinced Walton was dead, his friends fled to report to authorities.

Walton, weak and scared,  woke in a strange room surrounded by aliens. When left alone he made a run for it through the craft, but was re-captured. Eventually released, he staggered sobbing to a phone booth to call relatives.

Walton had been missing for five days and a widespread manhunt was conducted. Fellow loggers were interrogated and suspected of murder, though they passed polygraph, drug and sobriety exams. So did Walton.

Despite the passage of years, at times Walton teared up in his telling. No one has shaken his or the other loggers’ story, with multiple lie detector tests passed. But the incident is still called an elaborate hoax.

“I’m certain I’m not the only one,” Walton said of being abducted by aliens. “It’s very common for things we fear to become the butt of jokes.”

Walton was asked if he had emerged from merely being lost in the woods for five days having likewise lost 10 pounds from lack of food and water, whether he might not have been declared a hero for surviving.

Walton paused. “It might have been completely different,” he said.

Devils Tower is completely different. It cannot be mistaken for any other rock formation.

Square-like, with striations on its sides, its composition is molten rock. But its origins are as mysterious as UFOs.

Devils Tower is considered sacred in Cheyenne and Arapahoe oral traditions long predating “Close Encounters.” Visitors pause for reflection on benches at its base, necks craning upward, perhaps scanning for aliens still hovering from the movie.

A National Park Service ranger was asked how often she is quizzed about the movie laughed, and said, “Hundreds of times a day.”

Four female workers at the visitors center gift shop wore matching lycra alien-design pants and hobnobbed with a few-foot-tall alien modeling a Devils Tower zip-up sweatshirt. A new sticker reading, “Hello, my name is Lloyd” was slapped on his chest.

There were numerous Lloyd-lookalikes at the cold, but not rained-on Hulett parade. Jude Talaba of Boulder, Colo., like a ventriloquist held an alien in her arms, and said, “He was born just three days ago.” As in purchased.

Andy Bears drove a golf-cart disguised as a spaceship. Strapped in, he said, “I can’t get out.” Another alien abduction.

Ivy Flores manufactured a Devils Tower for her float consisting of a barrel covered in tinfoil and sprayed brown, with stones and foliage around the base, like the genuine article.

Smaller rocks and greens were  available when others shaped mashed potato Devils Towers like build-your-own sundaes.

Giraffe Girl, Lit Eimi, claimed to be an alien from “everywhere” who parachuted in. Her full giraffe outfit included a tail.

James Neiman, 87, and wife Sally, 83, love to dress up and she ordered spiffy alien duds online. Yet the senior-citizen aliens lost out in the costume contest to a 9-year-old from the wrong movie.

In impeccable character imitation wearing a red, hooded sweatshirt, pushing a bicycle with an E.T. doll in a basket perched on the handlebars, Ben Harrison as Elliott won the crowd applause.

Devils Tower beckoned, but prepared to pedal skyward, Harrison could not gain lift-off because the chain busted on his bike during the parade.