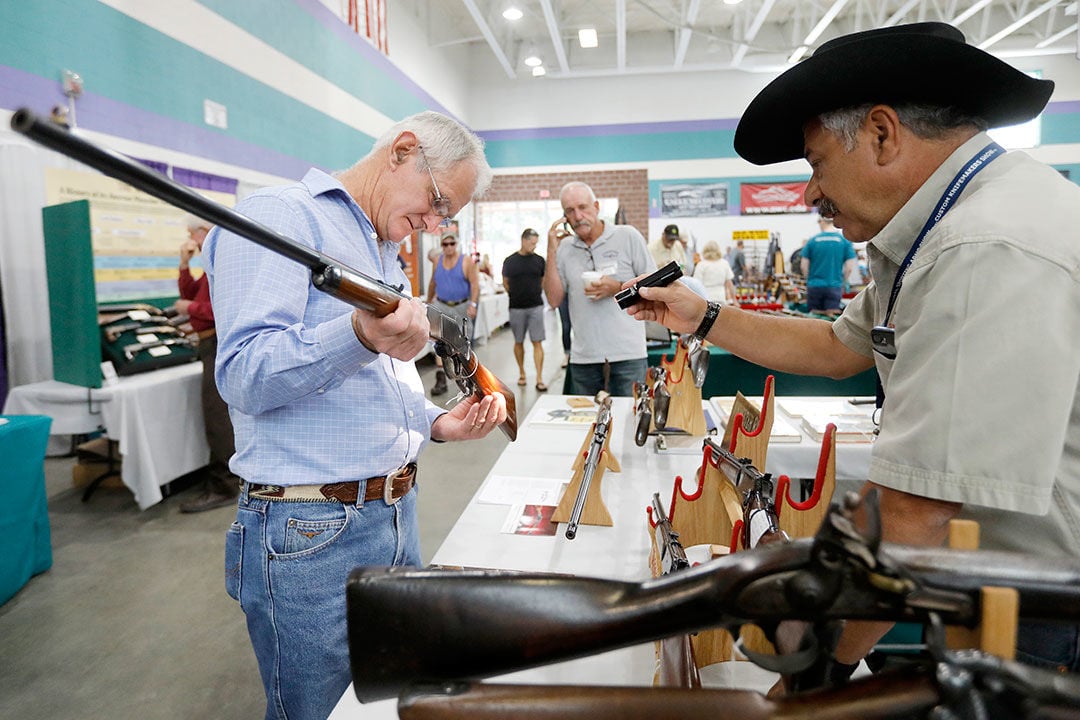 Randy Saba of Western Legend Collectibles (right) shines a light on a Winchester 1873 .38-caliber rifle for Steven Moore on July 14 during the Winchester Arms Collectors Association show at Riley Arena. 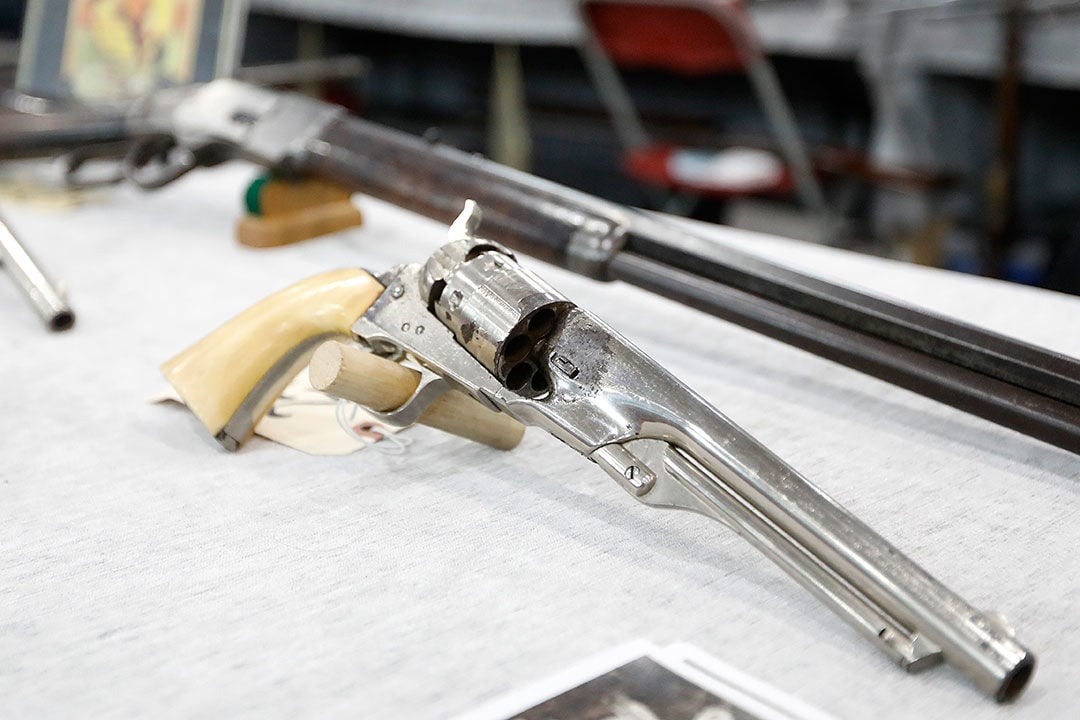 Randy Saba of Western Legend Collectibles (right) shines a light on a Winchester 1873 .38-caliber rifle for Steven Moore on July 14 during the Winchester Arms Collectors Association show at Riley Arena.

Jim and Jan Grueter are big fans of the Winchester Arms company.

The couple brought 35 firearms to the annual Winchester Arms Collectors Association’s show last weekend at the Riley Arena, just one in a sea of tables filled with firearms from the Old West.

On one table lay a Winchester rifle and Colt revolver once owned by Buffalo Bill.

Nearby a Smith and Wesson Russian revolver once owned by Pancho Villa sat on display.

People would be forgiven for thinking they had just walked into a museum.

Winchester rifles, from the venerable 1873s to slightly lesser known models like the 1895, dominated the tables, but there also was a host of other items, from hunting rifles to old ammunition and vintage rifle retail boxes.

The Grueters came from Winchester, Idaho, and they love Winchesters.

“That’s why we moved to Winchester,” she said. “(Jim’s) a true collector.”

The space was filled with collections, some for sale and some just to view.

One man, who came all the way from Italy and boasts one of Europe’s largest collection of western firearms, was looking to get the Buffalo Bill Center of the West interested in exhibiting some of his collection.

He brought dozens, but he has roughly 900 items in his Tuscany home.

“My dream is to transfer all my collection from Italy to America,” he said. “My repertoire is finished now.”

His favorite firearm, although he said it was hard to pick favorites, is a 6-shot Colt single action army.

Rick Oleson, of Deadwood, S.D., who runs the show with wife Margi, said more than 300 trade and display tables were set up for the event, which has been in Cody for decades, having moved from its initial location in Montana.

Profits from the show go to scholarship programs for youths.

Oleson has been involved for 20 years. His first Winchester was a classic 1873.

And like the others spread out over the arena, the first was only the beginning.

Bob Campbell of Big Stone City, S.D., said he’s been collecting since 1965. His first gun was a Colt .22-caliber handgun, and he still has it. In fact, while he had a large variety of antique firearms on display, he said .22s were still his favorite.

“It’s kind of a hobby that got out of control,” he said.

For Mike Methe of New Hampshire, the event was a welcome return after a decades-long absence. This time he had brought a bunch of firearms specifically to sell, but back in the early ’90s he had quite a collection, he said. Then, at one show a man asked to buy his entire collection. The man wrote an amount on the back of a piece of paper, Methe looked it over, showed his wife and sold the collection.

Back in the show after a long absence, Methe looked out at the crowd.

But for a weekend, the show was thriving, and there were plenty of youth and young adults checking out the firearms, maybe even enough interested younger people to keep the show alive for years to come.