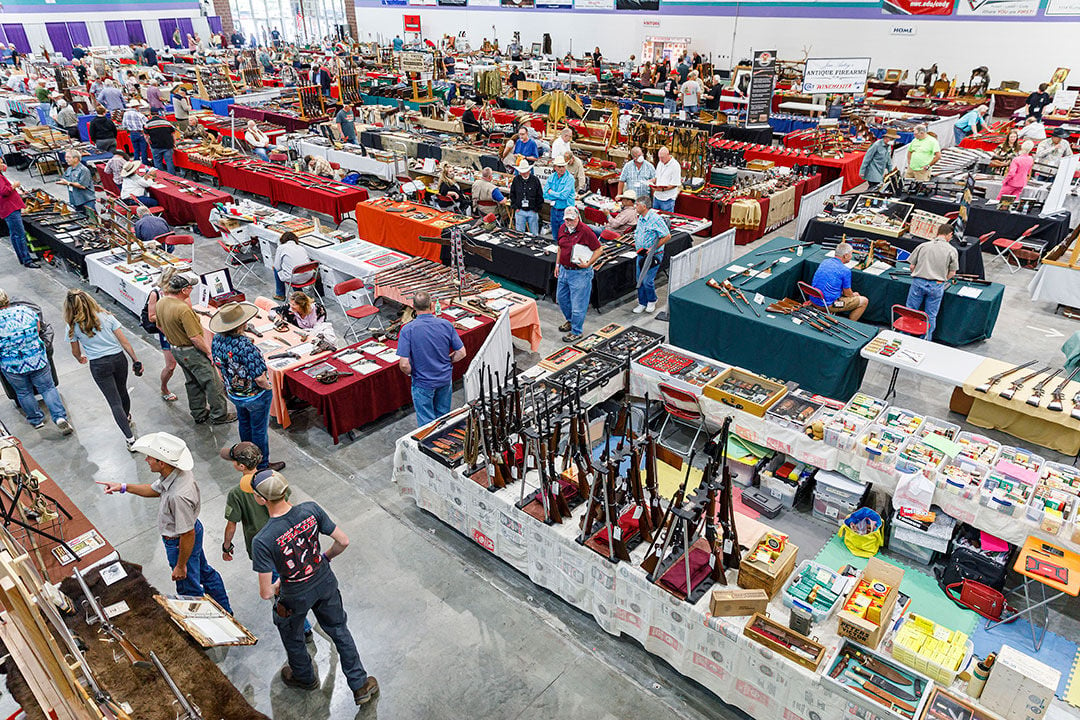 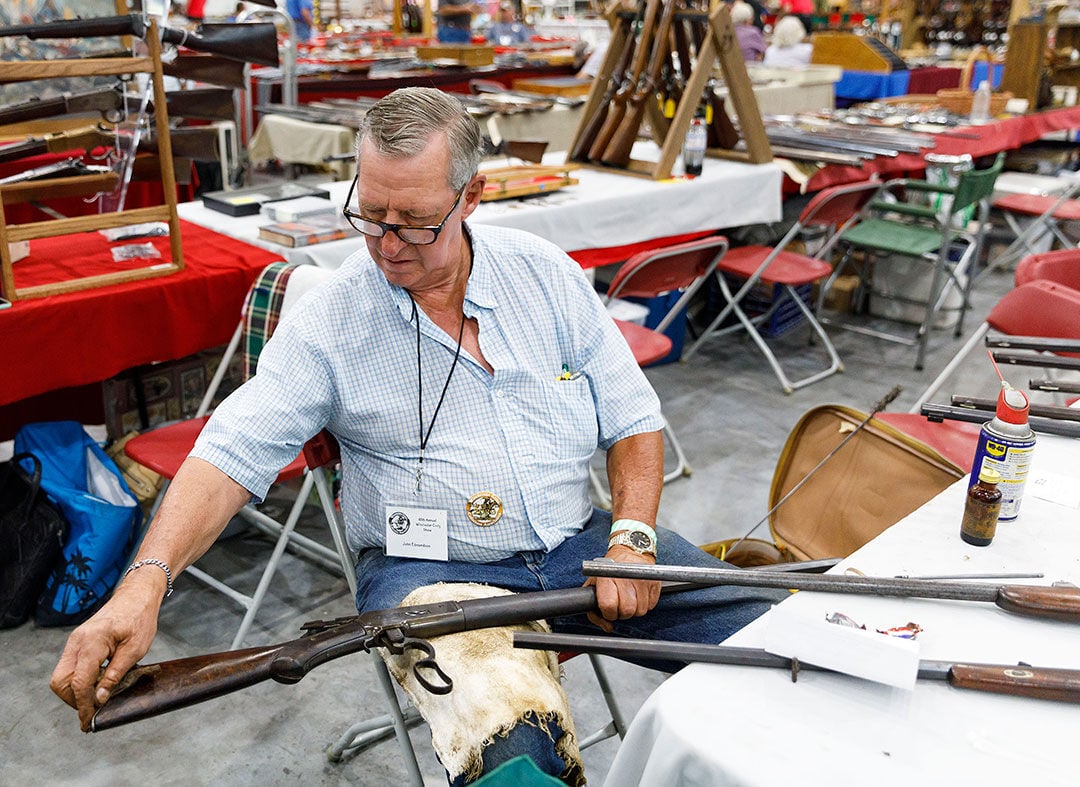 John Edmondson cleans an 1886 Winchester at his booth at the Winchester Arms Collectors Association show Saturday at Riley Arena. 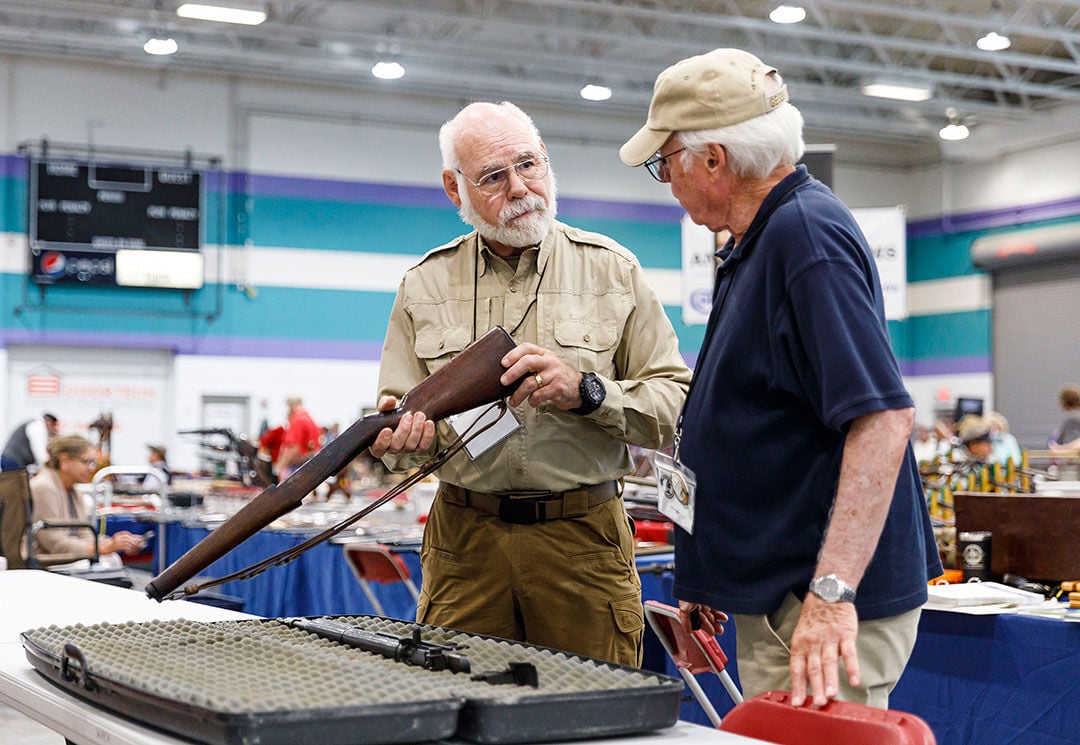 John Edmondson cleans an 1886 Winchester at his booth at the Winchester Arms Collectors Association show Saturday at Riley Arena.

Rick Stark of Baker, Mont., spent some time Friday morning looking over one of the old rifles he had brought to show to possibly sell.

The desire to fix old guns is one of the primary reasons he got into collecting around 50 years ago, and the reason he was at Riley Arena for his fourth Winchester Arms Collectors Association show.

“I enjoy the show down here,” he said. “There are guns here you don’t see anywhere else.”

There are Winchesters and Sharps, Enfields and Mausers. You can also find Colt and Smith & Wesson revolvers.

Roughly 300 tables last weekend at the arena were filled with many old firearms, some newer firearms and other old objects to pique curiosity.

Organizer Vinny Martin was pleased with the showing Friday morning considering the pandemic.

“We had a few guys who canceled, but for the times and where we’re at, we’re very pleased with the amount of table vendors, attendees,” he said.

Fred Undersnick of Sioux Falls, S.D., has been coming to the show every year since 1998. He started collecting in the 1970s and didn’t stop at just Winchester rifles.

On display at his table Friday was a Winchester alarm clock, homemade gun racks and a grain scale not from the firearms company, but from Winchester, England.

His love of everything Winchester started early.

“As a South Dakota farm boy, I grew up with a Winchester shotgun,” he said.

Gary Roedl, one of many Montana resident making the trip south, started his collection as a youth with a single-shot .22.

“I’ve been collecting guns as long as I can remember,” he said.

He had a couple of World War II battle rifles on display, and a German Mauser and British Enfield, but said his favorite was a Kentucky long rifle.

Jim Autry’s collection is on a commercial scale. His Chandler, Ariz., company brought around 90 firearms to the show, including many Winchesters.

“Sometimes we get them at shows, but most of the time it’s private collections,” he said.

None of the firearms on display were new, but just about all of them could be used for more than a wall ornament.

“All except the early rimfires can shoot,” he said.

And if you can find .44 rimfire ammo, he said you could even shoot the old Henrys.

The common thread amongst many at the show wasn’t just a desire to collect pieces of history, but a love of firearms. Autry’s love first kindled with a Winchester 1400 shotgun at age 14.

Stark shoots some of the guns in his collection, hangs some on his walls and works on a fair number. He said the old guns are easier to work on, as long as you can find the parts.

As to how he ended up with enough old firearms to spread across a table at the show?

“You kind of just accumulate them,” he said.

For a few days at the arena, he was far from the only person who knew that feeling well.