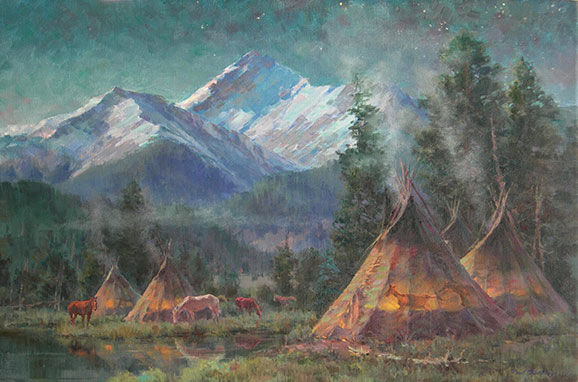 “When Stories are Told” by Paul Kethley will be the subject of a talk at the Cody library on Thursday, Sept. 17. 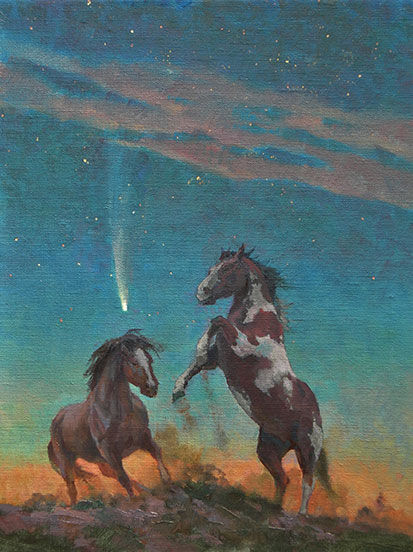 “Dancing with Comet Neowise” by Paul Kethley tells a story. Learn more at his reception Sept. 17.

“When Stories are Told” by Paul Kethley will be the subject of a talk at the Cody library on Thursday, Sept. 17.

“Dancing with Comet Neowise” by Paul Kethley tells a story. Learn more at his reception Sept. 17.

Local artist Paul Kethley will host a reception in Grizzly Hall at the Cody library. The program, 4-6 p.m. Sept. 17, is free and open to the public. He will present his major works followed by a discussion of his creative process and placing a narrative in a painting. Light refreshments included. Attendance will be limited to the first 20 people to allow for social distancing. Masks are strongly encouraged.

His exhibit “Legends of the Frontier,” a collection of 20 original oil paintings, will be on display at the library through Sept. 30.

After leaving the commercial printing industry in 1989, Kethley focused on developing paintings that told stories. “With the western art market being so competitive I found it necessary to add a bit of a narrative to most of my paintings because it adds an extra appeal that is uncommon to most of the fine art I encounter. However, it takes more research, thought and sketch time to create such pieces. As a simple example, there are many paintings of Bison in western art shows with most representing a photo of them standing in a prairie, whereas my painting might show them running and the reason why which could be a dust devil (wind blown dust funnel). This adds the element of action, motion and what’s causing it. I believe this makes the piece more unique and collectable,” Kethley said.

Kethley’s creative process involves first, inspiration and imagination, then a simple charcoal, thumbnail sketch to record what’s in the “minds eye”. If this step proves to be promising, a small color mock up in oil follows with more detail and developed color pallet. After many small adjustments to the mock up, the final larger piece is scaled up and completed to include even more detail and refinement to all major elements of the painting. During the work in process stage, there are planned pauses of the work so that progress can objectively be evaluated.

Since the early 80’s Kethley has organized and conducted several private drawing and outdoor painting workshops in Colorado and Utah. He enjoys interacting with students, sharing experiences and live demonstrations on site to help students overcome typical problems related to landscape painting and the anatomy of animal and human figures.

His work can be seen currently at the library, the Bozeman Trail Gallery in Sheridan, Wyo., Cody Country Art League and at paulkethley.com.