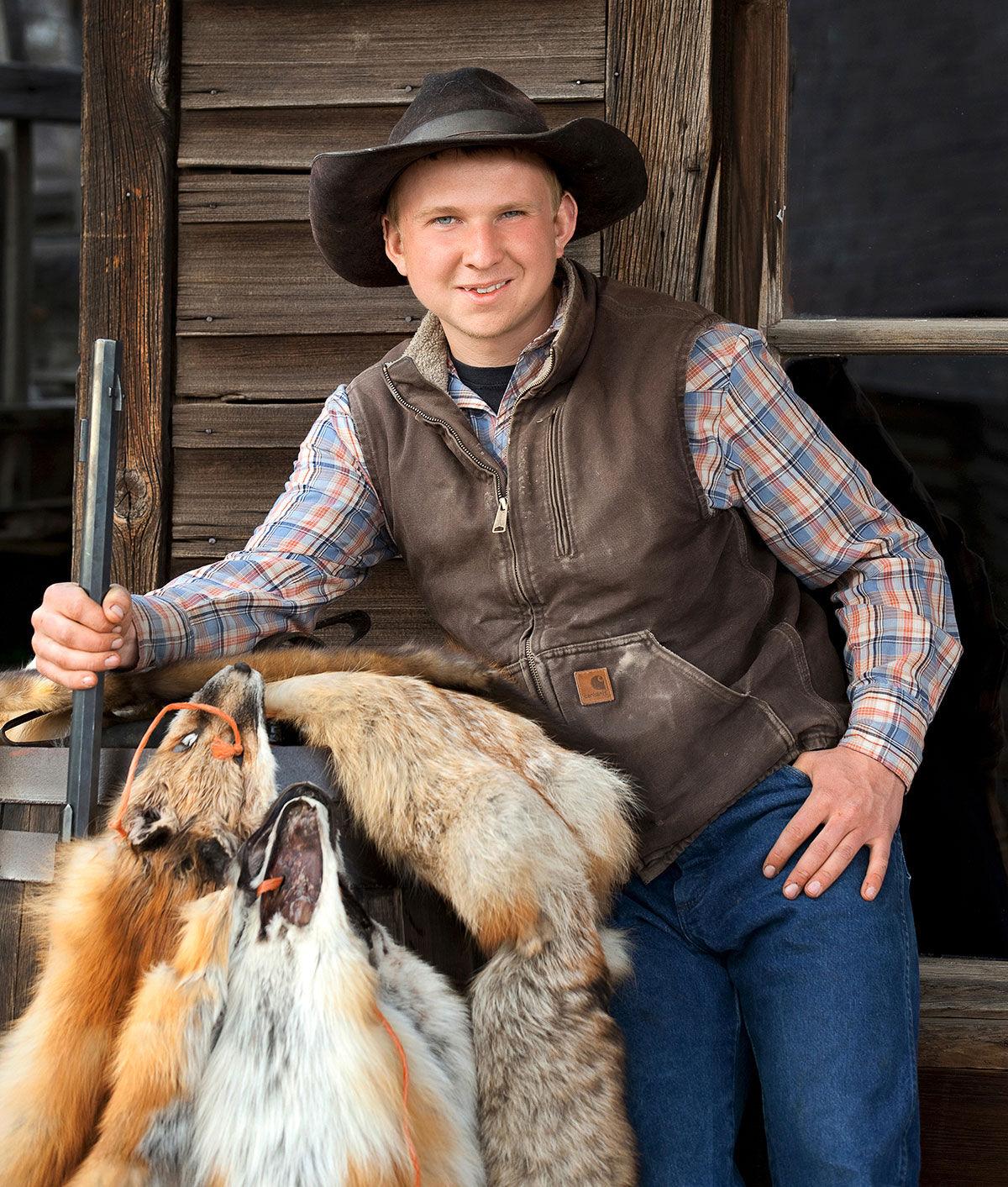 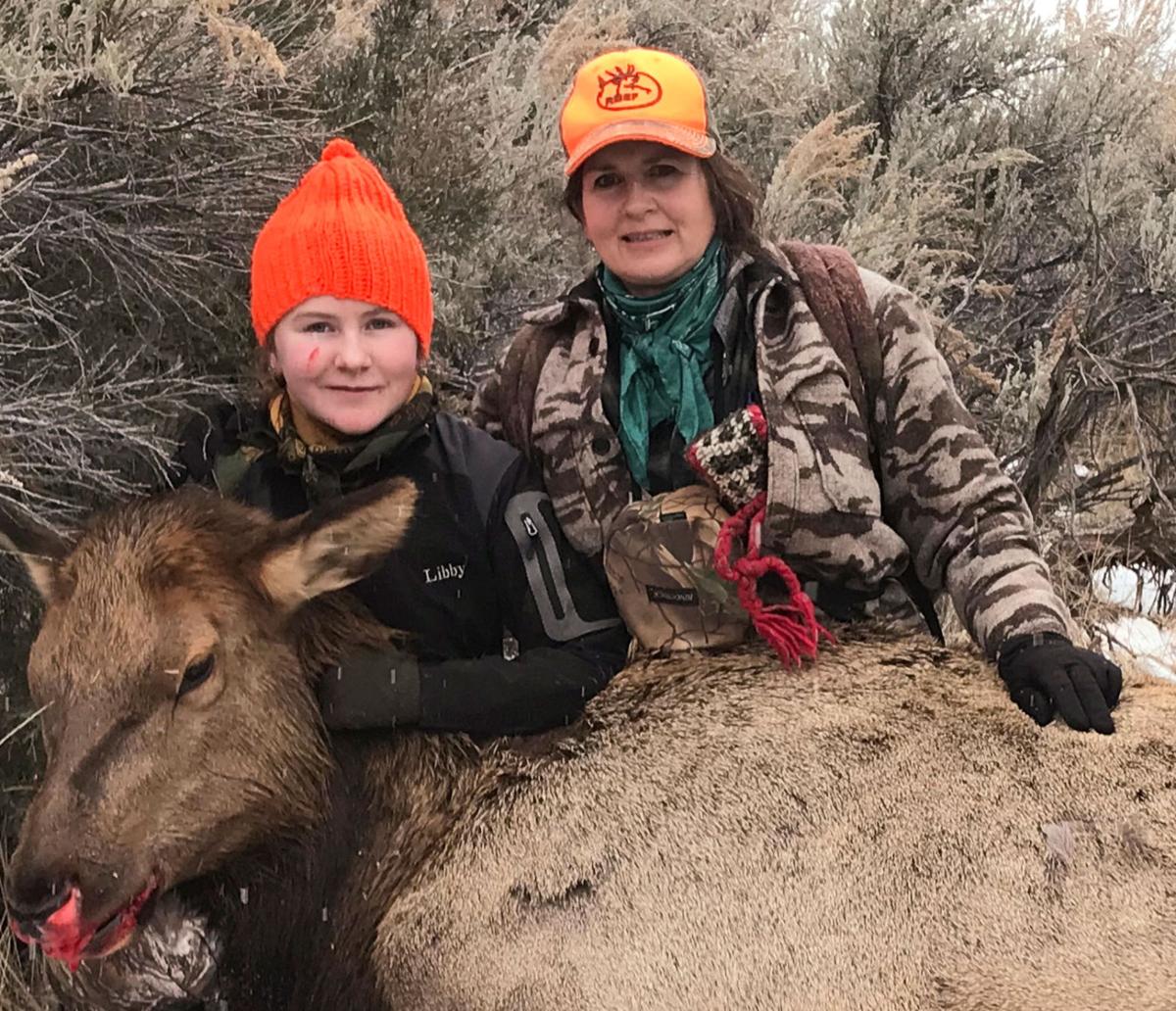 Libby Logan of Guernsey is pictured after her successful elk hunt with her mom Rebecca Simpson. (Courtesy photo) 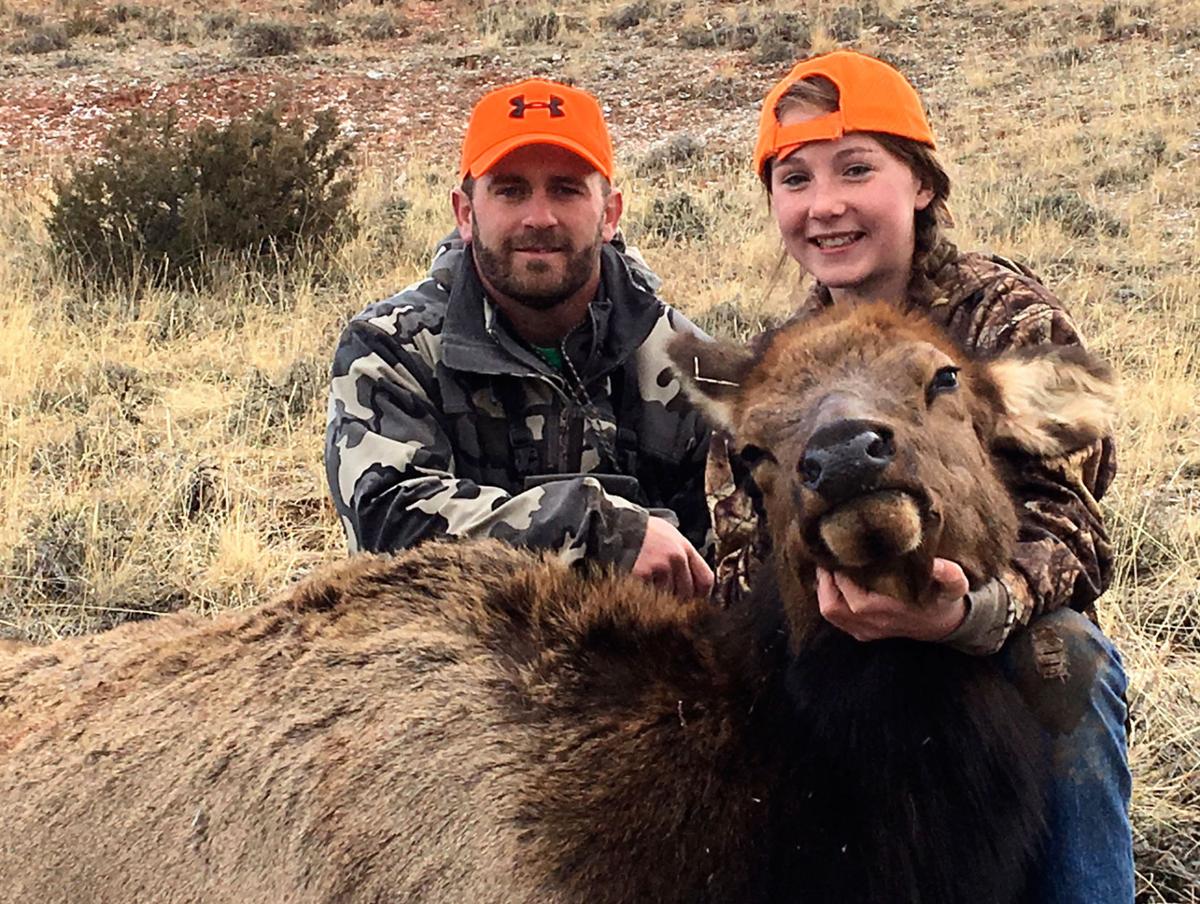 Libby Logan of Guernsey is pictured after her successful elk hunt with her mom Rebecca Simpson. (Courtesy photo)

When Lexi Overfield’s rifle shot pierced the elk’s heart it symbolized the perpetuation of a memory and simultaneously vicariously lifted the heart of a grieving mom whose son couldn’t be there.

The elk was dead, but in a roundabout way, Skyler Gabel lived on.

Overfield’s stalk began before daylight on a Ten Sleep property with guide Randy Smith of Wapiti Ridge Outfitters leading the hike over the benign terrain marked by sage brush and juniper.

This was the first elk hunt for the 12-year-old Thermopolis middle school girl, but she was a champion Wyoming youth shooter who had hunted deer and antelope. Overfield hoped hitting inanimate targets and bagging other species translated into successful elk hunting.

The weather was mild, in the 40s, in November, and the party only had to traverse a half-mile before the perfect cow elk presented itself.

“It didn’t take long to find one,” Smith said.

Nor did it take long for Overfield to shoot one after ascending the top of a hill. When she pulled the trigger she was prone at 352 yards.

Stephany Anderson was as happy about that shot as if she had witnessed it. She had made it possible as a tribute to her hunting-oriented son who died in an automobile accident in 2013.

Overfield – and Libby Logan, 13, of Guernsey – each won the prize of an elk hunt in Skyler Gabel’s honor by excelling at Wyoming shooting competitions.

“I actually met Skyler once in passing,” the older Overfield said. “This (his daughter winning a hunt in Gabel’s memory) was pretty special.”

The way Anderson tells it, Gabel became passionate about hunting and the outdoors when he was 10, engrossed by stories an outfitter told at the library. But she had no background in shooting, hunting and riding horses to help him.

A single mother who is a Cody High School teacher, Anderson said a 4H leader tutored Skyler and some outfitters allowed him to perform volunteer labor in the backcountry after he turned 12.

Eventually, Gabel set out on an elk hunt on his own. He went out on foot since he had no horse and even tramped around harsh terrain on a broken ankle, ruining a cast. No luck.

Gabel, who was homeschooled, was a talented writer. He penned essays and entered contests. He won the Wyoming Game and Fish essay writing contest and the national NRA Civil Rights Defense Fund Youth Essay Contest.

Another passion was studying history and writing about that topic.

Gabel also wrote an inspired letter about his goals and desire to hunt and sent it to the Rocky Mountain Elk Foundation, which earned him a free elk hunt.

One of Gabel’s essays was titled “Forever Wild.”

In part it reads: “I feel the haunting presence of seven-plus generations who had ridden in awe beneath the same sunrise,” he said of a pack-horse trip along a Bald Ridge trail. “Wyoming’s outdoor heritage means more than pretty pictures and fresh air. It’s about a wilderness that courses through our state and through the veins of those lucky enough to get mud on our boots stomping around it. We are forever united with the wild of Wyoming.”

Through his teens Gabel worked for area outfitters and when he turned 18 he earned a guide’s license and began working for Pass Creek Outfitters, located in the Bridger-Teton National Forest.

On Oct. 26, 2013, Gabel was checking his trap lines, working his way back to Cody on the Chief Joseph Scenic Byway. He apparently lost control of his vehicle and crashed. The truck overturned and he was thrown from it.

Peter Klessens, a current CHS senior and multi-sport athlete, was on an elk hunt to Crandall with his older brother Matt and was in the car right behind Gabel.

Klessens watched people try to help Gabel and said he was taken to a nearby ranch and then life-flighted to a hospital.

Klessens said he did not know Gabel, but his brother had met him.

“It was not good,” Klessens said, recalling the vivid scene.

Two months after Gabel died in the auto accident – he was still 18 – Anderson created an internet memorial page.

In a photograph, the smiling young man has a rifle grasped in his right hand, a black cowboy hat on his head and some pelts, trapping bounty, arrayed in front of him.

Last year, thinking of Gabel’s proficiency in shooting competitions and how he developed his love for the outdoors when he was young, Anderson expanded her thinking of how to honor his life.

For the first time, in the fall of 2017, the Skyler Gabel Group awarded a youth elk hunt. Eli Jones, 13, of Upton, was the recipient. This year, two hunts were given to young champion shooters, Overfield and Logan.

Overfield said it wasn’t cold at all for her hunt and she was lucky the stalk was as short as it was.

Dad Heath said Lexi winning the hunt was “a complete surprise” and how she performed in the field was a thrill.

“It was pretty fantastic,” he said. “I couldn’t have been prouder.”

The second hunt took place in December in the same area outside Ten Sleep. Logan was accompanied by her mother, Rebecca Simpson.

There was fresh snow on the ground by then and the temperature was below 20 degrees. The party went out at mid-day. There was more hiking required for Logan’s hunt.

“It was foggy outside,” Logan recalled. “It was cold, but it wasn’t too cold. I was just really excited.”

Simpson said Logan hunted deer and antelope that year too. This try Smith led them to within 150 yards of a cow elk.

“We saw elk sign right off the bat,” Simpson said.

Logan did the rest with her shooting, bringing home food for many dinners.

Logan has big plans for her hunting career.

“There are plenty of other animals I’d like to hunt,” she said. “I’d like to go to Alaska and hunt caribou and go to Texas and hunt javelina.”

Smith, 37, said it is a treat for him to introduce young teenagers to hunting and outdoor experiences.

“I love it,” Smith said. “If I could, I would take out all kids. They had never killed an elk. It was pretty cool. I think these young girls are taking to the outdoors now. They did awesome.”

Passion for the outdoors

Those are exactly the types of things Anderson hoped to hear when she created these hunts. She had worthy young people in mind who would embrace the activities her departed son embraced.

Skyler obtained a tattoo of Crazy Horse because he admired his ferocity of spirit and what he saw as his nobility.

Anderson wrote of Skyler, “Born 200 years too late for the lifestyle he loved, he honored the spirit of Crazy Horse” with his passion for the outdoor life.

When she hears the comments of Smith, Overfield and Logan, Anderson feels her goals in offering the hunts have been fulfilled.

“I feel proud because I feel like we’ve carried on and propagated a lifestyle that was important to Skyler and can continue,” Anderson said.

Much of Skyler’s life can be told through adventure in the outdoors, but not all of it. Anderson said she would like to establish an award in his memory at Wyoming History Day held each April in Laramie because Gabel very much loved history.

There is also a passage on Skyler’s memorial page online that doesn’t touch on either hunting or history. It was written by his mom with his sisters’ help.

It reads: “In memory of Skyler, order a Wrangler for breakfast at Our Place and eat prime rib at the Irma. Take a family member out to eat at least once a week and be sure to pick up the tab. Help someone who is stalled on the highway, buy your mom roses, stop by your grandparents to visit and take your sisters fishing.”

As Stephany Anderson reviewed those words about her son she began to cry.