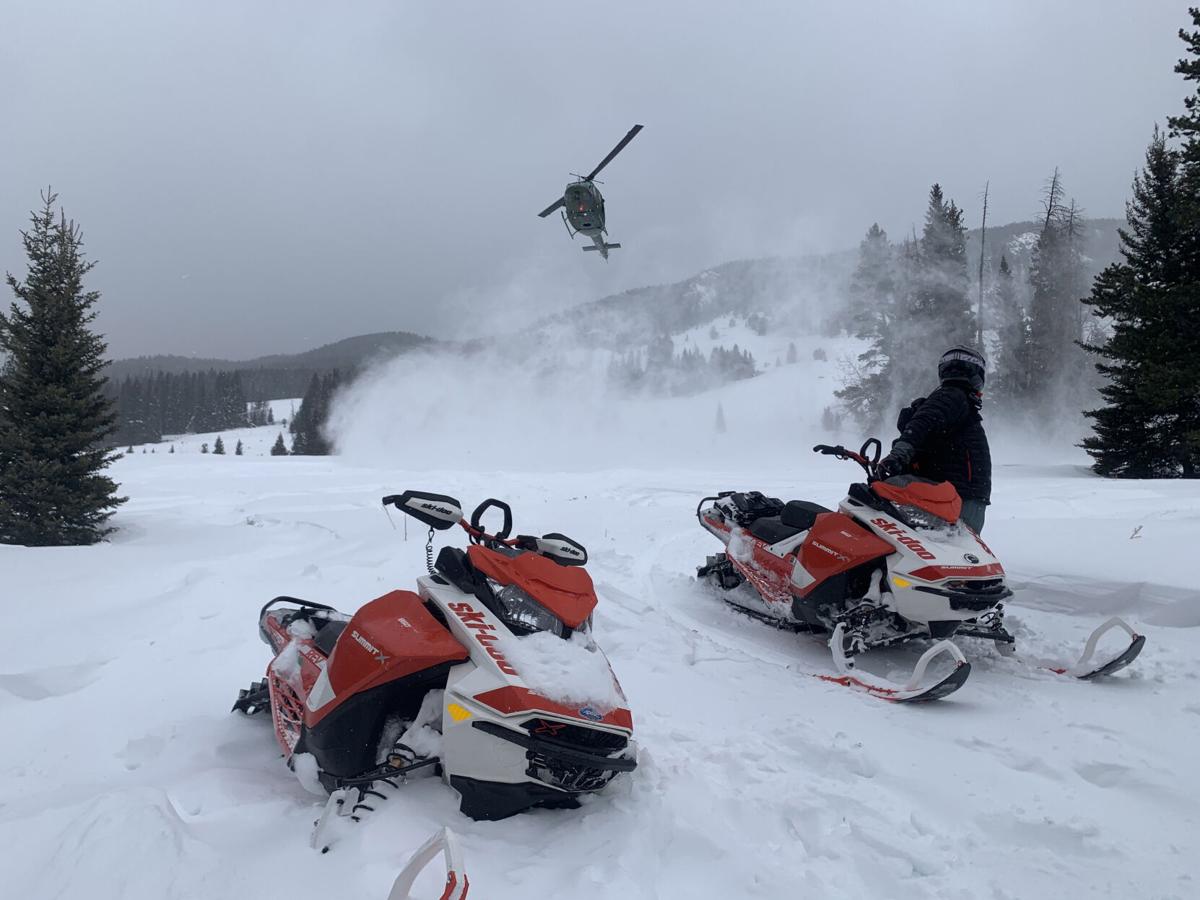 The huey helicopter took the men from near Table Mountain to a waiting ambulance. (SAR photo) 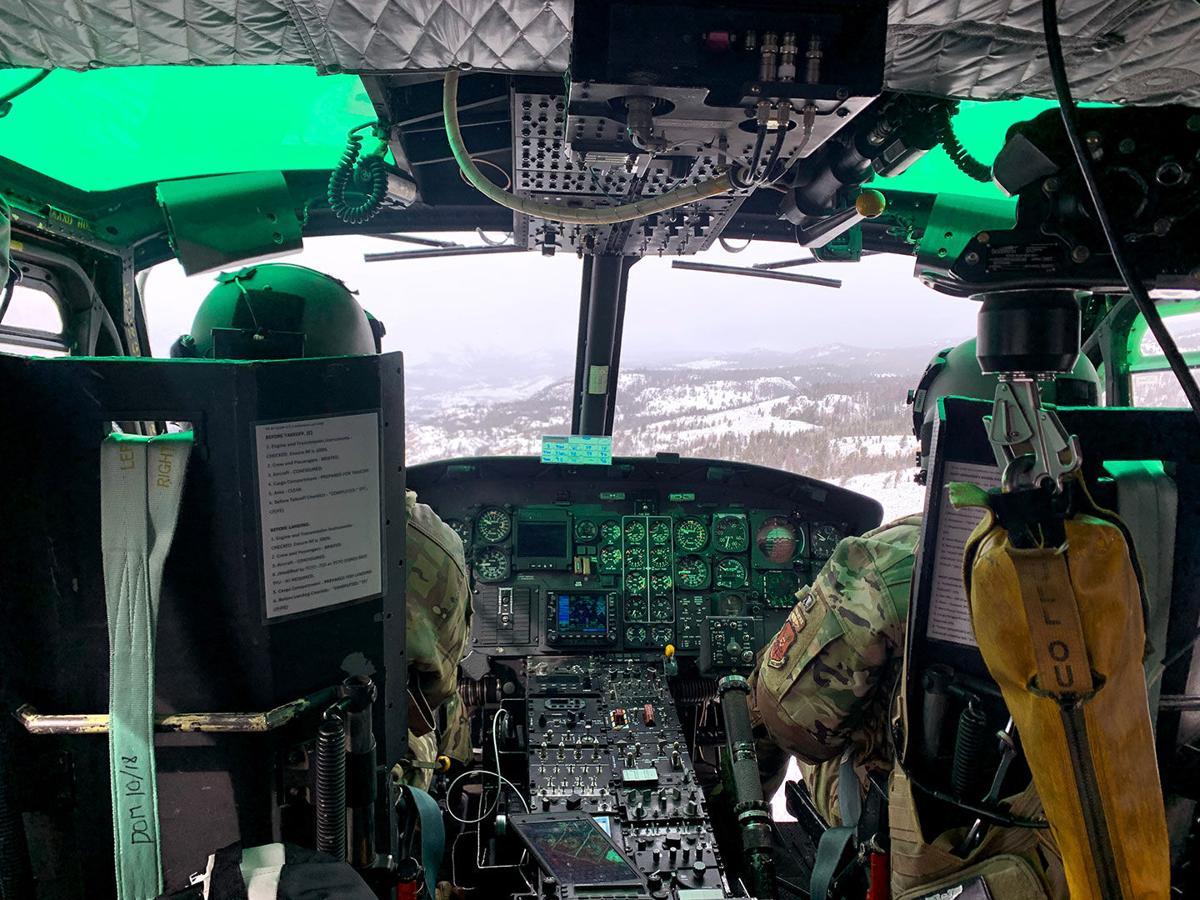 The huey helicopter took the men from near Table Mountain to a waiting ambulance. (SAR photo)

With the use of a Huey helicopter from Montana, Park County Search and Rescue saved two snowmobilers Saturday in the Beartooth Mountains.

The two men had gone missing Thursday and said they were hours from resigning themselves to “curl up and die” when they heard the sound of the Huey overhead Saturday morning.

Trevor Deal, 22, of Bridger and Maison Ostwald, 21, of Laurel, were evacuated on the Huey and were exhausted, dehydrated and hypothermic.

The Huey took them to a waiting ambulance from Cody Regional Hospital. Deal refused treatment while Ostwald was transported to the hospital and eventually flown to the Idaho Falls Burn Center for treatment of severe frostbite.

“Most often search and rescue missions, similar to this one, do not have a positive outcome, so it was incredibly satisfying for our members to have such an emotionally rewarding end result,” Sheriff Scott Steward said. “And this was in no small part due to the volunteers who stepped up in a time of need. All of us should be grateful for their unselfish, giving attitude.”

The rescue began when, at 8 p.m. Thursday, the Park County Sheriff’s Dispatch received a report of two overdue snowmobilers in the Beartooth Mountains east of the Top of the World Store. The two men had begun snowmobiling at 8 a.m. that morning and had contacted a friend at 5 p.m. to say that one of their sleds had become disabled, but they were trying to get back to the highway on their own. No location was given. SAR was activated and deployed to the area on snowmobiles. They were assisted by members of the Cody Country Snowmobile Association and volunteers from Snow Search. They searched through the night, eventually suspending operations at 4 a.m.

At 4 p.m., a forensic trace on the victim’s last cellphone call, which had been requested earlier in the day by the Park County Homeland Security director, indicated that the call was made in an area south southwest of Fantan Lake. Searchers immediately began to comb that area when they discovered the abandoned snowmobile. Tracks from the sled indicated the men had gone south over a steep incline after abandoning the sled. However, given the terrain, weather conditions and nightfall approaching, SAR decided to suspend the search and return to formulate a plan for the following day.

At 6 a.m. Saturday, SAR once again deployed with all of their snow search equipment, along with all of the previous volunteers. Additionally, Homeland Security once again requested a helicopter from the Air Force Rescue Wing out of Malmstrom. Once the helicopter, a Bell UH-1 Iroquois (Huey), arrived on the scene, two SAR members boarded for an aerial survey of the victim’s expected route based on the terrain and prior day’s indicators.

From the air, they were able to pick up snowmobile tracks from Deal’s and Ostwald’s second snow machine, headed down a steep draw towards the bottom of the mountain. Eventually, the snowmobile tracks became human tracks, indicating the men had abandoned their second machine. At the same time, several members of the CCSA proceeded to the base of Table Mountain on snow machines to search that area.

After the aerial survey, the Huey landed east of the base of Table Mountain and dropped off the SAR members to return to Cody for fuel. As soon as the Huey departed the area, the ground teams heard Deal and Ostwald shouting for help from an area of spruce trees several hundred yards up the mountain. Snowmobilers’ immediately began the steep ascent, eventually reaching the victims.

Deal said they initially had gotten into a very steep area of heavy snow south of Fantan Lake and in trying to ascend, rolled one of their snowmobiles. Due to the deep snow and steep hillside, they could not get it upright and made the decision to abandon it.

They then took their second machine over the edge of an incline and followed a steep creek drainage in an attempt to reach the bottom of the mountain. The first night on the mountain, they were able to start a fire using gasoline from the snowmobile which Deal ignited with a sparkplug wire. They had no other way of starting a fire. They spent the night in a snow pit around the fire.

Friday morning Deal and Ostwald resumed their descent during which they struck a buried boulder, breaking the steering linkage. This forced them to abandon their second machine and proceed on foot. They spent Friday night without any means to build a fire, so they covered themselves with spruce branches. Upon waking up, they had no feeling in their lower extremities and consequently took two hours to traverse 100 yards.

Then the rescuers arrived.

Young and dumb a bad combination. Going snowmobiling with no emergency supplies. Remember Gilligan was only on a 3 hour tour.