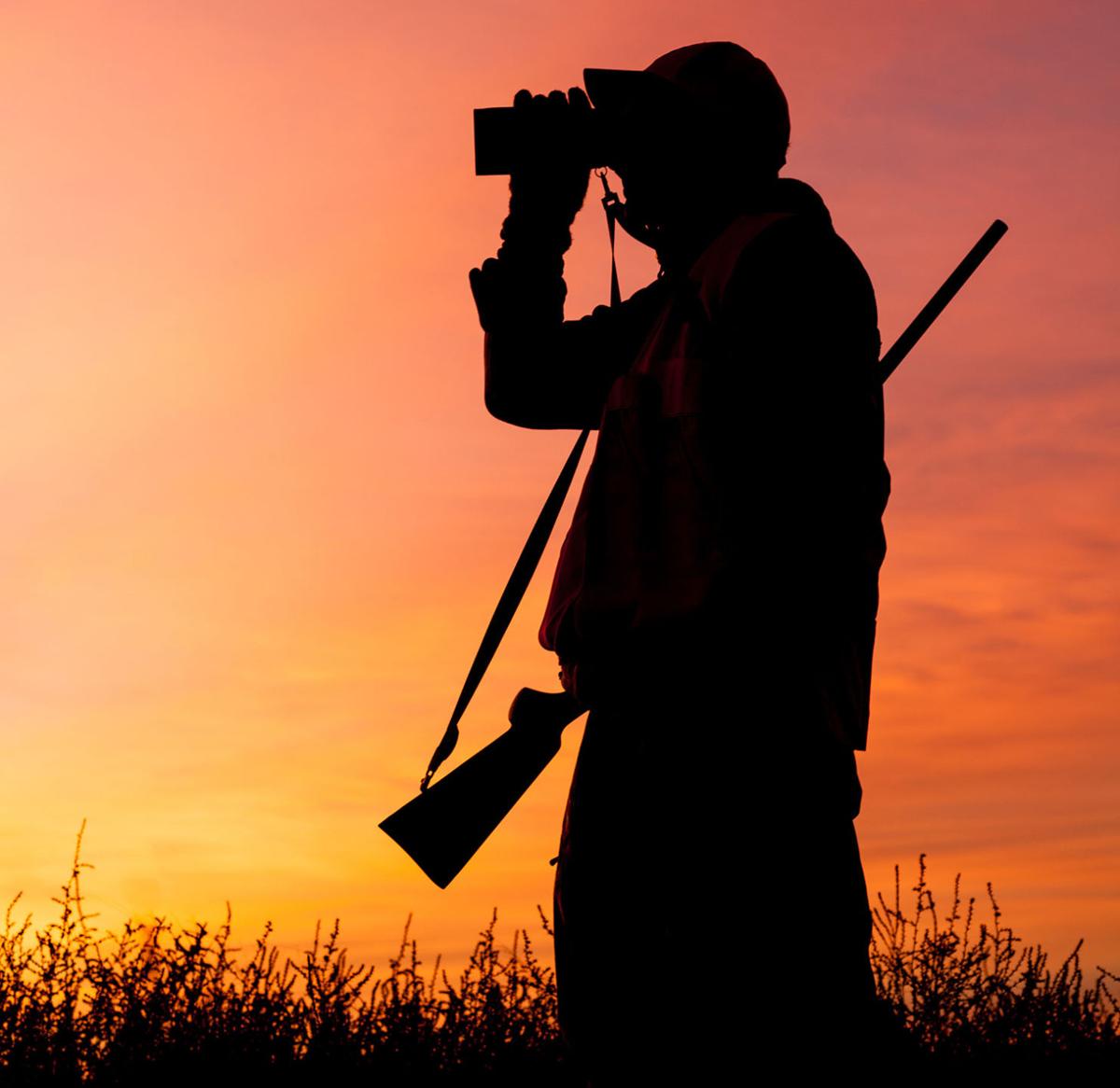 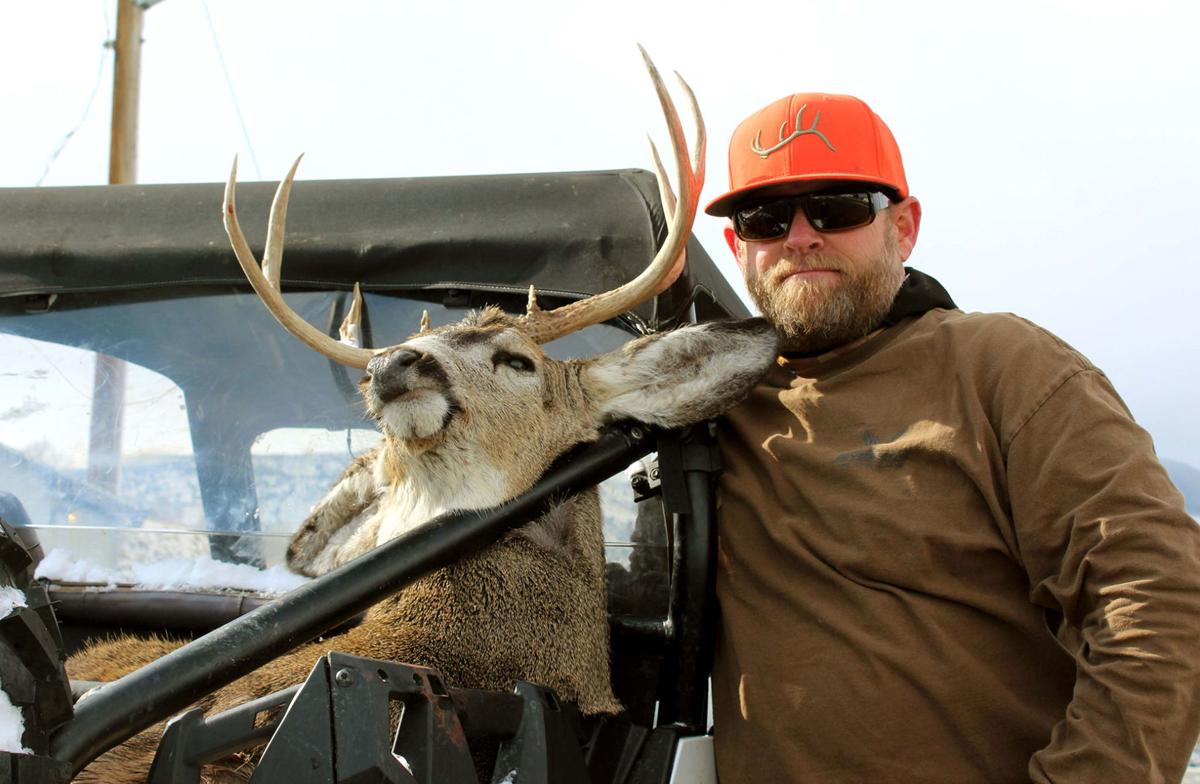 Jeff Harris, of Cody, shows off his mule deer buck he shot during the fall season. (Courtesy photo) 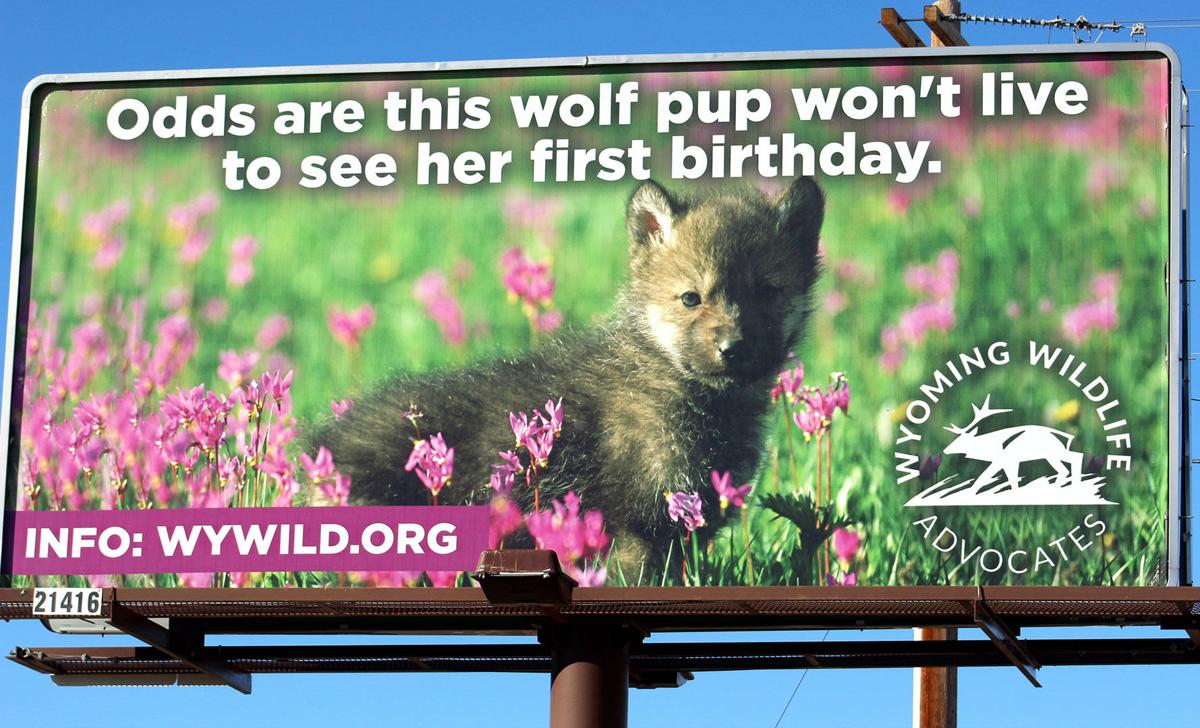 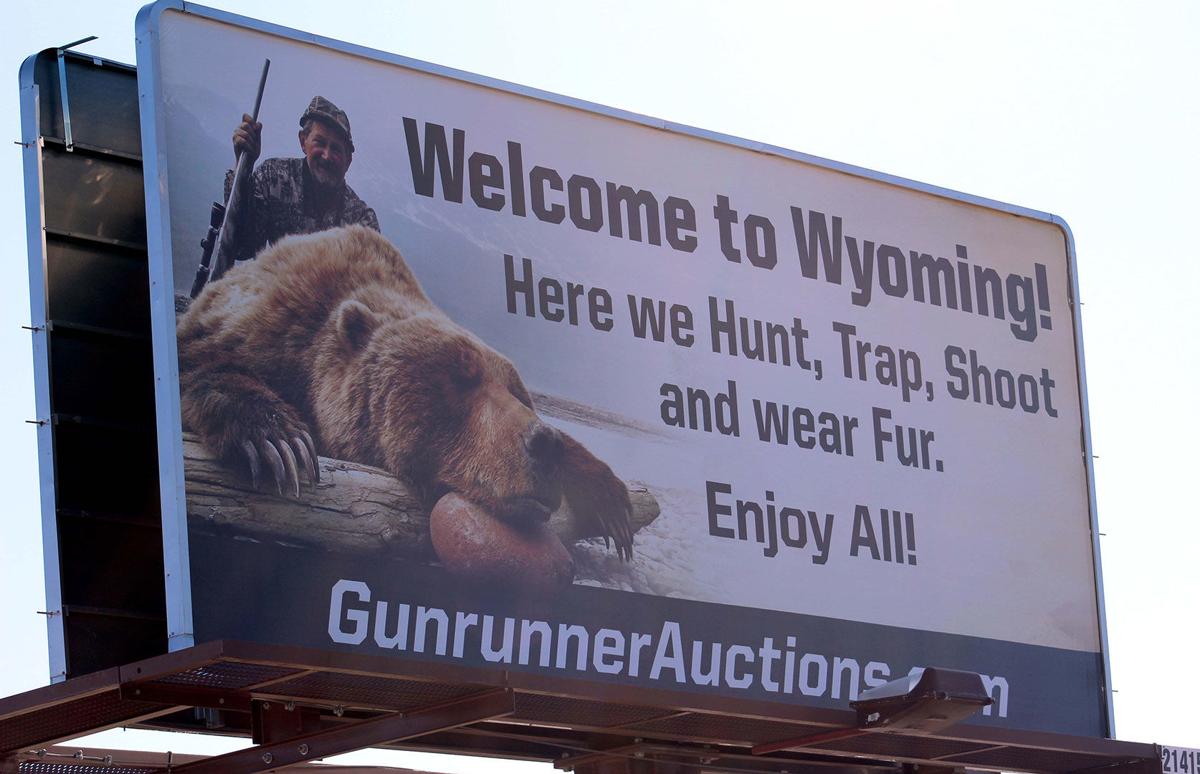 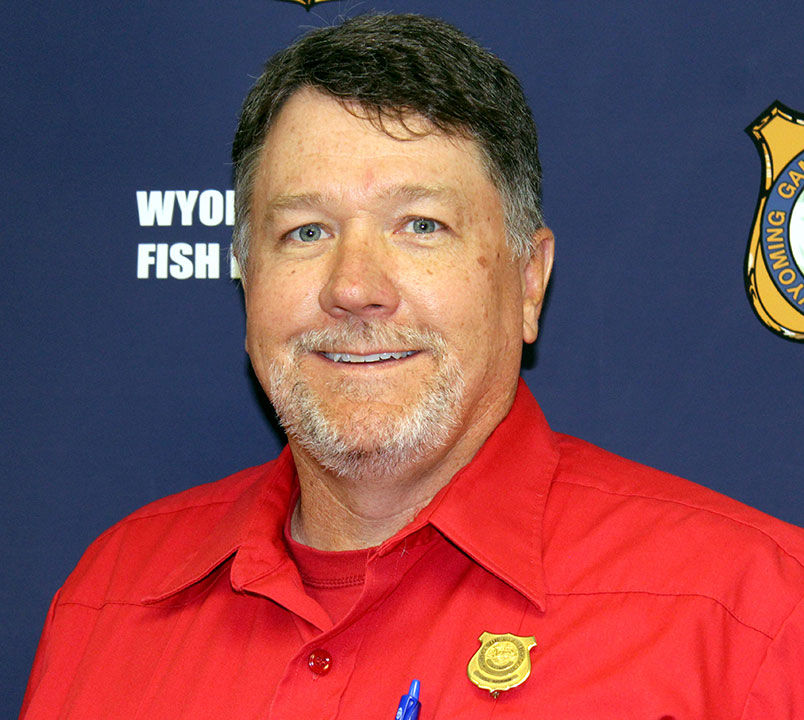 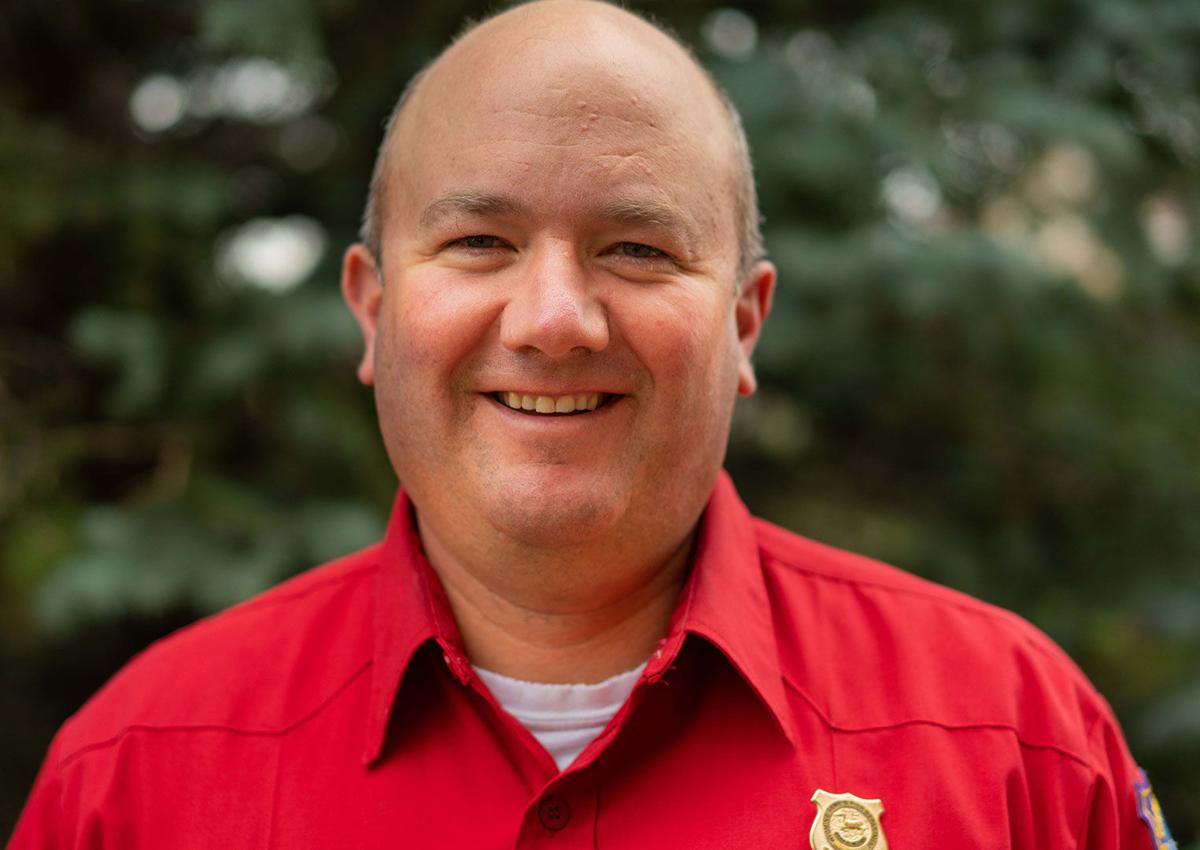 Jeff Harris, of Cody, shows off his mule deer buck he shot during the fall season. (Courtesy photo)

On the cold weekend morning in October, Jeff Harris rolled out of bed in the dark. He had deer meat for his freezer by midday just by driving a short distance into the hills.

Wyoming’s open spaces, rugged terrain, plentiful game and hunting tradition dating back more than a century, offer opportunity to leave Cody city life behind for adventure, and make the state one of the prime hunting destinations in the nation in the 21st century, just as it was in the late 19th century.

Hunters may have to work for their meat with boots on the ground, but they relish the entire outdoors experience.

On that day, Harris, 50, slid out the door quietly in the company of Bauer, his yellow Labrador retriever. Initially, walking backcountry ridges in the sunshine, he saw no four-point bucks, the legal requirement in the local hunt area and thought he might go home empty-handed.

“The search,” Harris said of the hunting process. “It’s so hard to find them. It is a surprise. Everything happens so quickly.”

It did this time.

“If he hadn’t stood up,” Harris said, “I never would have seen him. I had to shoot from my knees. He was getting ready to split on me.”

Brian Nesvik, 49, is director of Game and Fish and first hunted with his father at 11.

Most things about hunting in Wyoming are the same now as it has been during his lifetime, he said.

“I think what’s still the same is we still have a wildlife opportunity in Wyoming,” Nesvik said.

“The model for wildlife management is still essentially the same. You go and buy a license and that supports game management.”

Surveys show hunting participation nationwide has declined to about 11.7 million people in recent years. But the demand for licenses and tags in Wyoming remains strong, Nesvik said.

According to Game and Fish department statistics, 61,512 antelope licenses were sold in 2018, the most since 2012.

One indicator of Wyoming hunting popularity for out-of-staters was that more than half of antelope licenses sold last year went to nonresidents.

While not nearly so even a split on deer, 25,799 people not living in Wyoming purchased deer licenses. Likewise for elk licenses – most tags are reserved for residents, but 12,911 non-resident licenses were bought.

Nonresidents pay much more money to hunt Wyoming than residents.

The cost disparity is about 10-to-1 for antelope and deer, too. Visitors are willing to pay.

Economic benefits to the state from hunting, fishing, and wildlife viewing have been quantified in studies, most recently in a 2018 review by the University of Wyoming that used data available through 2016.

The information showed that $788 million was spent in the state that year for those activities with an overall impact of $1 billion on businesses.

“Hunting, fishing and wildlife are all good economic drivers for the state,” said David Taylor, a UW professor.

Big-game hunting direct spending for trips was totaled at nearly $127 million and for equipment the cost was nearly $80 million. More than $24 million was spent on hunting licenses.

In 2015, the Wyoming Outfitting and Guides Association performed a study showing a $303 million value to the state from hunting.

Cody’s Lee Livingston, a former president of the group, said that study showed 85 percent of guide fees were paid by non-residents.

“It is continuing along the heritage of early Cody,” he said. “Another reason is providing a service to people to enjoy their back country.”

Whether it is archery or rifle hunting, some form of elk hunting is available from mid-August to January, noted Cody regional office supervisor Dan Smith.

“We are lucky in Wyoming,” Smith said. “We have the opportunity almost all year to enjoy the resource.”

There is more flak in the atmosphere from those opposed to hunting in the 21st century than before, if only because of the existence of the internet.

Social media and group websites make it much easier for people to make opinions known.

There are degrees of opposition to hunting in American society. Some organizations want all hunting banned forever. Others are OK with traditional subsistence hunting to feed families, but oppose trophy hunting.

Perhaps the loudest anti-hunting group is People for the Ethical Treatment of Animals. PETA’s position can be summed up by a comment on its website reading, “Hunting is often called a sport as a way to pass off a cruel, needless killing spree as a socially acceptable, wholesome activity.”

The Humane Society of the United States is another group which opposes hunting. The HSUS has attacked several longstanding hunting policies in courts and helped fund voter initiatives in different states.

“I don’t think those folks make much of a difference in Wyoming,” Nesvik said, adding G&F decisions are definitely not determined because of what such groups say.

Minds may be changed elsewhere, or hunter decline can be attributed to other reasons. People have attributed it in part to households where there is no one to teach youngsters and video games dominating free time.

There’s the fact of more people going vegetarian or vegan in their diets. But probably less so in Wyoming, the heartbeat of the “Beef: It’s What’s For Dinner” culture, where the voices of Robert Mitchum and Sam Elliott still echo with that message.

Big Horn Avenue may be a battlefield in hunter-anti-hunter wars.

Currently, one billboard placed by local hunter and gun dealer Scott Weber features a hunter and an enormous grizzly, and the words, “Welcome To Wyoming. Here We Hunt, Trap, Shoot, And Wear Fur.” Behind it is another billboard, featuring a picture of a baby wolf and a message reading “Odds Are This Wolf Pup Won’t Live To See Her First Birthday.”

That space was hired by a group called Wyoming Wildlife Advocates in Wilson, near Jackson.

Executive director Kristin Combs said the group is not against hunting for food, but against the attitude of “let’s get the biggest one. We don’t have a problem with ethical, fair chase hunting. We’re not trying to wipe out hunting.”

“We’ve got to keep the pressure on those anti-hunters,” he said. “I think it’s an insult for those bunny lovers (to invade Cody). Go back and eat your tofu. This is real Wyoming.”

The very earliest hunters were men wielding clubs before shifting to bow and arrow, then firearms and it was not until guns came into play there was any threat to the longevity of select species.

In the U.S., sportsmen and scientists in the field sounded alarms to bring awareness to legislatures and the public.

European hunters gradually adopted hunting ethics, but the words “fair chase,” essentially defining those ethics, were introduced to the lexicon by the Boone and Crockett Club in 1888.

Before becoming president of the United States, Theodore Roosevelt proposed Boone & Crockett’s creation at the dinner table in his New York home.

Other outdoor luminaries of such as George Bird Grinnell and Aldo Leopold have been associated with the group which fundamentally urges ethical hunting in support of conservation.

The 2018 book, “The Fair Chase: The Epic Story of Hunting in America,” by Philip Dray, might be the most thorough examination of hunting history ever written.

One passage in Dray’s work reads: “One notable feature of the sport was its adherence to an evolving code of ethics that would eventually be known as fair chase, the idea that hunted animals must have a chance to evade or flee their pursuers and that they were to be taken only under certain rules and conditions.”

Wyoming calls those regulations. They cover season-setting, license purchasing, bag limits, legal shooting times. Much trust is involved and violators may be jailed or fined.

Illustrating how long hunting has been ingrained as sport in American consciousness are three enduring magazines, Sports Afield (1888), Field & Stream (1895) and Outdoor Life (1898).

“All hunters should be nature lovers,” Roosevelt said, adding an era of waste should be replaced by preservation.

In 1937, Nevada Sen. Key Pittman and Virginia Congressman Absalom Willis Robertson combined for legislation imposing an 11 percent tax on firearms and ammunition to spend on wildlife protection, conservation and management.

Pittman-Robertson Act revenue funds G&F programs. The money cannot be touched by other government entities. This is a cornerstone of the North American model Nesvik cites of how Game and Fish operates: sportsmen paying.

Many hunters give more than they have to. Wyoming Outdoorsmen grants supplement agency programs and others promoting hunting and fishing. Spending goes for many things, including bear spray, flashing deer highway signs, habitat irrigation and donating license costs to youth members and hunter education for unitiated young people.

“They’re our future,” said vice president Don Frame. “We get them started in the right direction.”

Nesvik is keen on veteran hunters tutoring young people and getting them into the field.

“Connecting new people, particularly kids, with the outdoors, is one of the most important things we can do for the future of wildlife conservation,” Nesvik said in a director’s message labeled “Inspire Someone To Hunt.” “Mentoring youth to enjoy nature promotes Wyoming’s outdoor heritage.”

One perpetuated this fall by Dawson George, 12, of Powell, on his first mule deer hunt. Dad and a guide led George on a long ridge hike where he made a 375-yard rifle shot, then said he definitely hoped the meat would be for that night’s dinner.

George was the personification of hunting’s future, a beginner youth seduced by Wyoming’s mountainous backcountry.