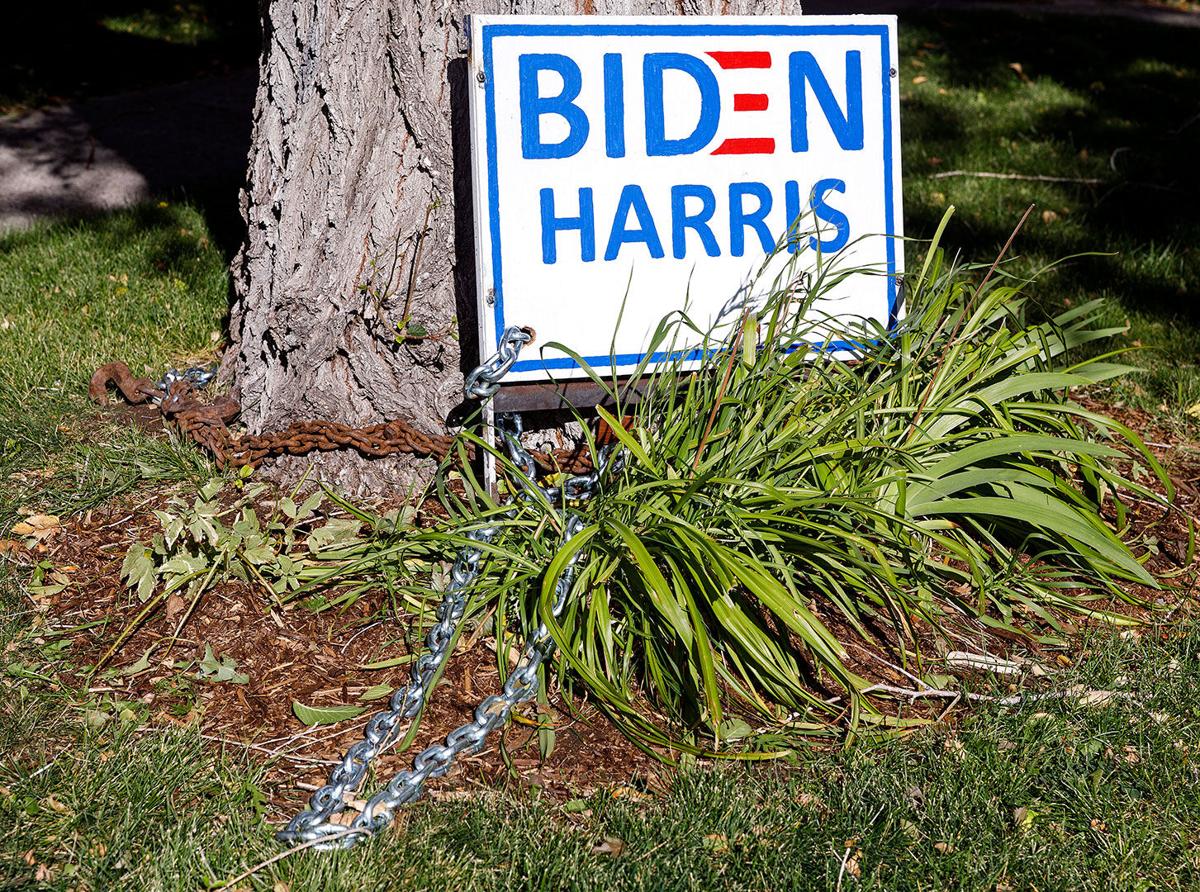 A Biden sign is chained to a tree on Rumsey Avenue after two before that were stolen. 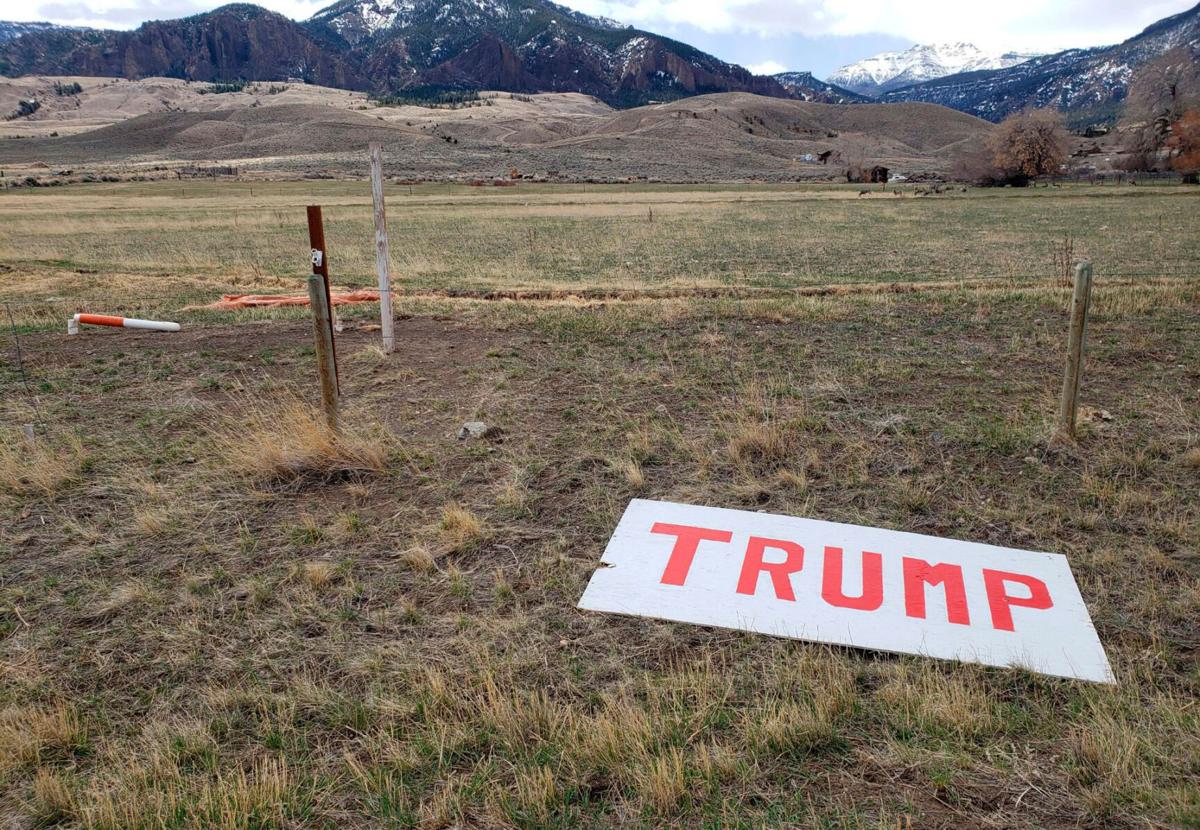 Tamara Young’s Trump sign on the North Fork has been vandalized multiple times since it was put up in 2016. (Courtesy photo)

A Biden sign is chained to a tree on Rumsey Avenue after two before that were stolen.

Tamara Young’s Trump sign on the North Fork has been vandalized multiple times since it was put up in 2016. (Courtesy photo)

Wapiti rancher Tamara Young got creative when repainting her sign after it was repeatedly defaced.

After one incident, she turned the NO spray-painted above TRUMP to VOTE.

Mickey Waddell of Powell said she doesn’t know of anyone in her town or in Cody who can display a Biden yard sign without its being stolen unless it’s inside a window.

People on both sides of the aisle can speak to seeing Biden or Trump signs defaced or stolen this year. While some have been reported to law enforcement, Cody Police Chief Chuck Baker said he expected there were many more.

He said the department has received reports of five cases of political signs being stolen, including three Biden signs and two Trump signs. In the latest incident last week in Cody, a man on Rumsey Avenue said his Biden sign he had chained to his tree was stolen after someone used a bolt-cutter.

“We do traditionally get several reports of stolen or damaged political signs every election cycle,” Baker said. “My guess is, there may be other unreported cases of damaged or stolen political signs from front yards, businesses and other private properties.”

Young’s homemade sign beside the North Fork Highway has been up since President Donald Trump was elected in 2016. She said most of the issues with her sign occurred in the winter and spring. Some of the incidents appeared random, and she figured they were tourists driving up to Yellowstone. However, some of the graffiti was done in the same handwriting, leading her to suspect someone in the area.

To get to the sign, people have to jump a fence along the highway.

“The biggest thing is it upsets me that I can’t express my view,” she said. “There’s a Democrat sign the next property over. I have plenty of friends and neighbors that complain about that, but it has never been touched. They have every right to say whatever they want.”

And Young said the sign is generally met with honks and excitement from people driving by when she and her husband are out in the field working. Still, she’ll take it down when this election is over.

“Everybody just needs to calm down a bit with politics,” she said. “It’s important, but it shouldn’t make people hate each other.”

Waddell said she was in the back when someone came to her front door in the daytime to snatch her political signs.

“The ‘Make Racism Wrong Again’ sign was stolen at the same time. For the life of me, I can’t figure out how that would be offensive,” she said, adding she also avoids putting a bumper sticker on her car as it’s her only vehicle.

Park County Democrats chair Kelly Tamblyn said she has received many requests from county residents for new signs after having their’s taken.

Carol Armstrong has a stash of extra Trump signs and bumper stickers for the same reason – in 2016 her house was egged and car damaged when she has dozens of Trump signs in her Cody yard.

This year she has had to replace one Trump sign and one bumper sticker after both were stolen a few weeks ago.

“I won’t be bullied and I won’t be deterred,” she said. “It’s an attack against our freedom and our rights.”

Baker said he understands people who support candidates and issues want their signs prominently displayed, but the department recommends residential signs be placed closer to your house and brought in at night.

“Other options may be to place your sign in a front-facing window or other location not easily accessible to a passerby,” he said. “We have also seen an increase in residents installing surveillance cameras to monitor their signs. If someone is caught stealing a political sign, they could be charged with misdemeanor theft.

“These unscrupulous individuals cannot steal your vote or change your support for a candidate.”

Theft is theft, regardless of who does it. Wrong is wrong, and the theft of anyone's property is reprehensible. Now, no one likes to lose personal property, but it is a feeling we should all get used to if the Far Left sweep the election. How anyone can fail to understand that, is a mystery to me.