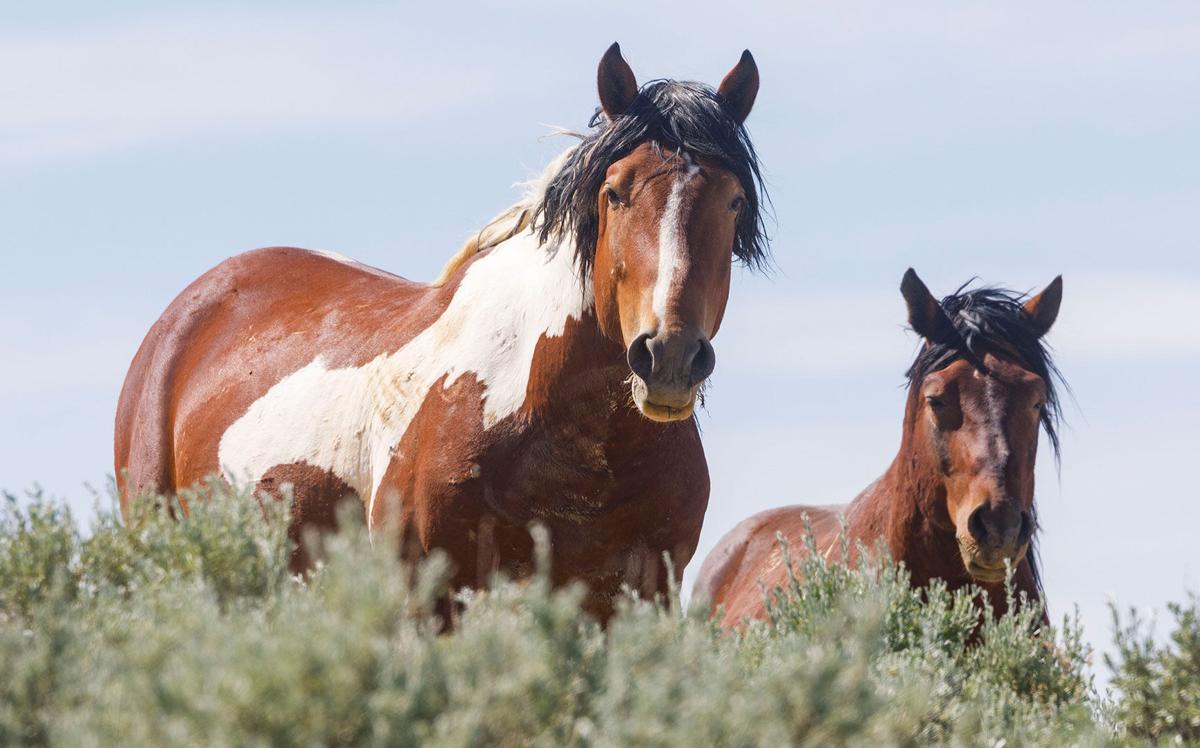 Two wild horses stop on a hill in the McCullough Peaks area. Unlike many wild horses, the local herd is allowed to roam freely on BLM land. 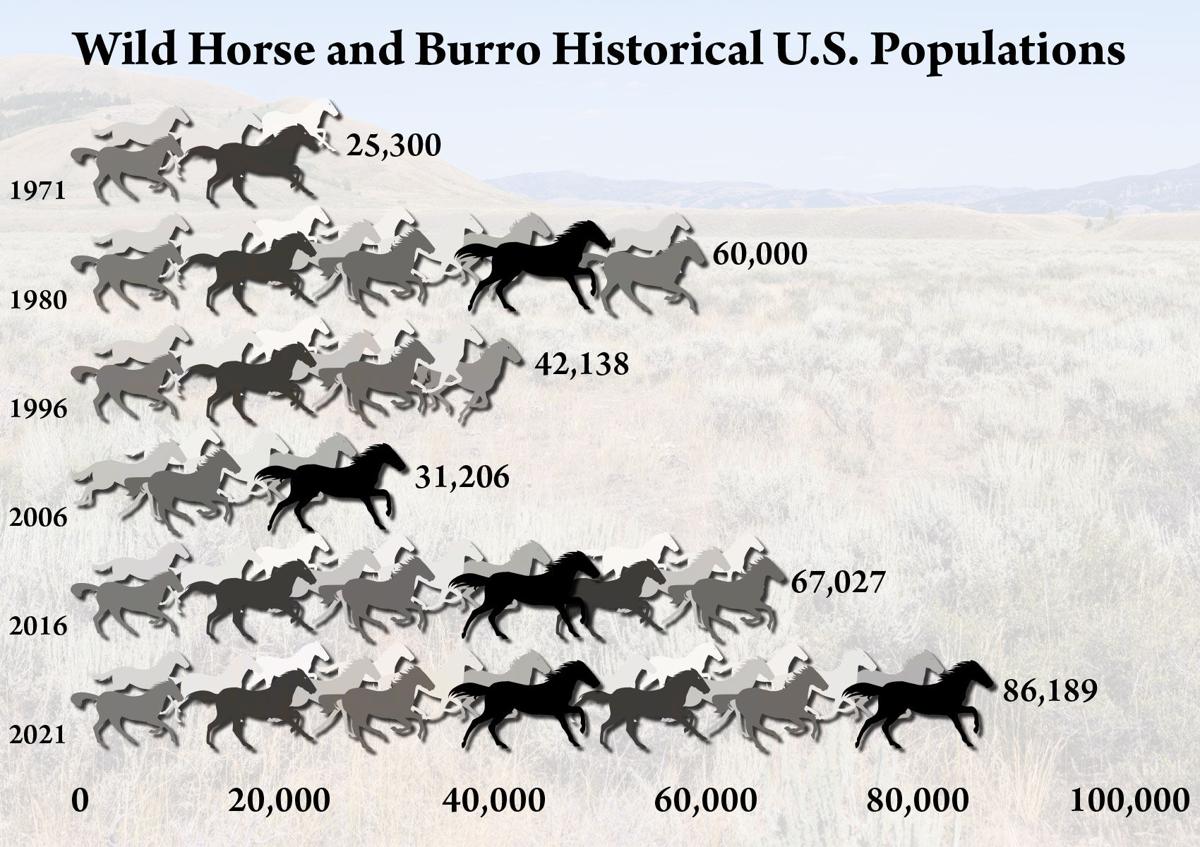 Two wild horses stop on a hill in the McCullough Peaks area. Unlike many wild horses, the local herd is allowed to roam freely on BLM land.

(Editor’s note: Part 1 of a two-part series on the current issues regarding wild horses and management practices)

Ada Inbody will often drive out to the McCollough Peaks with her dogs just to watch the wild horse herd. Since her days growing up on a farm in rural Oklahoma, she has been riding horses, but wild horses for her have always garnered special attention, sometimes keeping her up late in the night thinking about the equine.

“I just think they’ve been given a raw deal,” she said. “They are my life.”

There are few topics locally that draw as much passion and contention as the subject of wild horses.

These animals mean many different things to many people. To their fans, the horses represent a symbol of the West and the American spirit. To their opponents, they are more of a nuisance to the landscape and harmed by the BLM management and federal oversight they receive.

A recent Natural Resources Management Plan unveiled by the Park County commissioners showed the divide between ranchers and those advocating for protection of the horses as a wild species. The federal government controls the reigns on how the horses are managed, a situation which leads to frustration on both sides.

The BLM’s Wild Horse and Burro Program came forth from the Wild-Free Roaming Horses and Burros Act passed by Congress in 1971. The law identified wild horses and burros as “living symbols of the historic and pioneer spirit of the West” and assigned the BLM and the U.S. Forest Service the responsibility of managing and protecting herds in areas where wild horses and burros were found roaming in 1971.

“The worst thing that ever happened was having the government involved in the management,” Park County Commissioner Chairman Lee Livingston said.

Livingston, also an outfitter, has worked with horses nearly his entire life.

“Nobody respects them more than I do,” he said.

In May, President Joe Biden’s administration proposed a $35 million increase to the Wild Horse and Burro Management program annual budget, which if approved would reach $140 million. The administration also plans to continue former President Donald Trump’s roundup plan to remove 90,000 wild horses and burros from public lands over the next five years at a cost of nearly $1 billion, a proposal that drew harsh criticism from wild horse advocacy groups who see the roundups as the BLM prioritizing livestock grazing.

Others oppose it for different reasons.

“It’s costing the taxpayers millions of dollars and could have been taken care of the way it was being taken care of years ago,” Livingston said.

Livingston said the quality and health of local herds was much better under the purview of local ranchers and cowboys, who he said would adopt animals in the winter possessing “better qualities,” with other equines determined to have bad genetics sent to slaughter houses.

Growing up working at Glen Fales’ ranch, Livingston said some of the best horses there were from the wild.

“We had good stock, we don’t have that anymore,” he said.

Inbody said nearly any wild horse has the potential to be trained.

“It’s amazing what a good horse trainer can do with those horses,” she said.

Numerous instances of successful wild horse adoptions have occurred where the horses were able to be utilized for various tasks and compete in shows and rodeos. Inbody said she knew of one adopter who was able to re-sell a horse at a very steep price after training them for rodeo roping.

“When they say it’s a jughead mustang, they should put the jughead on the guy that’s trying to train him,” Inbody said with a chuckle.

In 1934, with the passing of the Taylor Grazing Act, the government became responsible for managing grazing on public lands. At this time it was estimated 50,000-150,000 wild horses existed. According to the BLM, the population of wild horses on public lands had declined significantly prior to the law because of the encroachment of man and the impact of mustangers.

By 1971, there were just 17,300 wild mustangs remaining according to the American Museum of Natural History, after around 2 million existed in 1900. The BLM has stated the ideal number of wild horses and burros federal rangelands can sustain without causing damage to vegetation, soils and other resources is 26,960.

In March, the BLM estimated the current number of wild horses and burros at 86,189, more than three times the ideal quota. It was the first year the population had declined in nine years.

“A bunch of people got together and thought that it would be a feel-good thing,” Livingston said. “They are thinking they are rescuing the horses but they’re putting them in feedlots.

“This is no place for wild horses.”

“The federal government is spending millions of dollars on feedlots,” Livingston said. “There’s better ways to spend that money.”

“It’s very hard to find someone who wants to adopt a 10-year old mare,” he said.

Inbody said with the proper fertility control and management of the wild horse and burro adoption program, these species will receive the management they deserve.

She said the BLM could be a “little more attentive” to managing grazing permits in the McCullough Peaks in regards to making sure the permitted amount of cows are on the land and they are off the land when they are supposed to be. She said too many cows can contaminate drinking reservoirs with their fecal matter.

Many supporters of the local herd have said these horses are the descendants of horses brought over by Spanish settlers, evidenced by some of the markings.

“That is certainly our belief that they’re wild horses,” said Mary Scuffham, president of local wild horse advocacy group Friends of a Legacy.

Livingston doesn’t see it this way.

“They’re a feral animal leftover from the big ranches,” he said.

North America hosted prehistoric horses for millions of years and it was here that they originated, but according to the late Dr. Jay Kirkpatrick, former director of the Science and Conservation Center at ZooMontana in Billings, the last of these horses died out here between 13,000 and 11,000 years ago at the end of the most recent ice age. By that point, horses had already migrated to Asia, Europe and Africa, so the species never went extinct, and some arguments have even been made that the horse never went extinct in North America at all.

“Scientific evidence of Equus remains and fossils were found at archaeological sites throughout North America outside of the periods accepted by Western science for the horse and up until recent Pre-Columbian historial times,” Dr. Yvette Running Horse Collin wrote in “The Relationship Between the Indigenous Peoples of the Americas and the Horse: Deconstructing a Eurocentric Myth.

By the early 16th century, horses were unequivocally reappearing in North America by way of European settlers. According to FOAL, some of their horses escaped and subsequently populated the Great Plains, becoming mustangs.

At a July commissioners meeting, debate ensued about whether to describe the McCullough Peaks herd as “wild” or “feral” horses. The word feral was used to describe the horses in their draft Natural Resource Management Plan.

The commissioners recently released their final draft of the NRMP where they continued to refer to the horses as feral.

“Park County defines feral as domesticated animals that have been reintroduced to the wild,” the plan said. “Most wild/feral horses and burros living today are descendants of animals that were released or escaped from Spanish explorers, ranchers, miners, the United States Cavalry, and Native Americans.”

The final NRMP criticizes the BLM’s management of the wild horses and burros and mentions the “strain” they cause to the land, but also credited the efforts being taken by FOAL.

According to Equinews, horses consume 16-32 pounds of pasture per day. Cows on the other hand, consume 24-36 pounds, according to Glenn Selk, an Oklahoma State University animal scientist.

“I think there’s enough food out there for everybody,” said Scuffham.

Cows, unlike horses, are ruminants, and have very effective digestion systems capable of fermentation, which breaks-down and digests a greater percentage of grass and plant seeds. Horses have comparatively worse digestive systems and as a result, most of the grass and plant seeds they eat are deposited back onto the range intact and ready to grow.

The NRMP document will be voted on for final approval at their Sept. 20 meeting, but the county website already referred to this document as being approved.