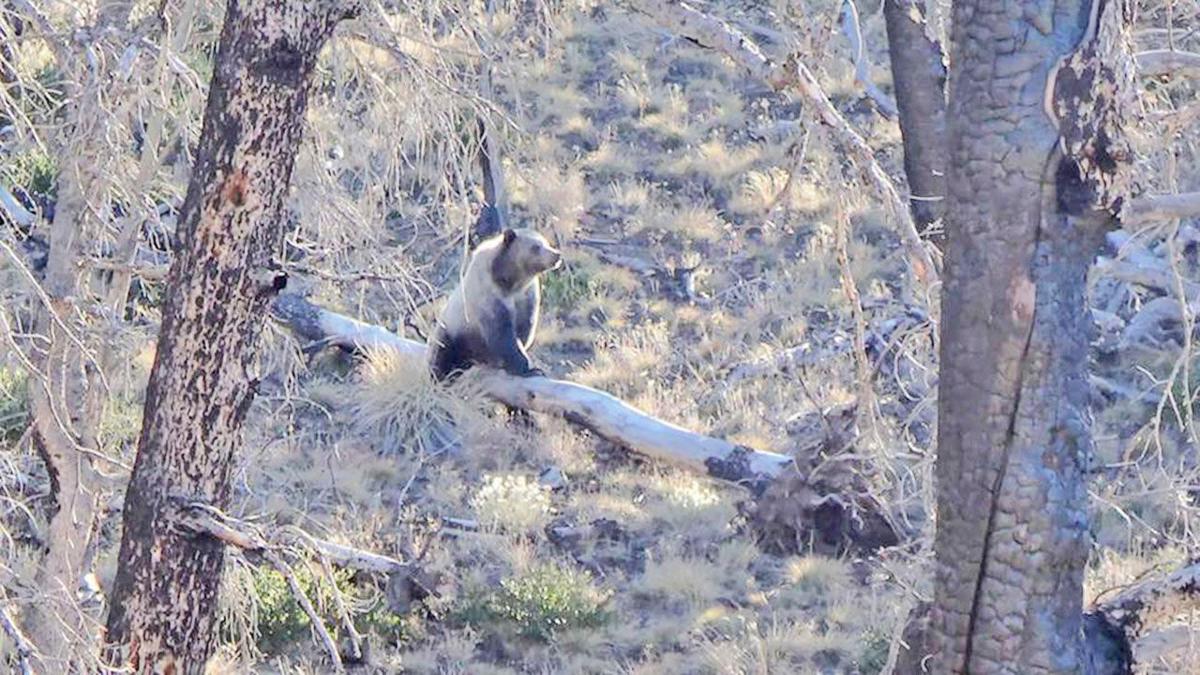 While a group was reviewing the area of a bear encounter, a different grizzly prepped to charge them because it had claimed part of an elk carcass left behind the previous day. (Courtesy photo) 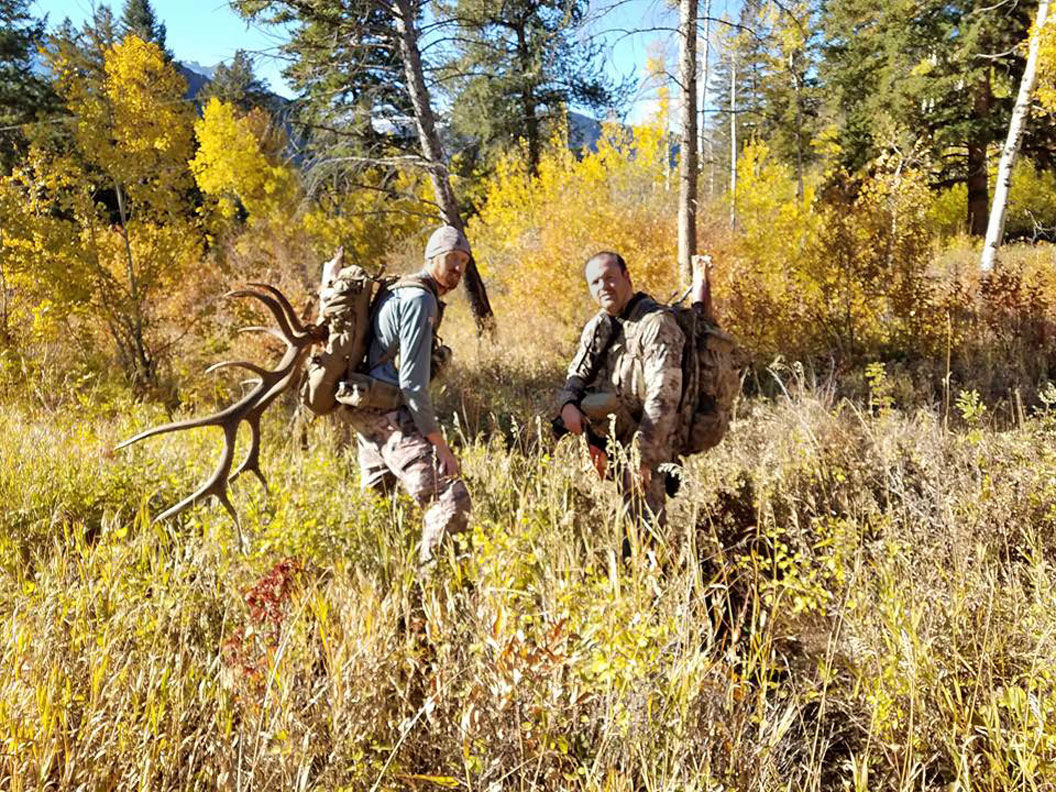 Tev Kelley (left) and Scott Smith were dressing an elk when they were charged by a grizzly on Oct. 6. (Courtesy photo)

While a group was reviewing the area of a bear encounter, a different grizzly prepped to charge them because it had claimed part of an elk carcass left behind the previous day. (Courtesy photo)

Tev Kelley (left) and Scott Smith were dressing an elk when they were charged by a grizzly on Oct. 6. (Courtesy photo)

The grizzly bear menacing Tev Kelley and his hunting partner on the North Fork did not respond to reason when a warning shot was fired into a nearby log.

So Kelley shot it.

“I thought it was dead,” the Cody guide said.

Under the extreme pressure of a charge with about two seconds to react, Kelley thought only of survival when he yanked out the .45 handgun he wore on his hip and pulled the trigger.

He did not even know where the shot hit the grizzly, in the head, face or neck, but it bled as it fell to the ground, rolled downhill and lay still.

About 10 seconds later, the bear climbed to its feet, staggered in a semi-circle as if a drunk after last call and fled the scene as the men exhaled.

This eye blink of an incident occurred midday on Oct. 6 in rugged hunting territory in the hills while Kelley and Scott Smith were field dressing the elk Smith shot.

They were preoccupied with their work as the sub-adult, 400-pound grizzly sneaked up from behind and nearly took them out in a charge.

“We were bent over and one or two seconds later he would have gotten on both of us,” Kelley said.

But Smith heard the breaking of a twig, turned his head, then yelled, “Bear, bear, bear!”

The shouting and the men moving apart, he believes, may have confused the bear.

“I think that’s why it hesitated,” said Smith, before resuming its charge. “That is definitely the closest call I’ve ever had with a bear that aggressive.”

Kelley paints a picture of a bear in position to make an NFL-style block, taking out two guys on one play. This was not football, however, but life and death with some unexpected fallout.

The first is that the wounded bear wandered away and has not been tracked down by Game and Fish.

“It makes me sad there’s a wounded bear out there,” Kelley said.

The second was a prompt field investigation by G&F personnel out of the Cody office the next day.

Kelley and Smith, also from Cody, returned to the site with Ned Kelley, Tev’s father, game warden Travis Crane and biologist Luke Ellsbury. While reviewing the area that group was charged by a different grizzly.

“It wasn’t really warning shots,” Ellsbury said of firing twice. “It was just to put some distance between us. That bear was pretty bold. I was trying to scare it.”

Bear encounters are not rare in the outskirts of Cody at this time of year during the hunting season.

Kelley, 32, is a longtime hunter and said he has been charged by bears many times, though the confrontations were not this dramatic.

“I was charged twice last year on the same day,” Kelley said. “And once the year before.

“I have run into a bear at less than 100 yards a dozen times. I love bears. They’re fascinating animals.”

They are less enchanting if they decide they want to kill you.

Kelley said he chooses to carry his handgun into the woods rather than bear spray, in addition to hunting rifles, because he does not believe bear spray can protect in all situations. This time he is sure bear spray would not have deterred the bear in time, particularly since it was quite windy.

“It’s my personal choice,” Kelley said. “A handgun works in every situation.”

Kelley and Smith were after an elk for Smith, 34, who drew a tag “and he tagged along with me,” he said of Kelley.

They saw a good-size elk that Friday after their search began early in the morning.

Stalking the elk was a challenge as it retreated into rocky terrain with very narrow hiking areas and the wind howled at what felt like 80 mph.

Even though the wind made it difficult to stand straight up, the advantage for the men was it killed their scent, providing a better chance to advance undetected.

When they got within range, Smith made a 327-yard perfect kill shot behind the elk’s right shoulder.

Before carving, Kelley moved the duo’s packs and rifles a slight distance uphill, “so they wouldn’t get bloody.”

That could have been a fatal choice. The elk was too large for the hunters to haul out all of the meat in one hike. They planned to use a rope and pulley system to raise the meat they could not carry onto a high tree branch out of the reach of bears.

They went to work on the dead elk. When Smith turned in response to the noise, the grizzly had cleared a log about 20 yards away and was coming fast before halting.

The hunters were backed into a corner, against a rock ledge.

“We had nowhere to go,” Smith said. “We really didn’t have an exit. The bear was right in the way.”

Kelley said this bear had clearly targeted them because from whatever direction it approached it could see 200 yards.

“It’s not like this bear just bumped into us,” Kelley said.

Kelley drew his pistol and fired the warning shot. The bear seemed indifferent.

“He came charging in with no hesitation,” Kelley said. “This bear was like a freight train.”

Kelley’s next shot at close range hit the bear high and drew blood. Smith thinks the bullet may have struck the jaw.

“Then it went down hard,” Kelley said. “We ran for our rifles.

After his initial analysis of the bear being dead was proven wrong and it rose to its feet downhill, Kelley was convinced it was going to attack them again.

“This bear was not afraid of humans,” he said.

Once revived, the bear, which Kelley described “as chubby as can be, very fat,” ran away.

“He got up, crashing and falling. He was no longer a threat.”

Aware of the permissible conditions to kill a bear as defense of life and property, Kelley and Smith believed it was not legal to shoot this bear again.

“I’ve heard of hunters who had legal problems,” Smith said. “Once the threat’s gone, I can’t shoot it again.”

They loaded up as much meat as they could carry, both estimating their packs weighing 100 pounds each, and trod to the vehicle, still watchful for the wounded bear.

Although Smith weighs 220 pounds, Kelley weighs around 150 pounds despite standing 6-foot-4, so lugging that much weight was hard work.

The grizzly departed the scene, but in a direction between the men and their truck. Kelley and Smith were hasty in departing, wishing to avoid a repeat confrontation, so they placed the leftover meat in the rocky area where it was partially hidden.

They reached the vehicle at 5 p.m. and as soon as they connected with the highway in Wapiti stopped to call G&F.

Later that night, Crane went to Kelley’s house and interviewed him about the events.

The next day, the five-man group, the hunters, Kelley’s dad, and the G&F personnel, retraced Kelley and Smith’s hike-in route. There was bear sign everywhere, from more than one bear.

“We were yelling the whole way in,” Kelley said of the common practice in bear country.

When they reached where the meat had been deposited, it was not there. It had been claimed and buried nearby by a bear. The original bear was blondish, and if still alive would have exhibited signs of its wound. Although about the same size, this was another bear, darker brown, and not happy to see intruders on its food stash. It was prepping to charge them.

“For them it’s life and death,” Ellsbury said of fall food gathering.

As bears bulk up for winter hiberation – a couple of weeks away – Ellsbury said, they need every food source they can find.

“That bear definitely claimed that,” Ellsbury said of the remaining elk. “They get to guarding those calories pretty hard.”

The bear sniffing around made the men skittish and they hustled through their tasks.

G&F does not keep a record of bear charges, Ellsbury said, but they are most common in autumn as bears prepare to den and hunters flood the field.

“I think it does happen fairly regularly in this fall period,” he said.

G&F continues to search for the bear Kelley shot, but has not discovered it, Ellsbury said.

Despite his long experience in the backcountry and previous bear encounters, once the situation calmed, and Kelley and Smith were retreating to the truck, Kelley said, “My hands were finally shaking.”

Kelley said there was a reason video made after the incident and pictures his father took were posted on Facebook.

“I wanted to raise awareness,” he said, “to tell people to be careful. ‘This really does happen.’”

Kelley may have been rattled by his close-encounter charge, but it wasn’t going to keep him indoors. A couple of days later he was in the field again guiding another hunter near Douglas.