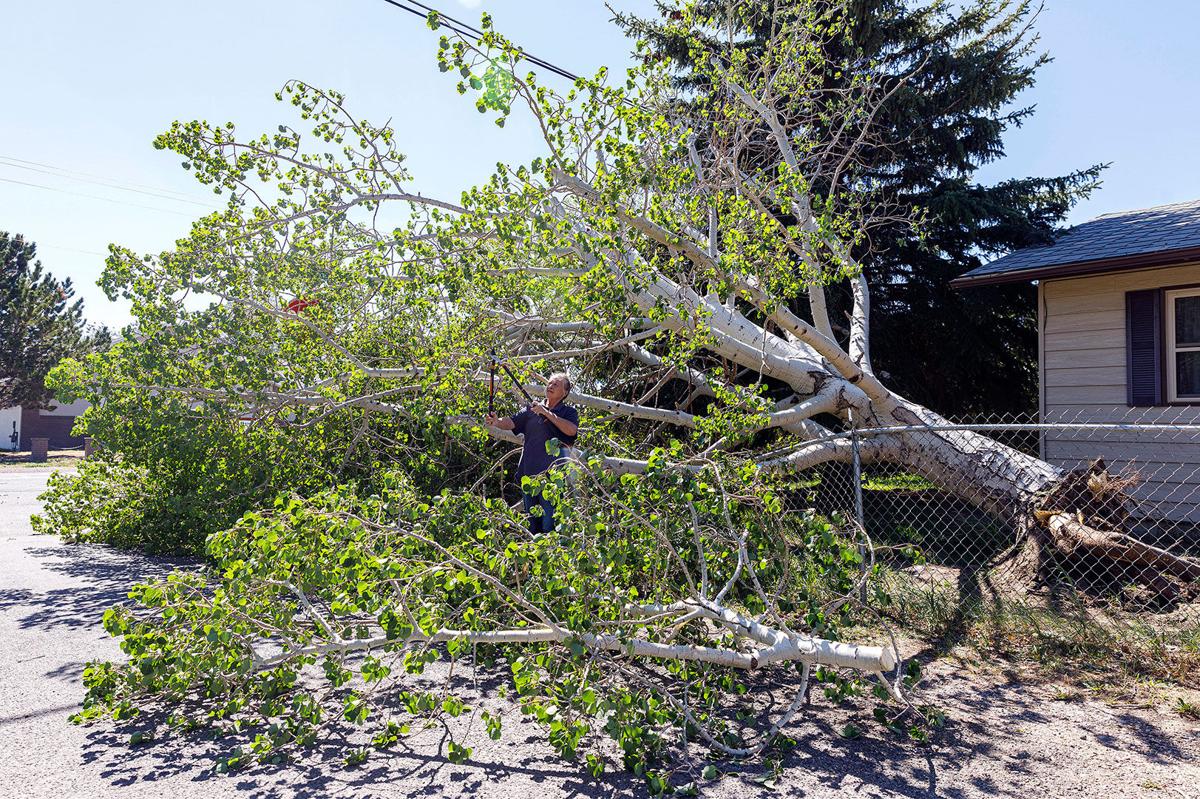 Catherine Harris Walker trims branches off an aspen tree in her front yard Friday after it was uprooted during the high winds on Thursday. 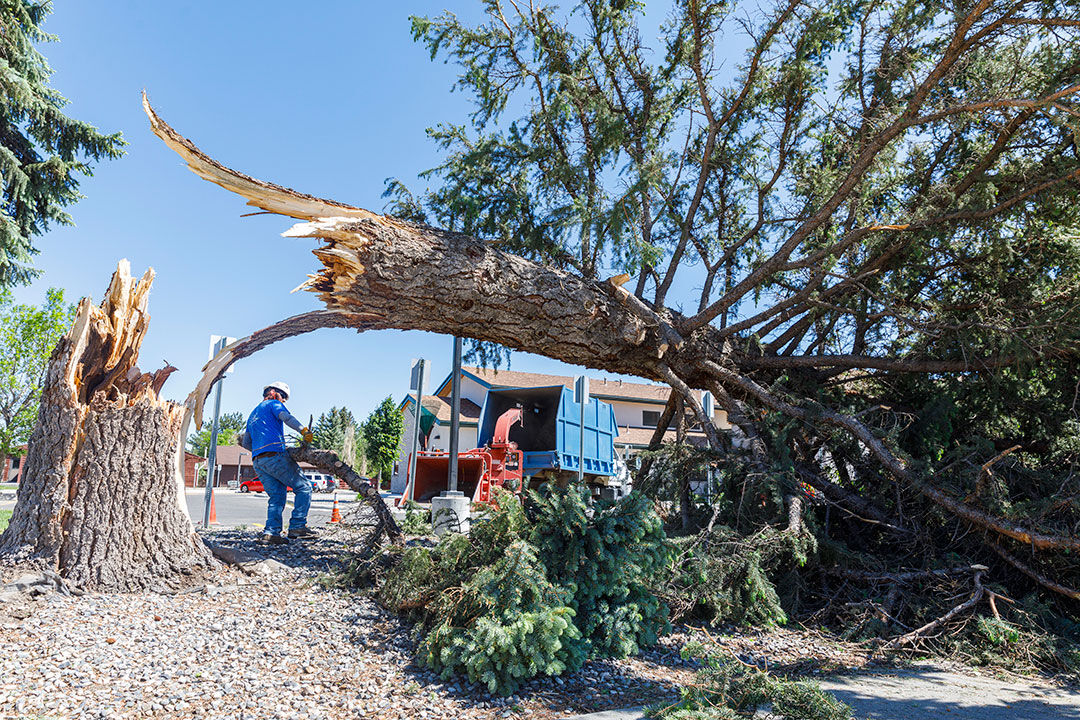 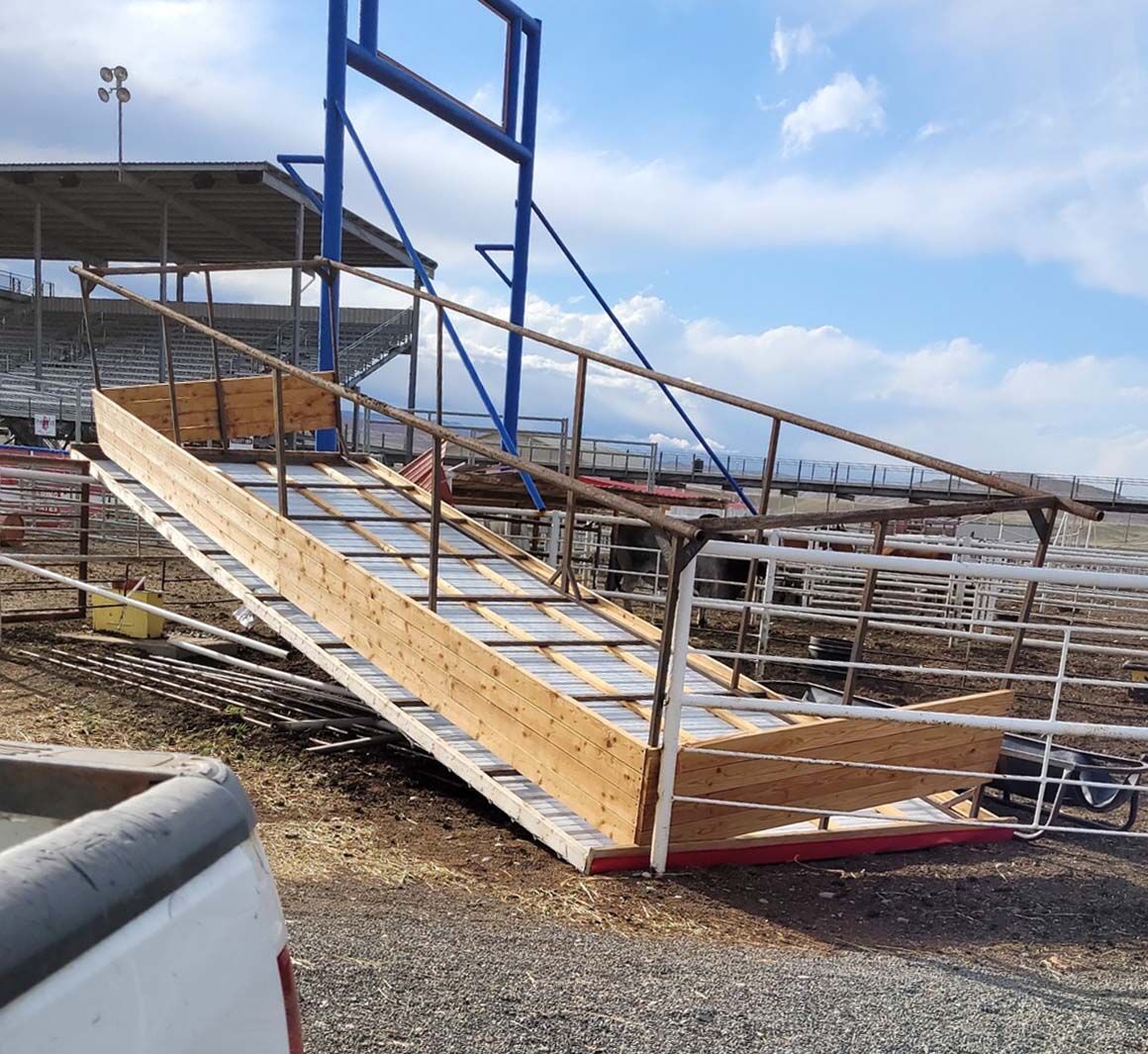 A shed for calves at the Cody Nite Rodeo was picked up by high winds Thursday and flipped out of the pin where it was located, also damaging the fence. (Courtesy photo)

Catherine Harris Walker trims branches off an aspen tree in her front yard Friday after it was uprooted during the high winds on Thursday.

A shed for calves at the Cody Nite Rodeo was picked up by high winds Thursday and flipped out of the pin where it was located, also damaging the fence. (Courtesy photo)

The National Weather Service in Riverton reported winds were highest just south of the airport, although gusts were recorded in the 50s and 60s across the region.

“It is highly unusual to have these high winds this time of year,” said meteorologist Bill Murrell with the NWS in Riverton. “Hitting these winds in June is pretty phenomenal.”

A large pine tree on Sheridan Avenue outside the Big Horn Basin Cancer Center snapped and fell over, and all town side streets and dumpsters were overflowing with downed branches.

That night, a few groups of people were driving around clearing branches from the roads. One tree caught near Stampede Avenue caught fire after coming in contact with a power line.

Catherine Harris Walker said a large aspen she had planted in 1984 at her house on Baker Street toppled over while she was at work and landed on power lines.

“It means so much to me, my tree, in a second it was down,” she said. “People said they had never seen such a huge tree. It meant a lot to us. I never dreamed it’d fall.”

Just a block down the road on 29th Street, a large branch came down off Janette Jankauskas’ more than 70-year-old tree. Her house is located in close proximity to the tree, but luckily, the branch fell into her yard.

“I always pray for no death or destruction to me or my neighbors,” she said. “It could’ve been so much – I’m very blessed.”

Outside of town, Wyoming Highway Patrol Lt. Lee Pence said six trucks blew over in the high winds, including four on WYO 120 S and one on WYO 120 N.

He said the crosswinds were fairly steady above 60 mph where a truck and fifth wheel blew over on WYO 296.

“None of them had serious injuries, but (they) kept emergency crews busy,” Pence said.

One Cody resident posted a video on social media of trees being anchored to his truck to keep them from being torn out of the ground.

Even the rodeo was canceled Thursday night due to the wind. Stock contractor Maury Tate said it was the first time they’d canceled due to winds since he took over 17 year ago.

“We’ve canceled because of rain or snow but never wind,” he said. “It was wild. When the wind is blowing like that it’s hard to even open the bucking chutes.”

The winds also picked up a shed for calves at Stampede Park and blew it out of the pen, damaging it and the fence it landed on.

Power was down across many areas of town, although crews were able to restore it quickly to a number of residents’ homes, many of whom were thanking the city crews on social media for the quick response.

Jack Tatum, director of Park County Homeland Security, advised residents to examine trees and branches for breaks that might not have caused them to fall to the ground.

“Branches often get hung up and decide to come down later,” he said in a Facebook post. “As cleanup in the aftermath of yesterday’s storm begins, be sure to look up and thoroughly survey the trees for any hazards before going under them. As always, stay vigilant and stay safe.”

(Amber Peabody and Leo Wolfson contributed to this report)