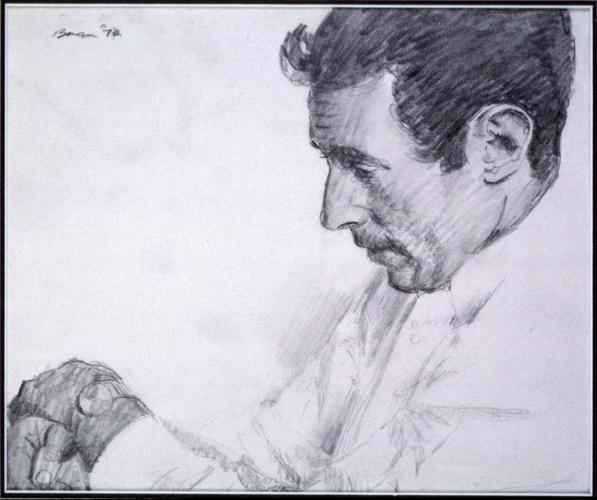 James Bama sketched his “Self-Portrait,” in 1972 with a pencil on tissue paper. (Courtesy of Buffalo Bill Center of the West. Gift of Herbert G. Houze) 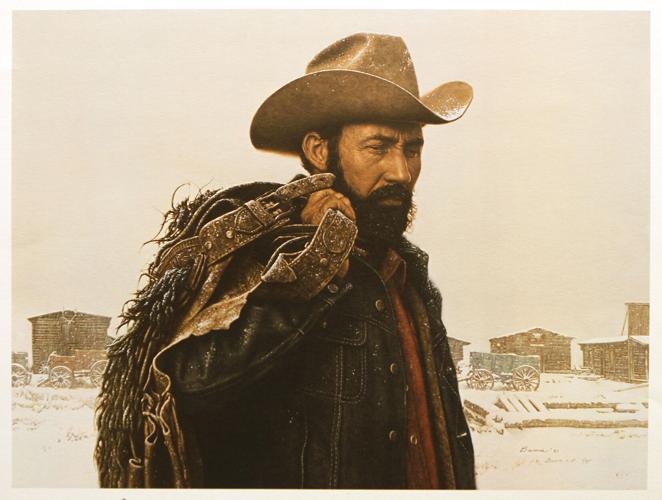 James Bama’s painting of Bob Edgar in “At the Burial of Gallagher and Blind Bill.” (Print courtesy of James Bama in 2016) 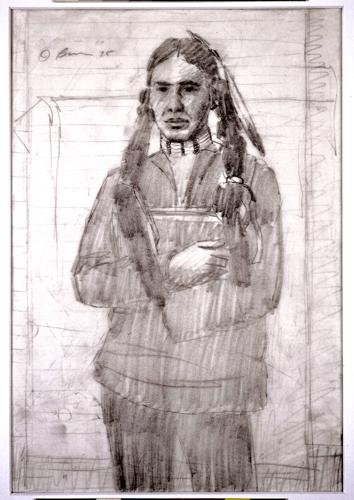 Sketch for “A Contemporary Sioux Indian” in 1975. (Photo courtesy Buffalo Bill Center of the West. Gift of Herbert G. Houze) 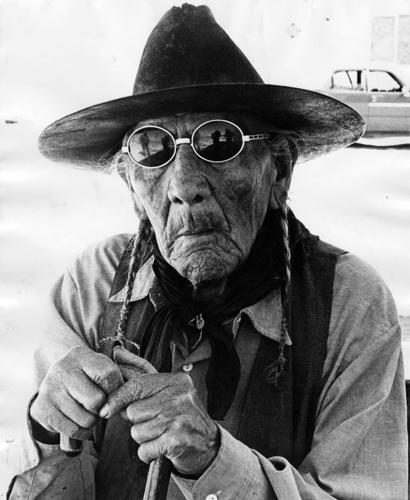 James Bama photographed Francis Setting Eagle at St. Stephens on May 28, 1976. At 94, he was the oldest living Arapaho and a revered tribal elder. (James Bama Collection, McCracken Research Library.) 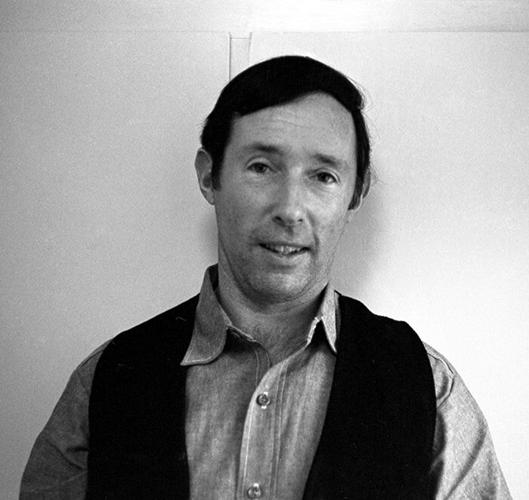 James Bama sketched his “Self-Portrait,” in 1972 with a pencil on tissue paper. (Courtesy of Buffalo Bill Center of the West. Gift of Herbert G. Houze)

James Bama’s painting of Bob Edgar in “At the Burial of Gallagher and Blind Bill.” (Print courtesy of James Bama in 2016)

Sketch for “A Contemporary Sioux Indian” in 1975. (Photo courtesy Buffalo Bill Center of the West. Gift of Herbert G. Houze)

James Bama photographed Francis Setting Eagle at St. Stephens on May 28, 1976. At 94, he was the oldest living Arapaho and a revered tribal elder. (James Bama Collection, McCracken Research Library.)

“He sure could paint.”

In four words, art historian Mindy Besaw captured the gift of Jim Bama, the renowned artist who passed away peacefully at his Wapiti home Sunday at the age of 95.

“He was truly so talented,” added Besaw, Ph.D., curator of the Whitney Western Art Museum of the Buffalo Bill Center of the West, 2007-2015. During that time, she organized a show of his work, which hung in the mezzanine.

More praise for his life and life’s work came from Bob and Nancy Brown of Big Horn Galleries, who represented Bama; Thomas Brent Smith, director of the Fred Jones Jr. Museum at the University of Oklahoma; and Ann and Alan Simpson.

“He brought the world to Cody and Cody to the rest of the world,” Nancy Brown said.

“He was known around the world,” Bob Brown added.

Bama’s paintings appealed to foreign visitors at the Browns’ gallery because the works were “so photorealistic and unique,” he said. “Frequently they thought they were photos. That was a tribute to his skill.”

To Smith, Bama ranked among the earliest practitioners of what later became known as photorealism. “While his brand of realism impresses with detail, his influences included abstract expressionism, pop art and, not surprisingly, photography. He was a true student of art and painting, allowing himself to evolve while remaining authentically himself.

Brown said Bama preferred to be known as an American realist rather than a Western artist, noting, “He didn’t want to be affiliated with that label.” Still, his primary subjects became the characters who dwelled in the West after Bama and his wife, Lynne, relocated from New York to Cody Country in 1968.

“He’s been such a part of Cody for so long,” Brown observed.

Smith, who interviewed Bama for a 2007 article in Points West, also noted the artist’s eye on the present.

“Ignoring anecdotal renditions of an invented Old West,” he said, “James Bama favored contemporary subjects and in so doing his portraits ring a lasting note.”

Born on April 28, 1926, James Elliot Bama attended the High School of Music and Art in New York City. Upon graduation, he determined to pursue a career in illustration and developed the necessary technical skills at the Art Students League in NYC.

Bama focused on the basics of art, including form, human anatomy and precise draftsmanship, along with the elements of composition, color and depth. He also explored photography as a means of producing reference material for his subject matter. Later, out West, Bama would capture images with a camera that he would later translate into paintings.

Working for Cooper Studios in NYC, Bama became one of the firm’s leading illustrators, producing advertising images for major businesses and for popular magazines. He also painted portraits for the baseball and football halls of fame and became the official artist for the New York Giants. Further, he’s credited with creating original artwork for two television series and covers for the “Doc Savage” series in the 1960s.

Those covers generated “a whole legion who followed him,” Brown said. In the same time period, Bama also designed covers for the boxes of plastic monster models, made popular by the rebirth of monster movies.

Besaw heard about Bama’s life before Cody during her regular visits with him and Lynne, who had married in 1964.

“His art had great recognition in New York, and then he decides to come to Cody and embrace all the subject matter here,” she said. “He could have been a fabulous artist anywhere he was.

“To bring his talent and focus on the life of the West, it was a remarkable decision to come and stay in the West.”

After moving to Cody, Bama continued his illustration work during his transition to easel painting until the late 1970s, when he had a successful show in a New York City gallery that enabled him to concentrate on painting.

“He was a great technician, the ways he framed the people,” said Besaw, American Art curator at Crystal Bridges in Bentonville, Ark, “He didn’t overdo it.”

Brown also remarked about Bama’s skill at conveying a narrative on canvas. “He was one of the last of the artists who grew up as illustrators, who could tell a story through painting,” he said. “Jim was terrific at getting the right expressions [on his subjects’ faces] to tell the story.”

“He was an inspiration for dozens and dozens of young artists, who admired his work and idolized him,” he said. The artist offered simple advice to them – “to keep painting and keep painting the best they could.

“Jim credited his fine training and his discipline to work at it. He stayed with it and rarely took time off.”

While absorbed in his work, Bama also supported numerous public causes by donating copies of his work to youth and adult organizations and gave countless prints as fundraisers, Brown said. In a cooperative project, Bama and Big Horn Galleries donated some of the proceeds from a print to support the construction of the Rec Center.

A print of Bob Edgar benefitted Old Trail Town, which Edgar had built. Proceeds from another work went to the Northern Cheyenne, Brown said.

“I bet every organization in Cody has gotten a print from Jim Bama,” he noted.

“In the world of limited edition prints, he was a very popular artist on a national scale,” Brown said.

In recognition of his contribution to the state’s culture and his dedication to portraying the West, especially its people, Bama received the Governor’s Arts Award for 2022 in February. The artist expressed his appreciation by saying, “Having spent over thirty wonderful years painting the people of Wyoming, I’m very grateful to have this recognition from the governor.”

Among those lobbying for the honor was U.S. Sen. Al Simpson (ret.), who described Bama as “a man who had a fire inside. He was going to conquer life.”

Ann and Alan Simpson recalled Bama’s determination to outlive many of his family who hadn’t lived beyond 50. Upon first meeting him, Ann said the artist talked about launching a “wild exercise program.” He wanted to talk about his health, his routine of lifting weights, eating right, walking and playing basketball, Alan added.

“‘I’m here because I want to be in the West, I want the freedom,’” Alan remembered the artist telling him. ‘“I’m here to prove I can have a great life.’

“He was a special man, full of substance. His art is eternal.”

Where to see James Bama artwork

A collection of works by Jim Bama – photographs, pencil sketches and oil paintings – resides in the Buffalo Bill Center of the West. A selection can be viewed online under James Bama at collections.centerofthewest.org.

“He was amazingly talented,” said Karen McWhorter, Collier-Read director of curatorial, education and museum services. “He was a special breed of artist with a unique talent and sensitive vision. That combination is so unique and rare.

“Jim’s work was infused with soulfulness, especially his Western subjects. They inspired empathy and compassion. These are real lives, full stories, each and of themselves.”

As an “uncompromising technician,” McWorter continued, Bama would create sketches with different poses and postures, adding color to his preferences and planning out every detail before beginning to paint a final piece.

“Process was really important to him.”

Time will show that in the same way Montana has Charles Marion Russell, Wyoming has James Elliott Bama. R.I.P.

Cody and Wyoming lost a wonderful artist. He was so very generous…Graham Jackson and I once went to Jim and Lynn and ask for a donation of his art for Cody Regional Health. He gave the hospital many prints which now grace the basement of the hospital by the meeting rooms. I can remember a few of his prints that my parents had in Houston when I was a child. To actually get to meet and become friends with Jim was truly a blessing. He and Lynn were a great couple and she so supported his work. RIP my friend. So proud that you were recognized by Wyoming for your work!