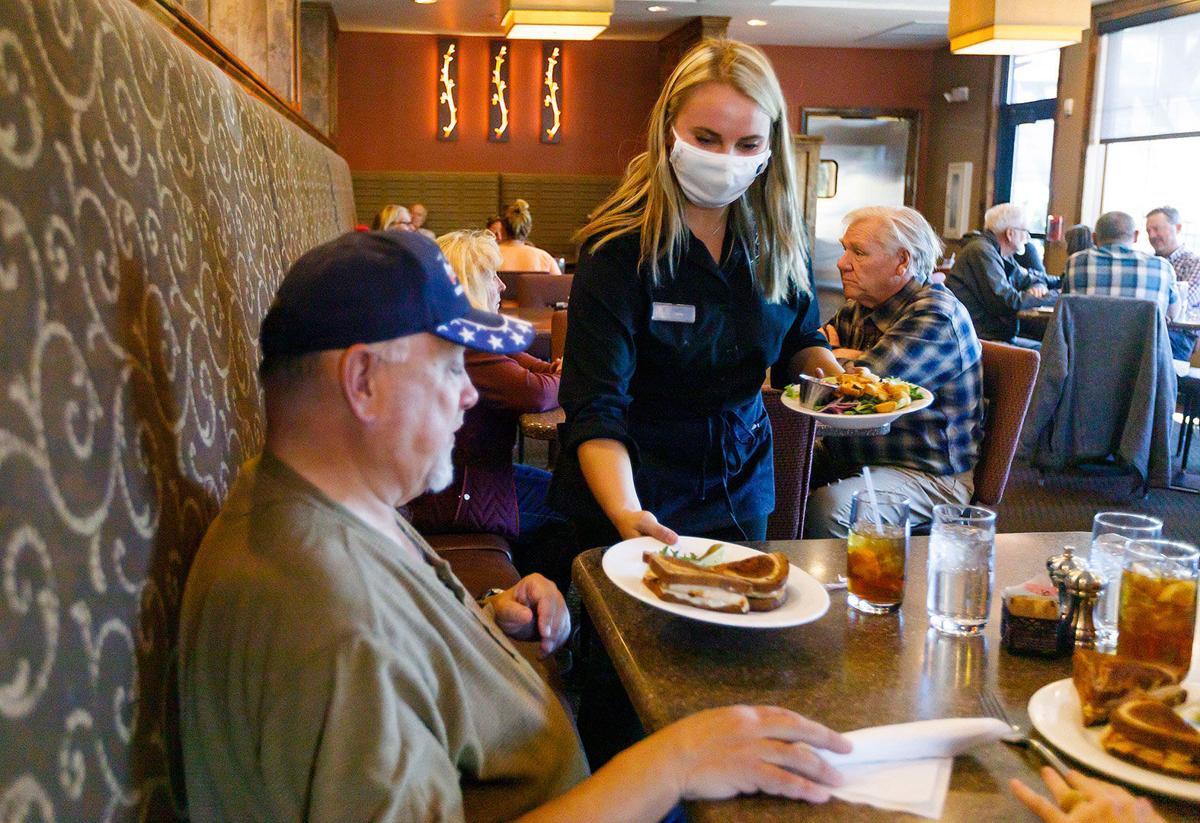 Haley Egger serves Keith McVicar at 8th Street at the Ivy on Tuesday. 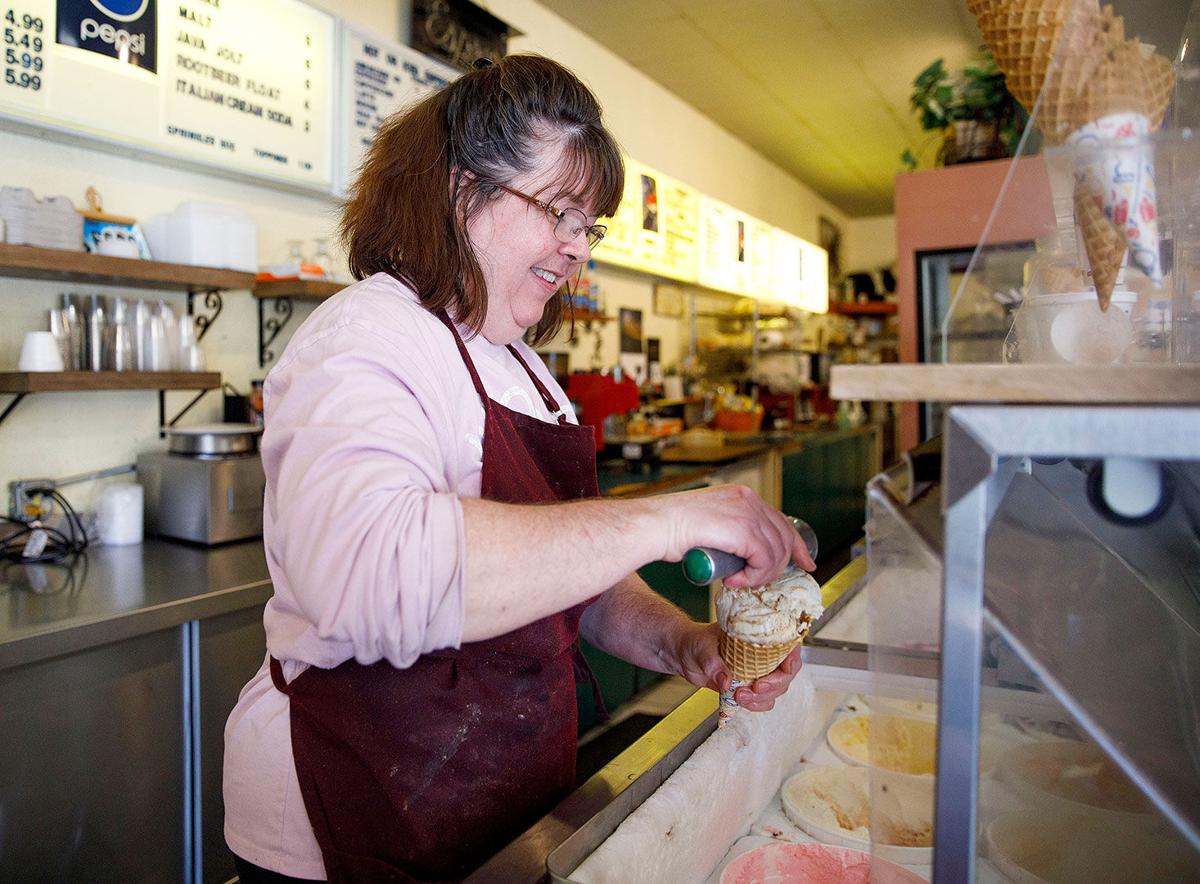 Haley Egger serves Keith McVicar at 8th Street at the Ivy on Tuesday.

As the seasons start to change and students return to school, Cody businesses are still feeling a heavy customer demand that has barely slowed, if at all.

Despite experiencing struggles in the spring and early summer finding employees, many Cody businesses like Cody Steakhouse and Taco John’s weathered the storm and found themselves at adequate staffing by mid-summer. At those two businesses, however, the respite was short-lived.

Taco John’s store manager Shandra Pereira said it was only her and one other employee working a recent night at the store, causing the business to have to close its lobby. Pereira said they will be losing another employee soon when they go back to college.

“Finding employees has been really stressful,” she said.

Randi Ponce, general manager of the Cody and Powell McDonalds franchises, said her businesses have been “very short-handed” since school started back up, with the lobby closed at both stores.

Susan Cory, owner of Peter’s Cafe, said her business never reached full staffing this summer, down about four employees the whole season. Still, she said her sales have been as strong as ever. Due to many Yellowstone National Park lodges prohibiting non-guests from getting food at their facilities, a number of tour bus companies are utilizing her business for boxed lunches. She said she has been booked for this service every day from late August until Oct. 17.

“The pace hasn’t slowed down at all,” she said.

Business has hardly dropped off around town into September as retired travellers now commonly fill up the booths at local restaurants, with hunters soon to follow. Alan Kuckelman, general manager of the 8th Street at the Ivy, said he doesn’t expect any noticeable drop-off in business until Yellowstone closes in early November.

Julie Cocchia, co-owner of the Cody Steakhouse, said she had difficulties just getting people to apply for a job this summer, with most only interested in cutting straight to the chase about pay.

“I don’t understand that,” she said, adding that she pays her employees commensurate with their experience. “How can I take you seriously if you don’t even want to come in and fill an application and talk?”

Pereira, Kuckleman and Cory said they interviewed many people for jobs this summer, but many new hires would either not show up for their first shift or never show up again after working their first day.

“I had to let three go because of so many no-shows,” Cory said. “It’s been like that all summer.”

Pereira said she is trying to avoid asking for help from their corporate office, but at the same feels like her staff is “drowning.”

Kuckelman experienced a similar phenomenon with many applicants telling him they had 5-6 job offers on the table. Both he and Cocchia said there was a bidding war for employees in Cody this summer, with Cocchia having to pay $15 an hour for dishwashers and raise all of her hourly rates just to compete.

“I come back and they’re sitting on a milk crate on their phone,” she said of one dishwasher. “Their attitude is, ‘What are you going to do? Fire me?’ They know I can’t find anybody else. I’d rather do the work myself than pay someone to not do their job.”

She said she has only had about 50% of the servers she needs despite these employees making around $2,000 a week in the summer.

The Ivy offered a $2 an hour bonus for employees who made it through the whole summer, but Kuckelman said this did little to entice applicants. He suspects many Cody businesses that rely solely on food operations will find their finances in the red at year’s end due to the high wages they had to pay employees and escalating food costs.

Cocchia is already making plans for next year, as she hired an attorney to help her get H2B international employees, whom she will house in two trailers she recently purchased.

“We have to do our best just to get through it,” she said, adding she doesn’t see the business ever having enough employees to be open for lunch again.

According to the Pew Research Center, 32.8 % of U.S. teens had a paying job in May, the highest rate since 2008. A decline in the number of teens participating in the labor force has been occurring decades after reaching a peak of 58% in 1979. There was a total of 5.9 million workers in May, down from 8.1 million in 2000.

But those teens who wanted a job this summer had a higher success rate than average, with only 11.2% unemployment by August, 5.2% lower from the year previous. In May, the unemployment rate for teens was at 9.6%, its lowest point since 1953.

With more sports and extracurricular activities than ever before, Cocchia said many in the young labor pool get a free pass from their parents when it comes to pursuing employment. She only has one high schooler on staff right now and has been told by many they need to focus on academics or sports instead of working.

“When I was in school I did all that and a job,” she said. “That’s where the money came from.”

According to a 2018 study from the Brookings Institute, the number of high schoolers working during the school year has also dropped noticeably, declining by 10% since 2000.

One high schooler bucking that trend is Cody High School senior Maddox Growney. Growney said he worked at Gradient Sports this summer and is working Saturdays during the school year, despite also playing football this fall.

“Most of my friends work, but a lot of kids don’t,” he said.

Kuckelman said he has been lucky enough to keep a contingency of veteran high schoolers and college students, whom he has relied on for a number of years. A few of the high schoolers, he said, are working full-time while taking online classes.

Kuckelman said by keeping an extremely flexible work schedule, making a point to hire friends of current employees and as many part-time staffers as possible, he has been able to conquer the worker retention battle.

“It has to be something you want to do,” he said. “If you hate your job you’re not going to feel good about going to it.”

Kuckelman said he is proud of the fact the restaurant had no COVID-19 quarantine issues this summer, but due to the recent uptick in cases, the restaurant is back to most of the same safety protocols it implemented at the height of the pandemic last winter.

Many businesses like 8th Street at the Ivy also experienced difficulty finding workers in their 20s and 30s, a demographic Kuckelman usually relies on for his line cooks, a profession he considers to be a “dying breed.”

Kuckelman and Cocchia both said the lack of affordable housing in Cody likely contributed to this shortage.

“One applicant told me if you can’t provide housing there’s no point in interviewing,” Kuckelman said.

In August, 5.6 million people reported that they had been unable to work because their employer closed or lost business due to the pandemic. Among those not in the labor force in August, 1.5 million people said they were prevented from looking for work due to the pandemic. It is possible for people to go up to 18 months before being cut off from unemployment benefits.

“I think there is still a lot of people collecting unemployment,” Cocchia said.

Kuckelman said he had many no-shows for interviews, which he suspects is a sign of fraud in the Wyoming unemployment system. To curb this type of practice, the state of Montana is offering a $1,200 incentive to unemployed individuals who find employment and work for at least four weeks.

So you come to Cody and buy a restaurant for $500,000 - $1 million, but you can't find help to run it? Unreal. The workers are out there. Answer: FAMILY. That's why the Mexican, Chinese, the German Restaurant, the Cutthroat are fully staffed and prosper. It's all hands on deck - family.

In my career as an IRS Agent, I audited many restaurants and staff across Wyoming. I never saw a waiter/waitress who made more than the minimum allocated tips…. At least that’s what they reported on their 1040.

No one said anyone was making $100,000 per year. The entire article was about seasonal work and seasonal pay.

Julie Cocchia is paying $15 an hour for washing dishes and claims servers are making $2000 a week? I would like to see those pay stubs.

Waitressing at a nice restaurant 5-6 days or nights a week, I can absolutely believe $2000 in tips. A quick spin around a calculator will bear that out. You'll never see a pay stub for that, because the wage is not the deal...the tip is. Tips don't come with pay stubs. Amber, if you're not dropping 20% tip for a well served meal, you ought to consider it.

Where does one find a well served meal nowadays? Nowhere I have found in Wyoming anymore is worth the price the eating establishment demands.

Treat your labor like...you know what...and it will come back to haunt you. Remember all those years wages were so low in Cody...it's that karma thing.

Says the guy who says meals in Cody are too pricey for what they are! So, owners should pay staff more AND lower prices. You were an employee all your life, weren't you?

If you buy right good quality food people will come and eat. And your servers will never complain what their pay is

Wages are still low compared to the national average I way to be very successful in the restaurant or food service is not your tourist, it is your locals that keep you afloat year around (ie: good food). Which is lacking here in cody. most restaurants ,not al,l herd you in and out like cattle and they are the ones complaing