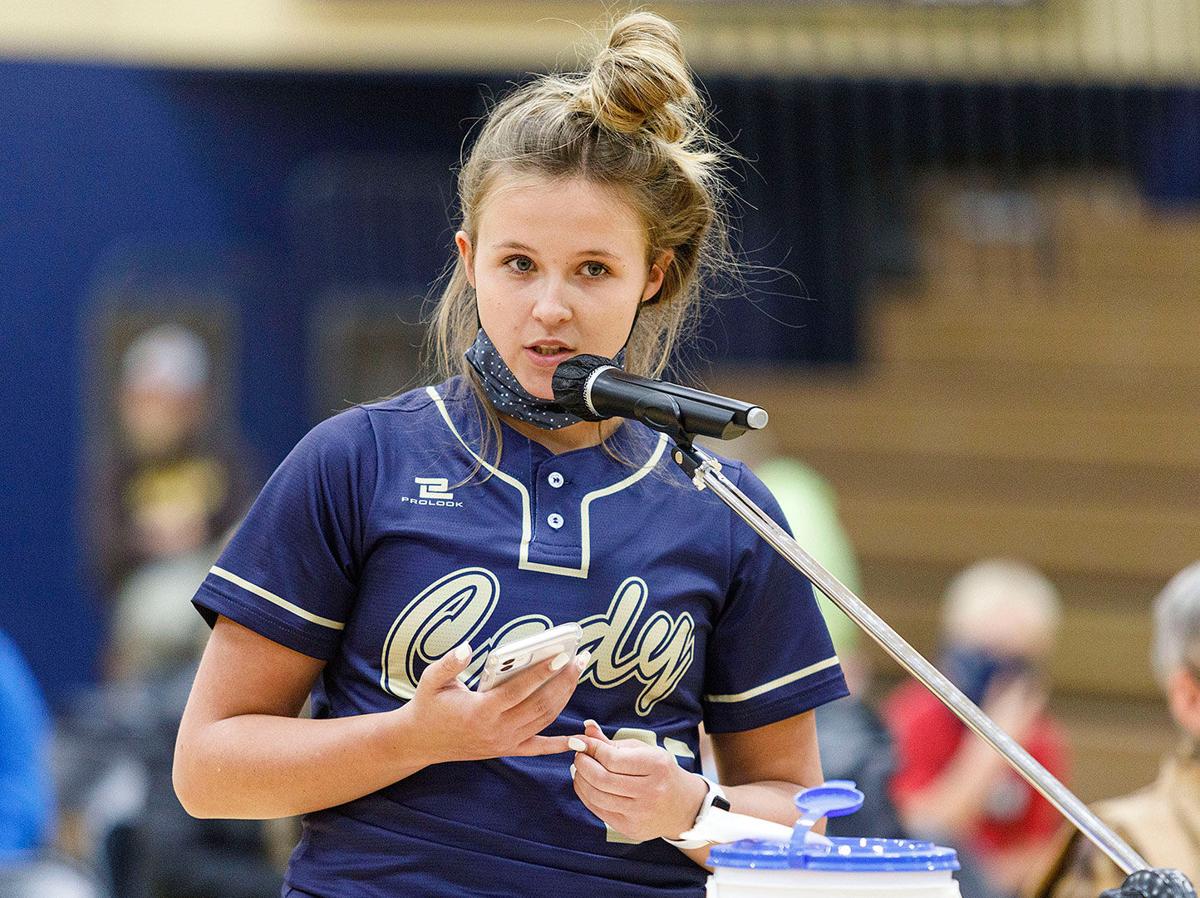 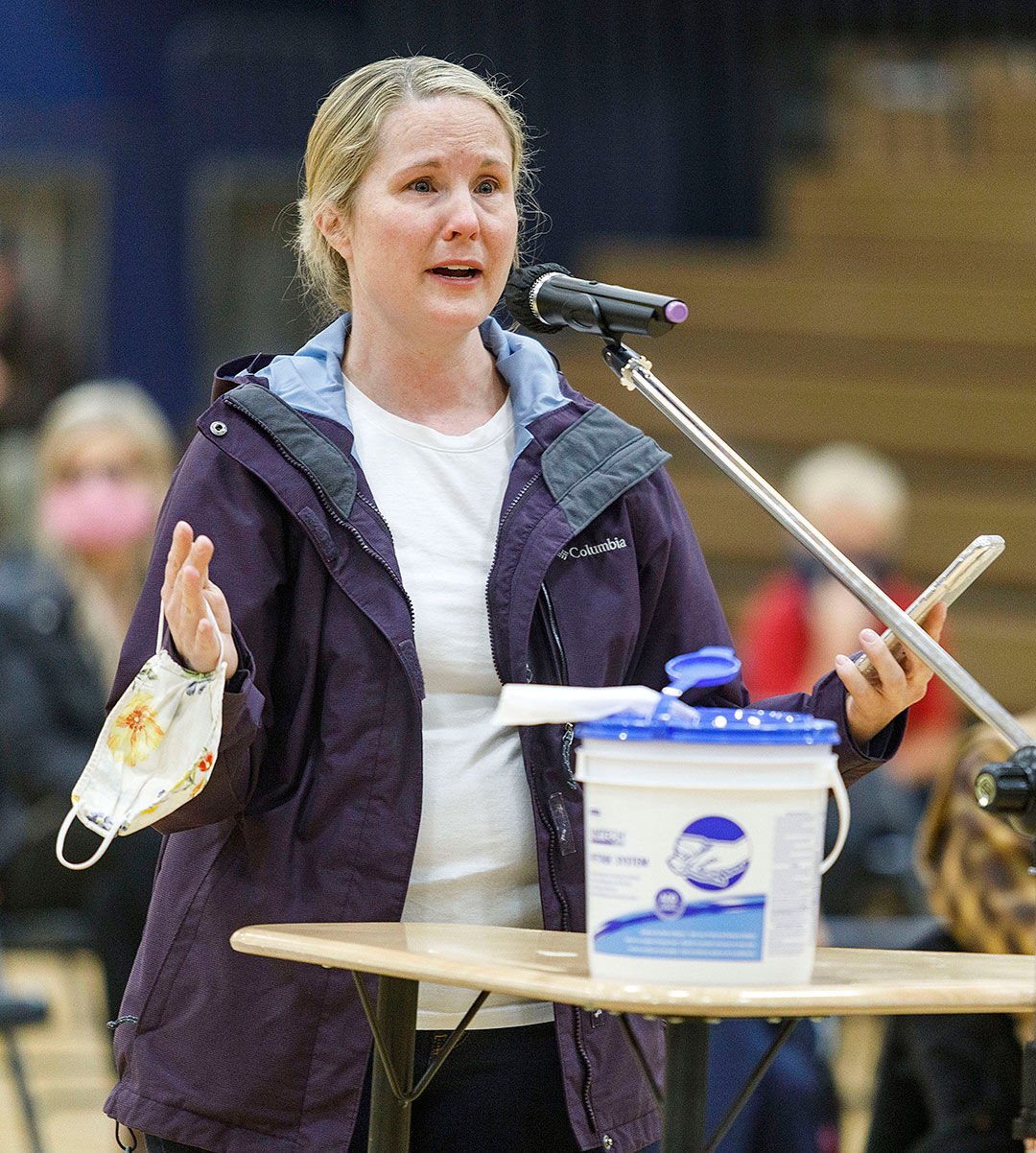 Sara Hopkin talks about her children’s involvement in tennis and band Monday during the school activities forum at Cody Middle School. 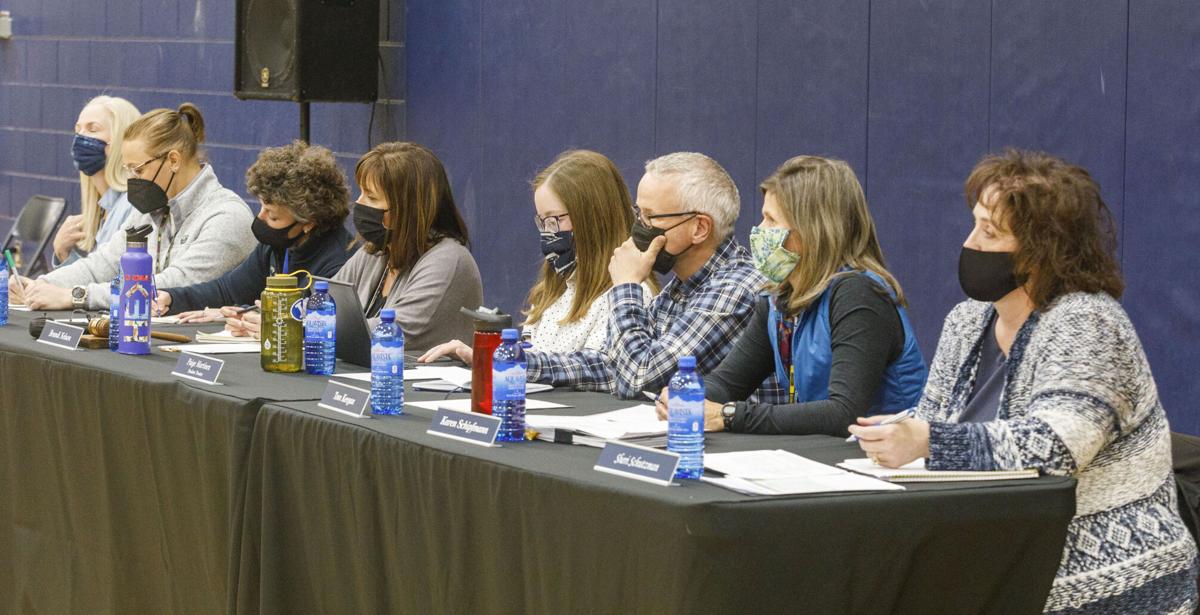 The Cody School board listens to community members during the forum.

Sara Hopkin talks about her children’s involvement in tennis and band Monday during the school activities forum at Cody Middle School.

The Cody School board listens to community members during the forum.

Not every person who took the mic at the public forum held in the middle school gym Monday night said the exact same thing, but their messages were clear: cut something, anything, other than activities.

Sara Hopkin is the mother of several children in the district, including two who are members of the tennis teams at Cody High School and Cody Middle School as well as the school bands.

“I feel that my children are blessed because they do not do the main sports. They do the little stuff, the side stuff, and they get such joy and friendship from that,” she said, holding back tears. “I feel we can truly find other ways to reduce spending without fully cutting out any other program.”

The forum was held after suggested cuts by activities director Tony Hult were made public as another step in the process to make possible cuts to the overall school budget. This year, the district put an additional $209,000 in the school activities budget to provide every possible outlet for students in Wyoming. Those funds came from the general fund, which can be used for nearly any district expense.

Cody is the smallest district in the state to offer every activity sanctioned by the Wyoming High School Activities Association.

“This process was one that began months ago,” said school board chair Brandi Nelson, addressing the crowd in the gym. “As part of that process, we asked for recommendations from the athletic department. The next part of that process is now seeking your input.”

Input was in no short supply. Students and members of the community spoke with a unified voice, asking the district to look somewhere, anywhere, other than the activities. Many of the 33 who spoke focused on specific sports that were named in the preliminary recommendations from the athletic department, primarily Nordic skiing and softball.

“I feel by cutting smaller programs, it’s detrimental to people’s willingness and ability to go to school,” said CHS junior and Nordic skier Sabrina Stowell. “Every student should be able to be on a team where they feel like they belong … I feel with these communities I have found in these smaller sports, I have found a family and I have found something that I love.”

Many current and future members of the Cody Fillies softball team spoke about how excited they were to have an opportunity to continue their careers on the diamond, and softball parents voiced their support as well.

“Being a senior and having softball become a sport in the year I graduate is a blessing I count twice,” said CHS senior Ally Schroeder. “If you do decide to take this sport away, I can say wholeheartedly you would be taking away more than just a sport.”

Community members who spoke testified to the generosity of Cody and the willingness to support all activities out there. Others offered suggestions like increasing activities fees (the second fee increase in four years), partnering with nonprofit organizations and opening up fundraising opportunities to help with more than just meals for away games. Jennifer Kitchens used the outpouring of funds from one call for donations for the softball team as an example.

“To say softball has the support of our community would be an understatement,” she said. “After selling 50-50 raffle tickets and sloppy joes at this weekend’s home games along with the outpour of sponsors, the team now has $6,730 in their club account.”

Still others spoke about the worry they had for what students might do without having sports and activities to fill their time after school.

Many parents cited the activities available as sources of motivation for their children to come to school or do well in class.

“I don’t think anyone can deny the value of any activities, whether they’re band [or] athletics,” said Richard Becker. “If you want to motivate students, they have to have a reason to come to school, and you can’t motivate them with a big stick.”

Though it was not one of the activities mentioned for cuts by Hult in the initial recommendations, several members of the Cody Bronc Band also spoke at the meeting, in full concert regalia just before they had to zip across town to perform. CHS junior Xavier Stover was speaking about the band, but his remarks summed up the sentiment about every activity mentioned Monday night.

“[Band] really fundamentally helps students become better students by letting them experience something new that can change their world for the better,” Stover said.

No decisions have yet been made by the board, and Nelson assured the crowd the process would take some more time to complete.

“In my opinion, sports and activities teach students more about themselves and how to succeed in life than can ever be taught in the classroom,” Jen Talich said.

There is going to be cuts and best to get used to it.