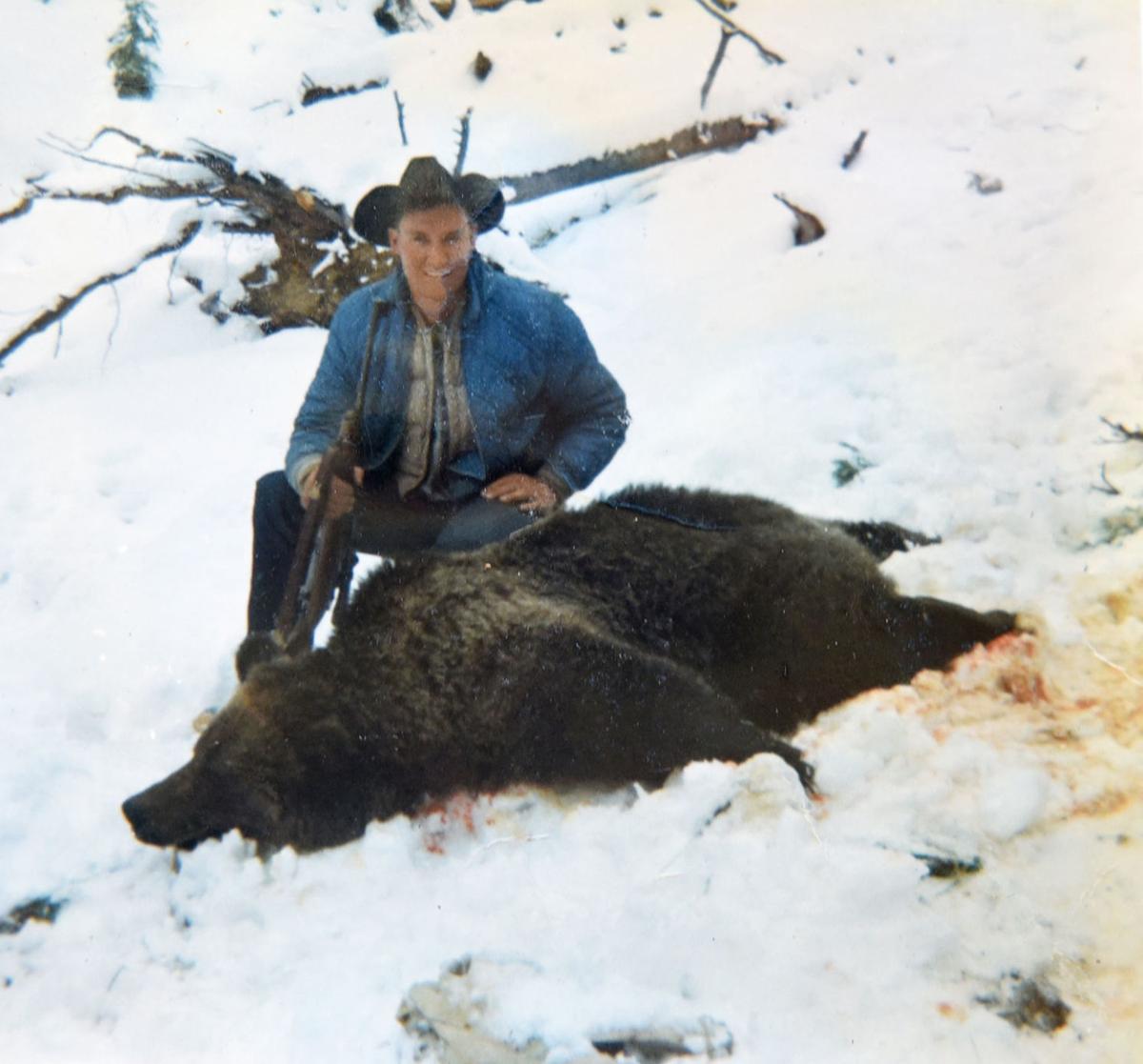 Guide Gary Fales poses with a grizzly bear shot by a client near the Thorofare River in 1966. 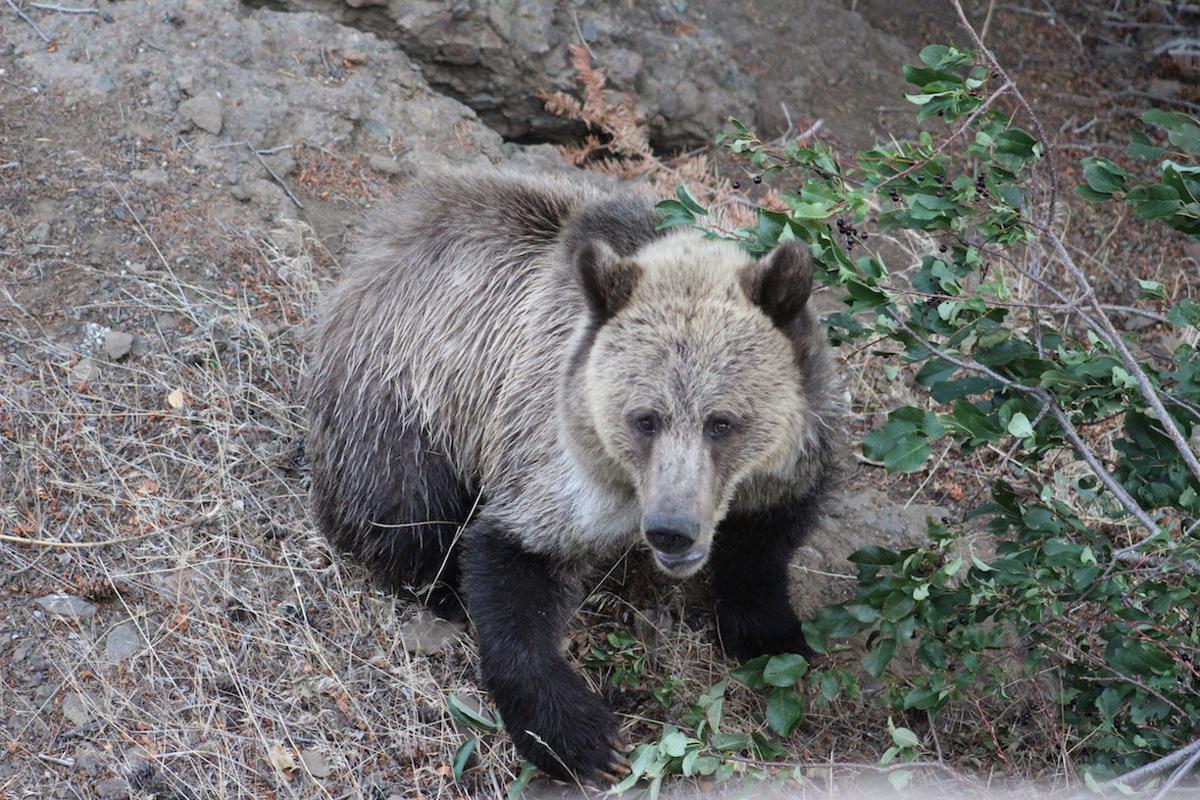 A grizzly bear forages for food alongside US 14-16-20 between Cody and the East Gate to Yellowstone National Park.

Guide Gary Fales poses with a grizzly bear shot by a client near the Thorofare River in 1966.

A grizzly bear forages for food alongside US 14-16-20 between Cody and the East Gate to Yellowstone National Park.

(Editor’s note: Delisting from federal protection and a planned Wyoming hunt have created nationwide attention for the Greater Yellowstone grizzly bear. This is the third in a series on the history and current status of the iconic animal.)

At 73, Gary Fales is old enough to remember when bear hunting was a routine part of the guided horseback hunts he and his dad Glenn outfitted in the remote Thorofare backcountry.

Hunters obtained tags for other species and permission to take a bear was thrown in.

It has been 45 years since hunting grizzlies was legal in Wyoming and not many outfitters are still in business who led the types of hunts the Fales family did from their Rimrock Ranch on the North Fork.

Gary Fales, no longer guiding, never actually killed a grizzly. He led hunters to a spot where “an old, crippled horse” that once might have been a pal was put down and used for bait instead of being sent to a slaughterhouse.

Bears found the carcass irresistible and when they arrived, the hunters shot.

“I held the horses,” Fales said.

Wyoming Game and Fish’s first authorized grizzly hunt since, set in stages to start Sept. 1 and conclude by Nov. 15, will be completely different in nature.

Until a year ago, the Yellowstone grizzly was under the protection of the Endangered Species Act. U.S. Fish and Wildlife delisted the animal a year ago, returning management of the species to Wyoming, Montana and Idaho.

The scheduled 2018 hunt will be strictly controlled. Just 22 licenses have been issued, 11 inside the 19,279-square-mile Demographic Monitoring Area of critical habitat for the bears. In the interests of long-term reproduction, that hunt will be terminated if a single female is killed. Another 11 licenses were awarded for a hunt outside the DMA.

Unlike the earlier days when the Fales family could use dead horses to entice bears, no bait is allowed within the DMA and only very limited baiting is permitted, with prior approval, outside the DMA.

There are educational requirements, bear spray must be carried, and timely reporting rules in case of a kill are mandated.

In the year since the July 31, 2017, return of bear management to the state, G&F conducted hearings on proposed rules, solicited public input through other means, presented its case to the G&F Commission and on May 23 received approval to conduct the hunt.

“It was quite evident people in the state were supportive,” Nesvik said. “That was truly what they wanted us to do.”

Certainly, there is a constituency of outdoorsmen anxious to add bear hunting to their repertoire of personal choice activities.

There are also citizens and government officials wary of increased human-bear conflicts.

While just one Livingston guide has had to kill a bear to protect a client, about 10 years ago, Livingston said he has felt threatened many times.

“I can count numerous times I could have pulled the trigger and been justified,” he said.

Bears are so common in Wapiti, 20 miles from Cody, Richard Jones, a retired National Park Service ranger, has a standard joke when asked if he is scared to live there.

To some degree, to hunt or not to hunt bears has evolved into a culture-war skirmish.

Conservation groups contesting the state’s plan to conduct a hunt are headquartered in other parts of the country and are generally anti-hunting.

“We have some very polarized viewpoints on grizzlies,” said Dan Thompson, the Game and Fish large carnivore specialist who supervised the reasoning behind and presentation of the department’s case in public forums.

The smorgasbord of organizations with a stake in halting the hunt through lawsuits consolidated for hearing Aug. 30 in federal court in Missoula, Mont., has more in common with each other than with many Wyoming residents.

Among those groups are the Sierra Club, Center for Biological Diversity, Humane Society of the United States, Defenders of Wildlife, plus Native American tribes that claim the Yellowstone grizzly should never have been delisted because it violates their religious freedom.

At the May 23 meeting in Lander where the hunt regulations were approved, Brandon Sazue, representing the Northern Arapahoe Elders Society, told the G&F Commission that tribes consider the bear a “sacred” animal and consider it “genocidal” to hunt grizzlies.

At that meeting, Bonnie Rice, the Sierra Club’s Greater Yellowstone representative, said the group has “strong opposition” to trophy hunting. “Grizzly bears are the essence of wildlife and the cornerstone of the ecosystem.” A hunt, she said, will be “seen by the world as unethical.”

Mader said bears are worth millions in tourism bucks and a hunt should be “balanced against tourism dollars.”

In an interview, Andrea Santarsiere, an attorney for the Center of Biological Diversity, which is based in Tucson, Ariz., and claims a membership of 1.1 million, cited several reasons to oppose a hunt.

The group’s position is that the grizzly is not a recovered species because it exists in just 5 percent of its original habitat in the Lower 48 states; the Yellowstone grizzly must connect with another population for long-term genetic diversity; and its traditional food sources are threatened.

Santarsiere said Aug. 30 in court “will be a monumental day, whether it’s good or bad. The best thing for us would be if Judge (Dana) Christensen rules they were illegally delisted and they go back on the Endangered Species list.”

Those who favor a hunt dismiss Santarsiere’s arguments as ignoring scientific analysis.

It is the “Yellowstone” grizzly that is recovered and should be removed from federal protection for the first time since 1975, not all grizzlies, they say. No one believes a time machine will help grizzlies bounce back everywhere they have lived since the 19th century.

Similarly, science indicates the bears adapted to the loss of whitebark pine nuts as a staple dietary item and that Yellowstone grizzlies are genetically robust without connecting to Northern Rockies bears.

“They either have no clue or they totally disregard scientific facts,” said Cody hunting guide and hiker Tev Kelley.

Powell outfitter Colby Gines said anyone who doesn’t believe grizzlies have recovered “is out of their minds.”

“They have no basis in biology,” Grosskopf said. “It’s a fundraiser for the NGOs [non-governmental organizations]. It’s a cash cow for them. We’ve studied this 10 different ways.”

As Yellowstone grizzlies lost the pine nuts’ nutritional value and faced declining Yellowstone cutthroat trout numbers, they expanded their feeding grounds and discovered a taste for Army cutworm moths at high elevations in the Park and in the mountains outside it.

The moths provide a single calorie per swallow, but the bears invade their territory and gorge on them by the thousands in a sitting.

Grosskopf traveled miles by horseback and foot above Dead Indian Pass to observe.

“They kept rolling over rocks with their claws and paws and stuck their heads between the rocks and lapped them up,” he said. “There were hundreds underneath a rock.”

When people engage in any wilderness activity near Cody, there is the risk of a run-in with a bear and officials recommend carrying bear spray.

Bear spray is an outdoor companion for author Leslie Patten. She likes having bears near her rural home and chokecherry shrubs that seasonally attract bears, not far from a Yellowstone Park boundary where Game and Fish relocates troublesome grizzlies.

While cautious, Patten said, “I just feel they really add to our experience. I feel like they make us better human beings, being alert hiking in the woods. Just being afraid, I don’t think that’s healthy.”

Patten said the only time she used her bear spray was in Yellowstone on a bison that accidentally cornered her.

In Patten’s mind, when it comes to hunting, the bears outside the DMA are important too, because they will expand from Yellowstone territory to connect with others.

“I don’t believe they should be a rug or a stuffed animal,” Patten said.

Dan White, a retired Cody teacher and outdoorsman, said he hates to see the Endangered Species Act perverted into keeping them on the list indefinitely.

“You can’t get them off when they are no longer endangered,” White said. “It is not the Emotional Species Act.”

Slowness in delisting is one gripe about the act Wyoming residents have and why U.S. Sen. John Barrasso is trying to get colleagues to rewrite ESA provisions.

Judge Christensen, though, has the power to put Wyoming’s hunt on hold indefinitely.

Recalling past cases and lengthy delays delisting the grey wolf, Livingston predicted that’s what is going to occur.

“Past history indicates there’s a strong possibility it will be shut down,” Livingston said.

For all his time spent in grizzly territory, Gary Fales’ closest injury call came at home.

He heard a thump on his front porch one day, swung open his screen door and saw a grizzly with its back to him.

Fales yelled, “Hey!” The bear turned abruptly and jumped at him, dropping to all fours. It scared him, then departed.

Other times, at hunting camps, familiar bears hung around and Fales confidently walked past them to his tent.

“That doesn’t mean the next one’s not going to eat me up,” he said.

That is less likely now. When others take part in Wyoming’s next grizzly hunt, Fales will remain home, watching with curiosity as a retired hunter.