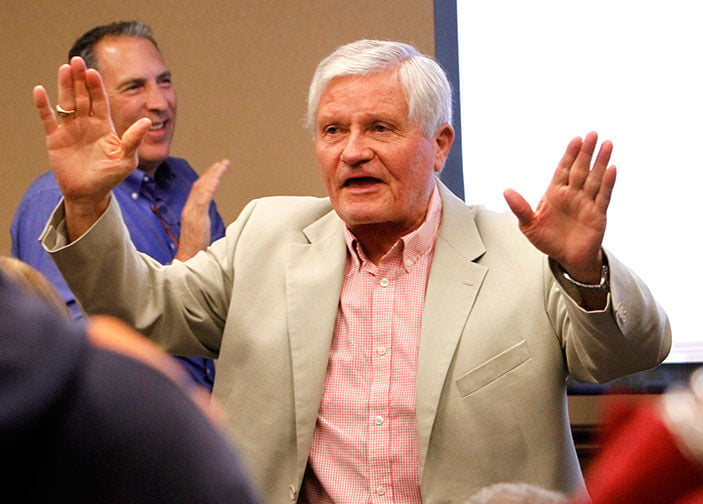 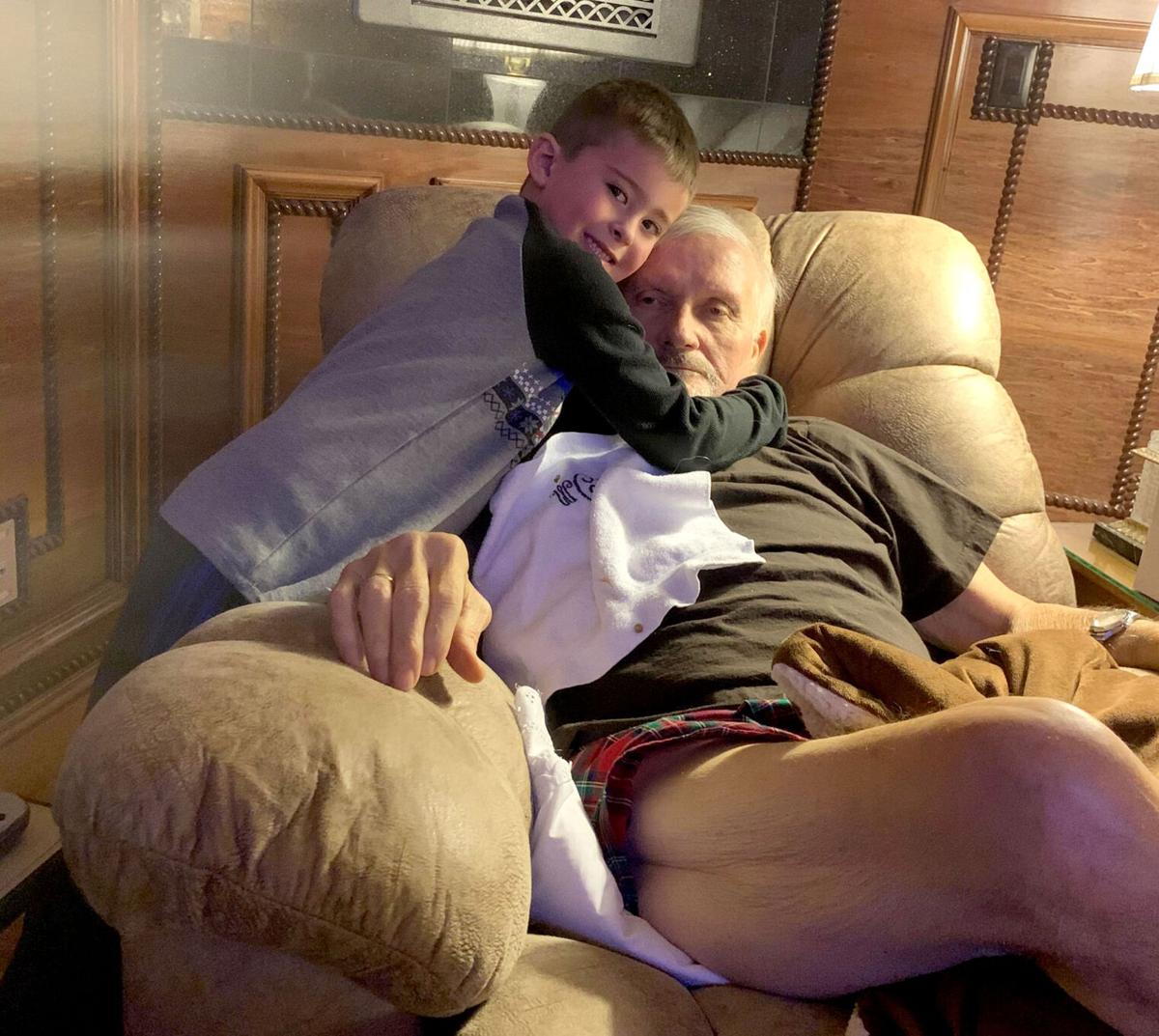 Henry Coe shares a moment with his grandfather Hank Coe. 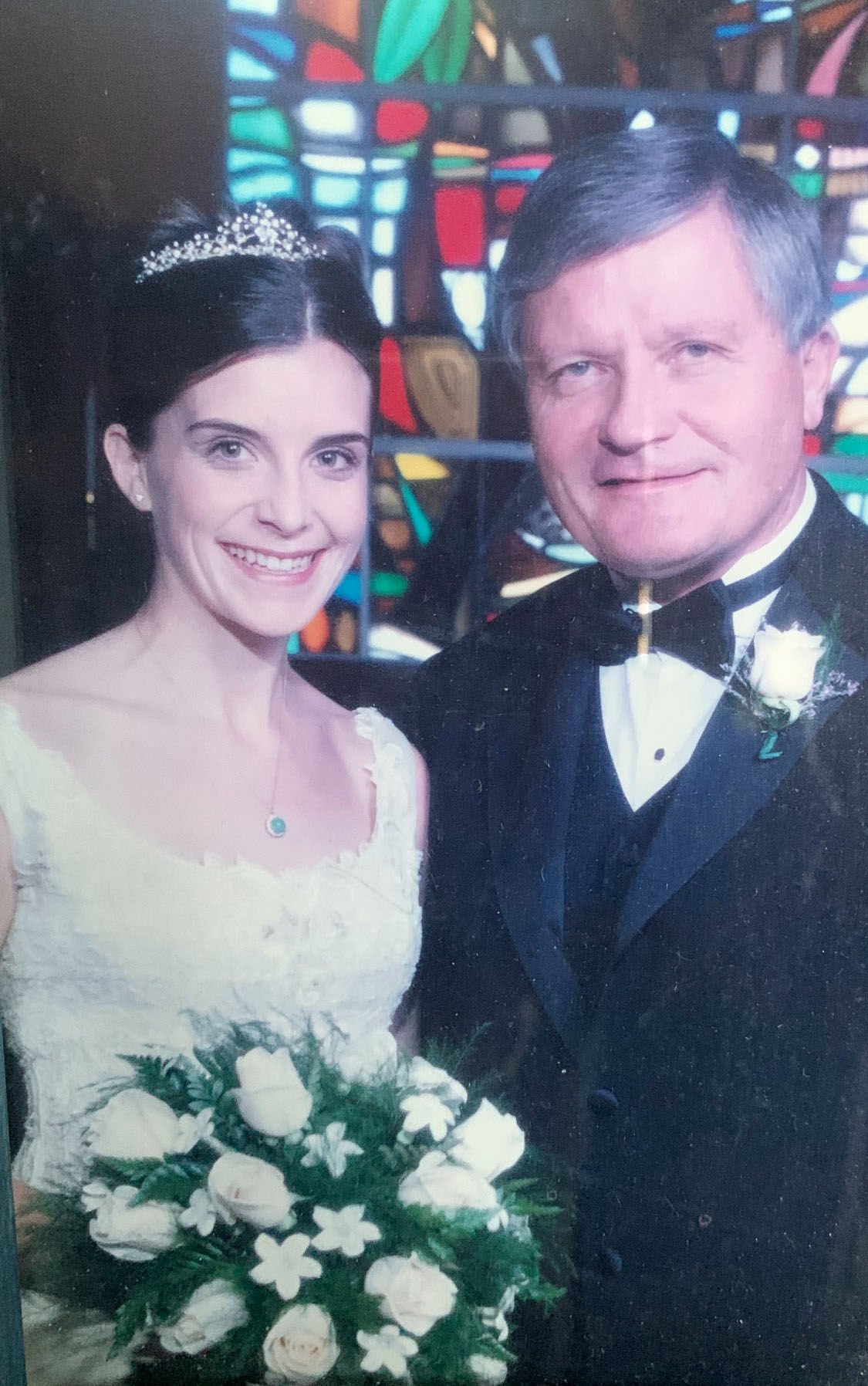 Bethany Coe Boydstun is pictured with her father Hank Coe on her wedding day. (courtesy photos)

Henry Coe shares a moment with his grandfather Hank Coe.

Bethany Coe Boydstun is pictured with her father Hank Coe on her wedding day. (courtesy photos)

He served his constituents in Cheyenne and served his community as a volunteer firefighter, leaving a legacy in his wake.

Coe died Thursday afternoon after a battle with pancreatic cancer.

Although he was not diagnosed with cancer until late last fall, the disease came on quickly.

“It all happened so fast with my dad,” son H.R. Coe said.

Hank Coe’s daughter Bethany Coe Boydstun said that after a rough-go in the week prior, by around Tuesday blood tests were showing his cancer counts as “through the roof.”

Coe had always loved his community and its constituents. Working to better and protect their lives was his life-driving passion.

Last March he chose not to run again for his senate seat after serving for 32 years with the body.

On Thursday the Wyoming State Legislature honored Coe with a moment of silence. Coe was honored by the Park County commissioners last Tuesday for his service as well, designating his birthday April 29 as Hank Coe Day in Park County. Due to his weak condition he wasn’t able to attend the ceremony in person, but was still able to watch from home.

In an Enterprise interview Jan. 8, he said he wanted to be remembered as a man who “loved the community and cared about people,” doing “his best to represent and protect them.”

Coe grew up in Cody, his family already long-established as community benefactors.

“He’s helped so many people around the state because his family has been the heart and soul in the community,” his ex-wife Marty Coe said.

H.R. Coe said his father was convinced that Cody is the greatest place on the Earth.

“He’d always tell me, ‘I don’t know where you’re going to move that’s better than Cody, Wyo.,’” he said.

His grandfather, William Robertson Coe, helped fund West Park Regional Hospital and the Cody Medical Foundation. His family was also instrumental in developing the Buffalo Bill Center of the West.

But Coe didn’t step into those shoes of responsibility right away, saying he was a bit of a troublemaker growing up. That was why his father, Henry Coe, tapped fellow hooligan-turned-politician Al Simpson, an attorney at the time but eventual U.S. senator, to give Hank Coe some motivational advice while the young man was attending boarding school in Lawrenceville, N.J.

His advice may not have had an overnight effect but it did plant a seed.

Retired State Sen. Eli Bebout of Riverton became friends with Coe while at the University of Wyoming and the two have been inseparable ever since.

“We’ve worked on bills together when he was in the Senate and I was in the House,” Bebout said. “I had to laugh, when we ganged up on the House members it was interesting. It was just because we had the experience, and experience is a wonderful thing.”

The two worked together to pass thousands of pages of legislation and were considered proverbial giants of the legislature by the time they finished their service. Bebout and Coe made a joint announcement on PBS announcing their retirement.

“He was a very, very good legislator,” Bebout said. “He was a good debater. He knew his facts, his figures.”

Bebout said Coe was well respected for being a straight-shooter and man of integrity, not one to shy away from working in a bipartisan manner.

“We’re talking of individuals leaving us today that are larger than those who just sit in those chairs,” said Sen. Bill Landen (R-Casper) during a Joint Education Committee meeting in December. “What we’re really going to miss in the Wyoming State Senate is his ability to calm the waters.

“He’s the heart and soul of the Senate.”

The opportunity to shape children’s lives was partially what led to Coe becoming co-chairman of the Joint Education Committee  in 2003.

Coe helped start the Hathaway Scholarship and described it as “paramount” to providing students “a way to look at the future.”

Wyoming Gov. Mark Gordon worked with Coe on the Hathaway when Gordon was state treasurer.

“Sen. Coe was a good friend and a good man,” Gordon said. “His work to improve education in Wyoming and his efforts to strengthen the state’s finances were extraordinary. Hank was first and foremost a true son of Cody.”

Coe was also involved with education recalibrations, and established equal servicing requirements among the state’s school districts, including the state’s commitment of $2.5 billion to school construction over a nine-year span.

But he was not spared from difficult reelection campaigns, his 2016 race a particularly muddy affair. H.R. Coe said he took some of the attacks levelled against his father personally and said he had been encouraging his father to retire for eight years.

But Coe was hesitant to quit. H.R. Coe remembered a piece of sage insight his father and Bebout gave him during one dinner spent together in Cheyenne.

“They said, ‘You know why we do it? Because we love it,’” H.R. Coe said. “That sums up everything with my father. He’s everybody’s dad in a roundabout way. He did it for his whole life and I’m beyond proud of it.

“He did it for the people.”

When he wasn’t putting out fires on the Senate floor Coe was extinguishing real flames in the local community. Coe joined the Cody Fire Department as a volunteer firefighter in 1972, a position he would hold for the next 23 years, serving as assistant chief and chief.

“Like every little boy, I loved fire trucks,” he said of his desire to fight fires.

More than any bill passed or honor received, he said his time spent with the fire department was a responsibility he considered one of the most rewarding of his life.

“He was a big benefit,” Parker said.

Coe said it was his senatorial predecessor Bob Frisby who encouraged him to run for his seat. In turn, Coe encouraged Sandy Newsome to run for state representative in 2018.

“He was a mentor through the whole process,” she said.

He also continued the family tradition of supporting the local hospital and Buffalo Bill Center of the West, serving as the Cody Medical Foundation president and as a Center of the West board of trustees member.

His longtime friend and fellow trustee Naoma Tate remembered Coe waking up at six in the morning to help cook pancakes for museum events.

Coe recognized the importance of providing transportation access to Cody and was a driving member of the Cody-Yellowstone Air Improvement Resources organization, an advocacy group for Yellowstone Regional Airport that he helped found.

Fellow CYAIR member Bucky Hall said Coe was instrumental in raising funds for the airport through local donations and funding at the state level.

“The amount of effort he’s put in for that airport is almost immeasurable,” Hall said.

Coe would travel with Hall across the country to lobby for YRA in front of airline executives, petitioning for more flights and days of air service to and from Cody.

“The fact that we have our current air service with two reliable carriers is because of Hank,” Newsome said.

Coe Boydstun said keeping up with her father’s whereabouts was always a bit of a “Where’s Waldo?” like task, but he always showed his children and grandchildren how much he cared about them, loving to inquire about the weather around them and how they were doing, even when he became sick.

When she returned home to Denver on Friday she found herself pulling out her phone to talk to her dad.

“I almost caught myself texting him when I landed,” she said.

Coe refused to let it interfere with the waning days of his senatorial career, only missing his last committee meeting in late December.

He said he was “humbled” by the outpouring of support he received about his illness, calling it “unbelievable.”

During the Jan. 8 interview, Coe expressed optimism and said his condition had improved.

(Tom Coulter of the Wyoming Tribune Eagle contributed to this report)

With the passing of Hank Coe last week, an incredible outpouring of response was seen from Wyoming’s congressional delegation, governors, stat…