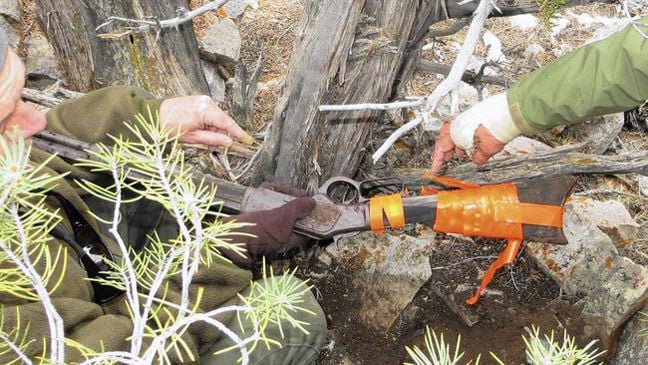 Archeologist Eva Jensen spotted this Winchester Model 1873 rifle in Nevada’s Snake Mountains in Great Basin National Park. The Buffalo Bill Center of the West determined the gun made in 1872. But the story behind the gun’s owner and why it was placed there remain a mystery. (Courtesy photos) 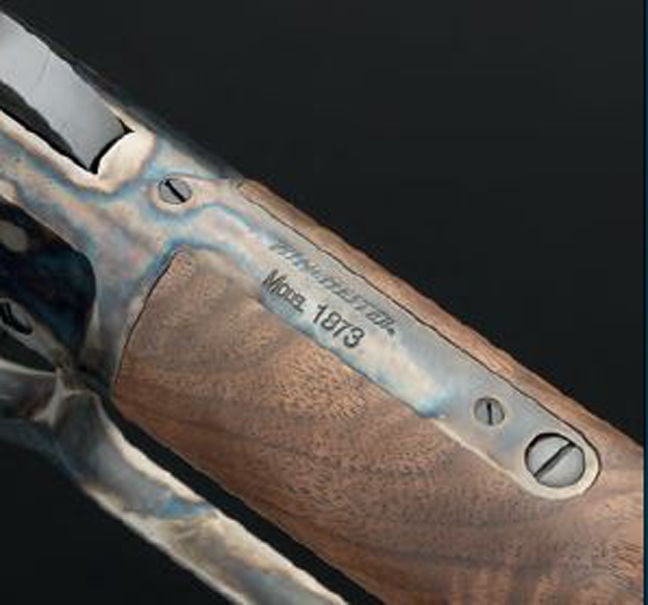 Archeologist Eva Jensen spotted this Winchester Model 1873 rifle in Nevada’s Snake Mountains in Great Basin National Park. The Buffalo Bill Center of the West determined the gun made in 1872. But the story behind the gun’s owner and why it was placed there remain a mystery. (Courtesy photos)

LAS VEGAS – There it was, abandoned for the ages, propped up against a juniper tree in far-eastern Nevada’s Snake Mountains, a Winchester Model 1873 repeating rifle: the gun, as legend goes, that won the American West.

For archaeologist Eva Jensen, it’s something much more – a mystery that continues to baffle the staff at Great Basin National Park: Who owned it? A luckless hunter or miner? Maybe an outlaw on the run?

And how on earth did it get there?

The search for answers has taken the 57-year-old veteran scientist out of the field and into tiny research libraries – scouting old newspapers, 130-year-old bills of sale, family histories and yellowed letters in several Western states.

Finally, experts at the Buffalo Bill Center of the West helped solve part of the riddle.

Everyone, Jensen said, has a different theory about what happened.

“That’s the lure of this find,” she said.

Her quest began in early November when Jensen and a team of archaeologists were walking a remote hillside in the massive park four hours northeast of Las Vegas. The group was on unexplored terrain searching for Native American artifacts or petroglyphs prior to a scheduled burning of vegetation.

It was the rifle – its wooden butt jammed into the ground and supported by a few rocks, so weathered and gnarled it looked like part of the terrain. The barrel was propped against the tree and, chameleon-like, blended in, covered with juniper debris.

“It was an, ‘Oh, my gosh’ moment. I sort of let out this exclamation – then I couldn’t say anything,” Jensen said. “At first the staff thought I’d fallen off a cliff. It was just so unexpected that it took a little time for my mind to catch up.”

She circled the tree several times. There was no mistake about it. This was a Winchester. And there had to be a story behind it. Speculation started right there in the high-desert wilds.

“One thing we all assumed was that someone here had a bad day,” Jensen said. “One of the staff said, ‘Why do you set your gun down and forget where you put it? That just doesn’t happen.’”

There was more conjecture. Maybe a cowboy or shepherd had been out looking for a lost steer or sheep. Or some prospector got flustered when he thought he’d struck the mother lode.

The gun’s location – on a wooded, craggy hillside with a commanding view of the valley to the east – suggested a good strategic spot for a gun battle. Maybe the gun jammed and was abandoned. The .44-caliber rifle wasn’t loaded.

No one knew. But Jensen was set on finding out.

The Winchester company, based in New Haven, Conn., produced 720,000 of the model from 1873 to 1916. The original often featured an oil-finished walnut stock, blued-steel crescent butt plate and a 20-inch-long octagon barrel.

Every gun was stamped with a serial number. So Jensen consulted the Center in Cody and determined the gun in her possession was made in 1882 – an eventful year in the Old West.

That’s when outlaw Jesse James was killed by Robert Ford and when gunfighter Billy Claiborne, who survived the showdown at the OK Corral, was shot dead in the streets of Tombstone, Ariz. It’s also the year Congress outlawed polygamy and John D. Rockefeller created the Standard Oil Trust. Charles Darwin, Henry Wadsworth Longfellow and Mary Todd Lincoln all died in 1882.

Jensen even found the weapon’s order number. She knew the rifle was shipped from the Connecticut warehouse that year. But she couldn’t locate who ordered the gun or where it went.

So Jensen consulted newspapers of the day – the Ward Reflex and White Pine County Record – that chronicled the then-thriving mining industry in northern Nevada. She found tantalizing tidbits, including ads from dry goods stores selling Winchester rifles, even the name of a gunsmith in the area.

But there were no stories of any gun battle or outlaw search that might have put a history to the gun. She found a picture of a member of a prominent family holding a Winchester, but it was the wrong model.

In 1873 the Winchester sold for $50, but the price dropped in half during a subsequent recession, Jensen said. Sales remained brisk because the weapon was a Western trendsetter: the lever action meant it could fire 15 shots without reloading. Think of actor Chuck Connors, with that steely eyed glare, quickly pumping his Winchester in the opening of the old TV series “The Rifleman.”

The gun is now part of the park’s public collection. For now, Jensen said, it’s being kept in climate-controlled storage. Park officials are keeping the location of the gun’s discovery a secret.

“It would have been wonderful to just leave it as we found it,” Jensen said. “But once people hear about this thing, they will go looking for the spot.”

Even if the mystery is never solved, Jensen feels lucky to be on the case.

“In archaeology, things happen when you have the right light,” she said. “We found the gun right after lunch, in the early afternoon. If the sun had been in a different spot, it might have been shaded and we would have never seen it.”