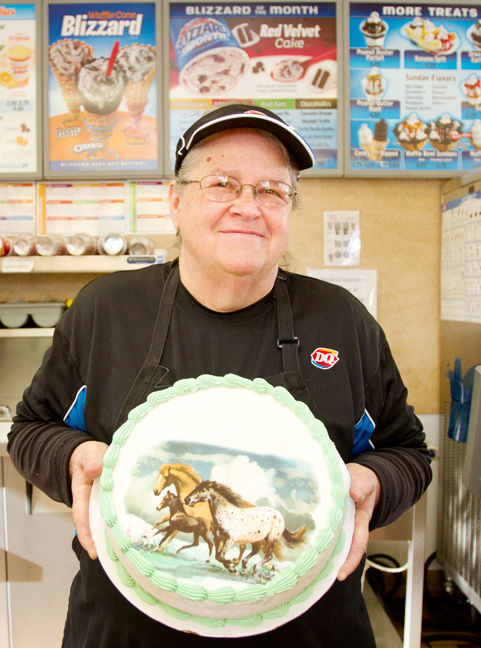 Nancy Andren shows off a cake with an edible image, which is one of the many cakes available at Dairy Queen. 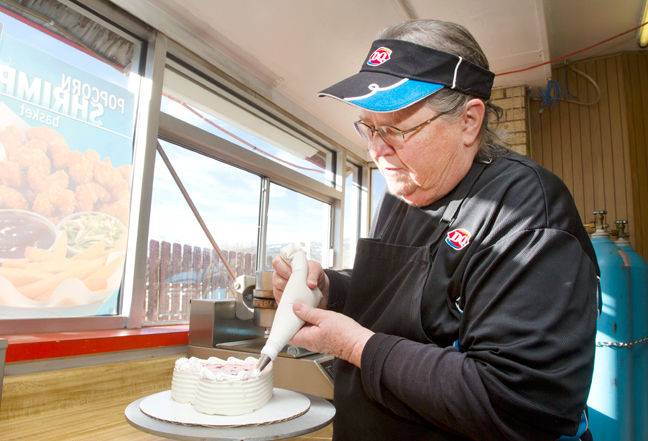 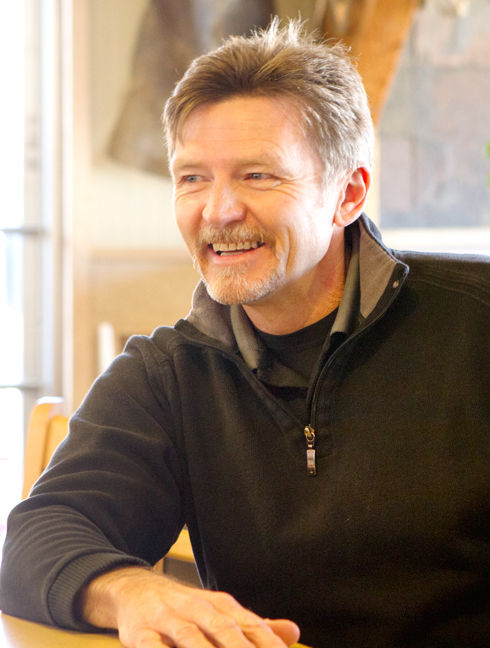 Nancy Andren shows off a cake with an edible image, which is one of the many cakes available at Dairy Queen.

“When the boss wasn’t around, I just started,” Nancy Andren says with a twinkle in her eye.

She is referring to the job of which she never tires – decorating ice cream cakes at Dairy Queen.

On the color palette, green would best describe her ranking in the knowledge of decorating when she picked up a frosting-laden spatula.

It didn’t take long to begin building muscles in her hand as she practiced making edible flowers, squeezing the icing bag and watching the tip create stars, dots, lines and leaves.

“I just had a natural ability,” she says shyly. “I felt more comfortable without people standing over me.

Before long she was decorating cars, the edible kind that would fit on a cake.

“She stays busy over there,” supervisor John Rodgers said.

The job isn’t just a piece of cake. There are frustrations, time elements and short notice. It all comes when a customer arrives and orders a cake decorated in 25 minutes.

“Or they want it right now,” she says with a laugh.

It isn’t quite that simple. Sure, there are cakes in the refrigerated display cases. And they’re for sale. It’s the special orders that don’t magically appear. The cakes may be ready to go, but they have to be transformed into the design specified.

The list is long but Andren takes it in stride.

It’s about to get hectic with Valentine’s Day just around the corner. With fingers crossed, she hopes all the orders don’t come in Friday for a Saturday or Sunday delivery. Even experts have their limits, she says. Although she’s up for the challenge to see how many she can make in an hour.

If she gets in a bind, she calls for help from Rodgers, who was a cake decorator at Walmart. Through the years, she’s experimented and honed her skills.

Rodgers has been at Dairy Queen two-plus years.

“They told me, ‘This is her space. It’s what she does. Make sure she has what she needs. Take care of her,’” he said.

With her 25th anniversary at the shop coming in April, Andren also has trained others to do what she does. It’s not an easy trade. The younger ones soon discover it involves a great deal of work making frosting and using the precise color with the gels to make special cakes, she said.

“I often have ice cream all over the place over there,” she said.

In the beginning, she used to draw all the images on the cakes. Technology has speeded up the process with edible images that are placed on the cakes.

She takes requests for all-vanilla or all-chocolate cakes. Blizzard cakes – a Dairy Queen staple – are made to order, Rodgers added. Blizzard cakes are as popular as plain ones, she said.

“So whatever the favorite Blizzard is, we can make that in a cake,” Rodgers adds.

The cake side of the business is a major part of the ice cream sales. They’re what draw in customers, he said. It’s a two-way street. They come in for a cake, wait for their order, see something on the menu and make an additional order. Or vice versa.

It didn’t take long for Rodgers to notice that customers recognize Andren’s ability. What he didn’t know was how much time it takes to create the magic and how busy it keeps his decorator.

Andren isn’t just a cake decorator. She’s the face of Cody’s Dairy Queen, greeting customers who come through the drive-up or to the counter.

“She runs the drive-thru and makes cakes,” he says in awe. “That surprised me, and her ability to juggle the two. It kind of blew my mind. ‘Wow, she can really handle this.’”

There are familiar customers from Powell, Clark and Worland who rely on the cake queen to make the day special. Andren can’t help but worry whether the cakes will safely make the trip to their extended destinations. So far no complaints.

Customers want to talk directly to the decorator. Some even have brought her decorator tips to use.

Her biggest reward is hearing comments on the beautiful outcome, telling her, “I didn’t know you could do that,” she said. Kids like to watch her work, marveling at her speed.

The most unusual request has been for a banana split cake. Most recently she had some fun creating a water park theme cake complete with people in inner tubes.

Customers, friends and her husband can find her weekdays behind the counter or standing beside a cake stand.

She especially enjoys talking to people and getting to know them. She’s gained many friends.

“Everyone in town knows Nancy,” Rodgers said. “She’s become part of the store and part of what we’re all about. She’s a great role model. She’s such a ray of sunshine.”

Doug and Eileen Scott own Dairy Queen. He revealed another of Andren’s talents. She makes all the waffle cones once or twice a week. During the summers, they’re made daily.

No plans for retirement

When the Scotts purchased the business four years ago, they decided to stay open year-round, which helps the kids he employs and is a stabilizing feature.

“I wanted a business to work with younger kids to help them understand business and hard work,” said Scott, 53. “I wanted to give them a foundation for moving ahead in life.”

Andren, 65, has no plans to retire. She knows she would get bored sitting at home.

She occasionally takes home a cake for her husband Dean, a semi-retired rancher. No chocolate for him, strictly vanilla.

“I can only handle a little bit of ice cream, even at home,” she said. “Then there are days when a Blizzard would taste really good. That’s about it.”

Andren’s priorities away from the business have altered. She admits she’s lost all desire to bake and cook.

Her hobbies now include crocheting and embroidery, sewing anything that involves a needle and thread. She has a quilt in progress.

“It will be a while yet before I can get that finished,” she said.

Owner Scott told Andren she has a job at Dairy Queen for as long as she wants. He appreciates her experience, familiarity with the customers and work ethic.

“She goes above and beyond, and the cakes she makes are a testament to her creativity,” he adds. “When you get a cake from Nancy, she wants you to be wowed.”