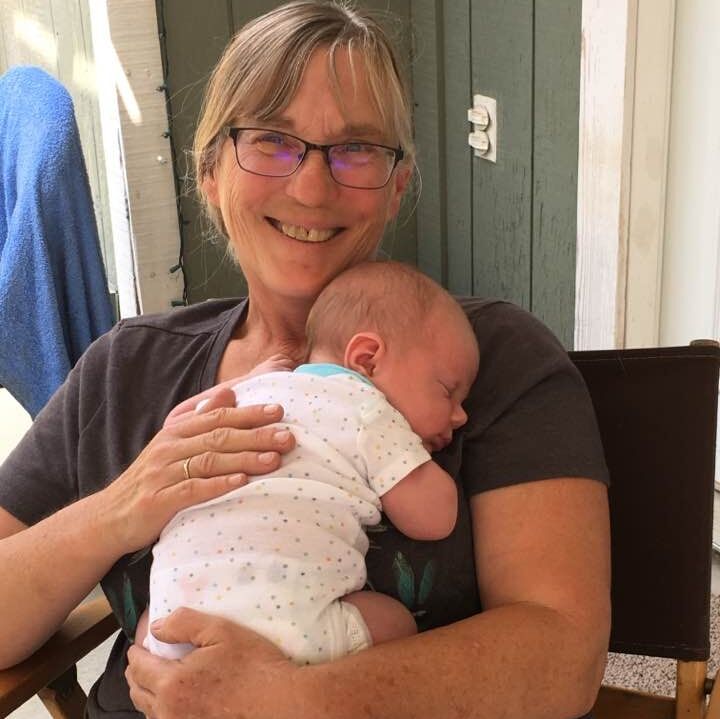 Cindy Ruth, 61, holding her grandchild in a 2017 photo, was the wife of Clark volunteer firefighter Jerry Ruth. (Courtesy photo) 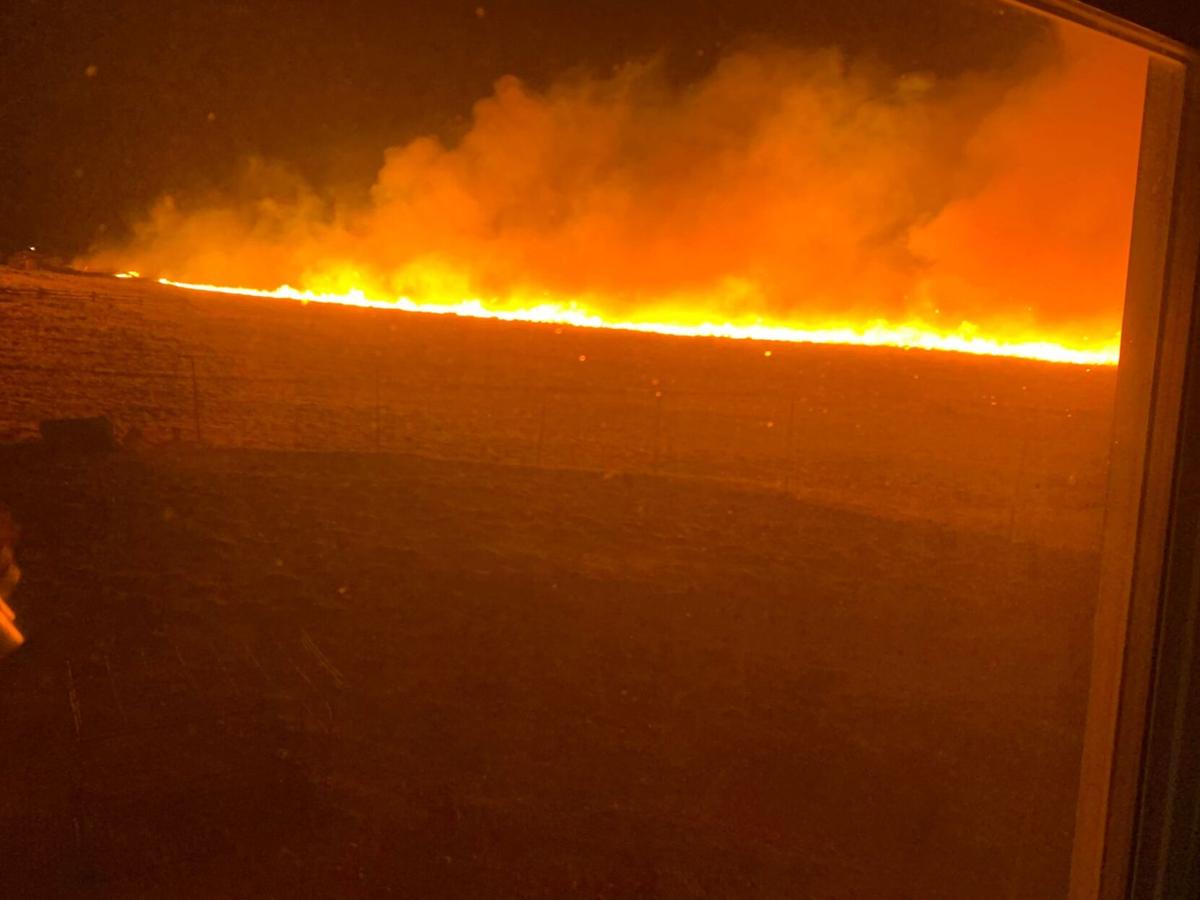 A photo taken from the kitchen window of Clark resident James Hayes' residence. 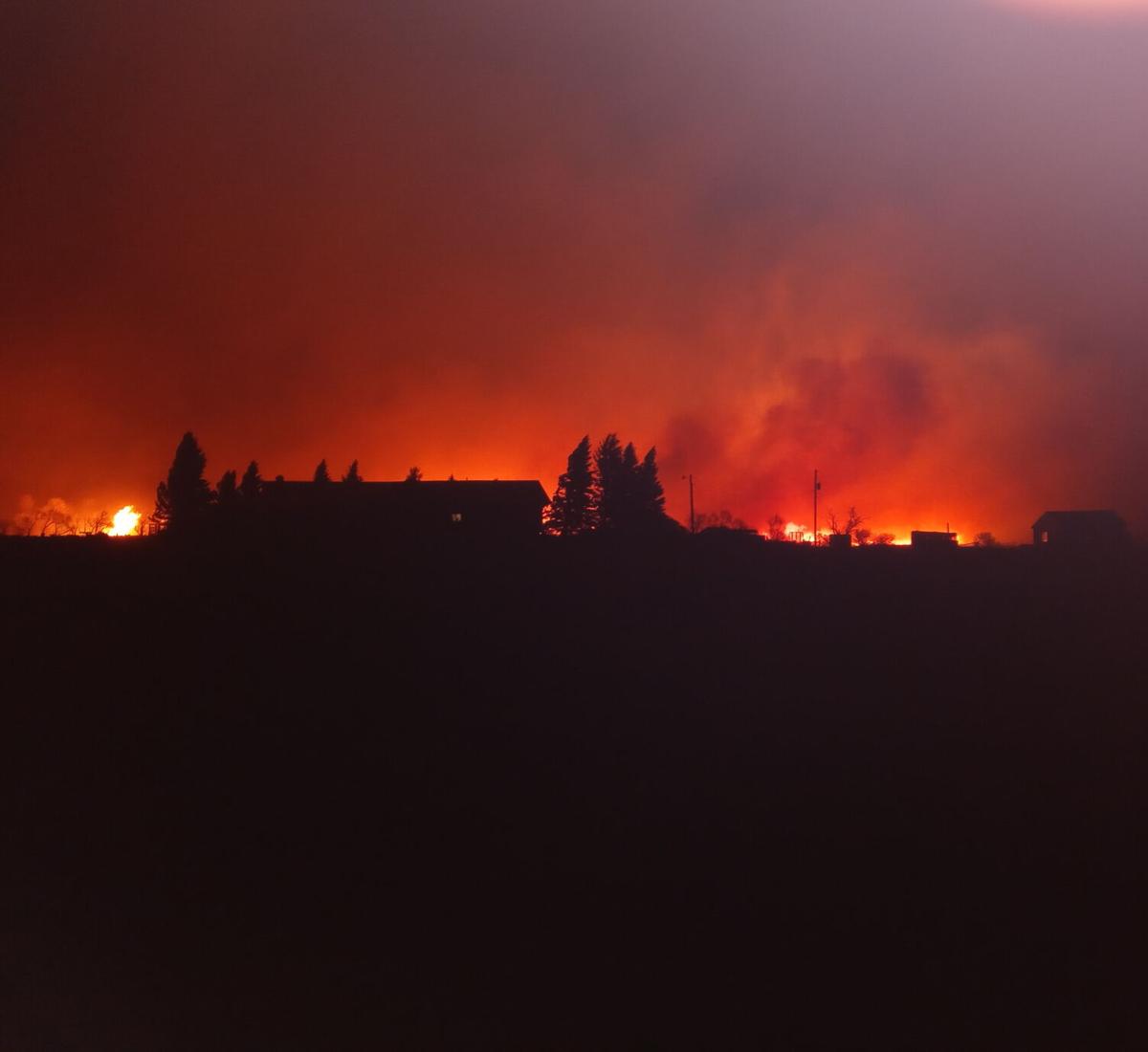 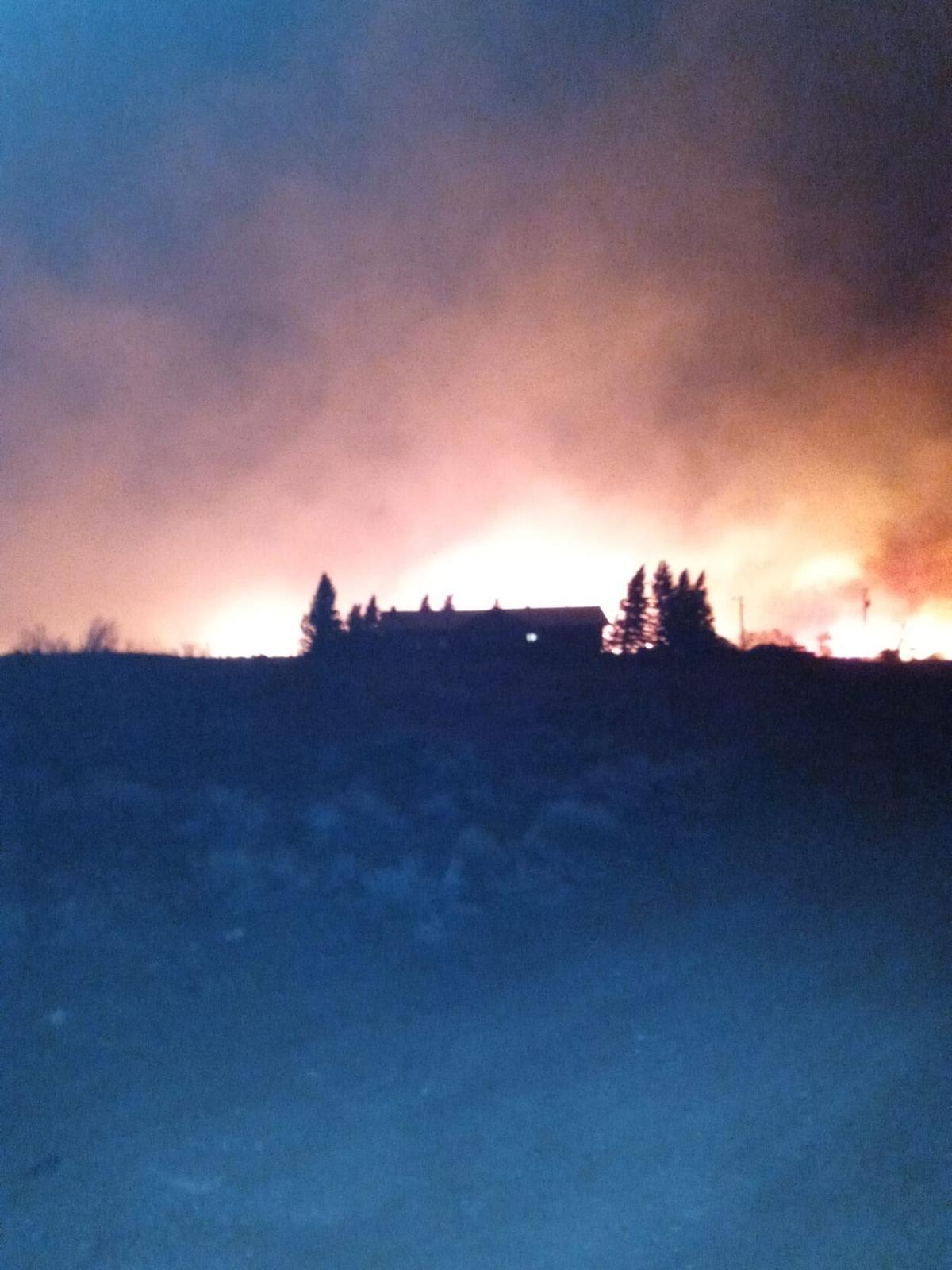 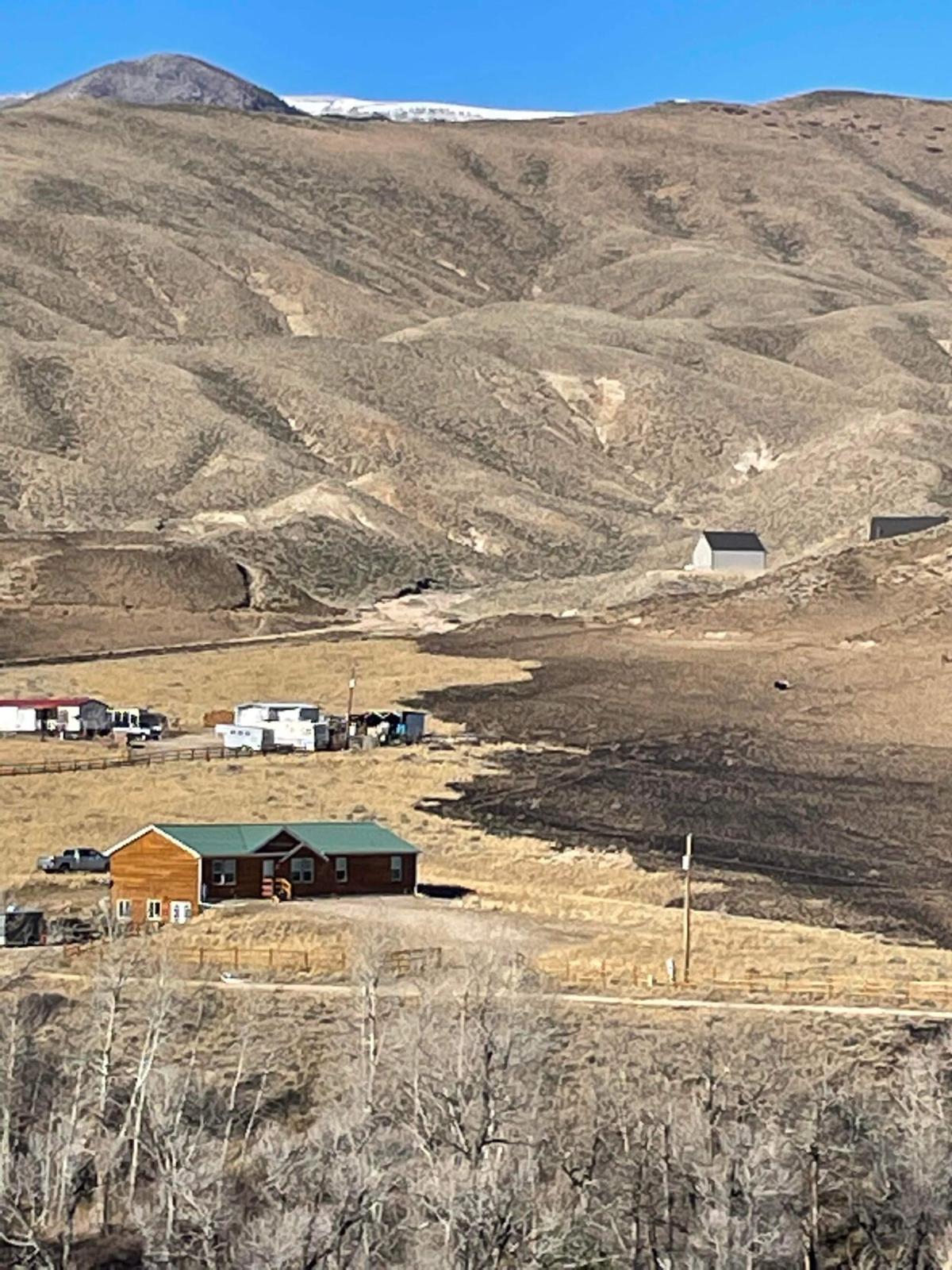 A view of the fire burn that passed by Marcella Bodner's home in Clark. 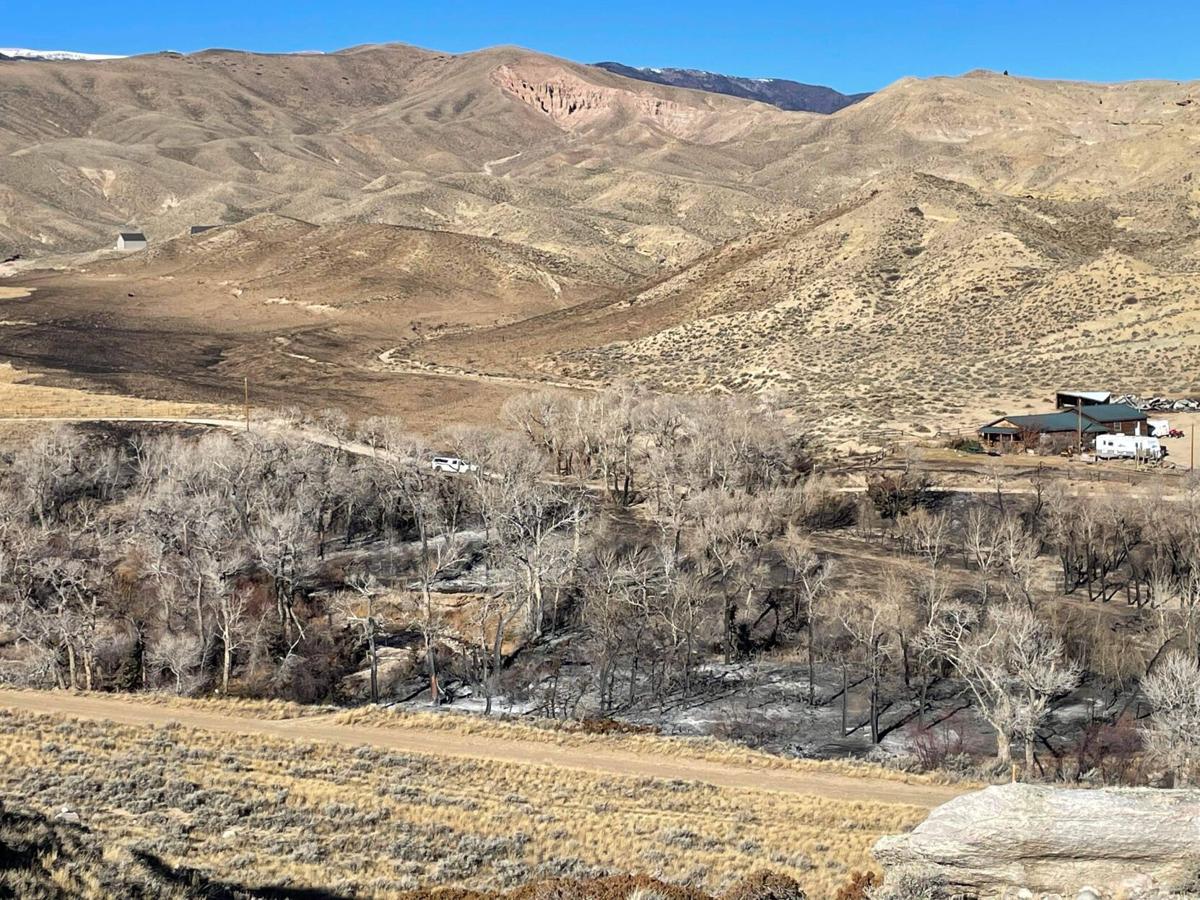 The area around Line Creek was burned, including a bridge that crossed the riverbed from Gunpowder Drive. 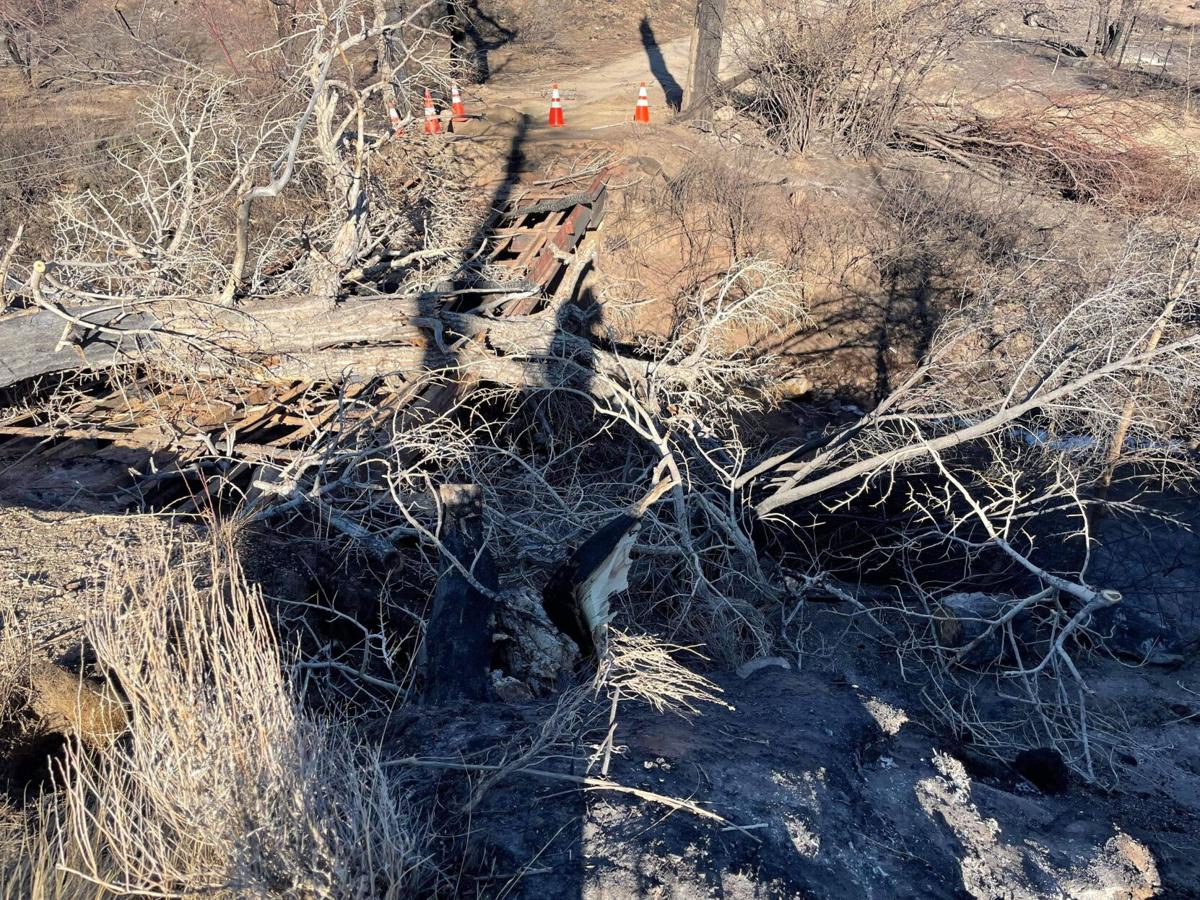 The Gunpowder Drive bridge in Clark was badly damaged in the fire. Crews felled a couple trees across the bridge to deter people from trying to cross it. 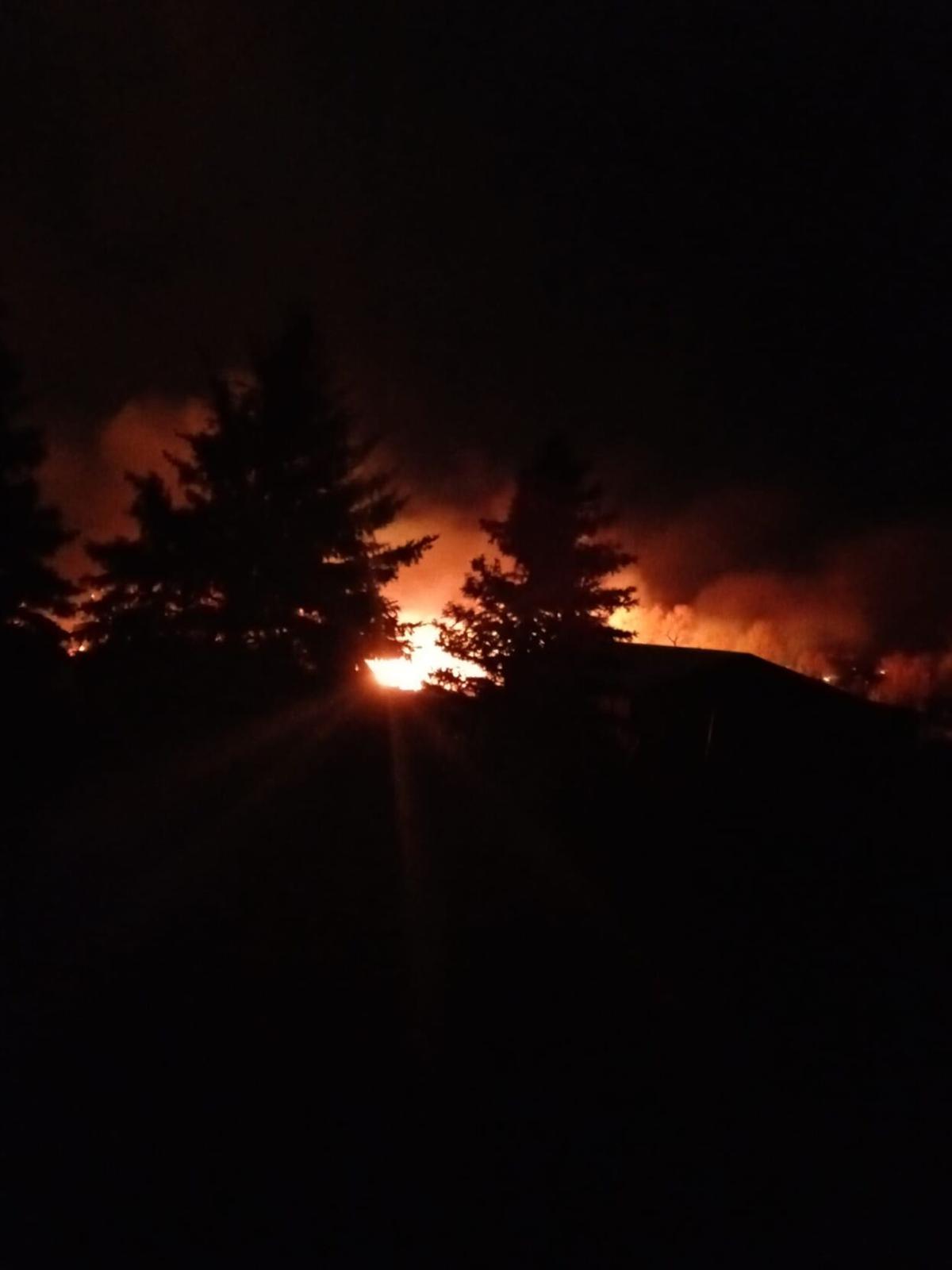 An orange glow filled up the nighttime sky in Clark on Monday night.

Cindy Ruth, 61, holding her grandchild in a 2017 photo, was the wife of Clark volunteer firefighter Jerry Ruth. (Courtesy photo)

A photo taken from the kitchen window of Clark resident James Hayes' residence.

A view of the fire burn that passed by Marcella Bodner's home in Clark.

The area around Line Creek was burned, including a bridge that crossed the riverbed from Gunpowder Drive.

The Gunpowder Drive bridge in Clark was badly damaged in the fire. Crews felled a couple trees across the bridge to deter people from trying to cross it.

An orange glow filled up the nighttime sky in Clark on Monday night.

A wildfire burning in Clark late Monday night claimed the life of one of the area’s volunteer firefighters as high winds led to a quick spread. The grass fire had burned 300 acres as of Wednesday afternoon.

Jerry Ruth, a volunteer firefighter with the Clark Fire District, confirmed he lost his wife Cindy Ruth, 61, in the fire when she died from smoke inhalation on Tuesday.

“She was a very special person,” he said.

“It hits incredibly close to home for our department,” said Kristie Hoffert, medical chief for the Clark Fire District. “We are struggling.”

Jerry Parker, Park County Fire District No. 2 administrator, said crews were still “mopping” up the fire as of early Tuesday afternoon. Mopping is the process of extinguishing residual fire to make sure it doesn’t continue to spread. On Tuesday, he said there were cottonwood trees and structures still smoldering from the flames.

On Tuesday night, a dispatch call was made regarding a previously burned structure that reignited. By Wednesday the fire was 100% contained.

Parker said three homes, seven outbuildings and a bridge on Gunpowder Road were destroyed in the fire that hit the lower Line Creek area, about 5 miles from downtown Clark.

Parker said the fire started around 10:15 p.m. Monday when power lines were blown into a tree.

Hoffert said many more homes and structures would have been lost if it were not for their efforts.

“There was some really amazing work done,” she said. “Many, many volunteers risked their lives to save others last night. Our chief wants to reiterate our thanks to Cody, Powell, and Belfry fire for their amazing work last night. Homes that should have been a total loss were saved. Firefighters raced ahead of the flames to get people out of their homes ahead of the fire. Firefighters helped get residents and their pets loaded in cars with embers falling around them.”

Hoffert said there was a moment during mitigation when the wind direction drastically shifted on fire responders, sending a wall of flames right at them.

“There was fire literally coming up on them,” she said.

Luckily, she said no firefighters were injured.

This fire grew at a much quicker rate than the Robertson Draw Fire that burned near Clark in June. After about 24 hours of burning that fire sat at 200 acres, but this most recent fire reached that same point after less than 12 hours.

Parker said it is not unheard of for fire risks to occur this late into the fall after a dry summer of little moisture.

A downed power line knocked over by the high winds has been determined to be the cause of the fire. Hoffert said the power line fell into a tree near the 800 block of County Road 1AB, arced and sparked into some nearby grass.

A high wind warning had been in place for Clark through mid-day Tuesday.

Hoffert said wind gusts in Clark were reported at more than 100 mph on Monday night.

Most of the fire risks were expected to drop off on Wednesday with much cooler temperatures and wind speeds predicted.

Clark resident James Hayes said he was forced to evacuate his home around 1 a.m., shortly before the fire encircled his home. He spent the night in Cody before returning Tuesday morning to find his property mostly unscathed. He said the 200 feet of feet of tall grass he mowed around his home this summer likely saved it.

Parker said a Code Red evacuation was ordered for Line Creek and surrounding areas including Louis L’Amour Lane and Crossfire Trail, where the primary burning occurred. Hoffert said most of the burning occurred on the north side of Line Creek.

Marcella Bodner, who lives north of Line Creek, said her and her husband first saw the fire around 10:15 p.m. on Monday.

“My husband jumped out of bed so fast, I’ve never seen him jump that fast,” she said with a laugh.

The situation quickly grew serious, she said, as the 60-80 mph winds were blowing the fire in from the west towards their home.

They both started trying to contact their neighbors. One neighbor was skeptical about the risks.

Within a half hour, fire crews told them they had to evacuate their home. They only had space to take four of their six cats and three of their four dogs with them to the shelter set up at the recreation center in Clark.

They were not allowed to return to their home until Tuesday afternoon. To their relief, there was no damage to their property even though the flames traveled past their home to the east, coming within “yards” of their house, Bodner said.

Bodner said there were still hot spots seen in Clark on Tuesday night, but fewer were seen by Wednesday morning. Her home was without internet, TV and phone service as of Wednesday, but still had electricity, she said.

Pamela Hershberger also had a close call with the fire. She and her husband evacuated their home and took this video from outside.

Just as the fire was approaching her home she said it started to rain, answering the prayers she had been making to God.

"We are blessed," she said.

The Clark Rec Center offered a free dinner on Tuesday and is accepting donations for fire victims.

Park County Fire District sent out a recorded phone alert about the fire on Tuesday.

Red Lodge Fire is warning people to stay away from downed power lines and to call Northwest Energy or Beartooth Electric to report them in the Clark area.

A county radio transmitter in Clark was picked up and smashed due to the high winds. Mike Conners, Park County chief information officer, said it does not appear the loss of this device impacted any communication during the fire response.

As of Wednesday afternoon, Parker reported the Clark Fire District was the only fire crew still working on the fire, breaking up a large manure pile.

Another large fire has been reported in the Roscoe/West Rosebud area in southern Montana. Evacuations have been ordered in this area as well.