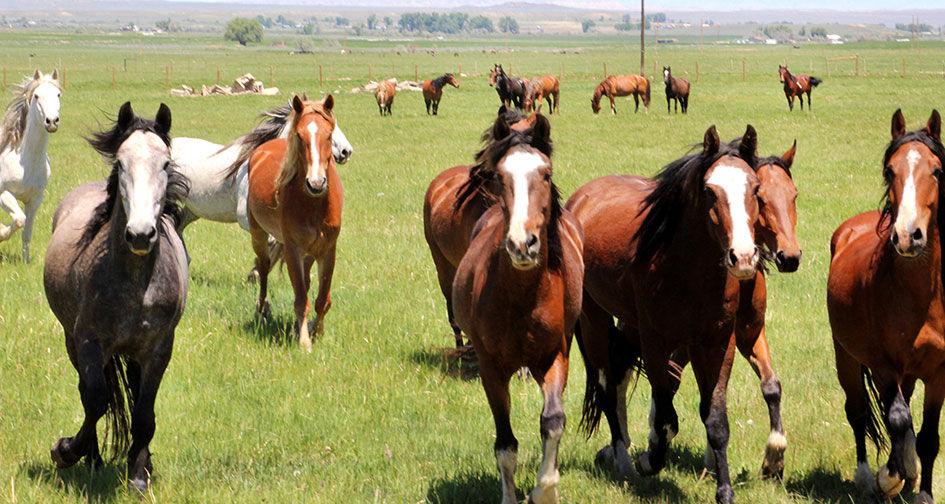 Wild horses run free at the Double D Ranch in Lander on the newest Bureau of Land Management eco-sanctuary, one of three in the United States. 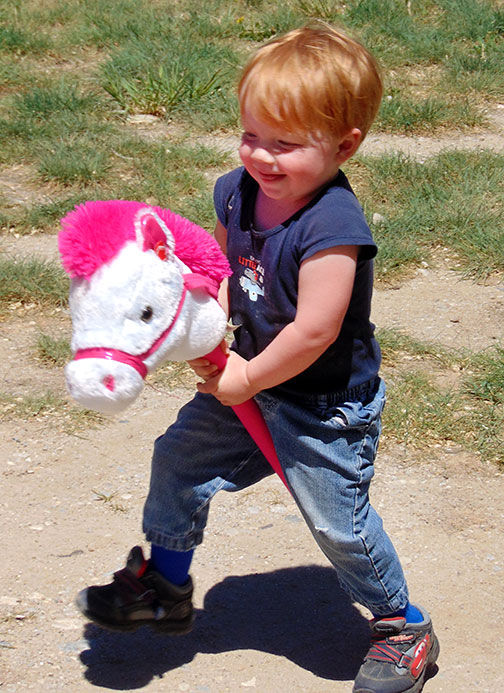 Enoch Guertin, 2, of Lander, rides a stick horse at the new eco-sanctuary.

Wild horses run free at the Double D Ranch in Lander on the newest Bureau of Land Management eco-sanctuary, one of three in the United States.

Enoch Guertin, 2, of Lander, rides a stick horse at the new eco-sanctuary.

LANDER – The gray horse with the black mane led the herd at full gallop straight towards the back of a hay wagon.

They were white, black, brown, gray, all colors represented in the 127-strong herd.

Running wild, they ran dead ahead until the leader turned them. Strung out in a line the horses decorated the scenery. When they stopped, chest muscles heaving, they bent and munched the tall grass, eating their fill.

The mustangs did not realize they were Exhibit A in a museum display, representatives of their species being shown off to the curious.

Under a glorious blue sky last Saturday the horses were unveiled to the public at the third Bureau of Land Management eco-sanctuary in the United States.

They were the new tenants at the Double D Ranch seven miles outside of Lander, rent-free residents at their retirement home.

“The grass is green, the horses are happy and healthy,” said Rick Vander Voet, the BLM field manager in Lander. “This is three years in the making.”

Even amongst the three eco-sanctuaries, the others being the Deerwood Ranch near Centennial, Wyo., and the Mowdy Ranch near Colgate, Okla., this new one is unique because of its location on the Wind River Indian Reservation.

Here a visitors center tells the story of the relationship between the horse and Native Americans.

Also, with great enthusiasm, the facility is being embraced by the Wind River Visitors Council as a new tourist attraction and by officials as a place offering employment to Native American youths.

“Just out of Lander and right on the highway (287) you can have a great experience,” said Paula McCormick of the council. “They (tourists) will get a quality experience they can’t get at Yellowstone or Grand Teton. Nobody else has it.”

BLM authorities can only wish there were another 50 or so landowners like ranch owner Dwayne Oldham at the ready. If so, the BLM’s management of the 55,000 wild horses and 11,700 wild burros in 10 western states spread around 177 herd management areas would be under control.

However, not only are there few Oldhams, there seem to be fewer individuals game to adopt a wild horse and make it their very own at the same time that the population of the wild animals is mushrooming.

These wild horses can live 30 years, they grow to about 800 pounds and they need pasture land.

While in late May there was a very successful Wyoming adoption of 31 out of 35 available horses, it seems the harder BLM employees try, the fewer adoptions occur.

“The price of hay is up,” said Scott Fleur, the BLM’s national supervisor of the wild horse program who lives in Lander. “So is fuel. And a horse lives a long time.”

In a sense 2015 was the year of the wild horse across the U.S. The award-winning documentary “Unbranded” featured a Mexico-to-Canada horseback journey by four young men who assisted in their training by Cody’s Val Geissler before departure.

The film received rave reviews and filled the movie house in Cody for charitable causes.

One goal of the film-makers was to update the public on the issues surrounding the mustangs roaming western lands. Fleur, who consulted with the riders ahead of time, believes the movie raised awareness.”

The opening ceremony at the 900-acre Lander eco-sanctuary took a little bite out of a problem with many moving parts.

The new display center opened. Visitors can take wagon rides into the field to see the horses as close up as the horses wish to be seen.

A ribbon cutting was briefly stymied when Dwayne Oldham sought to snip the purple tape with rusty sheep shears. Daughter Odessa, one of the four family children between 24 and 31 who will work at the facility over the summer, rescued the situation with a pocket knife slice.

Still, it was appropriate the shears were tried because mom Denise, of Navajo descent, said that while Dwayne always has worked with horses, at least seven generations of her brethren were sheep herders.

Fleur said nine of Wyoming’s 16 herd management areas are in the Wind River area, so when the bureau advertised for someone willing to join in a private-federal partnership it was logical to select a place in the region.

“There wasn’t a stampede,” Fleur said, using a horse metaphor to note that not many people applied.

The appeal of explaining the Native-American-horse connection, of turning the sanctuary into a tourism-education site, and its location on a main road that drivers might take to Yellowstone National Park, worked in favor of the Oldhams.

Inside the welcome building are storytelling placards illustrated with old black and white photos of Native Americans riding horses or in encampments.

The pictures were gathered from area museums, plus the Wyoming State Archives by Melissa Hemken after she wrote a grant application to fund it.

The introduction of horses to North America by Spaniards in the early 1500s and the tribes’ immediate attraction to them is explored.

“That’s what the display focuses on,” Hemken said.

Most Native materials represent the Shoshone and Northern Arapaho since this is their territory, but other tribes were included as needed.

A second, expanded, phase of the visitors center is planned, provided Hemken can raise more money from another grant.

One point made in “Unbranded” is how wild horses can be trained as pack horses. That’s not going to happen with the geldings at the Double D, who were forsaken at adoption.

However, one horse, now named Albert, was plucked from the crowd by Tasha Lookingbill, 16, a Wind River High School junior. After she broke him of what she called lazy habits, Albert has joined Lookingbill as a County Fair and State Fair participant in English show jumping.

As the partners rode, “Let There Be Cowgirls” played.

“He fell asleep,” she said.

Since 1971 it has been the Bureau of Land Management’s charge under Congressional mandate to manage wild horses and burros.

The enabling legislation, called the Wild Free-Roaming Horses and Burros Act, was passed because of concern about the number of wild horses and burros getting out of control on the open range in the west, including in Wyoming.

Some 4,000 horses have been adopted through the Honor Farm inmate training program in Riverton.

The BLM has calculated an optimum appropriate number of roaming horses for their own good and for the land’s own good. The so-called appropriate management level is set at 26,716, far below existing herd sizes.

The Double D Ranch is allowed to have up to 150 horses. The facility near Centennial holds 300. The Oklahoma location has 153.

Clearly, the total at the eco-sanctuaries makes little dent in the overall population. That is why BLM officials keep searching for other solutions, including birth control.

This program is underway near Cody with the McCullough Peaks wild herd. Periodically, some horses are darted and receive a vaccine dose of Porcine Zona Pullucida, or PZP.

However, birth control cannot be applied everywhere mustangs roam. It is best used when a herd lives in a more confined space with a limited number of watering holes where it can gather.

“The challenge comes on these large land areas when you don’t even see the horses,” Fleur said.

That is not a problem at the Double D. The line to ride wagons into the pasture to admire the mustangs on opening day never seemed to shrink. Wagon after wagon pulled by draught horses slowly carried a dozen onlookers at a time to the spaces where the horses ran free.

These horses were as lucky as any of their thousands of their wild cousins, some on the loose on range land, some awaiting adoption.

Still, while the big-picture problem remains, this was a feel-good day at the Double D Ranch for these wild horses now set for life.