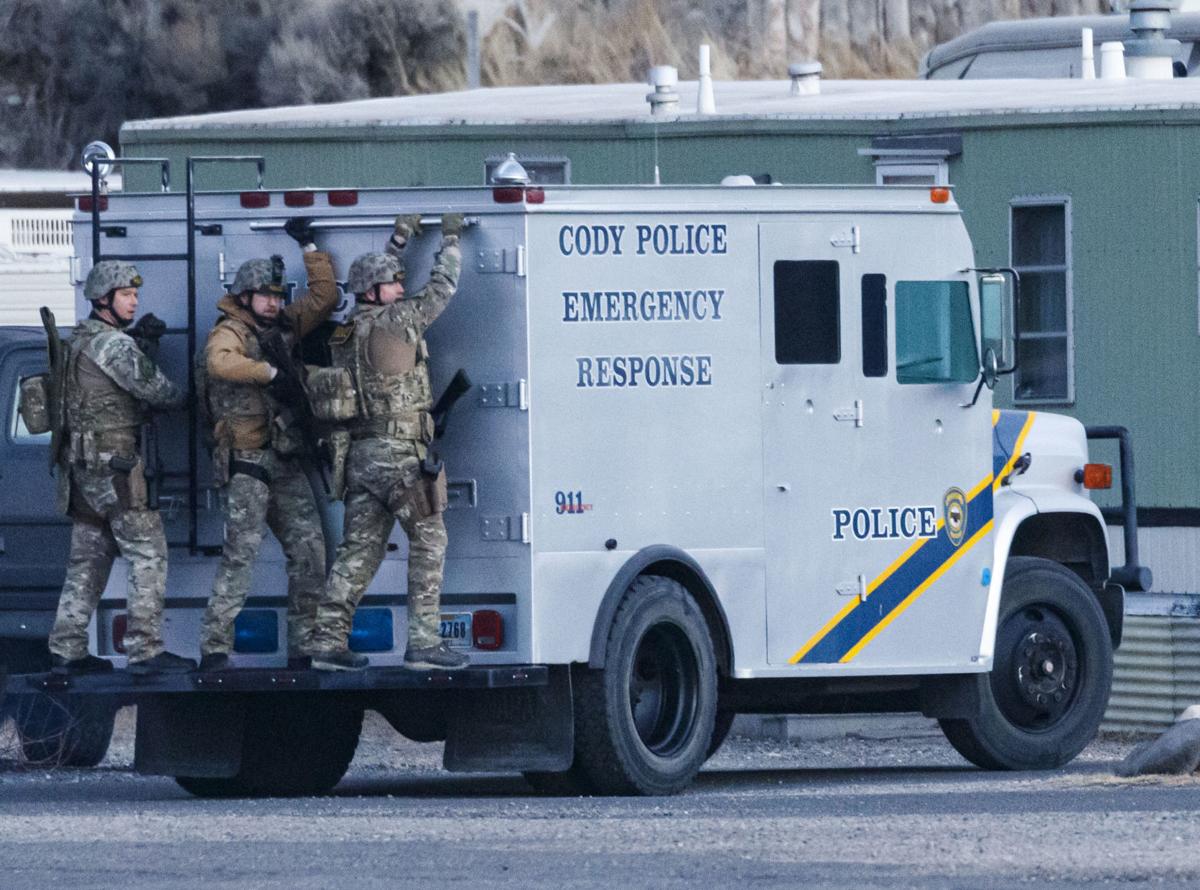 Members of the Cody Tactical Response Team, including (from left) Josh Van Auken, Seth Horn and John Harris ride to a position near the suspect’s camper during a standoff Monday afternoon at the Parkway RV Campground and Trailer Village in Cody. 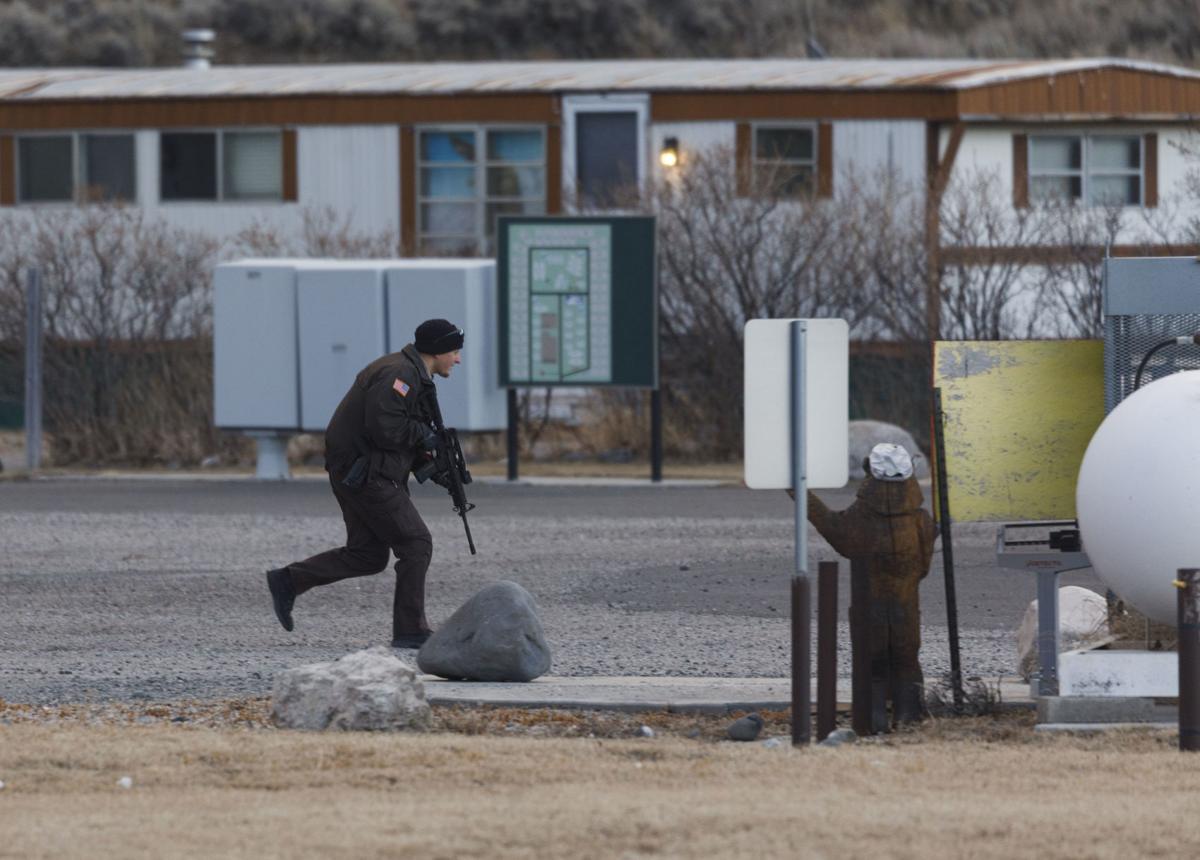 Park County Sheriff’s Deputy Clayton Creel runs with rifle drawn toward a police vehicle parked next to the camper. 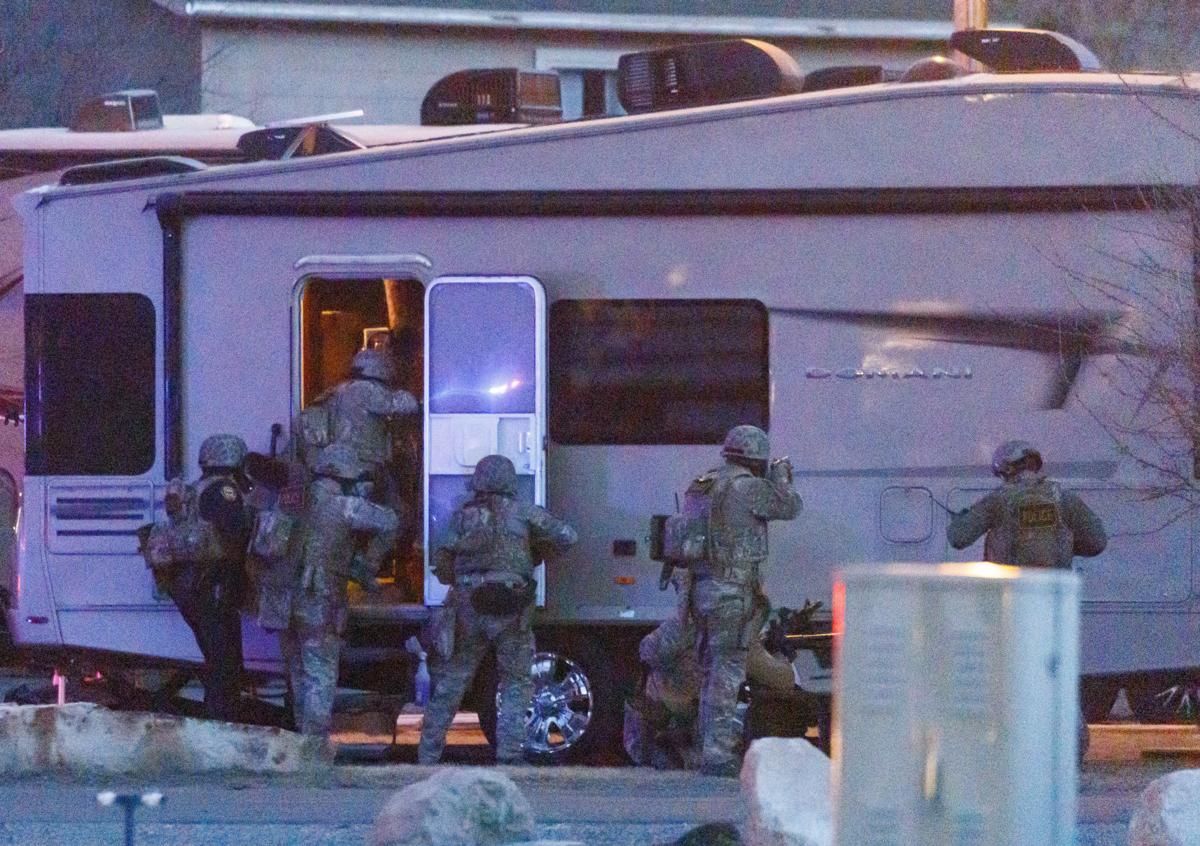 Tactical Response Team members enter the camper toward the end of the incident. 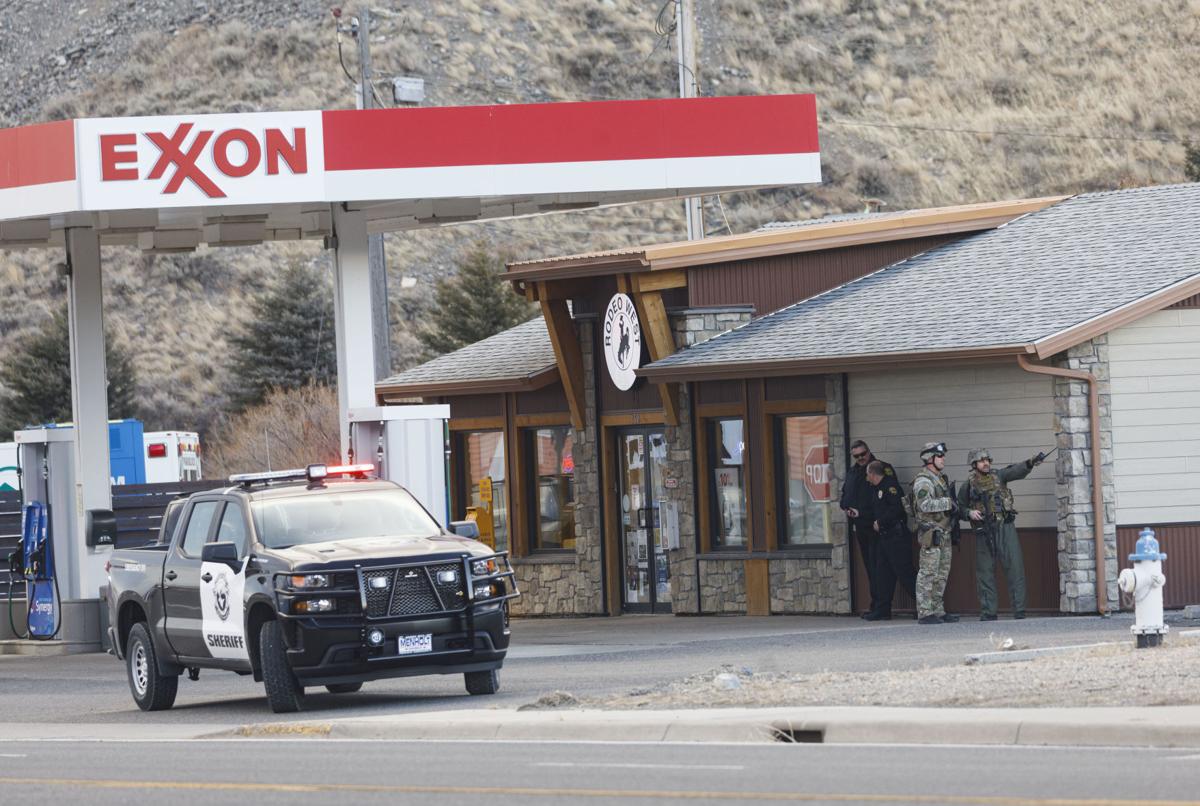 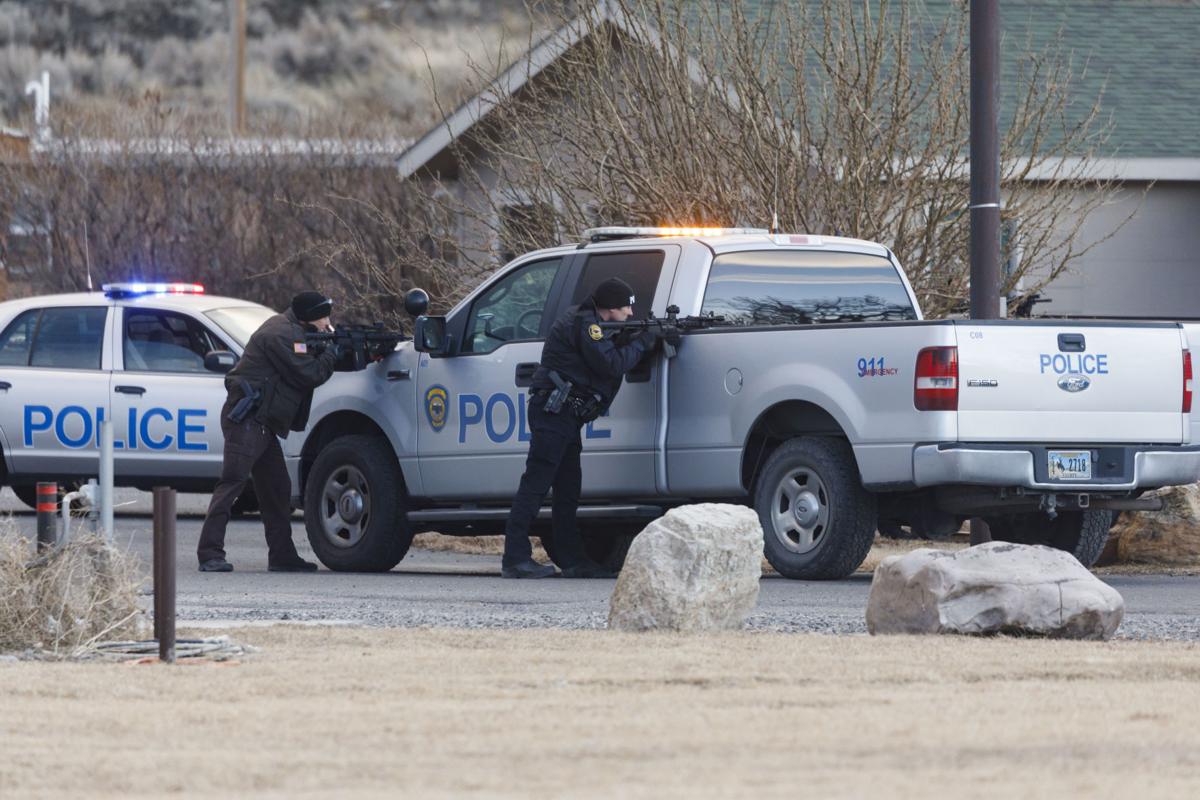 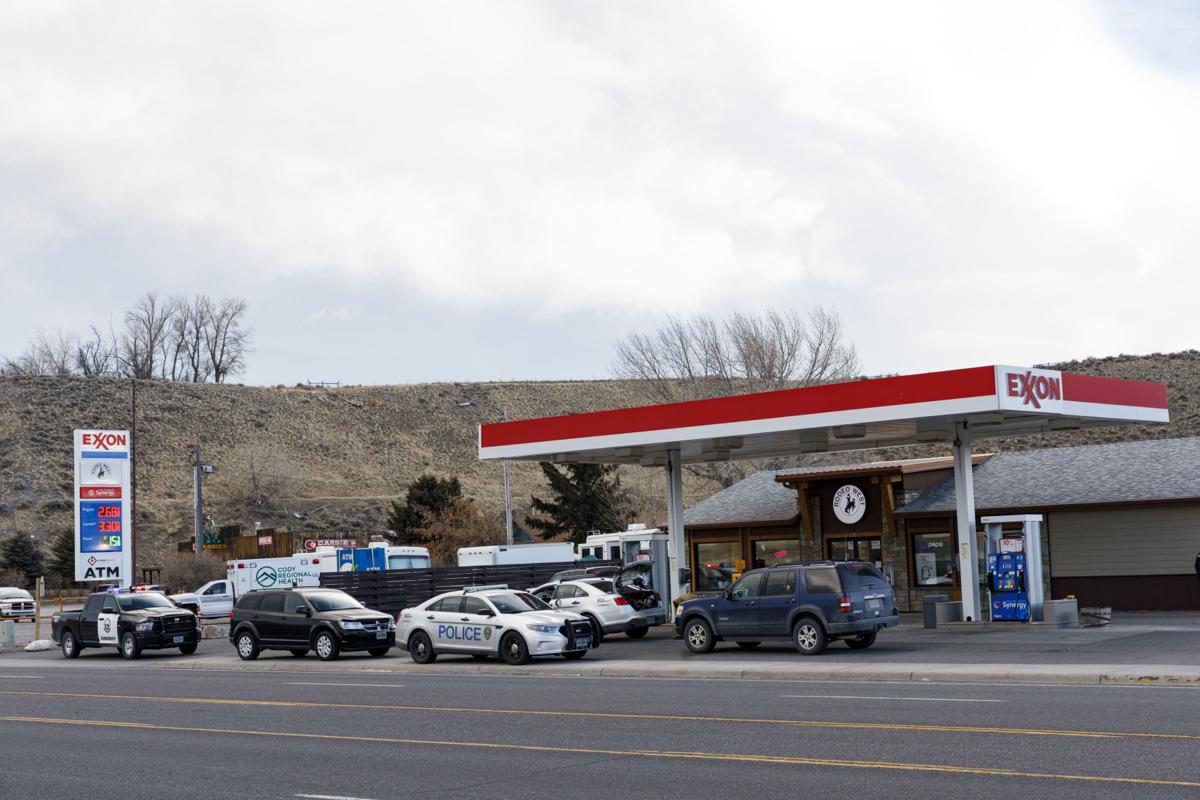 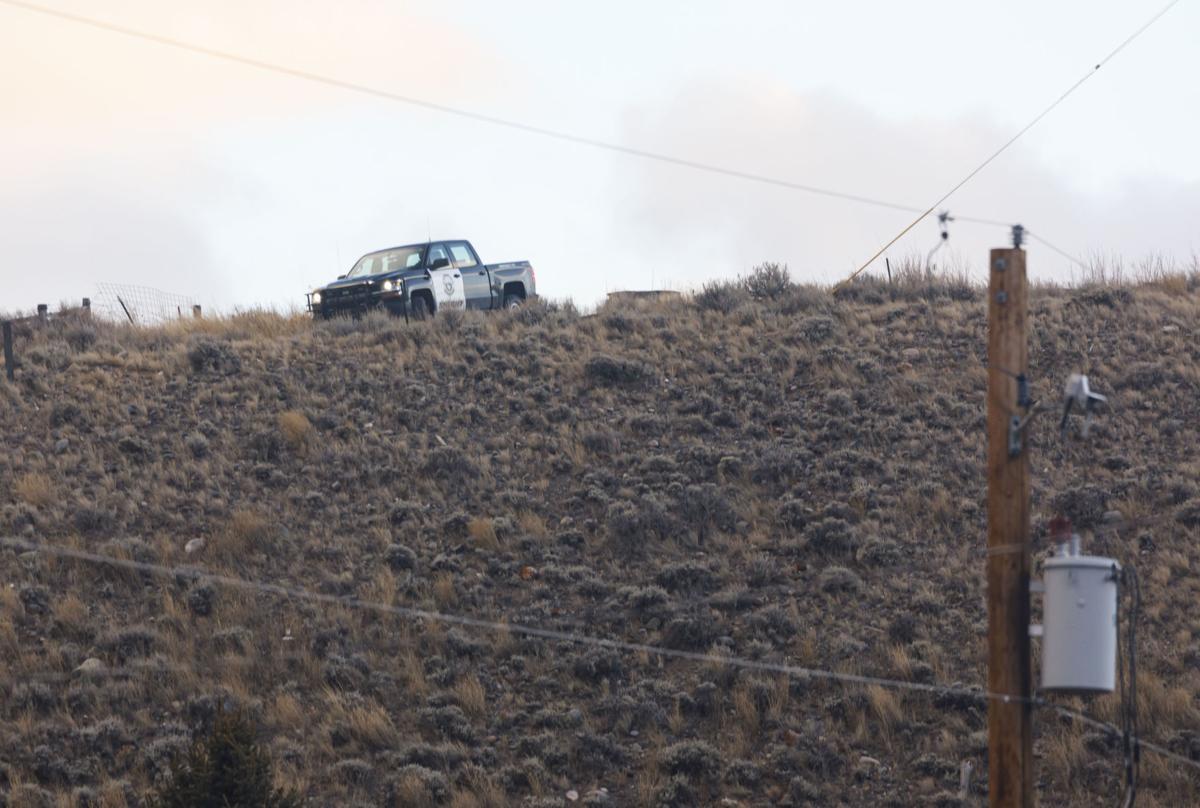 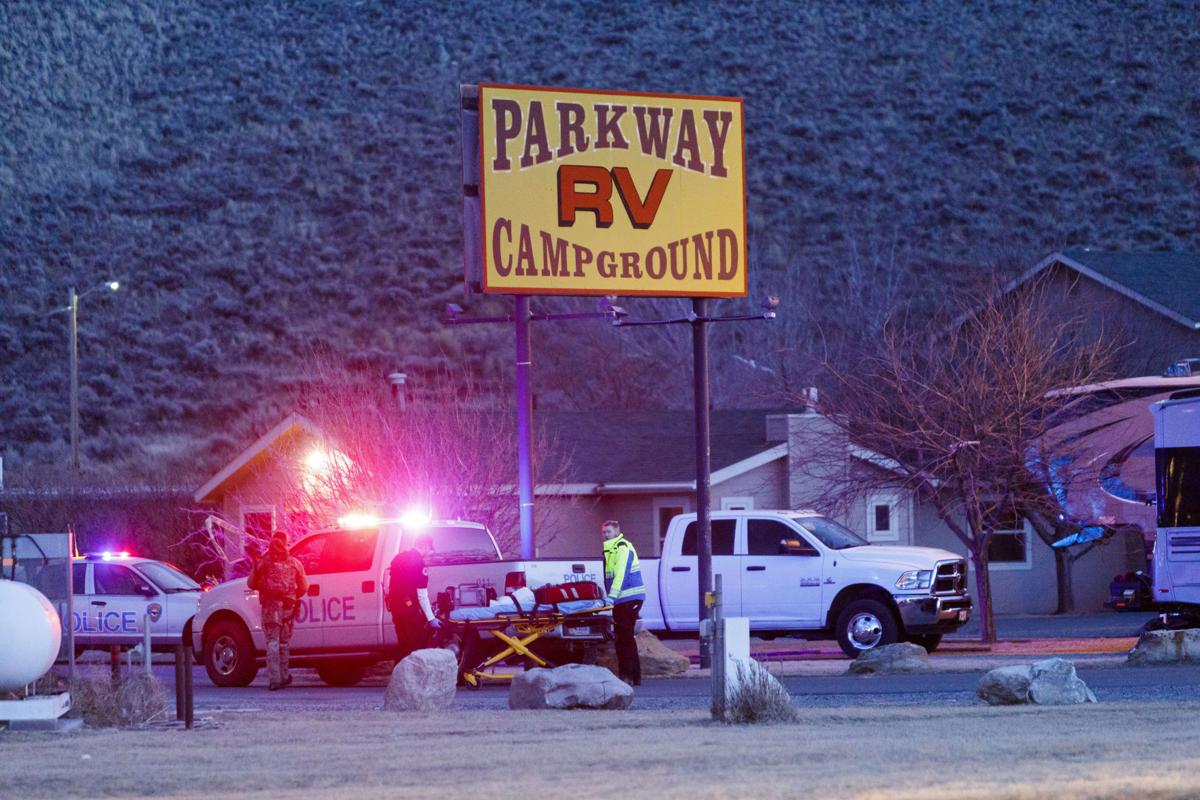 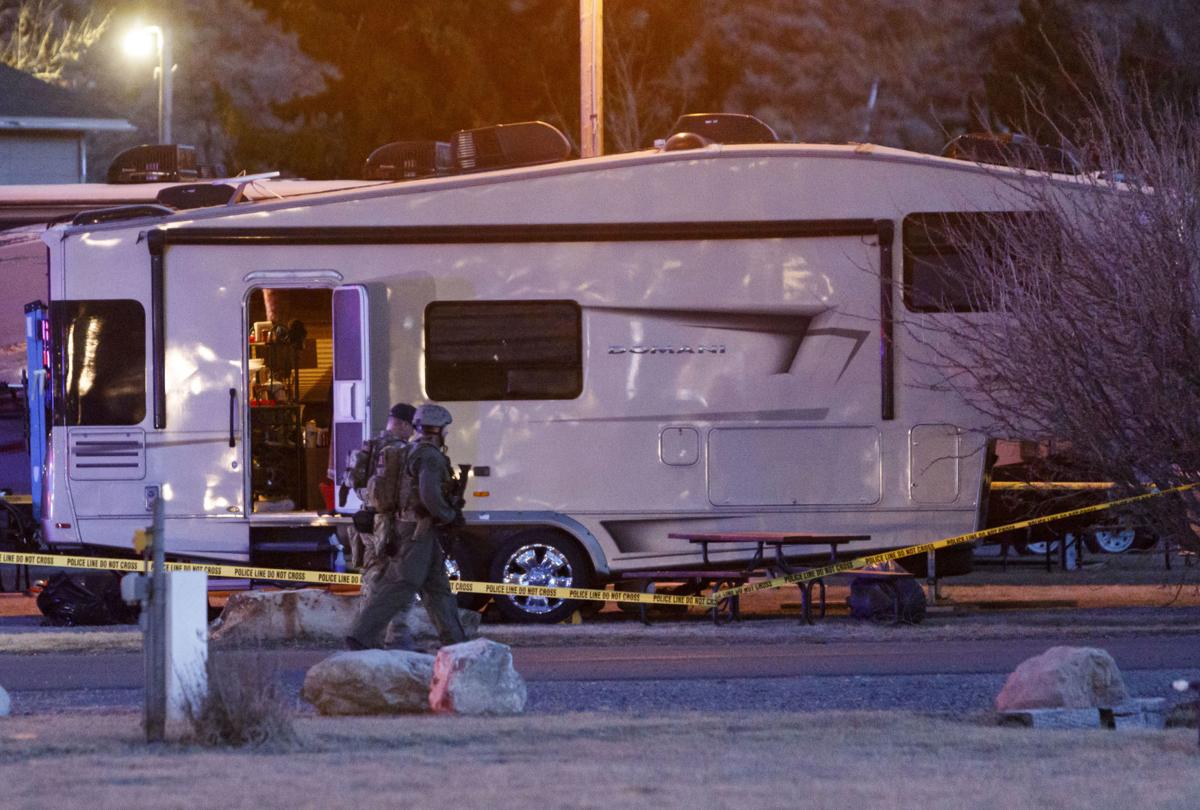 Members of the Cody Tactical Response Team, including (from left) Josh Van Auken, Seth Horn and John Harris ride to a position near the suspect’s camper during a standoff Monday afternoon at the Parkway RV Campground and Trailer Village in Cody.

Park County Sheriff’s Deputy Clayton Creel runs with rifle drawn toward a police vehicle parked next to the camper.

Tactical Response Team members enter the camper toward the end of the incident.

A standoff involving Cody police and Park County deputies ended around 5:30 p.m. Monday when authorities in tactical gear entered a camper where a 76-year-old man had shot and killed himself after shooting a woman in the head, according to the Cody Police Department.

The woman, his 44-year-old girlfriend, suffered nonlife-threatening injuries and was taken to the West Park Hospital Emergency Department.

According to multiple sources and the owner of Parkway RV Campground and Trailer Village where the event happened, that man was Leon “Wayne” Carter. Police had not released the name of either the suspect or victim as of noon Wednesday.

For roughly two hours Monday authorities, some with the Tactical Response Team carrying rifles and full tactical gear, had surrounded a fifth-wheel camper parked in the Parkway RV Campground and Trailer Village. At one point an officer fired several rounds from a specialized 40 mm shot launcher of a less-lethal, nonburning frangible projectile filled with a gas used to dislodge barricaded subjects.

Officers quickly moved toward the camper in groups and then backpedaled behind the Tactical Response vehicle. At one point an officer smashed out the back window of the camper, presumably to gain access. Officers never discharged their firearms.

Later, authorities tried to talk to Carter in the trailer with a megaphone and a bomb robot was also used.

The call came in at 3:29 p.m. when an ambulance responded to a 44-year-old woman with a head injury.

The female was able to leave the camper and sought help at the Exxon Rodeo West gas station. She told officers she was shot in the head by her boyfriend during an argument in their camper, which was in the RV park behind the gas station.

Rodeo West cashier Christina West said the woman had been shot in the ear. Police have not confirmed the victim’s exact injuries.

Carter followed the female to the gas station, but apparently returned to the camper as law enforcement arrived.

Soon after a second ambulance was called to the scene along with more law enforcement.

Officers then went to the camper. As they approached, an officer heard what sounded like a single gunshot coming from inside the camper. Police and Park County Sheriff’s deputies secured the immediate area and the Cody Police Tactical Response Team were called to respond.

Jarrod Johnson had a front row view of the incident from his trailer next door.

After going outside to see what was going on, an officer told him, “everything is not all right,” and instructed him to go back inside. He captured video of the officers shooting the less-lethal “Ferret Rounds” into the camper.

“A lot of people told me I should’ve been in the back of the house or in a bathtub,” Johnson said later.

Multiple attempts to make contact with Carter were unsuccessful. With the assistance of the Cody Bomb Team, a specialized robot was deployed into the camper and the male suspect was found deceased from an apparent self-inflicted gunshot wound.

An autopsy was performed Wednesday morning on Carter by Forensic Pathologist Thomas Bennet in Basin, whose preliminary conclusion was the lethal injury was consistent with it being self-inflicted.

“This wasn’t him,” his friend and co-worker Angela Berkshire said of her reaction when she heard what happened. “He was a very sweet guy.”

Berkshire knew Carter and his late longtime companion Gwen Antrobus, as the couple had spent their summers working housekeeping together at the Buffalo Bill Village cabins. She said he was most typically addressed as “Carter” or “Wayne.”

Parkway owner Andy Syring and Berkshire said Carter was a Texas resident. He moved into the short-term campground in early October after he finished up working at the cabins for the summer, Berkshire said.

Syring said Carter had recently informed him he would be moving out in about a week. Besides paying rent a little late in the last month, Syring said he saw nothing out of the ordinary from Carter.

“He was a nice, easy-going guy,” Syring said.

Johnson said he had only positive encounters with Carter. Berkshire agreed, describing him as a “southern gentleman.”

“He always held the door, always called me m’am,” she said.

Antrobus passed away in November 2018. Berkshire said she saw no change in Carter following her death, only that he became noticeably saddened when talking about her.

“I didn’t see this path at all,” Berkshire said. “He didn’t indicate anything.”

Little is known about Carter’s new girlfriend who was the victim of the shooting.

Andy Syring’s wife Diane was just coming home as the incident was occurring. He said police stopped her before she could enter their office, and told her to go into the gas station nearby.

It was here officers set up a headquarters during the standoff, with Chief Chuck Baker seen walking the perimeter. Syring said his wife got first-hand insight of what was going on.

“They said, ‘We’re going to breach,’ and then, ‘OK they’re breaching,’” Syring said.

Cody resident John Justice was sitting with Michaela Osborne in an F-150 across Yellowstone Avenue from the gas station and said he had initially pulled up to the gas station just as police were flooding in. He said he heard a man had shot the woman and was in the trailer.

He stayed to watch from across the street because his grandmother lived in one of the trailers and he wanted to make sure she was safe.

“This isn’t something that happens in Cody,” Osborne added. “Stuff like this does not happen.”

The incident drew numerous onlookers who parked in surrounding parking lots and across the street to watch events unfold.

“It was crazy,” Johnson said. “I always brag about how that trailer court is really nice. It was so out of the ordinary.”

Johnson and Syring both expressed gratitude for the way Cody police handled the situation.

“They were very concerned about the safety of the tenants and us,” Syring said. “They showed up on our roads and I was very impressed by their professionalism.”

That's really scary, glad to hear the victim is okay.

Awful nice to have a trained, tactical effort when something like this occurs. Great picture with the article.