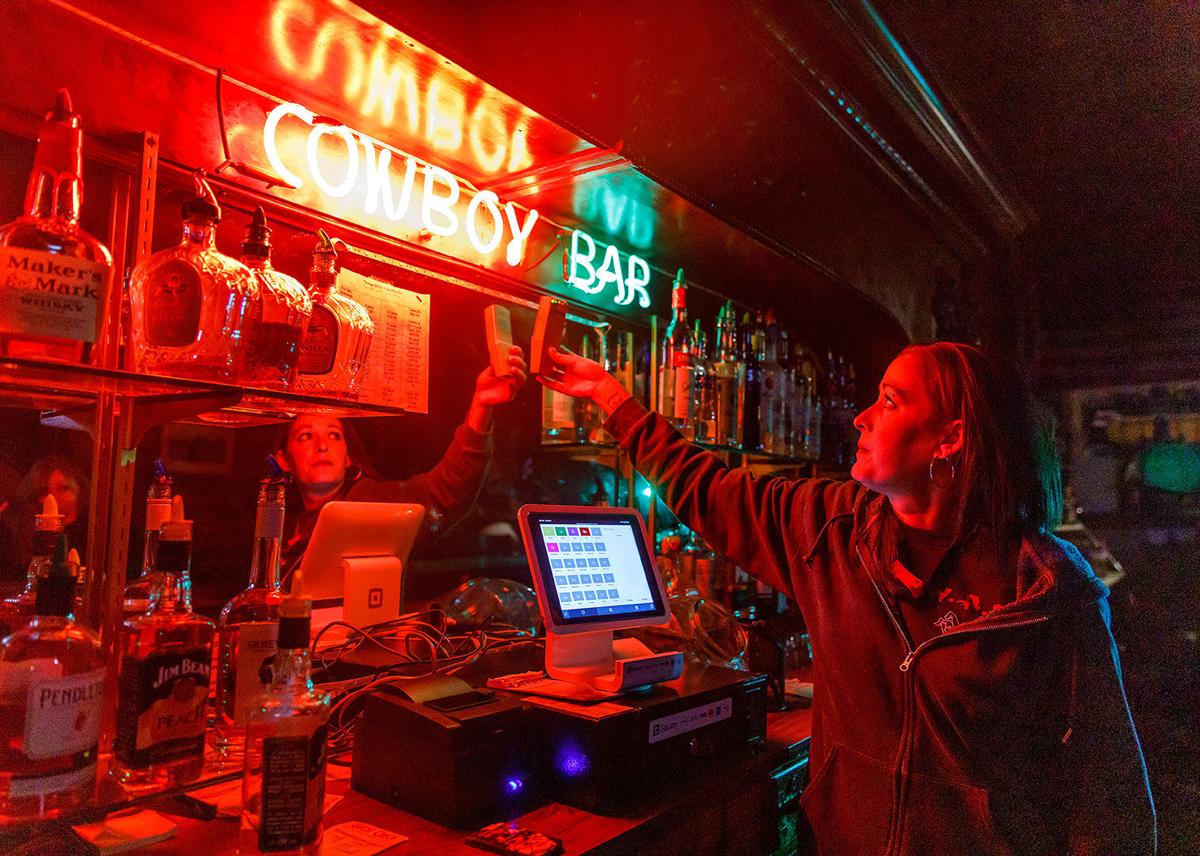 Kara McCoy with the Wyoming Area Spirit Posse takes a K2-EMF Detector around the Cowboy Bar in Meeteetse during a paranormal investigation on Tuesday. The K2-EMF Detector picks up electronic flow that in theory helps detect potential spirits. 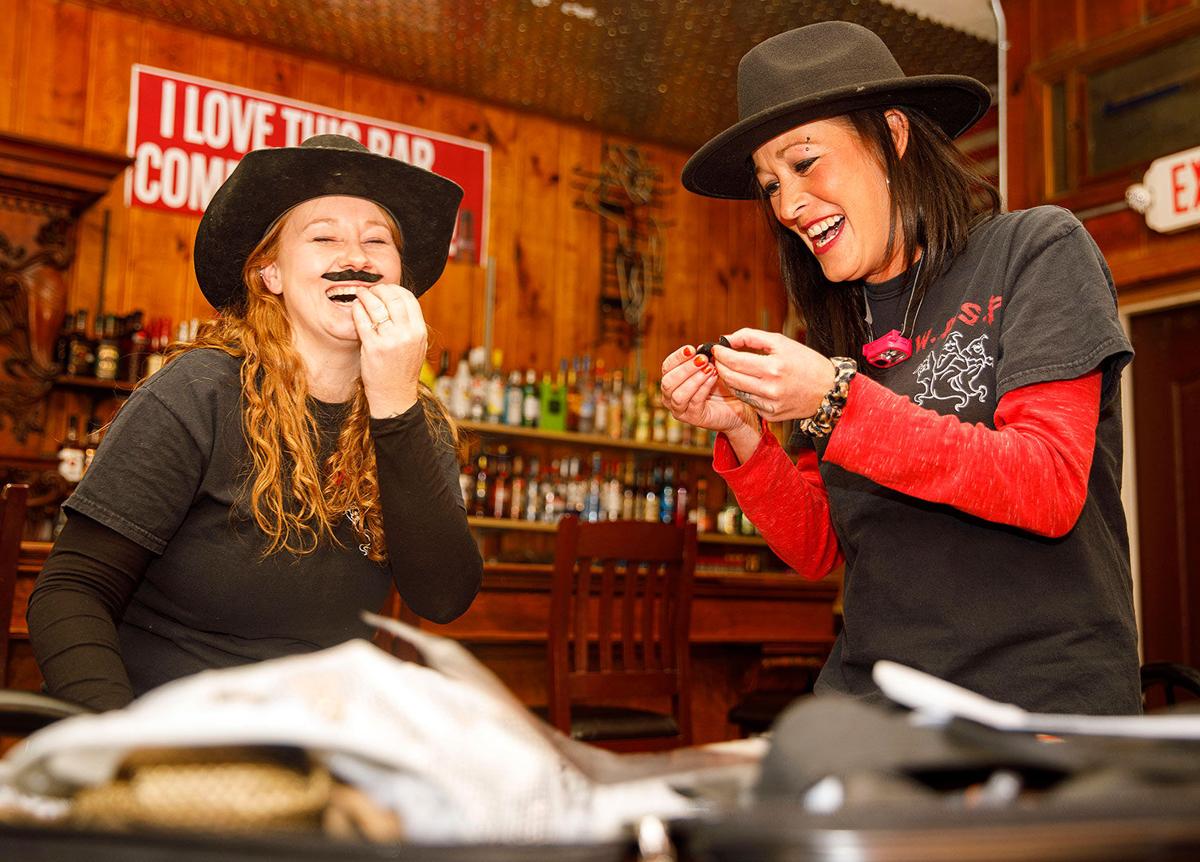 Tami Currie (from left) and Kara McCoy from the Wyoming Area Spirit Posse put on fake mustaches and hats before a reenactment at the Cowboy Bar in Meeteetse during a paranormal investigation on Tuesday. The Wyoming Area Spirit Posse does reenactments in hopes of triggering potential spirits by recreating scenes that might have been similar to their life or time period.

Kara McCoy with the Wyoming Area Spirit Posse takes a K2-EMF Detector around the Cowboy Bar in Meeteetse during a paranormal investigation on Tuesday. The K2-EMF Detector picks up electronic flow that in theory helps detect potential spirits.

Tami Currie (from left) and Kara McCoy from the Wyoming Area Spirit Posse put on fake mustaches and hats before a reenactment at the Cowboy Bar in Meeteetse during a paranormal investigation on Tuesday. The Wyoming Area Spirit Posse does reenactments in hopes of triggering potential spirits by recreating scenes that might have been similar to their life or time period.

Kara McCoy was having problems with her moustache. It wouldn’t stay on her face.

“I don’t know how men deal with these,” she says, wrinkling her nose.

It was part of the routine of the Wyoming Area Spirit Posse. McCoy is half of the ghost hunting team checking Meeteetse’s Cowboy Bar for signs of the supernatural.

The posse dresses up in period-adjacent attire (in this case, including false facial hair) and brings “trigger objects” to the sites of their paranormal investigations, hoping to entice spirits with things and sights familiar to them from their time among the living.

“We’re looking for anything – spirits, ghosts, the flesh-impaired, as Kara and I like to joke,” says Tami Currie, the other half of the posse.

Understanding the history of the places they investigate is part of the job, and the Cowboy Bar’s history is rich. Frequented by the rough and tumble of the Wild West, it’s been the home of funerals, shootouts, and plenty of sightings of apparitions.

At one point, Meeteetse was a major hub in the Big Horn Basin. Currie says in the 1890s the population was over 1,800 and there were more brothels than banks in the city limits, in part because there was no law enforcement. Over the decades, the Cowboy Bar was frequented by the famous and the infamous, including Butch Cassidy, Amelia Earhart and local outlaw Earl Durand. Tucked away above the bar a noose hangs, once used to hang a cattle rustler.

McCoy throws open the saloon doors and walks up to the bar, asking for some “Florida Milk,” apparently a code term used by bootleggers and lushes alike during Prohibition to get some of the good stuff at their local speakeasies, including the Cowboy Bar.

“I think you’ve had enough,” Currie says, playing the role of the ever-gruff bartender.

“I’ll decide when I’ve had enough,” McCoy retorts, placing a toy pistol on the bartop with all too clear an intent.

They crack up at the bit. Currie and McCoy try to keep their enactments lighthearted, but also just can’t help themselves.

“It kind of feels like we’re bringing life into that era,” Currie says. “But we also like to have a lot of fun.”

Currie’s husband Justin starts talking about some of the historical figures who have made pit stops at the bar. A device at the other end of the room lights up and jingles when he says, “Butch Cassidy.”

McCoy springs into action, running an electromagnetic field detector around the device, searching for electrical activity. The noise stops almost as soon as it starts. The field detector comes up empty. Currie starts a recording, asking questions that span the history of the bar, about Florida Milk, about Cassidy, about Durand. Nothing happens – until she plays it back.

“Earl Durand? I heard you robbed a bank in Powell,” Currie says on the recording, now amplified on a small speaker.

There’s a pause, nothing, then a man’s voice whispering two words: “Sounds familiar.”

Two of a kind

Currie and McCoy met at a chocolate party in 2013. WASP started soon after with six members, dwindling down to two – and right now, they’re not looking to bolster their ranks. The duo is a well-oiled paranormal hunting machine.

“Sometimes, we freak people out because we don’t say anything,” McCoy says. “It’s just instinct.”

They’ve parlayed those instincts into a YouTube channel (Wyoming Area Spirit Posse) with some minor success and so many investigations they’ve lost track of how many they’ve done.

Their hobby, or calling, depending on which ghost hunter you ask, has taken them all over the West, mostly in Wyoming and Montana but also to Utah and Nevada. McCoy has also done an investigation in Detroit.

Even though several hours now keep them apart, it’s hard to separate them. Searching for the supernatural may bring them together, but their bond goes beyond ghouls and ghosts.

“We’ve also been through some really hard times,” McCoy says. “When we first started, we were both married. Both marriages went terribly bad. But we had each other.”

Their lives have since branched out. McCoy now lives in Montana, and Currie married again and moved to Meeteetse. But they still meet to sate a curiosity, a need to know more.

“I’ve always been interested, I don’t even know why,” Currie says. “I had strange occurrences as a kid, with my brother’s toys going off randomly in the middle of the night, things appearing where they shouldn’t be.”

The possibilities were endless, and when the opportunity arose to check for the paranormal in a cemetery, Currie jumped at the chance.

“I said, ‘What are we waiting for? Let’s go.’ That ignited a fire that has never died,” Currie says.

For McCoy, it was more about pairing history with the search for the unexplained.

“My grandparents were always into antiques,” she says. “I remember just being little and being like, ‘Oh, that has a story. What’s the story? What’s the story?’ I just never let go of that… Then, having lifetime tragedies happen and seeing things, it just kind of built from there.”

There may be no one more skeptical of the work of the Posse than the Posse themselves. They constantly check each other on the things they observe and question what they see and hear. Research on the supernatural is imperfect. They welcome skepticism and don’t care for self-proclaimed experts.

“The paranormal, we don’t know what it is,” Currie says. “So if you’re claiming to be an expert in a field that doesn’t even actually exist yet? I don’t believe that’s true. How can you be an expert about something that’s constantly changing?”

“We’re continuously collecting evidence,” McCoy says, “but it’s not something you can really prove.”

Investigation techniques are different for every ghost hunter, and the Posse says not every technique works in every situation. Some spirits, they say, are scared off by bright lights from their machines, others by the loud noises.

In the back room of the Cowboy Bar, an app flipped through channels searching for words. Somehow, a spirit was supposed to be able to strengthen a broadcast signal and the app would pull the words from thin air.

Disembodied. Samuel. Shining. Victoria. Alexis. The words flashed on the screen at random times. Some seemed to be connected. Then, a phrase.

They didn’t, at least not that Tuesday night. But for these two, the search will go on.

And folks still refuse to believe that lock-downs have created nuttiness among some people.

Actually they’ve been doing this since 2013, long before the lockdown, read the article.

A great article that had nothing to do with Politics or Covid. Need more stories like these, and well written.

I agree! Nicely written, good photos, fun people and topic! Articles like this add value to your paper.