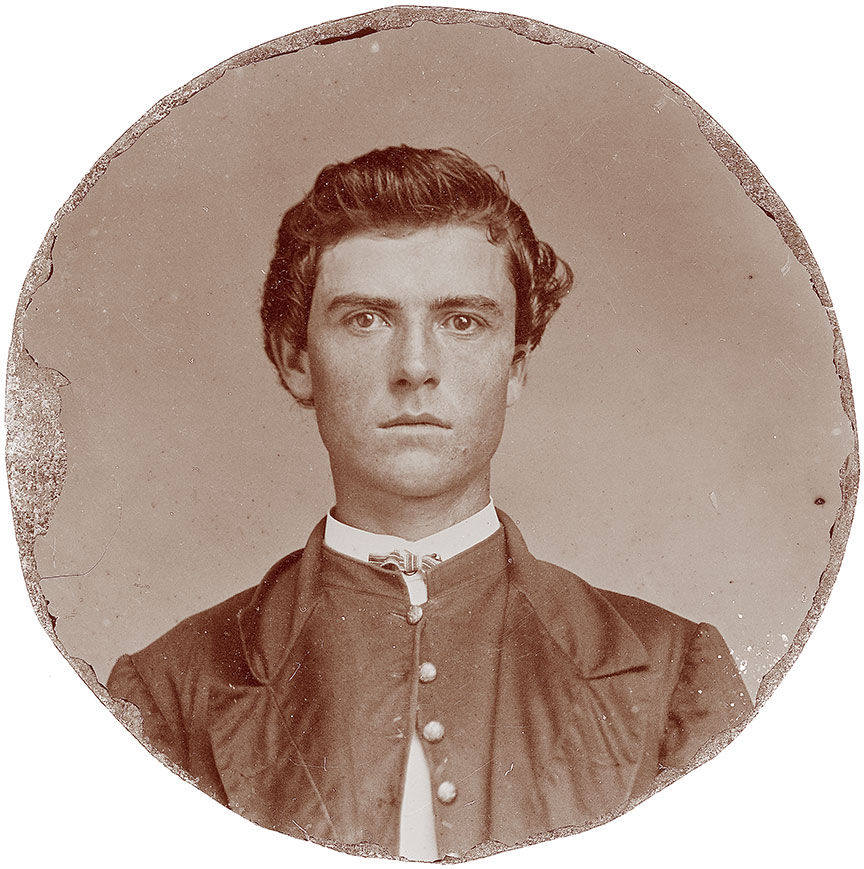 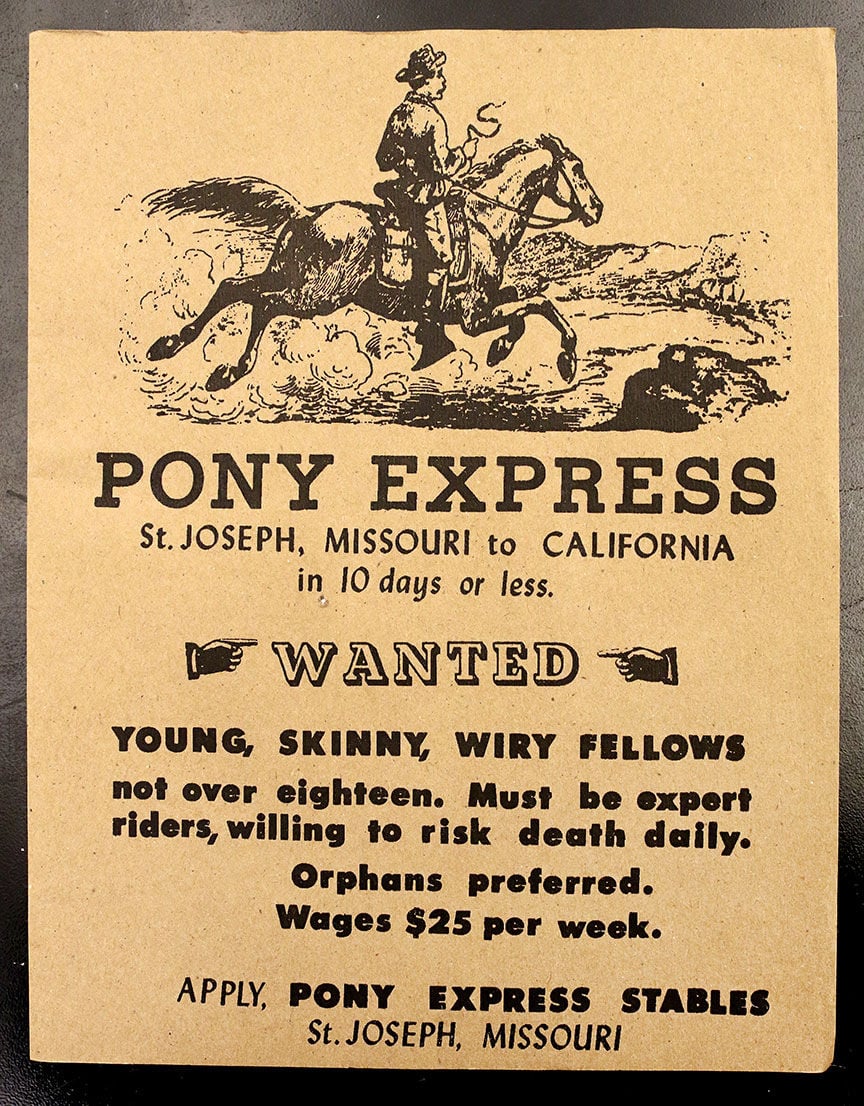 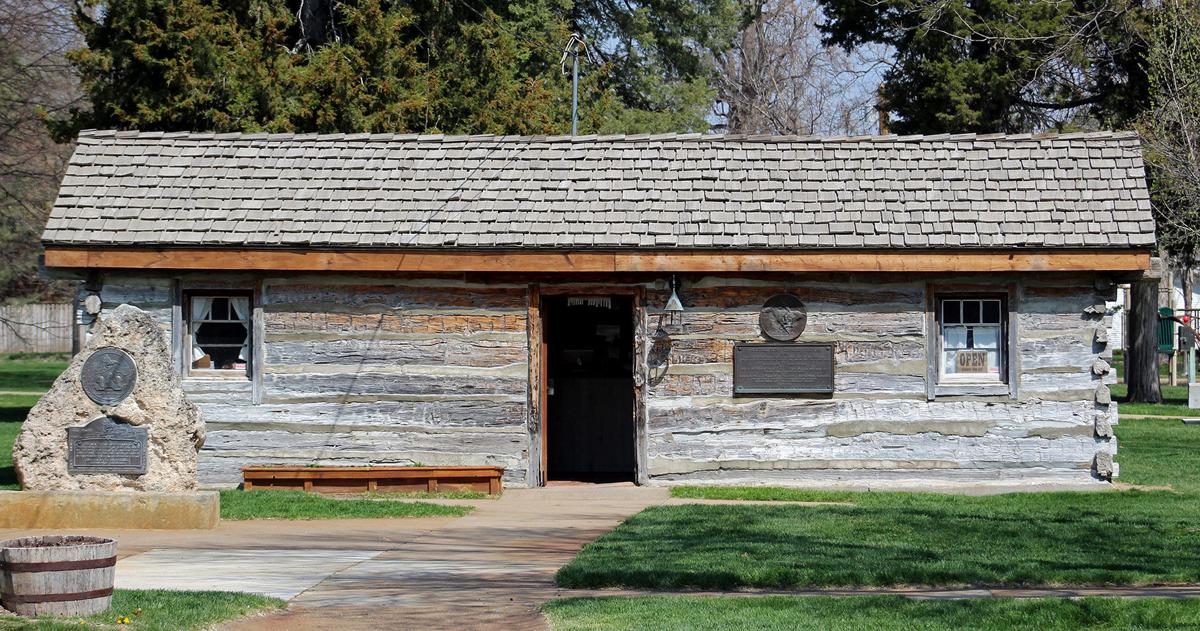 (Editor’s Note: This is the third in a series.

Buffalo Bill Cody, founder of the City of Cody, died 100 years ago and there will be many celebrations of his accomplishments during 2017. The Enterprise will tell the story of his life in a multi-part series throughout the year.)

Mile after mile they flew together, propelled by the motto later adopted as the creed of the postman, delivering the mail in the face of snow, sleet or hail.

Young Will Cody, 14, was a boy bursting into manhood trying to raise money for his family’s needs when he signed on for two-plus months with the Central Overland and California Pikes Peak Express Company.

He was one of the intrepid gang of romantic riders who for 18 months in the Civil War-era 1860s filled a job so dangerous their employers advertised “orphans preferred” as a credential to tote a letter from Missouri to the Pacific Coast.

In one of the service’s most incredible feats, circumstances called for Cody to stitch together several relays, covering well over 300 miles on one ride.

“This round-trip of 384 miles was made without stops except for meals and to change horses and every station on the route was entered on time,” wrote Alexander Majors, a company founder, in his autobiography in 1893.

It was a magical feat of derring-do. Or not.

For all of the legend and lore surrounding Cody’s bold foray into filling this messenger role, others question whether he ever rode at all. Typical for Buffalo Bill.

Simultaneously the best-known American in the world and most photographed person during his lifetime, even backtracking to his youth, William F. Cody has skeptics wondering just what was fact and what was fiction in a wondrous life.

Cody’s youth, it turns out, is even less well-authenticated than the period of his life that went public through dime novels. There is a lack of documentation rather than a surfeit of material.

Did Buffalo Bill ride for the Pony Express?

Majors wrote that he did. So did Cody in his memoirs.

“We rely on his autobiography,” Johnston said, tilting the truth meter towards yes.

“We’re not of the mind to dismiss the autobiography.”

In January, homage was paid to Cody at Lookout Mountain and in Denver.

In February, the Center  celebrated his birthday with more than the usual fanfare. The museum also opened a series of previously placed time capsules.

More events are planned in 2017 celebrating Buffalo Bill’s life, which is sure to be examined from cradle to grave.

Cody lineage in North America is traced to 1698 in Beverly, Mass., and later to Hopkinton, the site of the Boston Marathon start.

In Will’s early years, the immediate family moved from Iowa to Fort Leavenworth, Kan. In his autobiography, Cody speculated the death of his older brother Sam precipitated the move for a change of scenery in 1852.

The yellow house located on the grounds of the Center is the one the family lived in while in Iowa.

Cody was 11 when his father died in 1857, a side effect of long-term poor health after being stabbed following the delivery of an anti-slavery speech.

A story goes that Cody’s mother Mary Ann brought Will to Majors, William Russell and William Waddell, who jointly owned a freight company and he hired on as a messenger for the forerunner of the Pony Express.

One account stated Cody drove an ox team for 50 cents a day and ran messages along a three-mile route in Kansas.

This employment put Cody at hand when the same trio conceived the grand scheme to carry the mail by horseback 1,900 miles between St. Joseph, Mo., and Sacramento, Calif. There were 184 stations where mailbags transferred to fresh horses and riders.

A lightweight, seasoned rider known to the men hiring fit the qualifications, so it made sense Cody could snag such a position despite his youth.

At the time it took weeks to send a letter cross-country. The Pony Express promised 10-day delivery at $5 per half ounce, but then dropped the price to $1.

The service was short-lived because in 1861 the telegraph dis-

placed it in speed and practicality.

Pony Express records are sketchy, with no comprehensive list of riders. Although employed by the firm, James  Butler Hickok did not ride. At 6-feet tall, he was too big and drove freight wagons instead.

Cody called Hickok “a tall, handsome, magnificently built and powerful young fellow, who could out-run, out-jump and out-fight any man in the train. He was generally admitted to be the best man physically in the employ of Russell, Majors & Waddell, and of his bravery there was no doubt.”

The long-haired gambler and gunman was murdered playing cards in Deadwood, S.D., in 1876. Until then he and Cody were close and even briefly acted together, although the stage was not to Hickok’s taste.

The Pony Express life was demanding. Each leg was about 75 miles. Threats, as simple as the harsh elements to human obstacles, were ever present.

Buffalo Bill’s sister, Helen Cody Wetmore, saw his as a life of peril. In her biography of him, “Last of the Great Scouts,” Wetmore wrote, “A wayfarer through that wild land was more likely to run across outlaws and Indians than to pass unmolested.”

She added, “Will had an eye out every trip for a hold-up, but three months went by before he added that novelty to his other experiences.”

Cody’s home station was Three Crossings on the Sweetwater River in Wyoming. But he certainly saw the still-existing Pony Express stations like the one in downtown Gothenburg, Neb.

The one-room, wooden structure’s original roof and walls are faded, but the one-time station has been a tourist attraction since the 1950s.

Inside the building a glass frame on a wall hangs a photo of Cody and other riders, including Broncho Charlie Miller. Miller grabbed the reins for his first ride at 11 and later worked for Buffalo Bill in the Wild West. Also displayed indoors is a cow head piece of art with Cody’s face drawn on it. It was acquired from a bar, a worker on site said.

Buffalo Bill’s autobiography was released in 1879 and no contemporaries protested accounts of his experiences with the Pony Express, Johnston said.

While Johnston is not convinced Cody rode a route for the service, he believes Buffalo Bill was involved in some manner.

The legendary 300-mile Express ride attributed to Cody is explained in his autobiography.

One day Cody arrived at the end of a 75-mile leg for a handoff and discovered his relief rider had been killed in a brawl the night before.

“I did not hesitate for a moment to undertake an extra ride of 85 miles to Rocky Ridge,” Cody wrote. “I then turned back and rode to Red Buttes, my starting place, accomplishing on the round-trip a distance of 322 miles.”

Somehow this ride morphed into the longer one mentioned by Majors, to become a Pony Express record.

If some doubt Cody’s Pony Express cred, it is widely conceded the main reason it retains public fascination today despite its short lifespan is Buffalo Bill’s connection. Most significantly, for the 30 years he toured the world with his Wild West the show featured a segment dramatizing the rides.

Each year the National Pony Express Association stages a re-enactment ride. This year’s ride starts June 2 in St. Joseph and is scheduled to reach Sacramento in 10 days, just like the old days.

The association is a stronghold of Buffalo Bill believers.

In 2015, Larry Carpenter, the group’s corresponding secretary, said, “Most of us believe he was a Pony Express rider.”

Exaggerated or not, flashier than reality or not, the Wild West established in the minds of millions what the Pony Express was “truly” like.

The Wild West defined a romantic endeavor, but as a business venture the real Pony Express shut down because it was losing money.

It is impossible to overstate the importance of Wild West performances on the Pony Express’ enduring stature. Without that constant reminder, “it would be just a footnote” in history, said Bruce Eldredge, the Buffalo Bill Center’s chief executive officer. “He popularized the Pony Express.”

As for William F. Cody, it was hardly as if his life peaked at 14 as a skinny lad with the Pony Express.

Before long he left home to fight in the Civil War, become such a proficient buffalo hunter he gained the nickname Buffalo Bill and was such a valuable scout in the Native American skirmishes on the frontier that he earned the Congressional Medal of Honor.

And then he became famous.

Somewhere along the way Buffalo Bill Cody transformed from man to myth, from flesh and blood to legend.