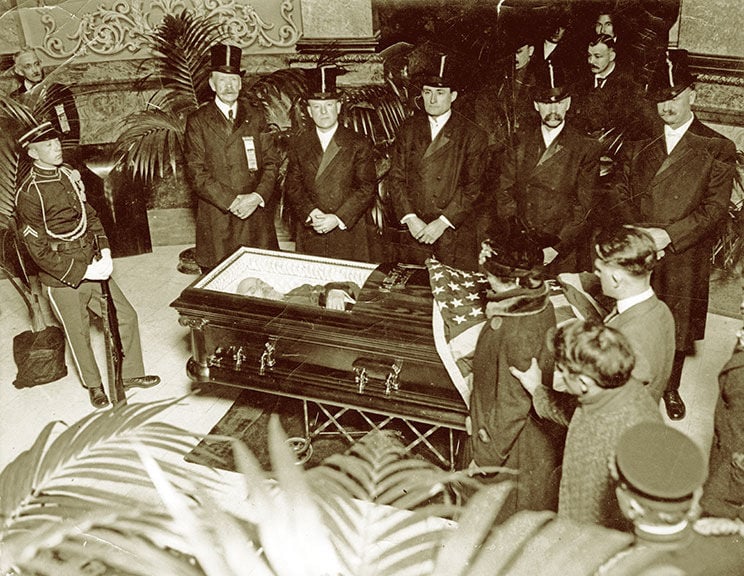 Mourners file past the open coffin of William F. “Buffalo Bill” Cody for one last look at the famous American as he lies in state at the Colorado State Capitol building in Denver. (Buffalo Bill Center of the West, Cody, Wyoming, USA. MS 006 William F. Cody Collection. P.6.1559) 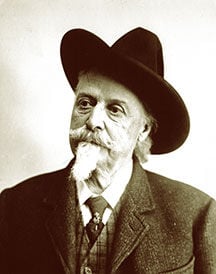 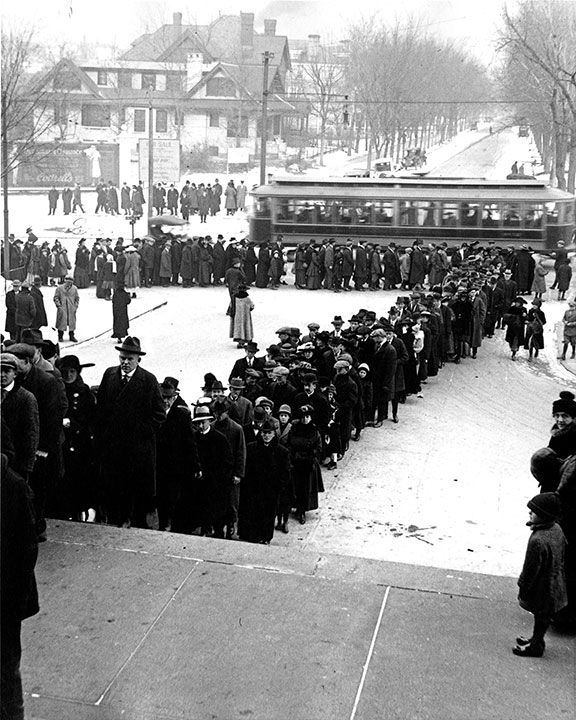 A crowd waits outside the Colorado State Capitol building in Denver to view the body of William F. “Buffalo Bill” Cody after his death in 1917. Buffalo Bill Center of the West, Cody, Wyoming, USA. MS 006 William F. Cody Collection. P.6.0493)

Mourners file past the open coffin of William F. “Buffalo Bill” Cody for one last look at the famous American as he lies in state at the Colorado State Capitol building in Denver. (Buffalo Bill Center of the West, Cody, Wyoming, USA. MS 006 William F. Cody Collection. P.6.1559)

A crowd waits outside the Colorado State Capitol building in Denver to view the body of William F. “Buffalo Bill” Cody after his death in 1917. Buffalo Bill Center of the West, Cody, Wyoming, USA. MS 006 William F. Cody Collection. P.6.0493)

“The last of the picturesque western characters,” read the Hot Springs Era in Arkansas.

The Denver Times claimed to publish the last picture taken of this so frequently photographed man.

“Buffalo Bill Is No More,” read the Wichita Eagle in Kansas.

Many papers referred to Cody as “the idol” of America’s youth.

A grinning, horseback riding Buffalo Bill once regularly led Wild West parades through the streets of cities as an advertising gimmick.

On Jan. 14, 1917, his flag-draped casket was hauled by wagon through Denver as mourners lined the streets.

It was announced the single white horse with no rider in the procession was Buffalo Bill’s “McKinley,” the last in a long line of white horses he favored.

It was later learned this was only a similar white horse borrowed for the occasion from a nearby stable, a so-called white lie foisted on the public.

Cody’s body lay in state in the Colorado capital building for three hours as 25,000 people shuffled past paying respects.

Elks Lodge 17 took charge of the funeral and a eulogy was delivered by Col. John W. Springer of Denver.

As part of that farewell speech, Springer said, “With his upturned face to the noonday sun, William Frederick Cody, on Jan. 10, 1917, met the death angel face to face, and drifted into a

dreamless sleep that knows no waking.”

After the fanfare, as arrangements to construct a monument-gravesite atop Lookout Mountain began in nearby Golden, Denver took possession of Cody’s body and parked it at Olinger’s Mortuary at the corner of 16th and Boulder Streets.

Buffalo Bill Cody had been a tourist attraction in life and Denver was determined to ensure he remained one in death.

Viewing William F. Cody as more man than legend, old friends in Cody took exception to these doings, said a descendant of those men.

Bob Richard, 79, grandson of one of a trio of alleged plotters, said they believed Cody was wronged, and really wanted to be buried atop of Cedar Mountain overlooking the community he helped found.

When he was 14, Richard said his grandfather Fred told him the story of how he, Ned Frost and John Vogel, came to swipe Cody’s body from Olinger’s supervision and bury it on Cedar Mountain.

The tale Fred Richard told Bob Richard has morphed into local legend and taken on the overtones of Cody’s greatest mystery.

A short while after Buffalo Bill’s death, it goes, an older cow hand working a ranch on the outskirts of town died without any known kin. He was brought to Vogel’s funeral home.

When Vogel cut his hair and fixed him up for burial, he said, “He looks just like Bill.”

Frost and Fred Richard agreed and a scheme was hatched. They transferred this old-timer to a rubber body bag, loaded him into a car and the four of them drove hundreds of miles to Denver, directly to Olinger’s, an imposing, two-story brick structure.

Vogel approached George Washington Olinger, then operating the family business, and asked, as one professional to another, if he and his friends could see Buffalo Bill.

They were led to the room where he lay and they supposedly said, “Yep, that’s old Bill.”

The Cody men departed, but later, waiting for an hour after the lights went out in the mortuary, they sneaked in and swapped the body of the ranch hand for Cody’s. The way Bob Richard tells it, the door wasn’t even locked.

They hustled the body back to Cody, hauled it up to Cedar Mountain’s 7,890-foot summit, and hastily buried it in an unmarked grave.

Supposedly, the trio’s next move was to stir up the natives as a smokescreen. Bob Richard said there were 13 saloons and two sporting houses in Cody at the time and Fred Richard and partners went door-to-door riling up drunks sufficiently so they would go retrieve Cody’s body in Colorado.

Lore says hundreds piled into cars and sped for the Colorado border, only to be rebuffed by a regiment of the Colorado National Guard.

Confusion and hostility flared and a grudge formed.

Many in Cody to this day believe a yarn that a World War I tank hovering at the gravesite represented the extremes Colorado officials were willing to go to, just to ensure Cody’s body remained in that state.

The tank was actually on the premises to publicize war bond sales.

There is at least one glaring flaw in Richard’s tale. On June 3, 1917, when the burial event was conducted on Lookout Mountain, there was an open casket and some 3,000 people filed past. No one there suggested it might not be Buffalo Bill himself in the coffin.

Still, others do not believe that is definitive and wonder if Bill was body-guarded 24-7, January to June.

“There is a lot you can do with makeup,” said Bruce Eldredge, CEO of the Buffalo Bill Center of the West in Cody. “Was there someone with him every minute?”

In 1921, Louisa Cody, Buffalo Bill’s wife, died and was buried on Lookout Mountain. After that, Johnny Baker, Cody’s foster son and long-time Wild West participant, oversaw what he felt was the ultimate grave protection – pouring 20 tons of concrete at the site. It would take more bomb than shovel to get at the bodies after that.

Although the dispute pitted Denver body possession against Cody body claim, overshadowed was the desire of North Platte, Neb., where Buffalo Bill maintained his Scout’s Rest Ranch for decades, to bury the body there.

The Nebraskans were also-rans from the start.

In 1927, 10 years after Cody’s death, family members, including Josephine Cody Bentley (Cody’s uncle’s daughter) lobbied for his remains to be interred in Arlington National Cemetery on the basis of his Civil War service.

The backing of World War I hero Gen. John “Blackjack” Pershing was enlisted in the cause. One legal provision scuttled the operation, however. There was a requirement custodians of the remains had to agree. Golden officials refused.

There is a plaque in the stone at the Buffalo Bill Golden site reading, “By His Own Request.” That is one phrase the city of Cody definitely disputed.

Michael Johnson, former operator of Cody Trolley Tours, wrote the material questioning the body’s location that is read to tourists on the history ride.

“The rational brain says the body is in Denver,” Johnson said. “But the conspiracy theorist in me thinks he is on Cedar Mountain.”

It is not difficult to find Cody residents who say they have visited the grave atop Cedar Mountain, but it is more difficult to find present-day Cody heavyweights who state unequivocally Cody’s body is really there.

“There is a 1 percent chance he is not in Denver,” Eldredge said.

Jeremy Johnston, curator of the Center’s Buffalo Bill Museum and chair and curator of Western American History, said he grew up believing tales about the body stealing – but changed his mind after doing some research.

“I wanted to believe it,” Johnston said. “I was surprised to find nothing (in archives). I would love this story to be true.”

As for the Wyoming mob “fooled” into heading for Denver, the evidence is slim as well.

“There is enough oral history to suggest some guys headed down to Denver from Cody,” Fees said. “There’s no evidence they got to Denver.”

Johnston knows Bob Richard’s story, but said, “I think there are a number of holes in that.”

He also wondered why no one blew the whistle at the June 1917 burial.

“Depending on how the body was embalmed, it would have to be a perfect match,” he said. “This is one of the most photographed men in the world.”

An open casket with a Buffalo Bill look-alike mannequin was to be part of those proceedings. Steve Friesen, director of the Golden museum, invited Cody residents to come by the busload.

“We could kidnap the mannequin,” she said.

When Buffalo Bill died, grand plans were revealed for a gigantic, $500,000 monument to be placed on Lookout Mountain.

Famed sculptor Alexander Phimster Proctor was engaged and sketches and a model followed.

The intention was for the piece to be financed by pennies and nickels donated by children across the land. Off to a swift start, some $6,900 was soon raised, but the effort petered out when the United States entered World War I later that year.

Those most closely involved seem to prefer a continuing mystery about Buffalo Bill’s whereabouts, rather than a resolution.

A way to determine at last if there is even a body at the Cedar Mountain site would be to run up-to-date technology, radar or electronic imaging, over the ground, Johnston said.

If that showed a body was present, a next step would be an exhumation and application of DNA testing, though nobody is pushing for such a Forensic Files-type event.

“Beyond a shadow of a doubt his spirit is up there on Cedar Mountain,” said the main promoter of the kidnapping tale.

And maybe elsewhere in town, too. Buffalo Bill built the Irma Hotel on Sheridan Avenue in 1902, naming it after one of his daughters. Mike Darby, whose family now runs it, said guests and workers see the Old Scout’s ghost there all of the time.