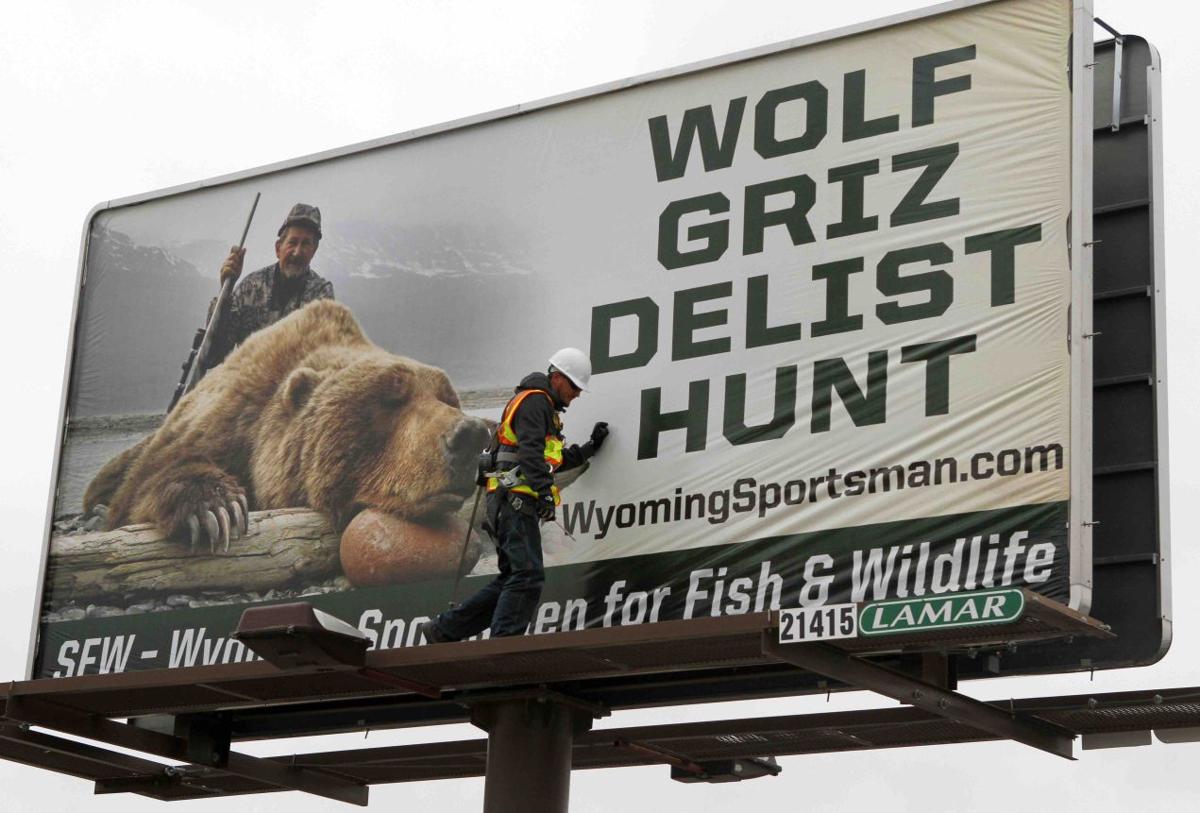 Daniel Stewart of Lamar Advertising out of Rock Springs installs a new billboard meant to garner support for the delisting of the gray wolf and Yellowstone grizzly bear on Tuesday outside Wyoming Home and Ranch along Big Horn Avenue. 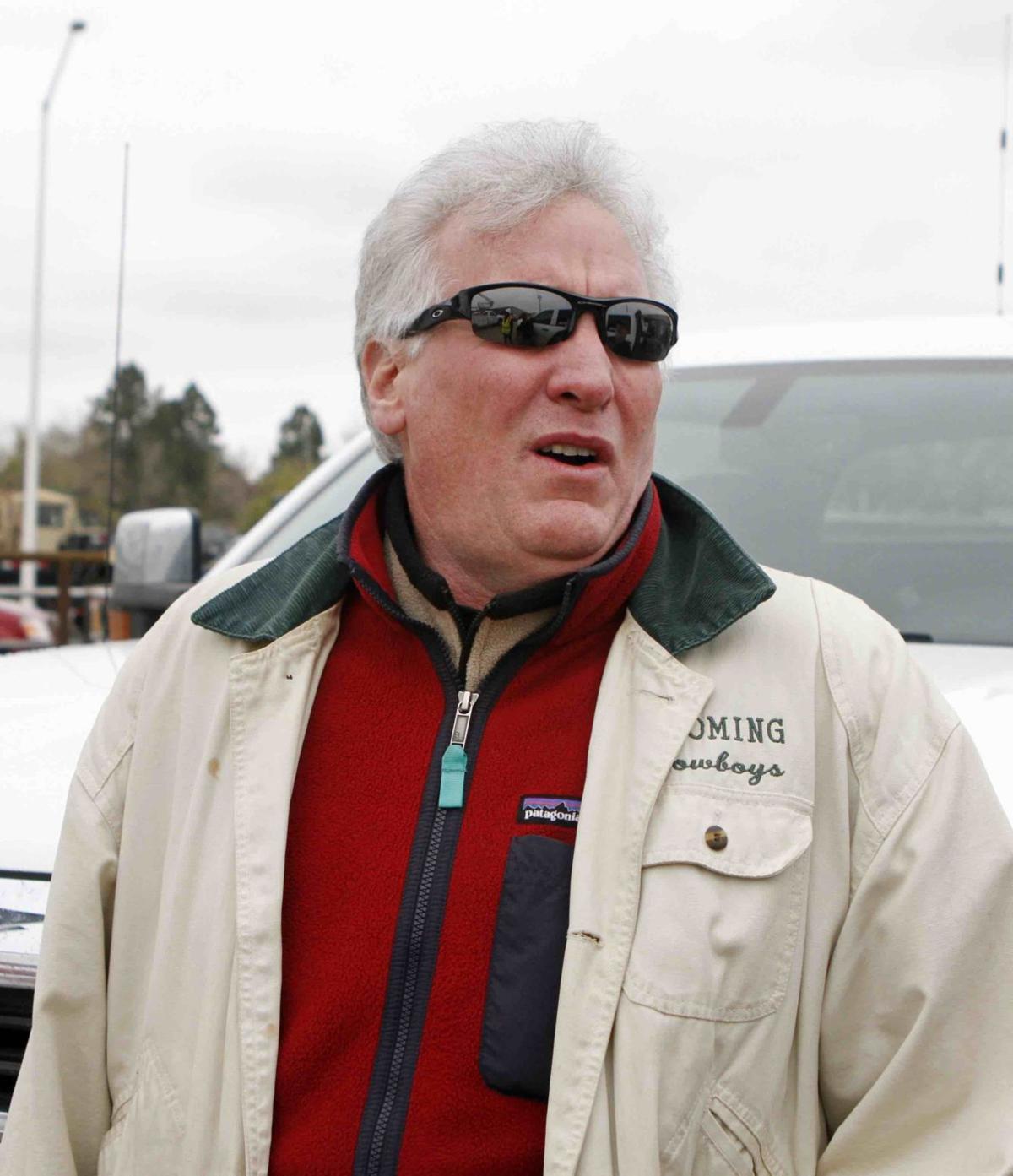 Scott Weber takes a moment to discuss the new billboard he paid for as it was installed on Tuesday.

Daniel Stewart of Lamar Advertising out of Rock Springs installs a new billboard meant to garner support for the delisting of the gray wolf and Yellowstone grizzly bear on Tuesday outside Wyoming Home and Ranch along Big Horn Avenue.

Scott Weber takes a moment to discuss the new billboard he paid for as it was installed on Tuesday.

As the billboard workers rolled down the old message about Wounded Warriors and his $10,000 worth of words took their place overlooking Big Horn Avenue, Scott Weber was gleeful.

Weber was purposely inflaming the controversial debate over the issue of Yellowstone grizzly bear delisting as surely as if he threw a lighted match on a pile of dry leaves.

Forget any carefully crafted language in proposals by the U.S. Fish and Wildlife Service or Wyoming Game and Fish about how one day if the recovered bear population is delisted from the Endangered Species Act there might be a trophy hunt.

In letters about two feet tall, the right side of the billboard reads “Wolf. Griz. Delist. Hunt.”

“I hope they spelled everything right,” Weber said.

On the left side is a hunter resting on the body of a gigantic grizzly.

Credit for the message goes to “SFW-Wyoming Sportsmen For Fish And Wildlife.” Weber is a member of the group.

“The timing is perfect here,” Weber said as he snapped photographs of his billboard being installed. “It’ll really stir up anti-hunters. We’re selling a call to action. Let’s delist.”

The new billboard will rotate around Cody for a year, three months in each of four spots, for the cash investment out of the pocket of the operator of Gunrunner Firearms & Pawn downtown.

Weber lives on the North Fork and said it is so often over-run with grizzlies, “I can’t even go out of my house without a high-caliber handgun. It’s dangerous.”

This is a sensitive discussion period on the future of the grizzly in this area. At issue is whether or not the federal government will continue to manage the species or the bear will be removed from Endangered Species Act protection and management is turned over to the states of Wyoming, Montana and Idaho.

A decision on that matter looms within months. The sentiment in the Cody region has mostly tilted in favor of delisting because of the high density of the bears and studies showing they have recovered as a population.

Those against delisting have decried the suggestion that in the future the bears will be hunted. Both state and federal plans have provisions for hunting within the framework of population management.

There is a comment period for members of the public to  make feelings known in letters, online, or in public testimony. Weber act is speaking at a higher volume.

The billboard measures 10 feet by 22 feet. After three months inhabiting Big Horn Avenue the sign will move to the West Strip, the Belfry Highway and near Yellowstone Regional Airport.

If the grizzly is delisted before the year is up Weber will alter his message slightly.

“I’ve been wanting to do this for a long time,” he said. “I never got it done for the wolves.”

As the workmen swiftly replaced one sign with another, an onlooker who works nearby stepped up to take a picture of Weber’s message.

Brad Thompson, a hunter, said, “I love it.” He planned to show the photo to friends.

Weber said he hopes the outcome of delisting is a grizzly hunting season.

“The greatest trophy in the Lower 48 is a male grizzly,” Weber said. “Now you won’t have to go to Alaska to get a grizzly.”