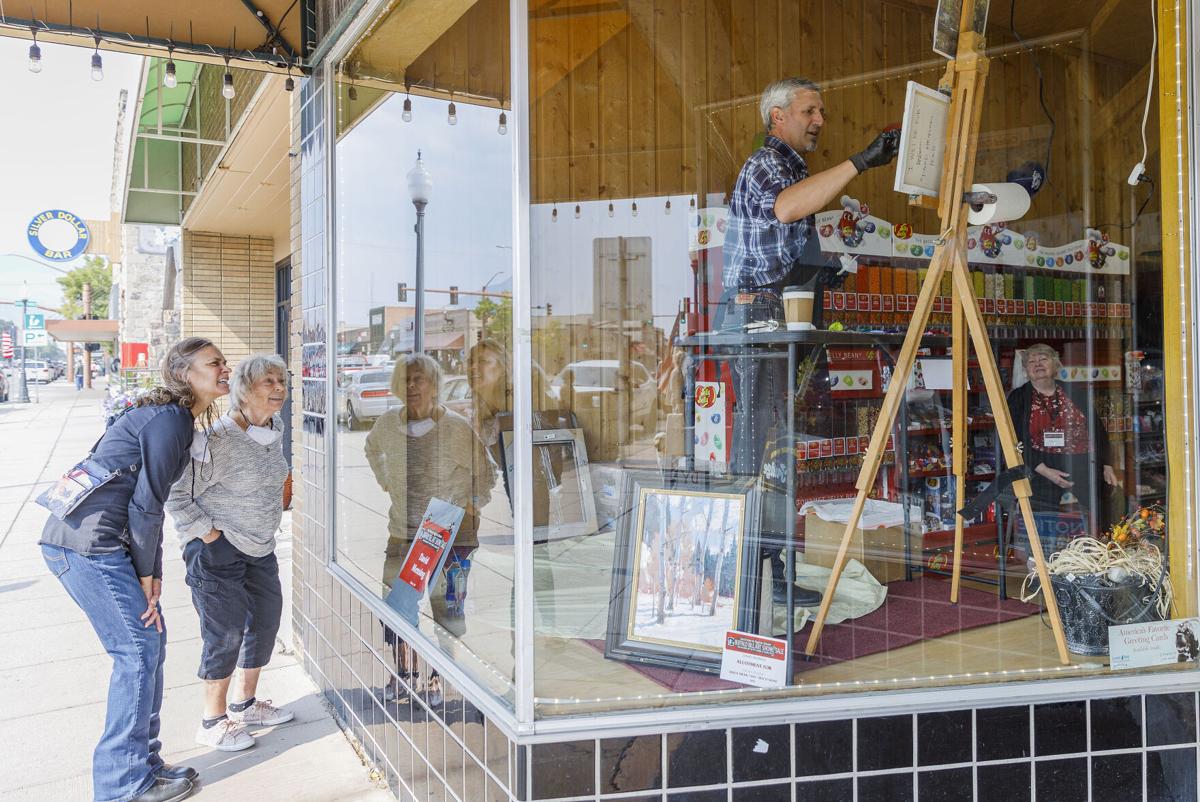 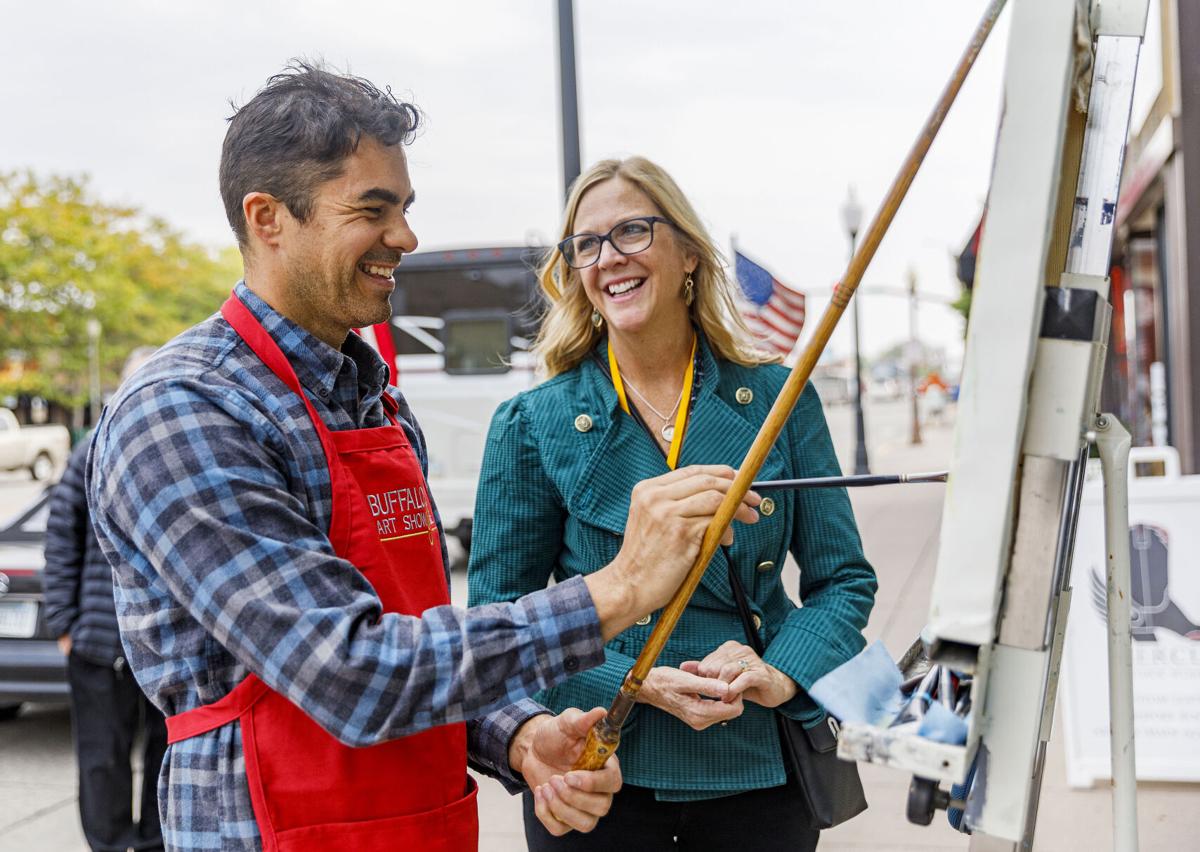 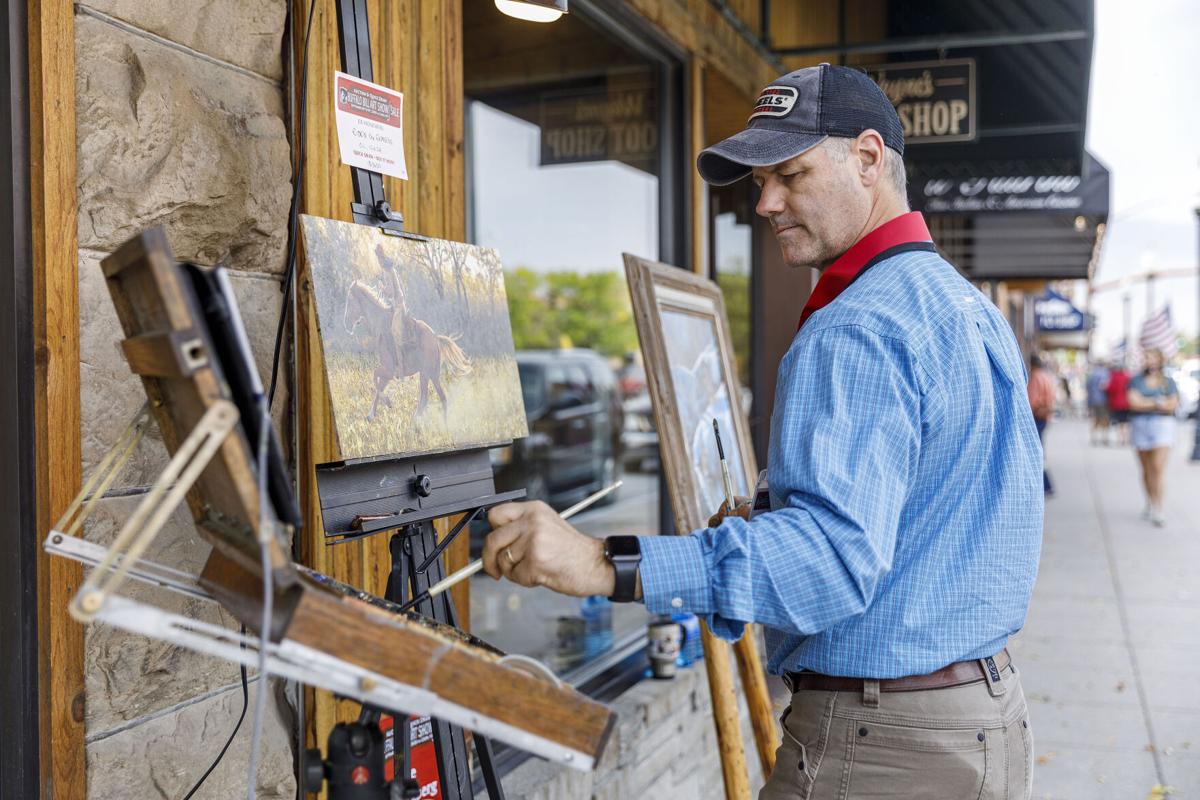 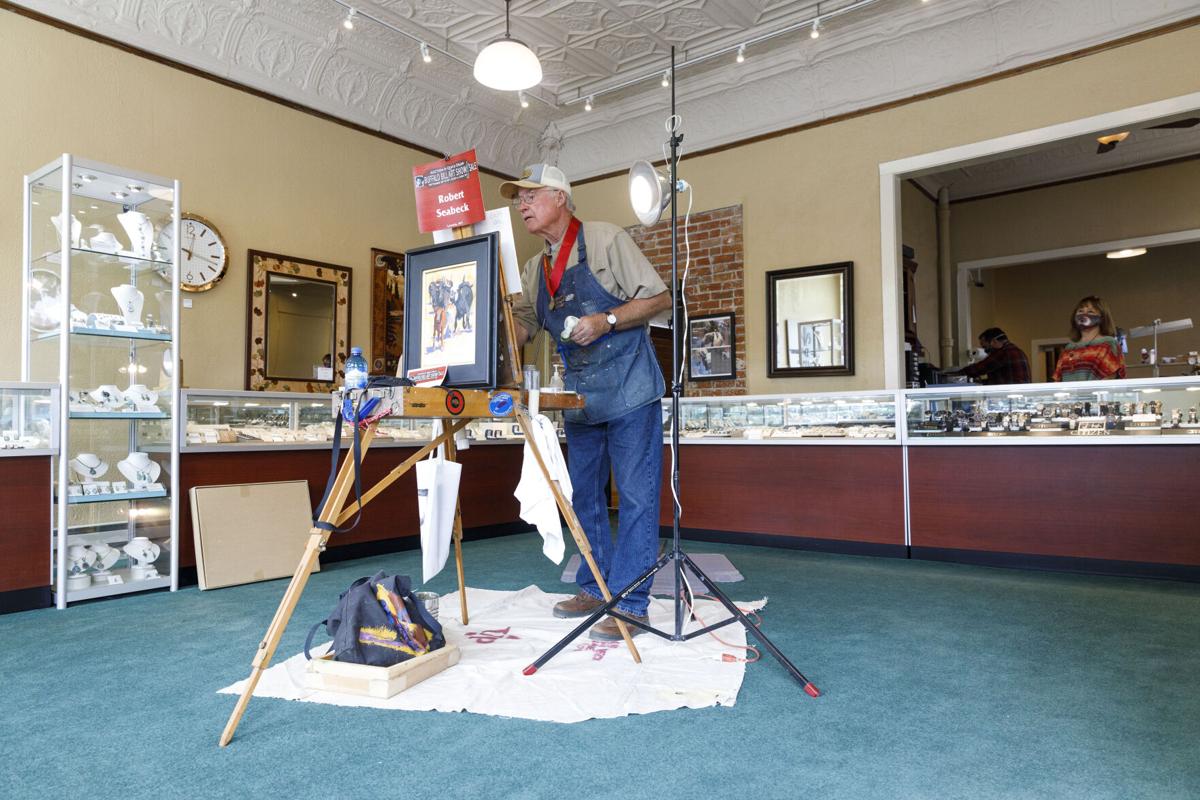 Robert Seabeck paints Running them Down the Shoot at Sean DeNamur Designs during the Quick Draw on Saturday, September 19th. 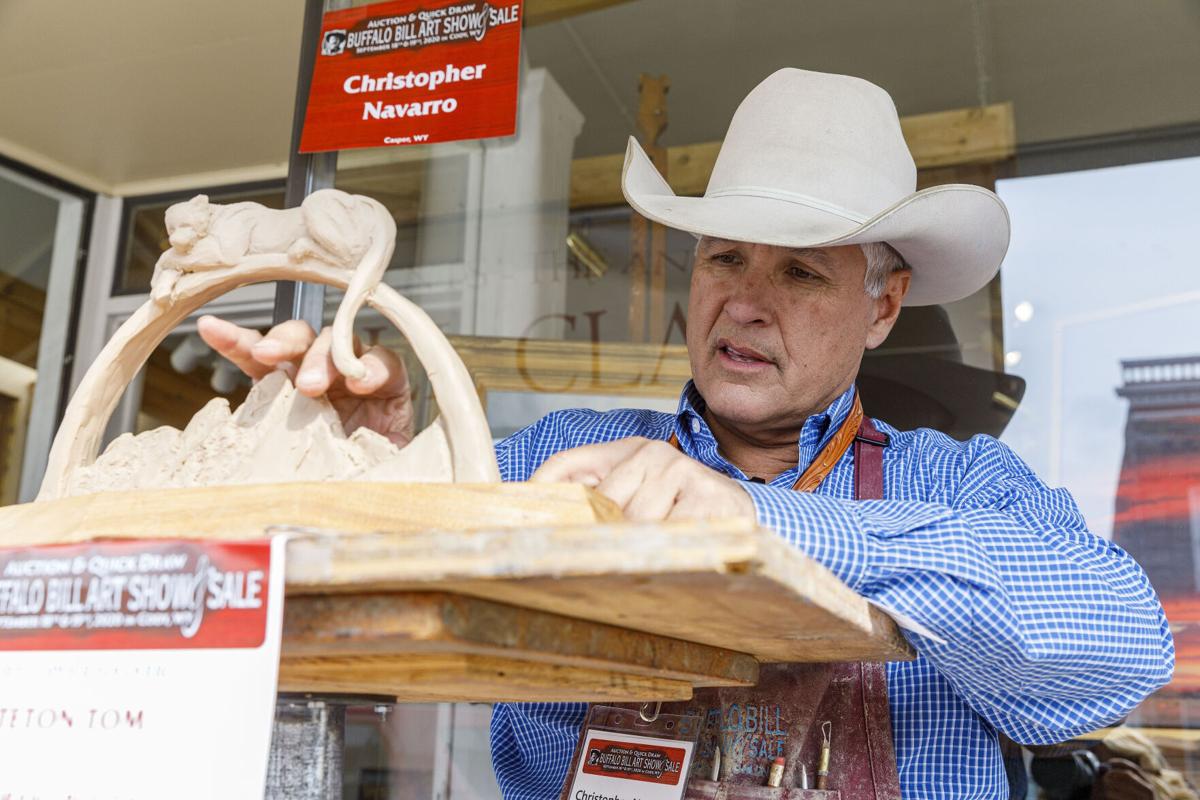 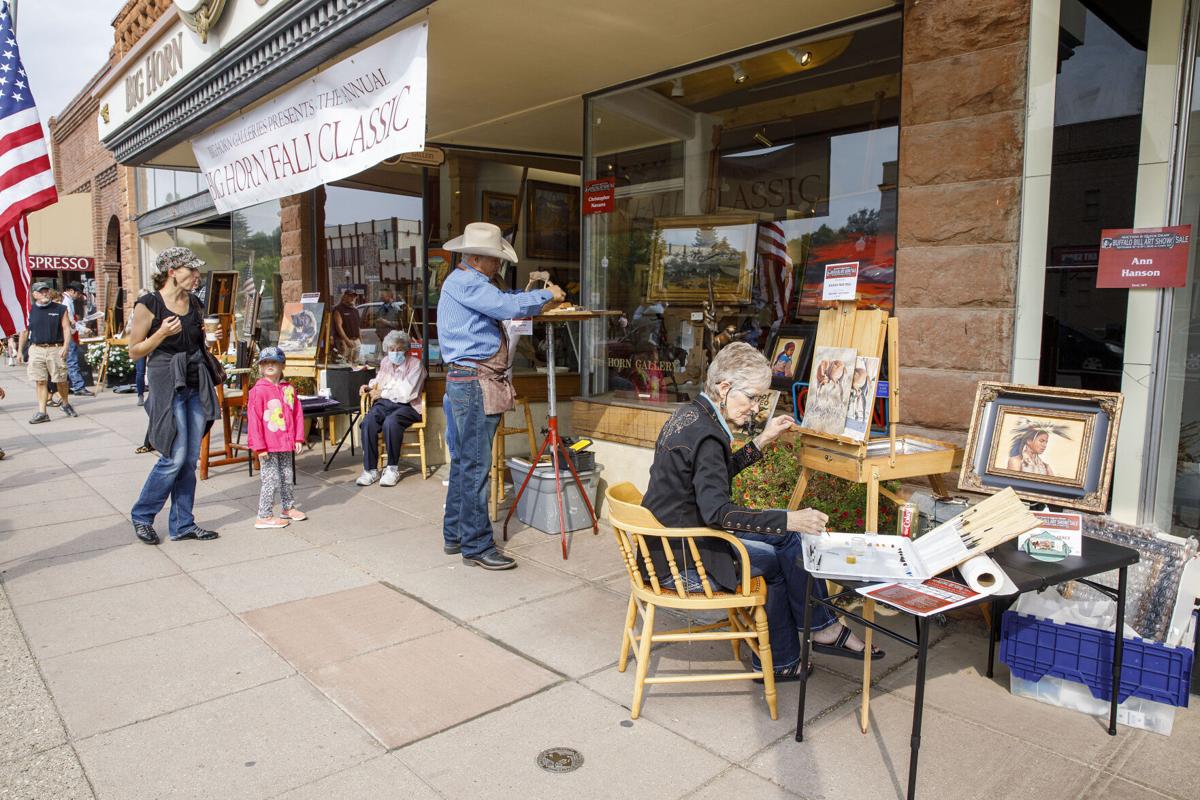 Artists work in front of Big Horn Galleries during the Quick Draw on Saturday, September 19th. 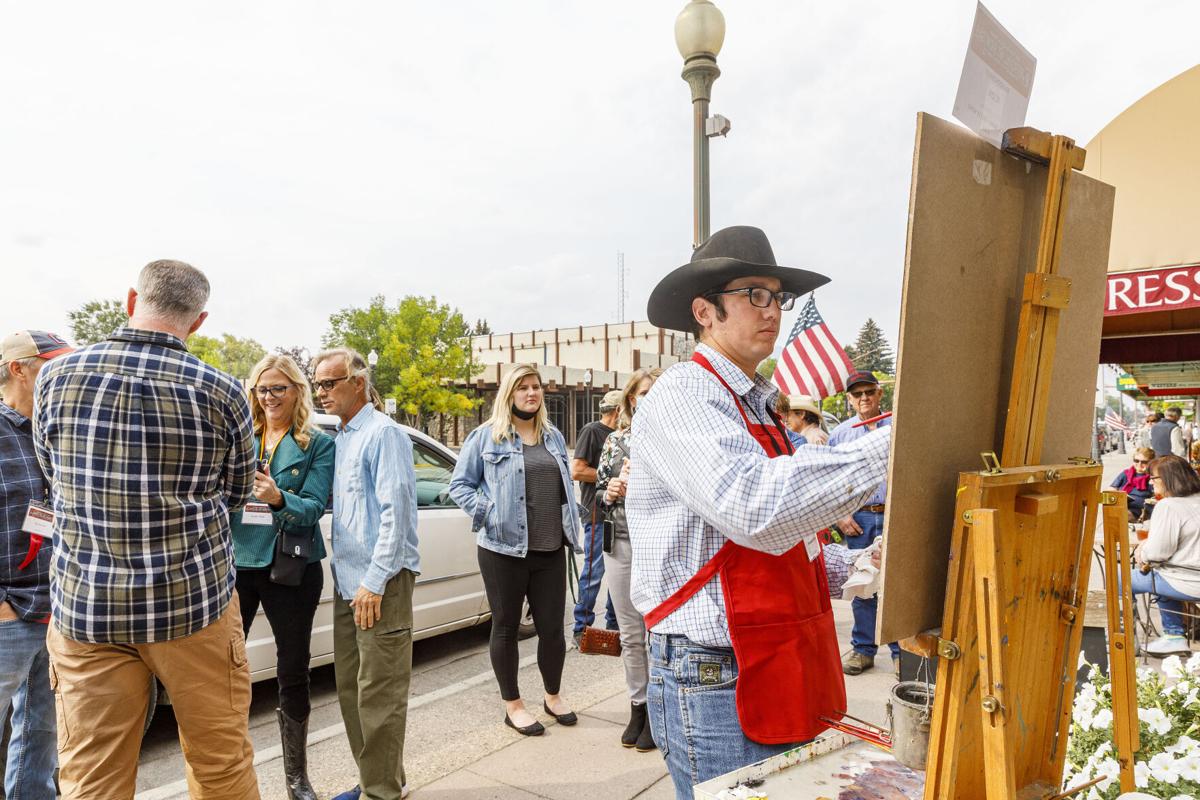 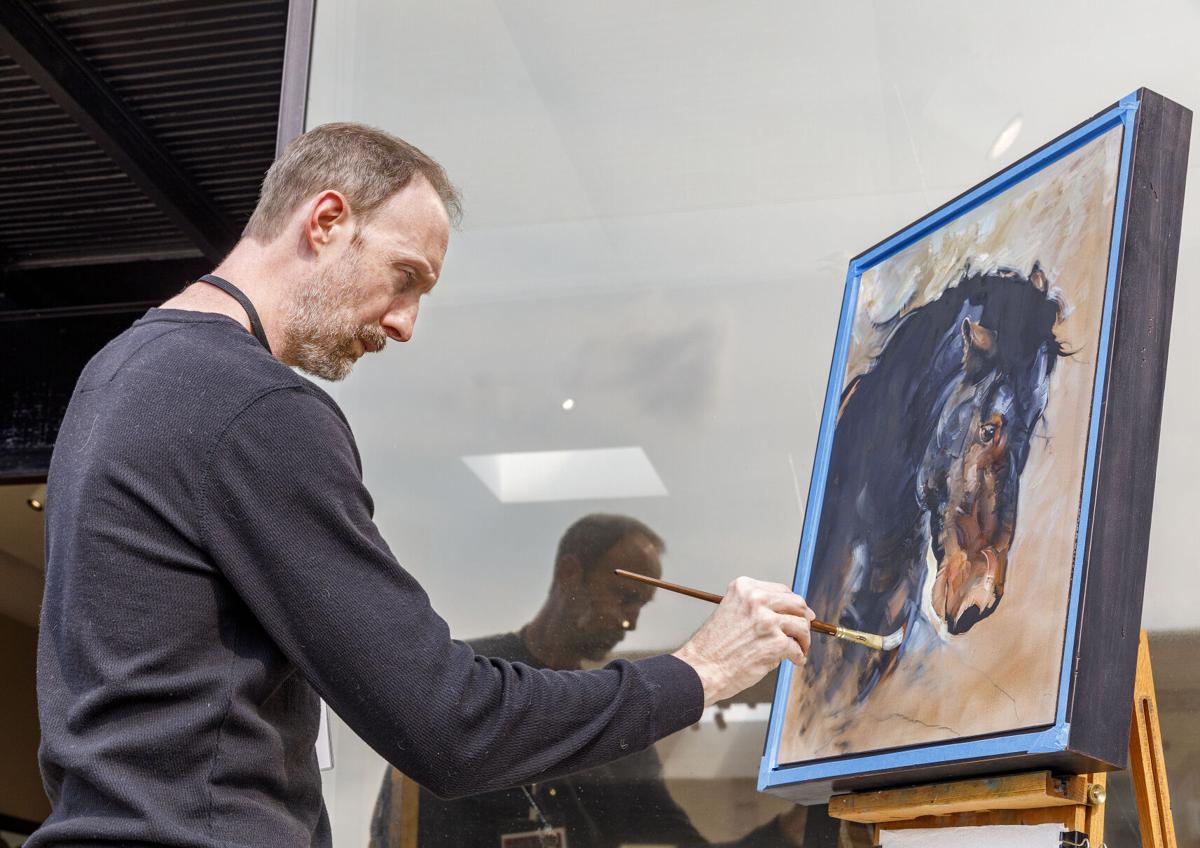 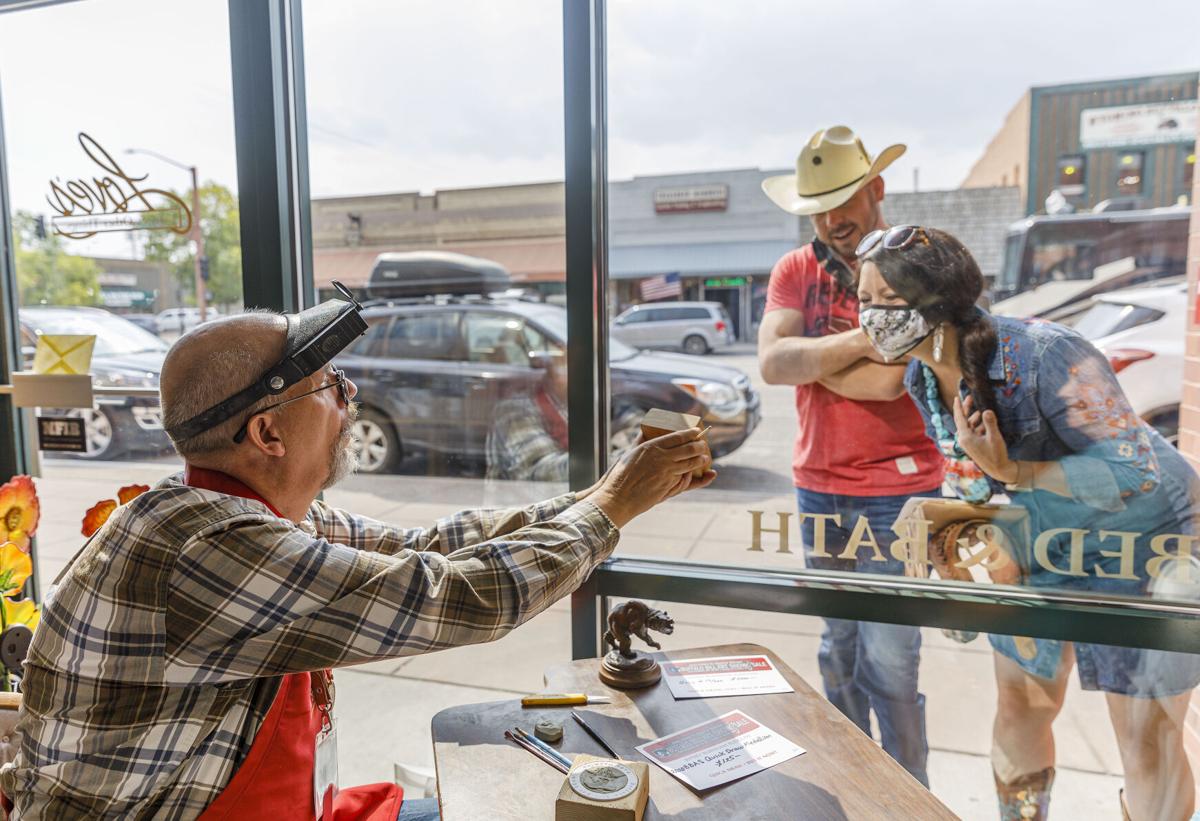 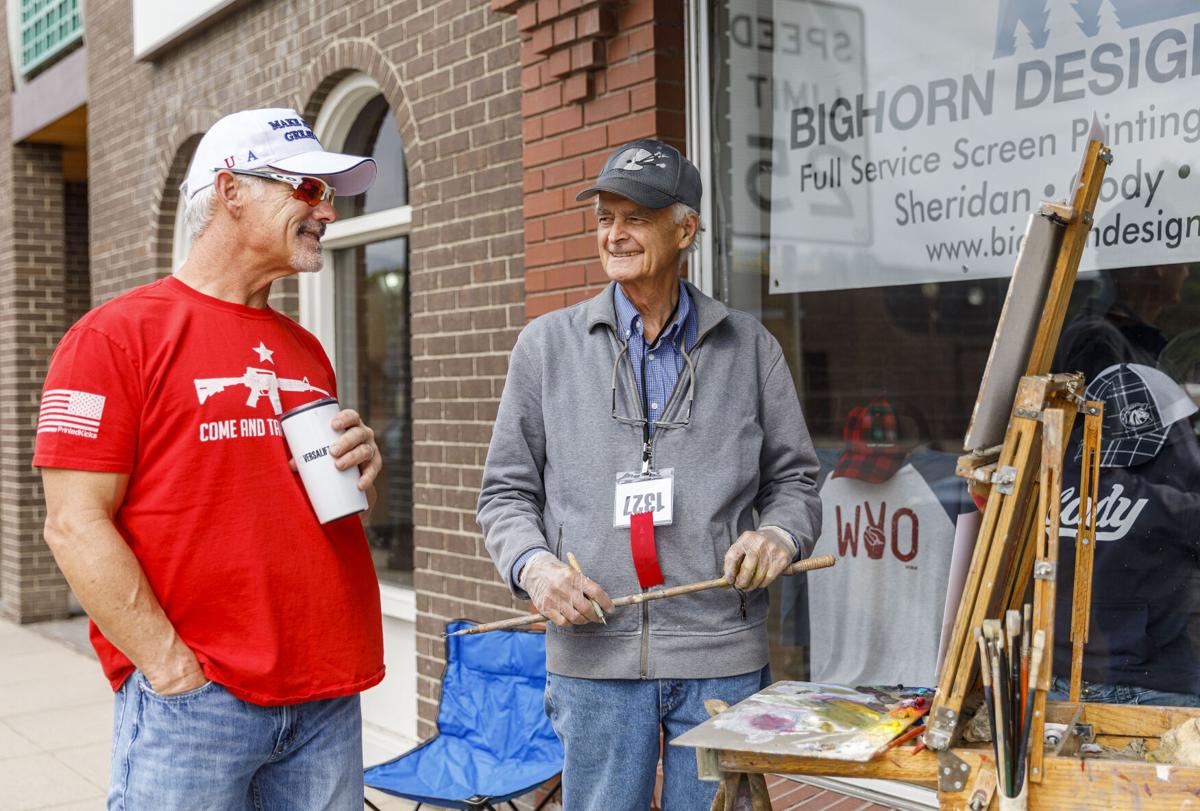 Kurt Acton talks to Denny Neville while he paints Early Morning during the Quick Draw downtown on Saturday, September 19th.

Robert Seabeck paints Running them Down the Shoot at Sean DeNamur Designs during the Quick Draw on Saturday, September 19th.

Artists work in front of Big Horn Galleries during the Quick Draw on Saturday, September 19th.

Kurt Acton talks to Denny Neville while he paints Early Morning during the Quick Draw downtown on Saturday, September 19th.

Jax Finley, 7, wandered down Sheridan Avenue, observing artists along the sidewalk paint in front of businesses.

For the first time, he and his mother Kari Finley had the chance to watch some of the West’s premier artists create works right in front of them.

Usually Saturday’s Quick Draw at the Buffalo Bill Art Show & Sale, a cornerstone of Rendezvous Royale, takes place in a large tent outside the Buffalo Bill Center of the West, with admission required to enter.

Not this year. Instead of canceling the event due to COVID-19 restrictions, organizers moved it downtown.

“We knew it was going to go on and we were super excited to check it out,” Kari said.

Sculptor Dustin Payne set up outside The Irma, Michelle Usibelli touched up a painting outside North Fork Anglers, and Joe Kronenberg took questions from passersby outside of Wayne’s Boots.

A group of painters spread out along one block caused a pedestrian jam near Rawhide Coffee, with people exiting with steaming cups and stopping to watch.

“I like the format that it involves the merchants,” Usibelli said. “Hopefully this will result in some more business for the merchants. It’s a nice day and anybody can come along the street.”

The weather did indeed help, with the wind blowing out some of the smoky haze and allowing many of the artists to set up outside. At the 12th Street auction tent outside By Western Hands, musicians played live and tables were set up under six large tents, complete with TVs to broadcast the afternoon auction.

For many, the fact the event was happening at all made it a victory.

“Getting anything accomplished with Covid is great,” said sculpture LaQuincey Reed.

There were a lot of tweaks to the usual quick draw structure. Artists had two hours instead of 1 1/2 and could actually get quite the head start on their paintings, which were sold not in auction but online for a fixed price.

Kronenberg, making his Cody quick draw debut, missed the pressure of the traditional quick draw but appreciated what it allowed.

“It’s a lot more complex painting,” he said. “And I get to talk to people while painting.”

Longtime quick draw artist Laurie Lee even had time to give her granddaughter a hug. Lee’s daughter Austin Frescoln, who comes every year to see her mom, said it was the first time Madison, 6, was able to walk around and check out the event.

“It is kind of interesting,” Frescoln said. “One thing I like is that it’s free.”

She wasn’t the only one who enjoyed that part. Locals John and Tammy Cogan heard about it and came down to check out the event, not knowing at first they had lucked into a free version of what was usually a ticketed event.

John enjoyed the sidewalk atmosphere and the chance to stroll down the street and check out various artists.

Not all artists were on the sidewalk. When David Mensing first heard from the organizers that he’d be at Cowtown Candy, he wasn’t too sure about his set up.

“They said, ‘You’re in the candy shop in the window, sort of like in Amsterdam,’” he said. “Actually it’s a great spot – great light, great exposure. I was joking with the owner about offering to sign a lease with him and paint here all the time.”

He too enjoyed having more of the community involved.

“It’s nice to be able to do what I love and interact with people at the same time.”

Kelly Hunt and Caryl Cline love attending each year and while they were saddened with the loss of the Patron’s Ball, were pleased to have others return.

“I’m surprised they were able to do this much,” Cline said.

Hunt, who’s building an RV park with her husband on the edge of town, had also been at the art walk the night before and had already nabbed some buffalo artwork to adorn the new business. As the pair left The Irma porch and Payne’s sculpting, Hunt was back on the hunt for buffalo, and more ways to support downtown businesses.

Meanwhile, across the street, Jax was brimming with inspiration to do some drawing.