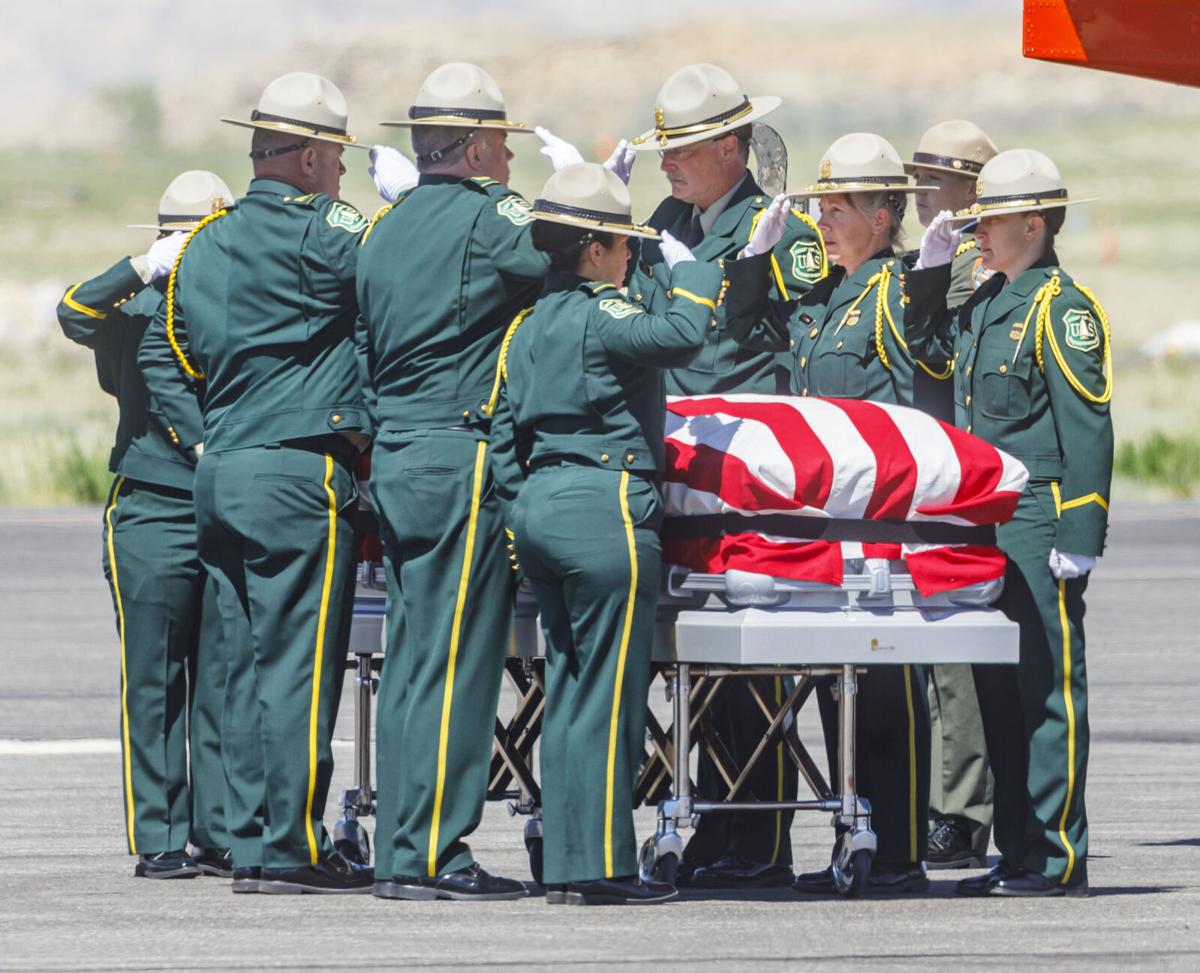 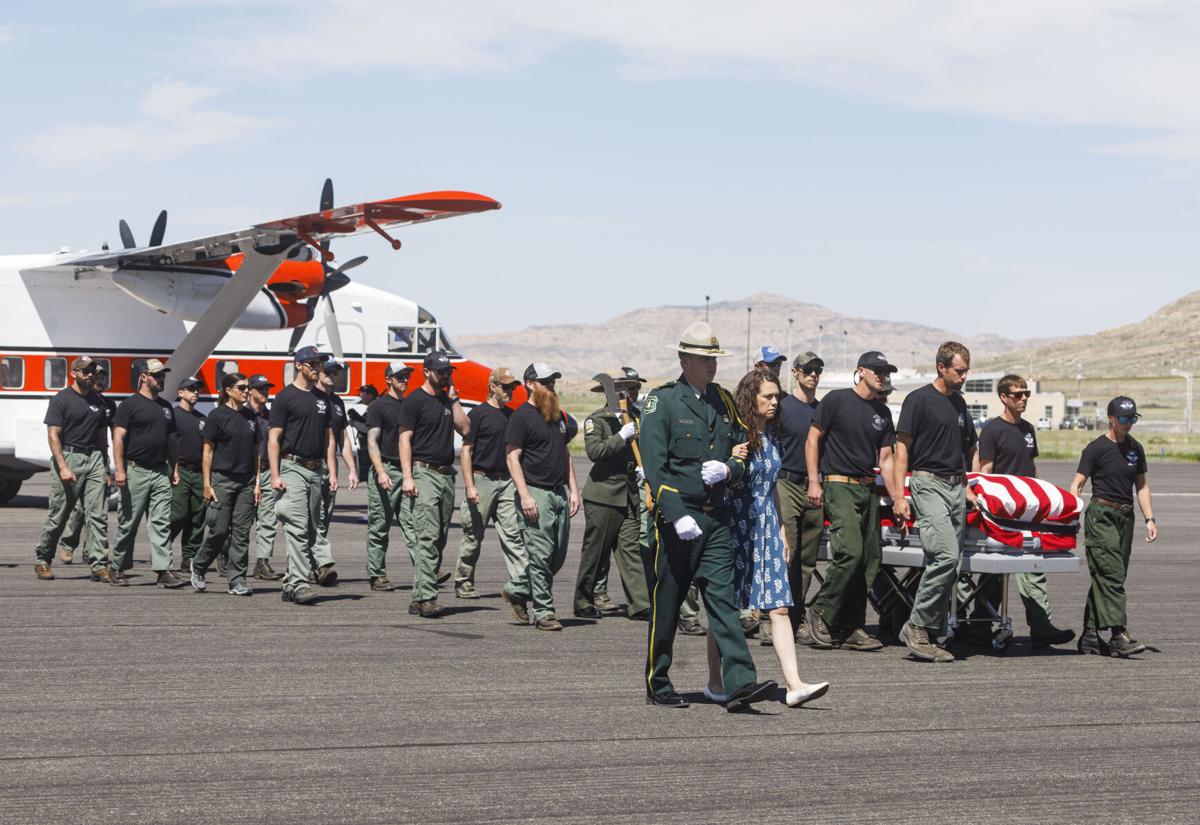 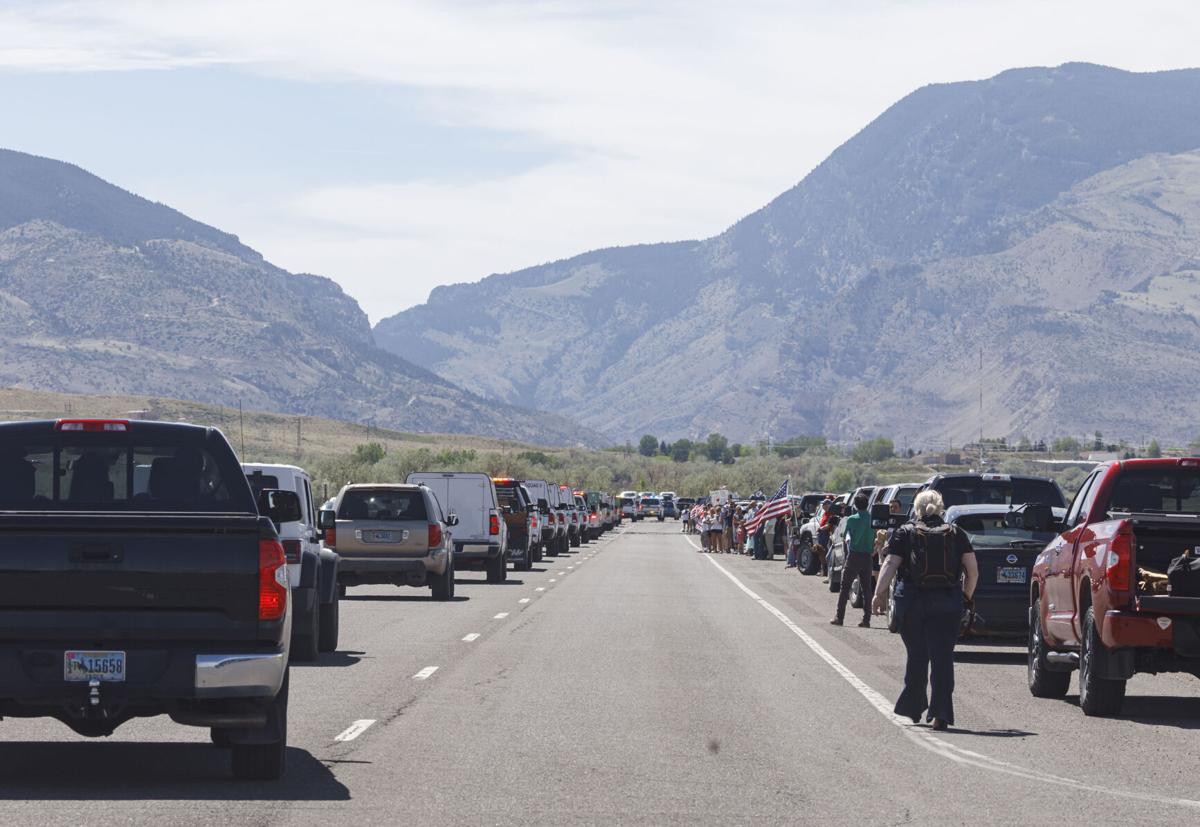 Hundreds of emergency responders and members of the community came out to honor fallen smokejumper Tim Hart in a funeral procession starting from Choice Aviation on Sunday, June 6th. 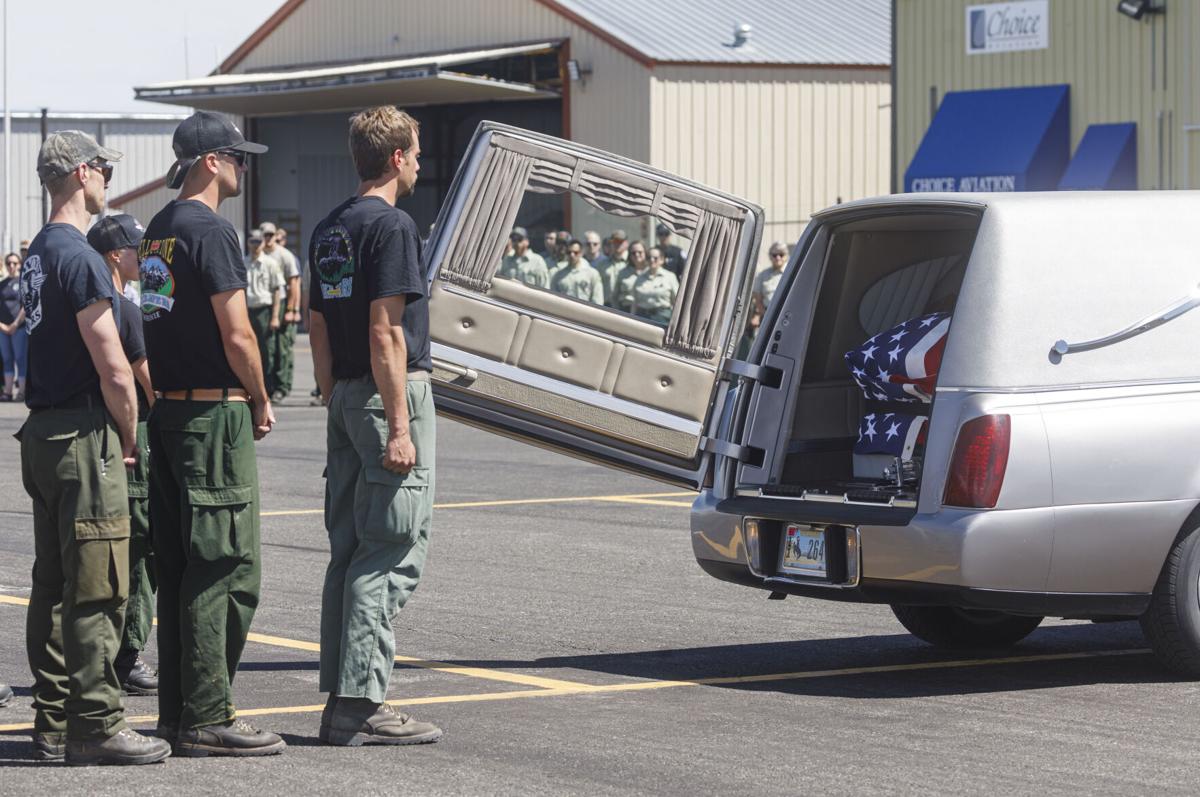 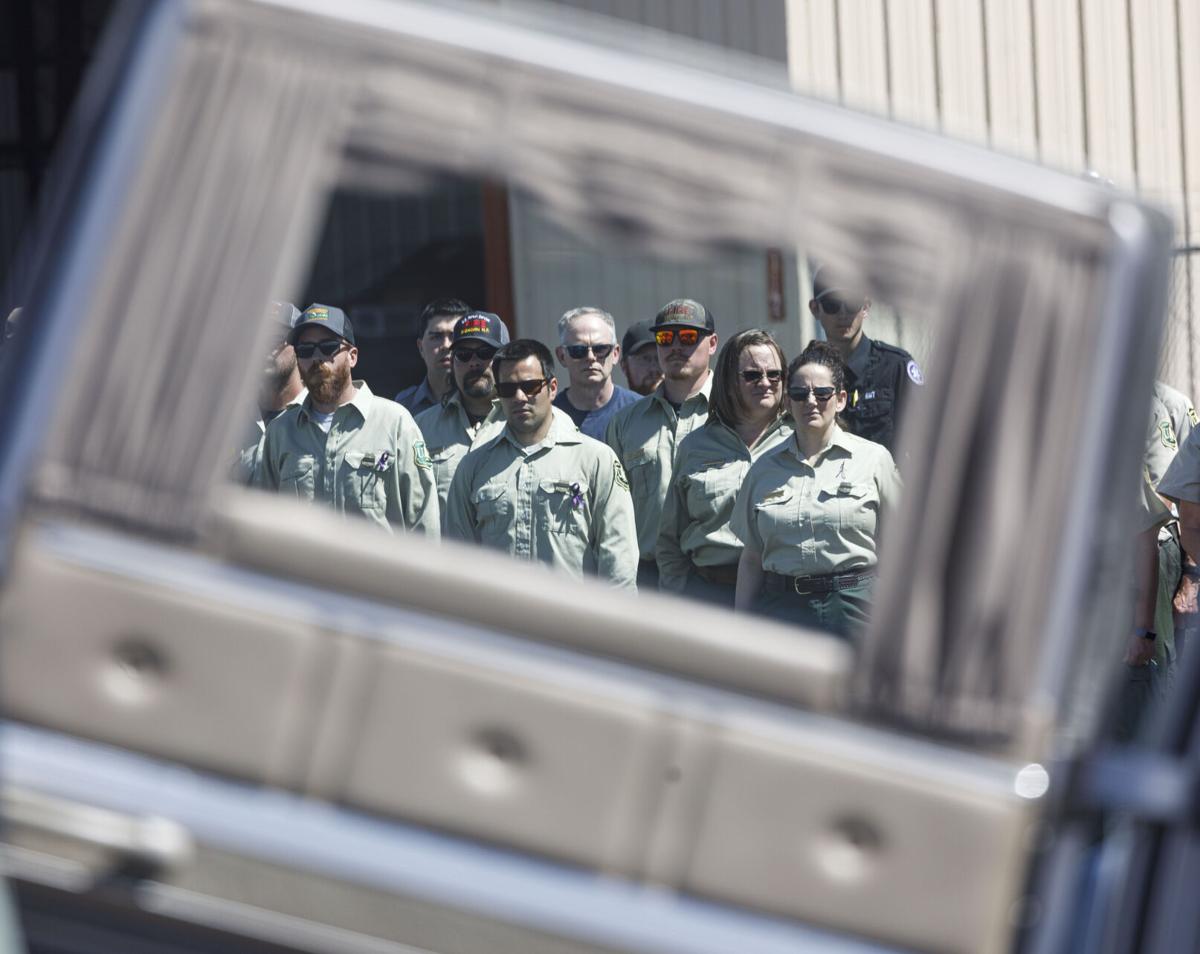 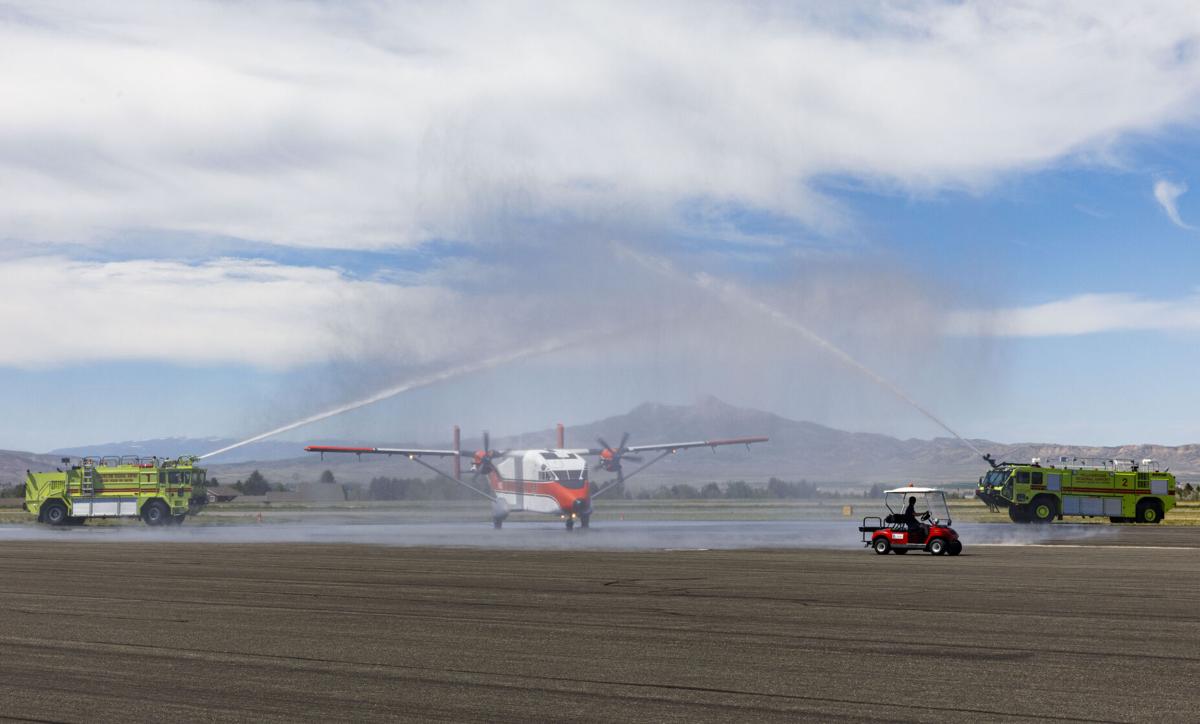 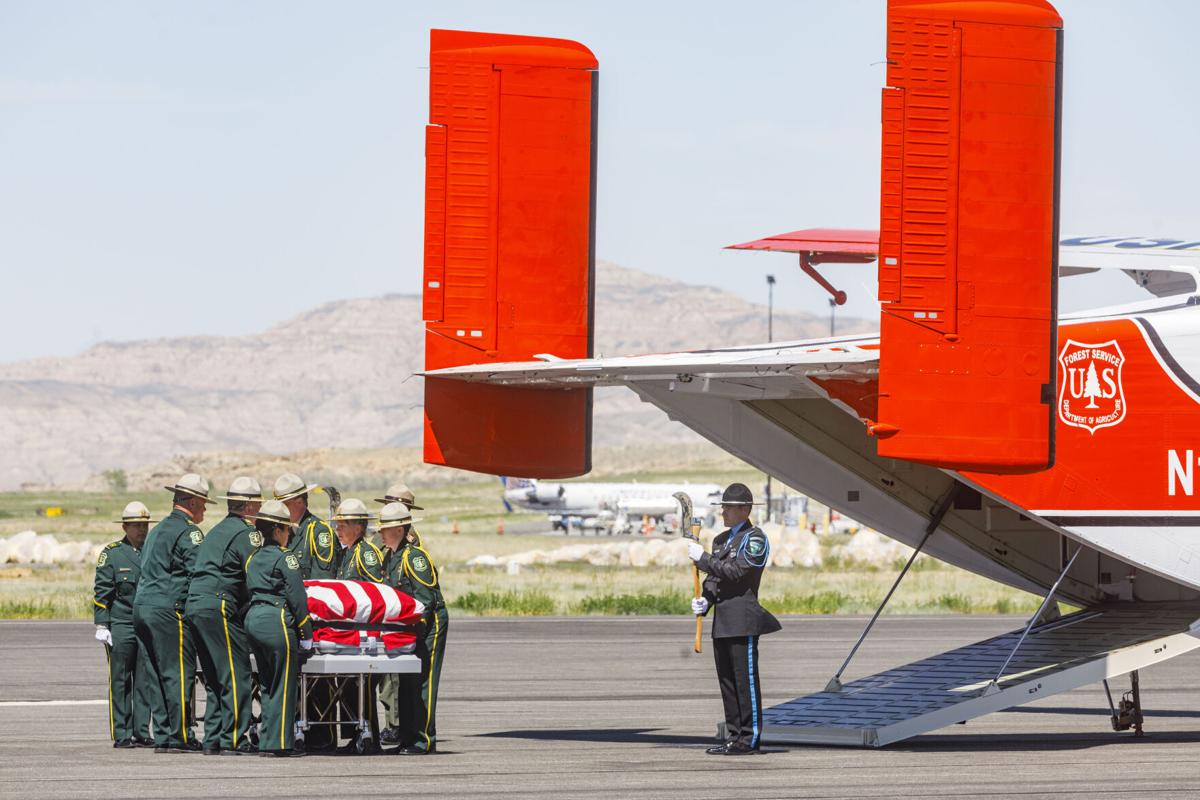 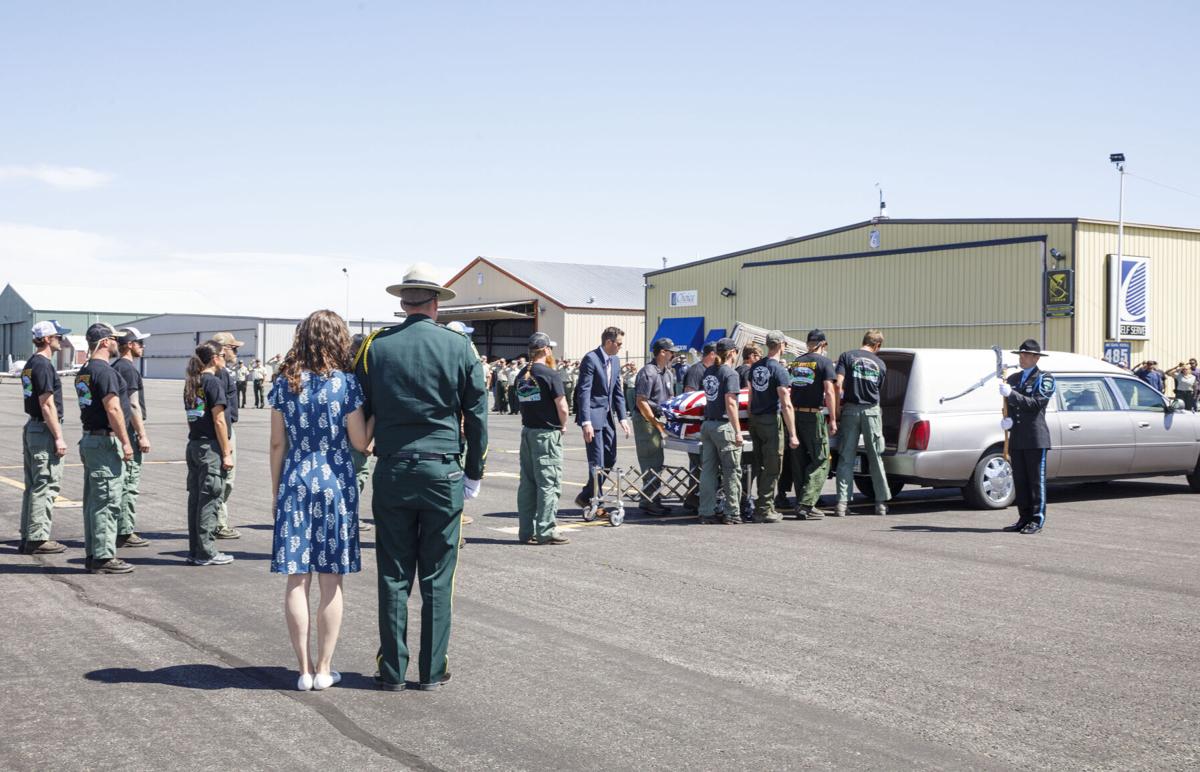 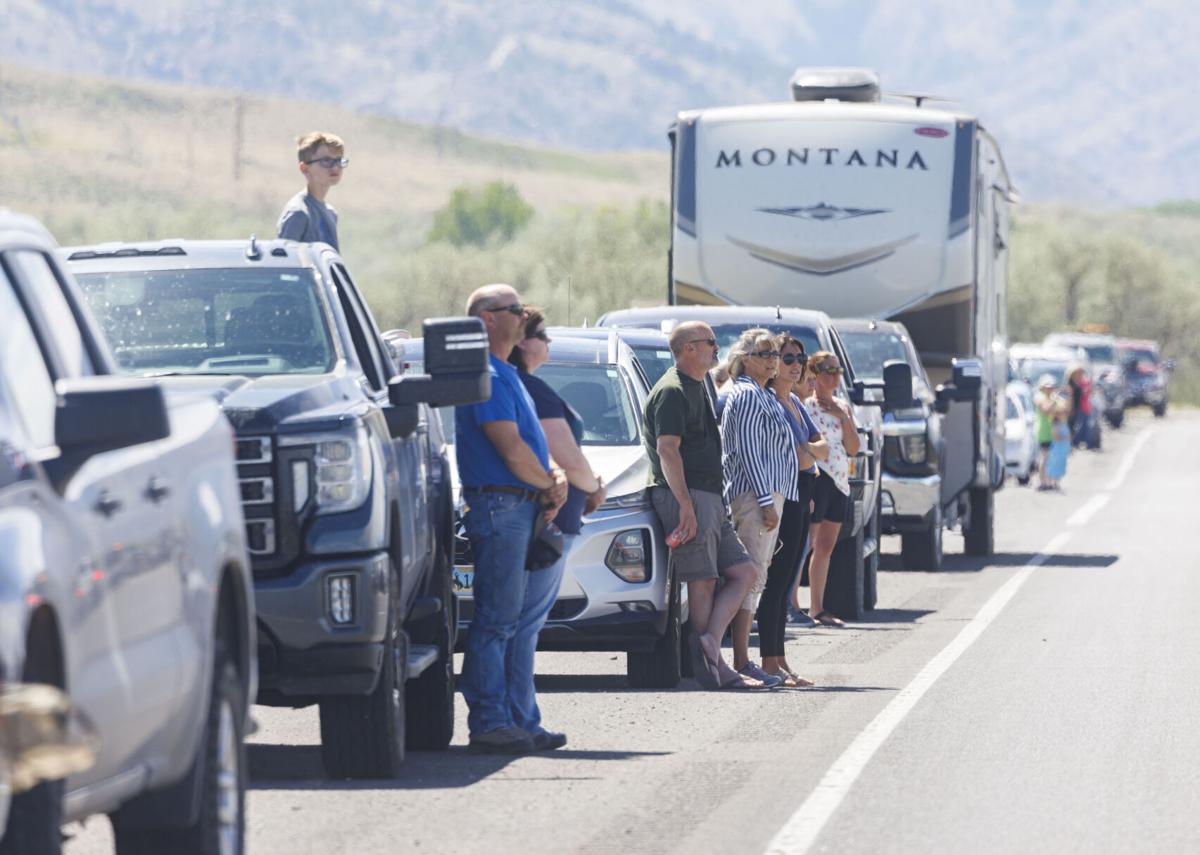 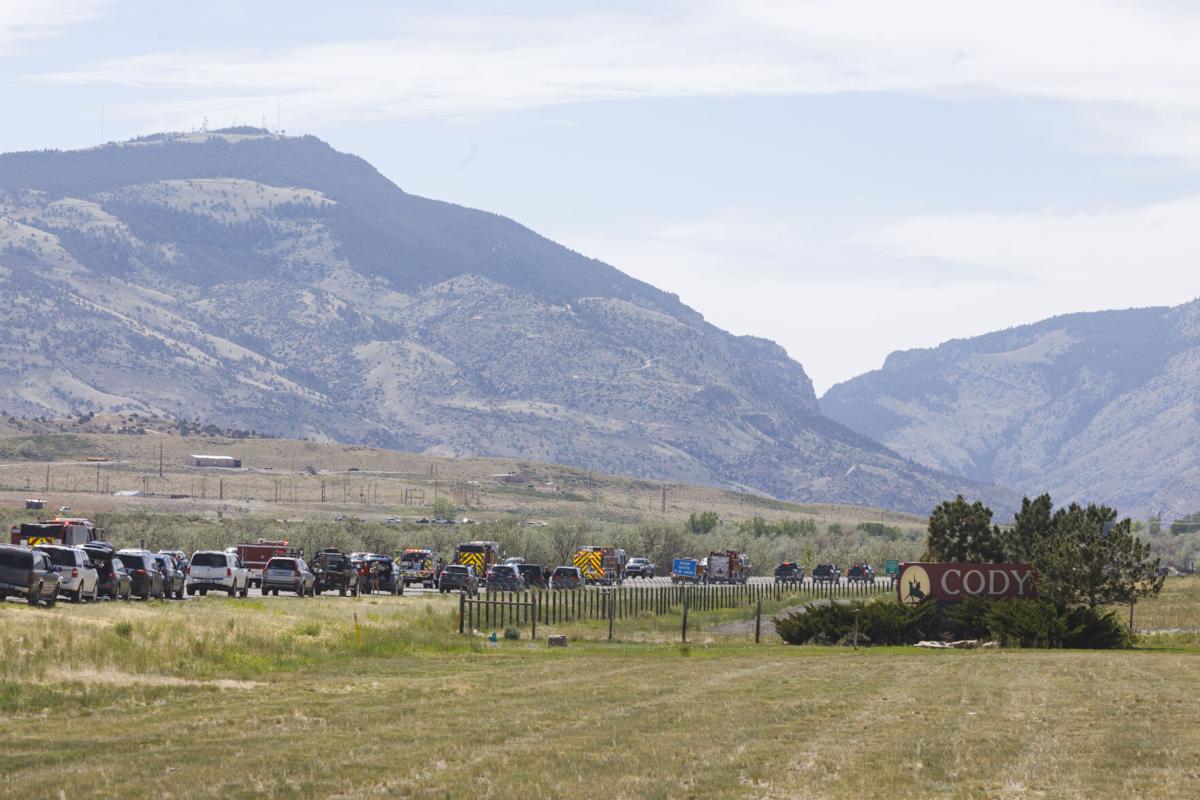 Hundreds of emergency responders and members of the community came out to honor fallen smokejumper Tim Hart in a funeral procession from Choice Aviation on Sunday, June 6th.

Hundreds of emergency responders and members of the community came out to honor fallen smokejumper Tim Hart in a funeral procession starting from Choice Aviation on Sunday, June 6th.

Hundreds of emergency responders and members of the community came out to honor fallen smokejumper Tim Hart in a funeral procession from Choice Aviation on Sunday, June 6th.

Cody smokejumper Tim Hart came home to a hero’s welcome on Sunday afternoon as hundreds turned out to honor his service.

Hart, 36, a member of the West Yellowstone Smokejumpers, died last Wednesday evening from injuries sustained while fighting a fire in southern New Mexico on May 24.

The commitment to putting oneself at risk in order to serve and protect others is an inherent responsibility for any emergency responder.

“It’s a fate as a crew that at any given time, one of us might not come home,” said Laura McConnell, a public information officer with the U.S. Forest Service.

Hart lived that responsibility to the fullest and for his work as a wildland firefighter and member of the West Yellowstone Smokejumpers, colleagues and community members made sure his sacrifice was not forgotten.

A ceremony was held at Yellowstone Regional Airport on Sunday afternoon honoring Hart, followed by a funeral procession through town to Ballard Funeral Home. A cordon of law enforcement officers stood by and followed in Hart’s wake.

A similar procession had been given to Hart upon his departure from El Paso, Texas, that morning, with the El Paso Fire Department flying a huge American flag from a fire truck in his honor.

His body was transported to the airport on a Forest Service Sherpa plane, the same aircraft that Hart jumped from when fighting fires.

The plane then stopped in Grand Junction, Colo. to refuel, and a small ceremony was also held to honor Hart there, before making the final flight to Cody.

Hundreds of emergency responders, U.S. Forest Service employees and members of the community turned out on Sunday to pay their respects to Hart. McConnell said when a member of these communities passes away, it causes a ripple of emotional impact across the spectrum.

“In the fire community it doesn’t matter what world you work in,” McConnell said. “For them it feels like you’re losing one of your immediate family.

The Forest Service Honor Guard was a fixture in the ceremonies. The Honor Guard pays tribute to Forest Service employees who have sacrificed their lives for the safety and security of national forests, employees and the public, at funerals and graveside services. Two guards, each bearing a fire axe, stood by on either side of the hearse as the casket was loaded into it.

McConnell said members of emergency response crews inherently build a familial-like bond, as this level of trust is required in order to do their jobs effectively.

Around 2:45 p.m. the white and orange Sherpa became visible flying overhead, making a sweeping arc around the airport before turning at Cedar Mountain for its final descent. An audible silence came over the audience watching from the tarmac.

As the plane came to a stop on the runway, two airport rapid response fire trucks let out simultaneous water arches, criss-crossing at the their apex to form a single arch. A northerly breeze blew a slight mist from the spray into the audience.

As the bagpipes sounded, Hart’s wife Michelle Hart was escorted by a Forest Service member across the tarmac. She and Hart married in late 2019. Their dog Dash was like a child to them, McConnell said.

“Tim was an incredible firefighter, a passionate mentor, and a loving husband, son, and friend,” the West Yellowstone Smokejumpers wrote on Hart’s GoFundMe page.

The Smokejumpers walked out in a double-file line to help bring Hart’s American flag-draped casket to the hearse. Michelle Hart requested that this and his transport by the Sherpa plane take place.

“This is his family,” said CJ Norvell, a public information officer for the Forest Service. “She loves those guys and they love her.”

Smokejumpers are considered some of the most advanced wildfire fighters, McConnell said. Their jobs involve parachuting into remote wildland fires and remaining in a self-sufficient state at the fire for days on end.

Hart graduated high school in the Chicago area. According to the Forest Service, in 2006 he began his wildland firefighting career on the Coconino National Forest and then went to the Fremont-Winema National Forest as an Engine Crew Member. In 2009, he joined the Shoshone National Forest as a Lead Forestry Technician on an engine and in 2010 was detailed to the Asheville Interagency Hotshot Crew as a Lead Firefighter.

Hart later worked for the BLM on the Ruby Mountain Hotshot Crew. He joined the smokejumper program in 2016 and relocated to Grangeville, Idaho, as a rookie. In 2019 his wildland firefighter journey took him to West Yellowstone as a Smokejumper Squad Leader and in 2020 as a spotter.

Photos of Hart show a consistently bearded man, small smile stretched across his face and a content look of composure at nearly all times.

“He will be remembered as the consummate smokejumper; smart, gritty, fun-loving and hardworking,” the West Yellowstone Smokejumpers wrote on his GoFundMe page. “Tim’s easy smile and subtle sense of humor made the days better for those around him. He will always be thought of with a great degree of fondness by folks who were fortunate enough to make his acquaintance.”

According to the Forest Service, Hart took a hard fall during a fire jump while fighting a fire located on private land in the Animas Mountains along the rugged Continental Divide in New Mexico. No other information is available as far as what led to the accident.

A procession of more than 25 emergency and Forest Service vehicles followed the hearse as it drove along US 14-16-20 East into town. Both sides of the road were filled with onlookers, some with signs.

“I am so impressed with this small town and their support for Michelle (Hart) and those people showing love,” Norvell said.

Cody resident Jenny Taylor, a member of a firefighter family, was one of the attendees.

“We’re all in the fire family,” she said.

Cody resident Dave Treick didn’t know Hart but still felt the need to pay his respects to the firefighter. Treick’s daughter was a hotshot with the Big Horn National Forest.

“Every time she would go on a fire you knew it was dangerous,” he said.

Hart’s GoFundMe page has already raised $111,834 for his cause as of Sunday evening. Around 1,100 people have donated, including a $2,500 contribution made by the National Smokejumper Association. To donate visit: gofundme.com/f/support-smokejumper-tim-hart-his-family.

Gov. Mark Gordon on Monday ordered flags at half staff Friday across the state to honor Hart.

His memorial service will be at 11 a.m. Saturday at Spike Vannoy Field.

RIP Thank you for your dedication and your ultimate sacrifice